By FatNicK July 2019 No Comments

A trip to a motorway service station was all it took for FatNicK to fall in love with Virtua Racing, but its appearance on the long-gone 32X was what sealed the deal.

There are times in life when it suddenly becomes apparent that something you thought you knew has been irreversibly changed. In early 1993, I had one of these moments in a service station on the corridor between London and Thanet. For the first time in my life, I encountered Virtua Racing in its native arcade form.

The route was one I knew well. My grandparents had moved to the coast a couple of years previously, so the London-Broadstairs drive was one we made about once a month, always stopping at Farthing Corner services along the way.

Though today, service station gaming areas are generally associated with seedy betting terminals, back in the early 90s it was arcade games that ruled the roost. When it came to Farthing Corner, these were consistently good ones too – The Simpsons, Mortal Kombat II, Virtua Fighter – meaning that my first encounters with each of these machines were inside the grubby walls of that under-appreciated motorway rest stops.

Of all the machines I encountered there, none would affect me quite as much as Virtua Racing. It wasn’t the first polygon-based racing game by any stretch – in fact, I’d already been enjoying the Spectrum port of Hard Drivin’ for a couple of years by that point.

However, Virtua Racing was the first to really join the dots and provide a completely three-dimensional game world. Where Hard Drivin’ gave you a 2D backdrop and a game world that was an endless expanse of green, Virtua Racing had you driving alongside a fully rendered and functional 3D theme park. 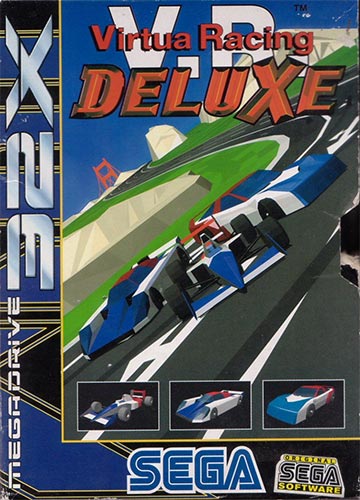 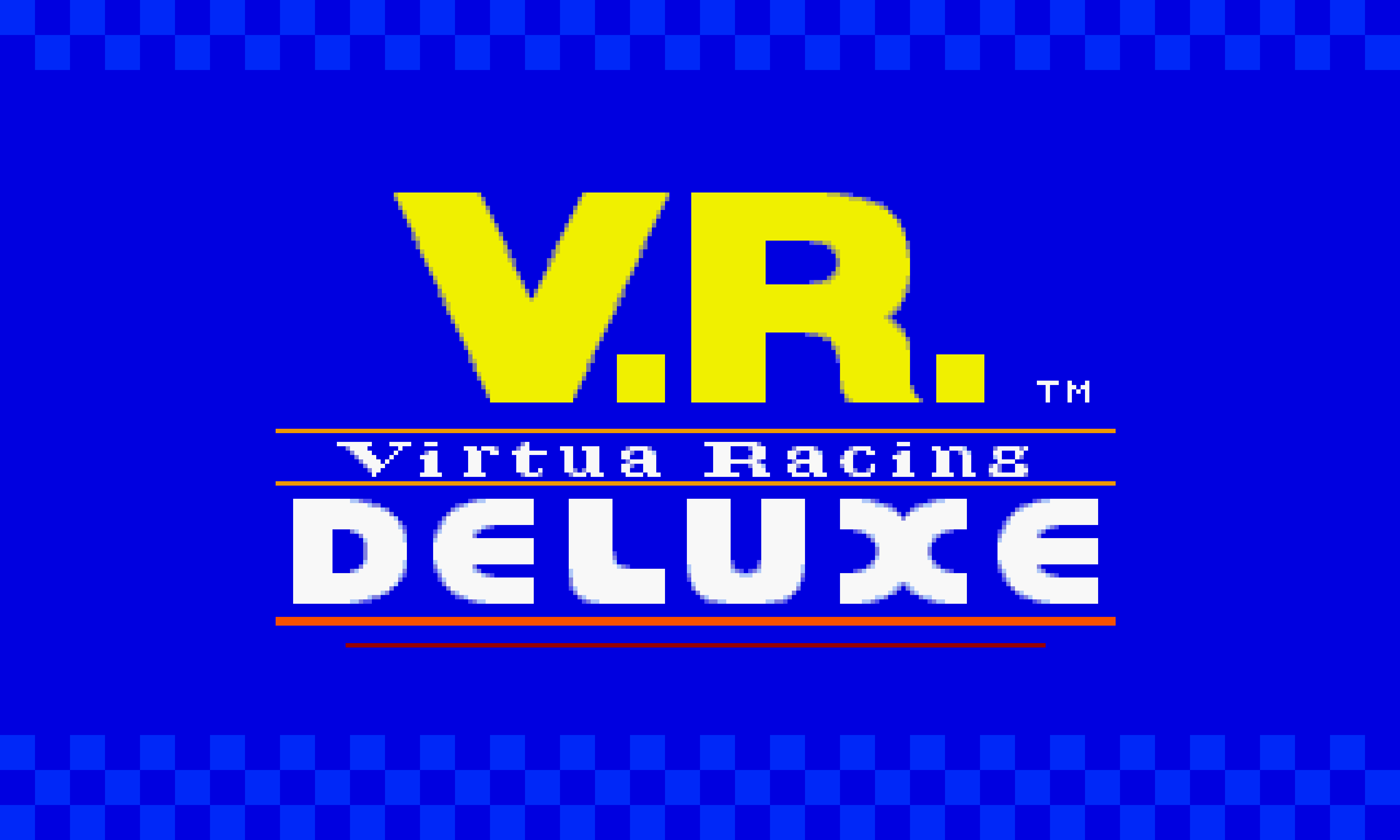 However, Virtua Racing was the first to really join the dots and provide a completely three-dimensional game world. Where Hard Drivin’ gave you a 2D backdrop and a game world that was an endless expanse of green, Virtua Racing had you driving alongside a fully rendered and functional 3D theme park.

As was generally the case with me and arcade games, I was inevitably crap at it to begin with. With only a few minutes until we had to be back on the road for real, my playtime was restricted to a single coin. As was also often the case, it managed to hook me all the same: the speed, incredible level of detail (it had a cockpit view that featured a fully working speedo!) and the pseudo-realistic handling all left me wanting more.

Surely there wouldn’t be a home version, though?

As it turned out, my chances of obtaining a home port were better than I expected. Though the eventual Mega Drive port – a £70 monster that contained a special co-processor chip to help with the 3D work – was far too expensive for me, Virtua Racing finally dropped into my lap when Father Christmas deposited a 32X under our tree during the Christmas of 1994.

It’s worth pointing out that, back in 1994, we generally didn’t expect ports to be perfect. We knew 2D arcade games were never going to have sprites that were as large or as colourful as the arcade originals, while anything that featured a lot of digital sound would inevitably have a good number of its samples cut.

When it came to 3D games… well, many of us were just happy for them to exist, to be honest. Though it’s pretty trendy to bash the 32X version of Doom today, at the time I was overjoyed with this cut-down (but still incredibly playable) port. 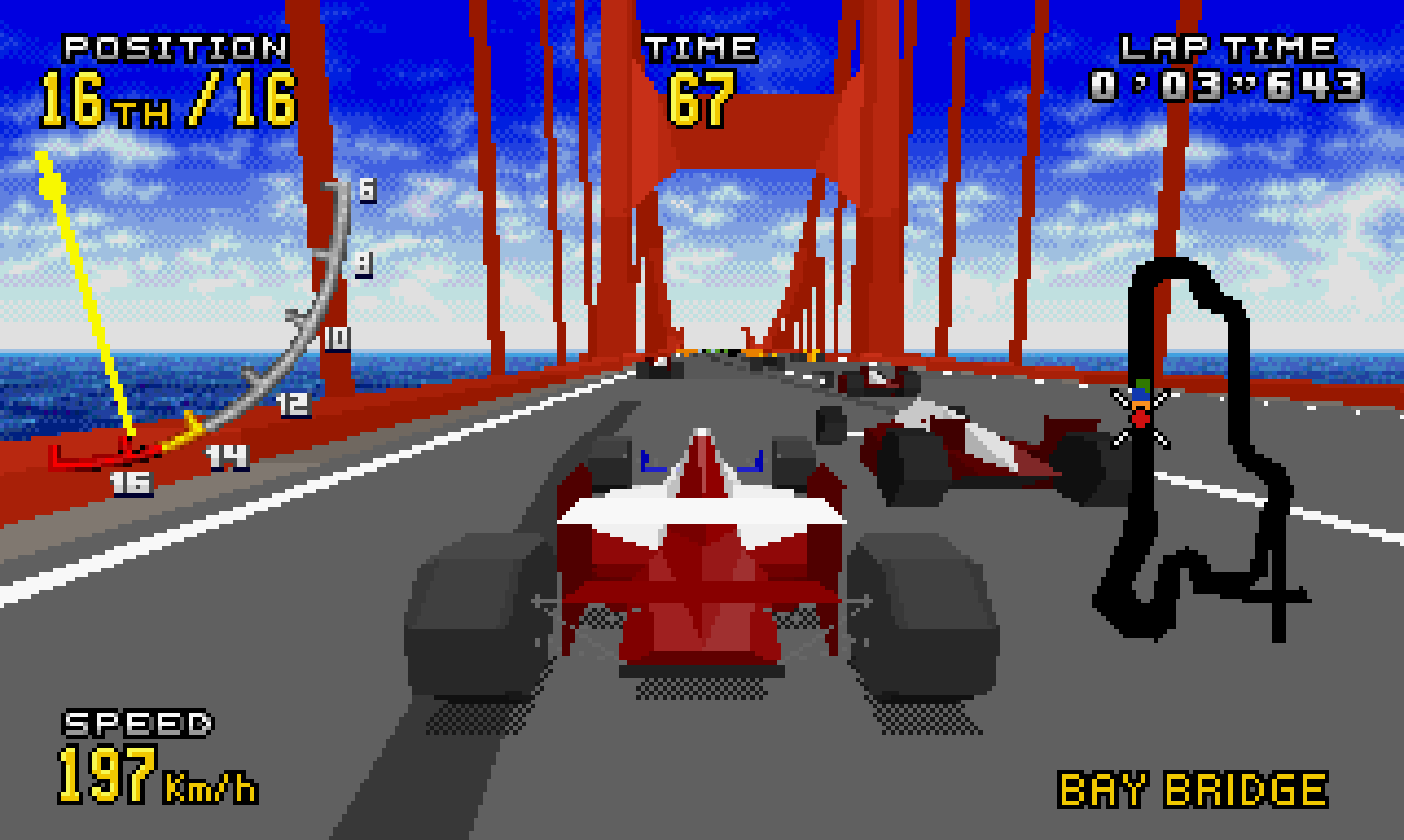 As impressive as Doom was, Virtua Racing on the 32X was something else. For a start, it wasn’t just plain old Virtua Racing, but Virtua Racing Deluxe. Where the original featured one car and three tracks, Deluxe upped this to three cars and five tracks. I was already ahead of the arcade original before I’d inserted the cart.

Of course, extra stuff doesn’t help if the game itself is rubbish. However, Deluxe seemed pretty much perfect. Admittedly, my memory of the original arcade had probably been fogged slightly by experiencing the slightly compromised Mega Drive version, but everything seemed exactly as I remembered it. The graphics were smoother and more detailed than on the Mega Drive, the car handled just as I remembered from the arcade and, crucially, it provided an experience close to how I imagined a racing car would probably drive. The theme park on the big forest stage seemed to be fully operational.

On top of that, the extras worked fantastically well to extend the core experience. The extreme speed of the Prototype and drifty handling of the stock car made a genuine difference to the way I had to approach each track, helping greatly to extend the game’s replayability.

While the new cars made the old tracks feel brand new again, the genuinely new ones included in Virtua Racing Deluxe felt like perfect extensions of the designs present in the original Virtua Racing, but blended elements of familiarity with some individual design challenges, such as the superb square corners found on the Highland course. 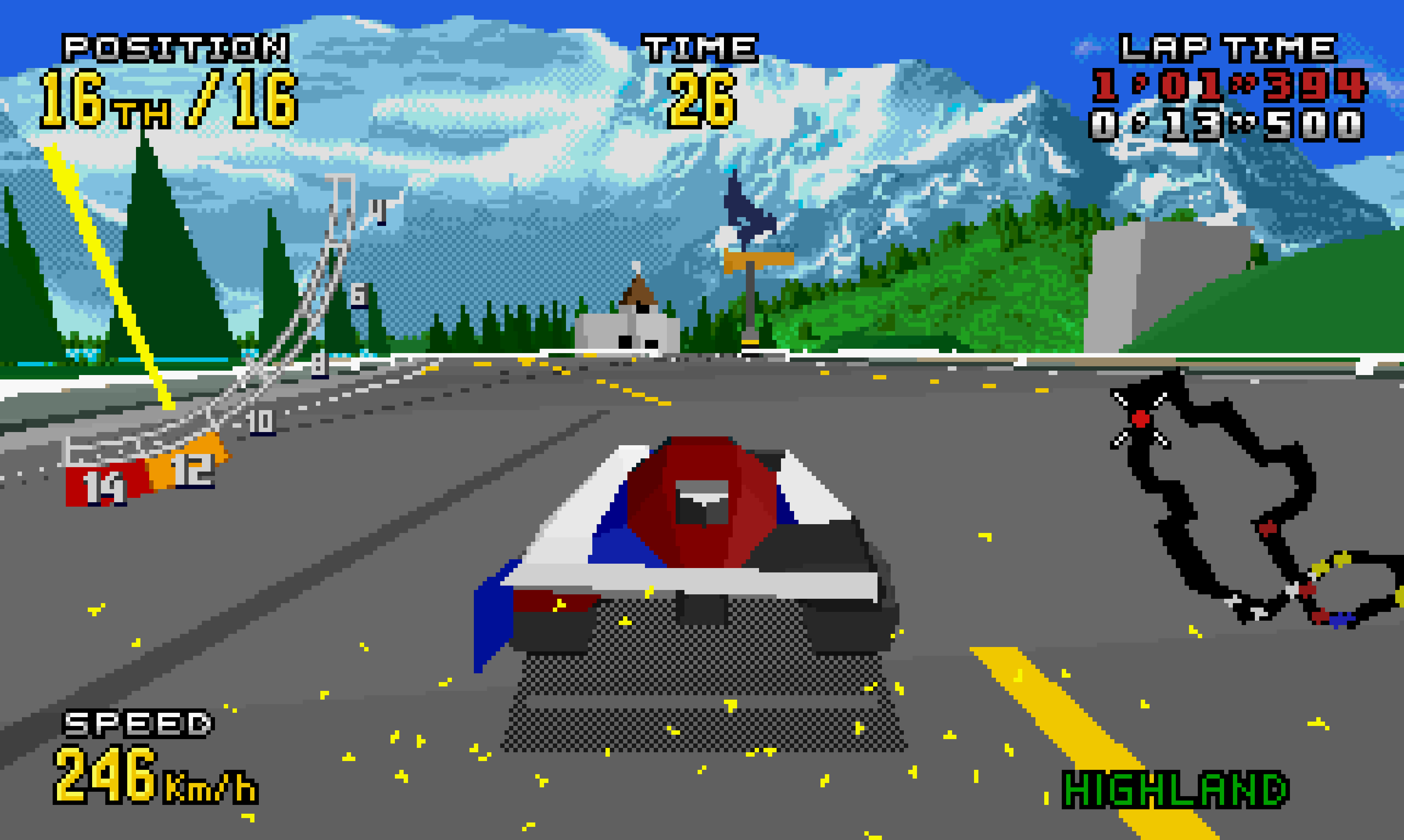 Virtua Racing Deluxe felt like the perfect port of the perfect arcade game. It was colourful, detailed and – unknowable to us at the time – so perfectly stylised it would age a lot better than the titles that would replace it.

Meanwhile, the gameplay balanced complexity against immediacy as skilfully as a professional driver managing their acceleration around a hairpin: it was immediate enough to provide a rewarding five-minute game, yet offered great things to any player who took the time to groove its tracks and uncover a deeper understanding of the vehicle handling.

Quarter of a minute

Indeed, even the music of Virtua Racing – which for me was initially the weakest aspect – grew on me over time. It’s not that it had bad tunes by any stretch of the imagination – the infectious “DO-DO-DOOO-DO-DO, DO-DO-DOOOO, DO-DO—DOOOO-DOOO-DOOO” of the options screen can stay in your head for weeks – it’s just that, well, there wasn’t enough of them.

Once you got into the game, each of the racing tracks had its own short intro music. You were then treated to one of five snippets at the beginning of each lap, then one of five snippets every time you hit a checkpoint. That was it. All the in-game cues were 15 seconds long, or less.

Looking back now, Virtua Racing’s soundtrack is phenomenally clever. Though it didn’t directly interact with the game in the same way as something like LucasArts’ iMUSE system, it provided a perfect accompaniment to the actions: each 15-second jazz-funk groove added a tremendous sense of energy or tension to the proceedings, before fading away to the atmospheric roar of engines: the real soundtrack to any motor race.

Consequently, there shouldn’t be that much to say about Virtua Racing Deluxe other than the fact it’s a completely brilliant game. You should really know about it already. In any just world, “Did you play Virtua Racing Deluxe?” would be the kind of question reserved for the sort of clickbait social media accounts that constantly ask whether you remember the original Super Mario Bros or Sonic the Hedgehog 2.

Unfortunately, the world isn’t just. Though the 32x had one of the best launch line-ups in history and sold reasonably well, Sega lost faith in the machine by the end of 1995 and brought it to a premature end, damaging the reputation of all the 32X’s exclusive software titles as a result. Worse still, Virtua Racing itself wasn’t a game that replicated well: on the Saturn, its flat polygons seemed dated and – outsourced to Time Warner – it didn’t play the same as the Sega original. 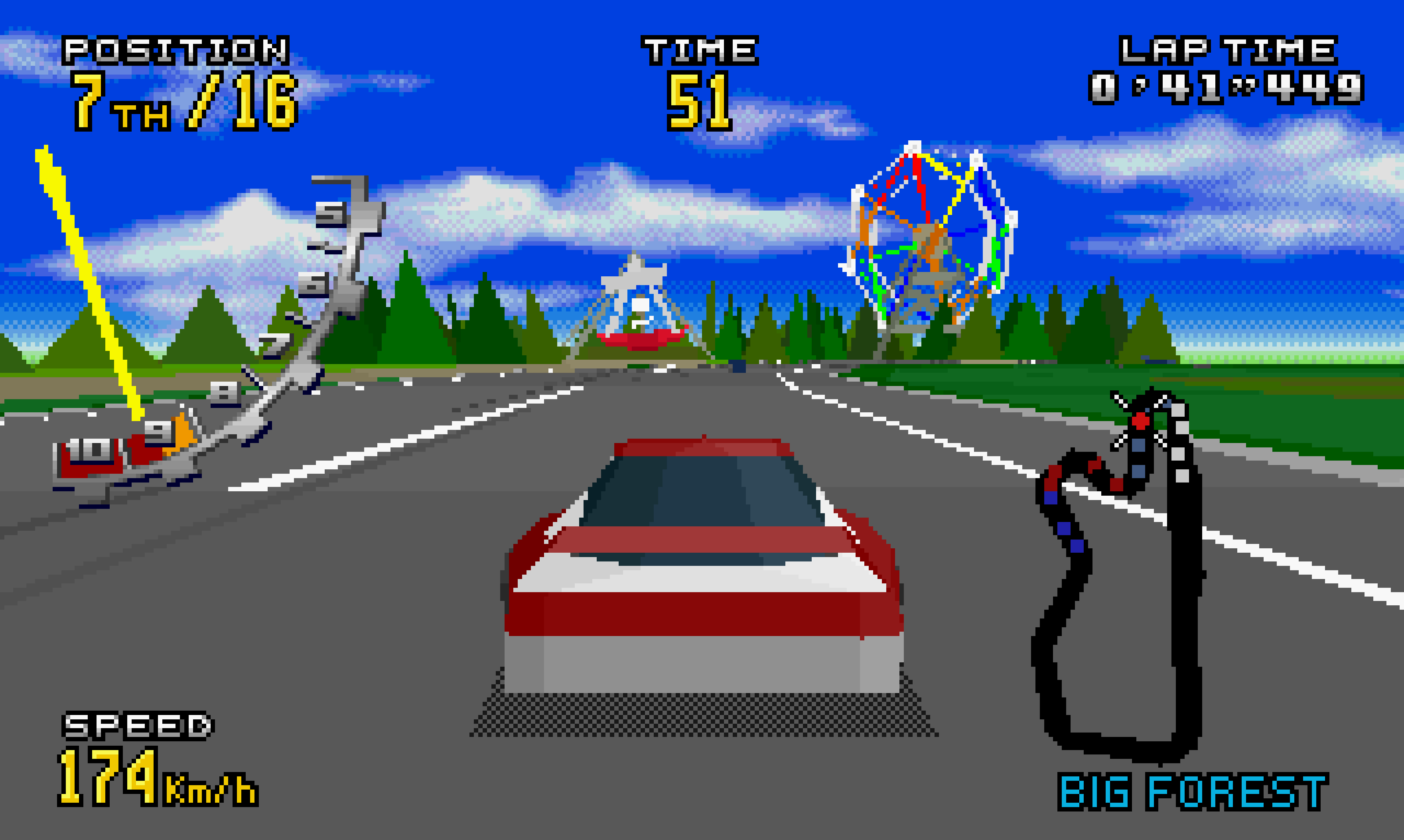 Though today, we live in an age where almost anything can be emulated, the Model 1 hardware that powered the original Virtua Racing machine was a complex setup that’s still beyond many low-end emulation solutions even now.

Thankfully, at least, there is a happy ending. Released for the Nintendo Switch recently, M2’s latest version of Virtua Racing is a perfect (perhaps better than perfect) recreation of the original arcade, which I can recommend to anyone who’s interested in trying out this classic Sega racer.

However, as good as M2’s port is, Virtua Racing Deluxe will always be the definitive version for me. It might not run at 60fps, it might not be in 1080p, but it’s the only title that allowed me to drift a stock car sideways past a polygonal theme park, and that’s the main thing for me.

As an arcade game based on forgotten hardware ported to a stigmatised and downtrodden console, Virtua Racing Deluxe shouldn’t be anywhere near as good as it is. For me, it’s the perfect package and will always be one of my defining gaming experiences.