By Gary Heneghan September 2020 No Comments

Despite some initial doubts, Gary Heneghan now believes WWF SmackDown! is the best wrestling game of all time.

When my mother was clearing out her loft a few years ago, she asked me to check some notepads I’d written in as a teenager. Any hopes I’d written a potentially award-winning novel were dashed when I saw my scribblings: it was just a list of WWF championship belts and tally charts.

I remembered what these meant straight away – they were my title reign histories for WWF SmackDown!. I’d played the Season Mode so far into the future, the game itself had lost track.

I also recalled my storied history with WWF SmackDown! – from not liking it at first, to buying a copy for each of the first three PlayStations. How did the colourful, if scruffy, WWF debut from Yuke’s capture my imagination so strongly?

When WWF SmackDown! came out in 2000, the WWF was riding high and wrestling was at a peak in popularity. Yet while The Rock, Stone Cold, and HHH were facing their toughest opponents, I was facing mine: my Maths GCSE. That was the biggest obstacle in my life. I needed a C to pass and get into Sixth Form.

I don’t remember how I heard about SmackDown!. All I remember was telling myself I’d get through my GCSEs and then treat myself to “that new wrestling game”. My love affair with WCW vs the World had faded. I wanted the exciting WWF product I saw on Sunday Night Heat every week, not WCW vs the World’s solid but awkward technical wrestling. 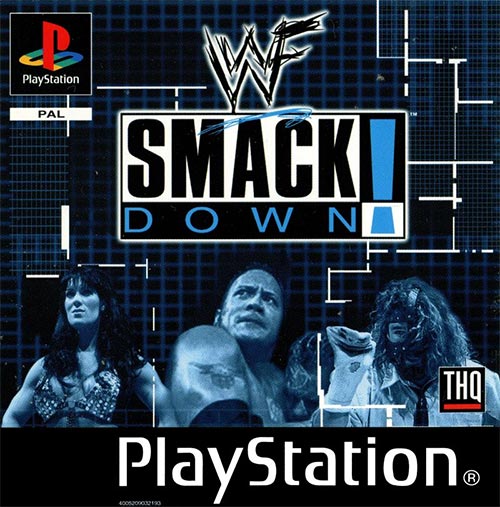 The idiot that I am, I bought SmackDown! before my GCSEs ended. I exercised some discipline and only dabbled with it during my final studies. I don’t even remember playing it much; my first memory of SmackDown! was feeling intimidated by the loud character select screen. Being able to choose how many finishers you could start also threw me. I’d been trained by WCW vs the World to earn them; surely starting with a finisher was cheating?

No chance in hell

I managed to pass my GCSEs, including that troublesome maths test – only by one or two marks. I felt the same way football fans do when their club survives a relegation battle on the last day of the season; admittedly, I didn’t invade any pitches, but you get my point.

With a future of slacking in Sixth Form secured, it was time to play WWF SmackDown! properly. My first real plunge was a season mode with Bubba Ray Dudley on easy difficulty. I’d picked Bubba Ray as, by this point in the middle of 2000, he and D’Von Dudley were table-breaking badasses. 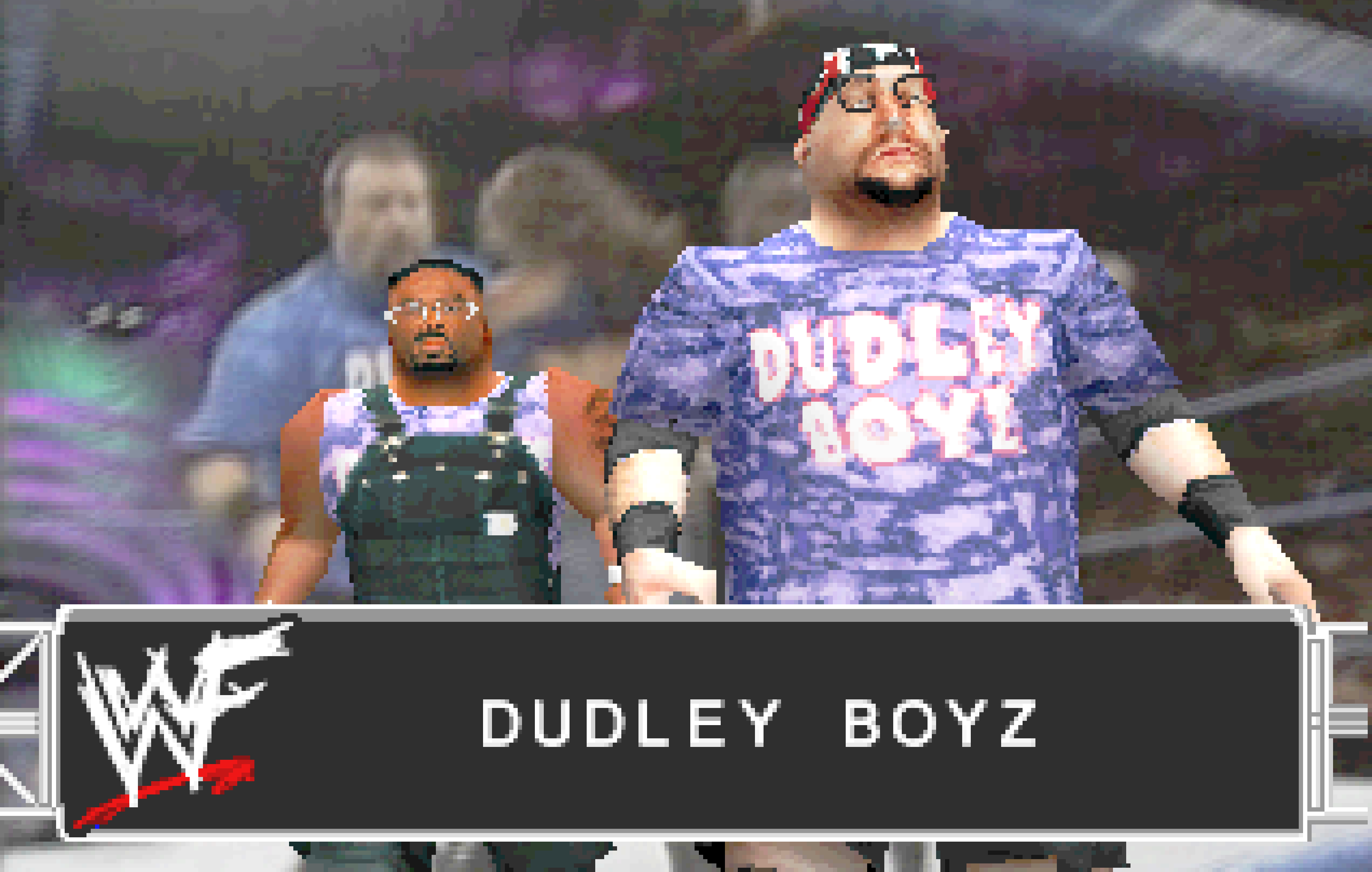 However, Bubba was still in his 1999 debut attire, not the classic Dudley camouflage. Furthermore, SmackDown! was way too easy – I was beating everyone with a generic powerbomb in a few minutes.

I hated SmackDown! at this point. My inner wrestling snob though it was laughable how quickly wrestlers got up after taking a move. I was convinced I’d bought a lemon. Compared to WCW vs the World or its N64 cousins, SmackDown! seemed primitive and cartoony.

Time to play the game

What ended up saving WWF SmackDown! was my discovery of Pre-Season Mode, as well as Create a Superstar. With the difficulty level ramped up, and the ability to make my own wrestlers, I fell in love. Pre-Season Mode granted a year’s worth of matches, designed to give your custom grappler some defining attributes.

All wrestlers on SmackDown! had unique skills. By playing through Pre-Season Mode, you could get your own: maybe a fierce rivalry with Triple H, a long-standing knee injury, or my personal favourite, an alliance with Mark Henry. I can’t count the number of times Sexual Chocolate slid into the ring as I was about to win a match, just to make sure I was OK. 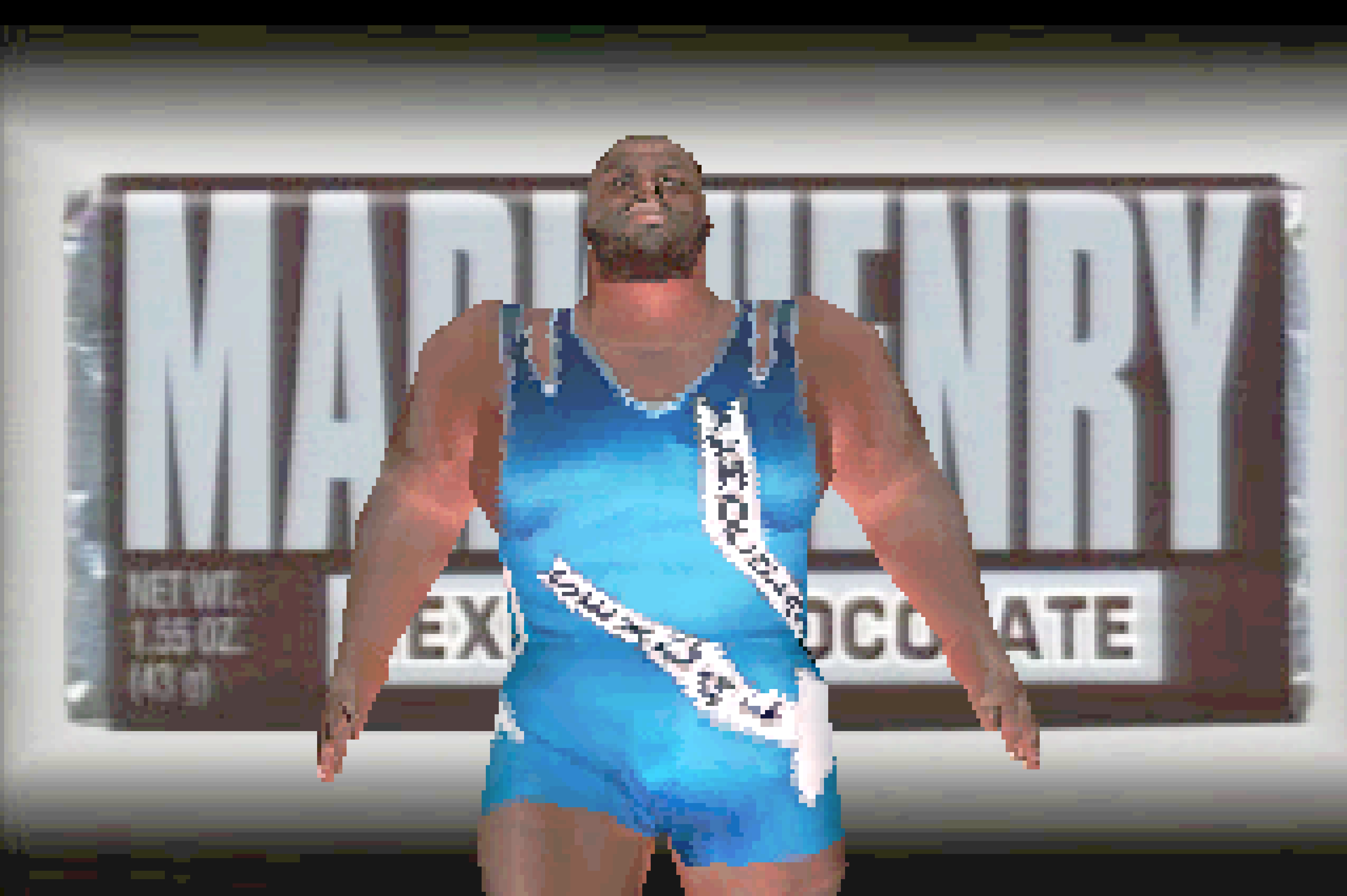 After completing this year-long campaign, it was on to the regular Season Mode. This was where I fell in love. It offered a never-ending experience where wrestlers were ranked; each ranking decided which titles you could go for, and I became obsessed with this system. The aim was always getting into the top five so you could compete for the WWF Championship title. However, I loved trying to win, and hold, the Intercontinental and European titles too.

Each month had one event, so you had to wait with baited breath to see what your match was. Would you be trying to add to your belts, or would you have to defend the titles you had? I remember groaning when WWF SmackDown! made you defend titles in its chaotic Fatal Four Way matches; many a time, my heart sank when I had to defend my WWF title against The Undertaker, Big Show and Steve Austin. That said, anything was better than the cutscenes. Watching two mid-carders having a pointless chat for a minute between loading breaks was painful.

Luckily, my created wrestlers were always up to the task of defending the gold. I had many great newcomers, but two stood out. The first was 667, a war veteran who was cruel and sadistic in the ring. He may have looked like Jeff Jarrett with facial hair and fatigues, but 667 was a beast. Top rope dropkicks, sharpshooters, double-underhook backbreakers… 667 could wrestle any style and beat anyone. 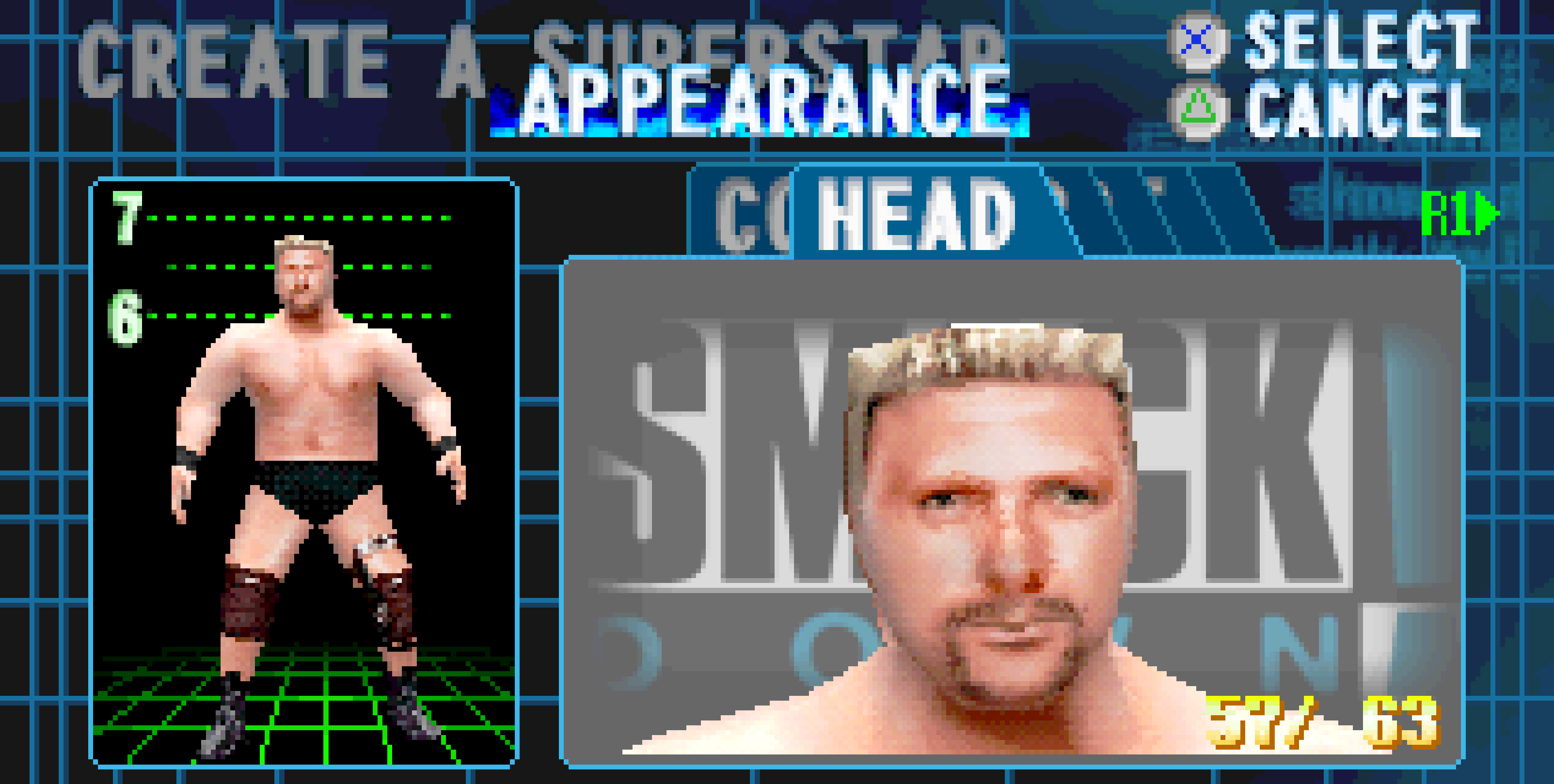 My other favourite creation was El Loco, a luchador exiled from his native Mexico for being a) too dangerous and b) being covered in crap tattoos. I gave him every ridiculous, high-flying move I could – the speed of SmackDown! made aerial attacks an absolute joy. In some games, getting to the top rope was an arduous task. Not SmackDown!… you could be on the top turnbuckle in seconds, opening up an array of moonsaults and splashes to smash foes with.

Both of these characters had the most devastating move in the game: Turn Facing Front! You’d simply sneak up behind an opponent and spin them round. The opponent would be stunned, allowing you to hit them with any move you wanted. Watching all 6’10” of The Undertaker, left helpless by this fairly gentle move, was always a giggle. Still, Turn Facing Front was one of the main reasons I ended up recording my wrestlers on the tally charts.

The only thing that stopped my WWF SmackDown! obsession was upgrading to the PS2, leaving it behind. 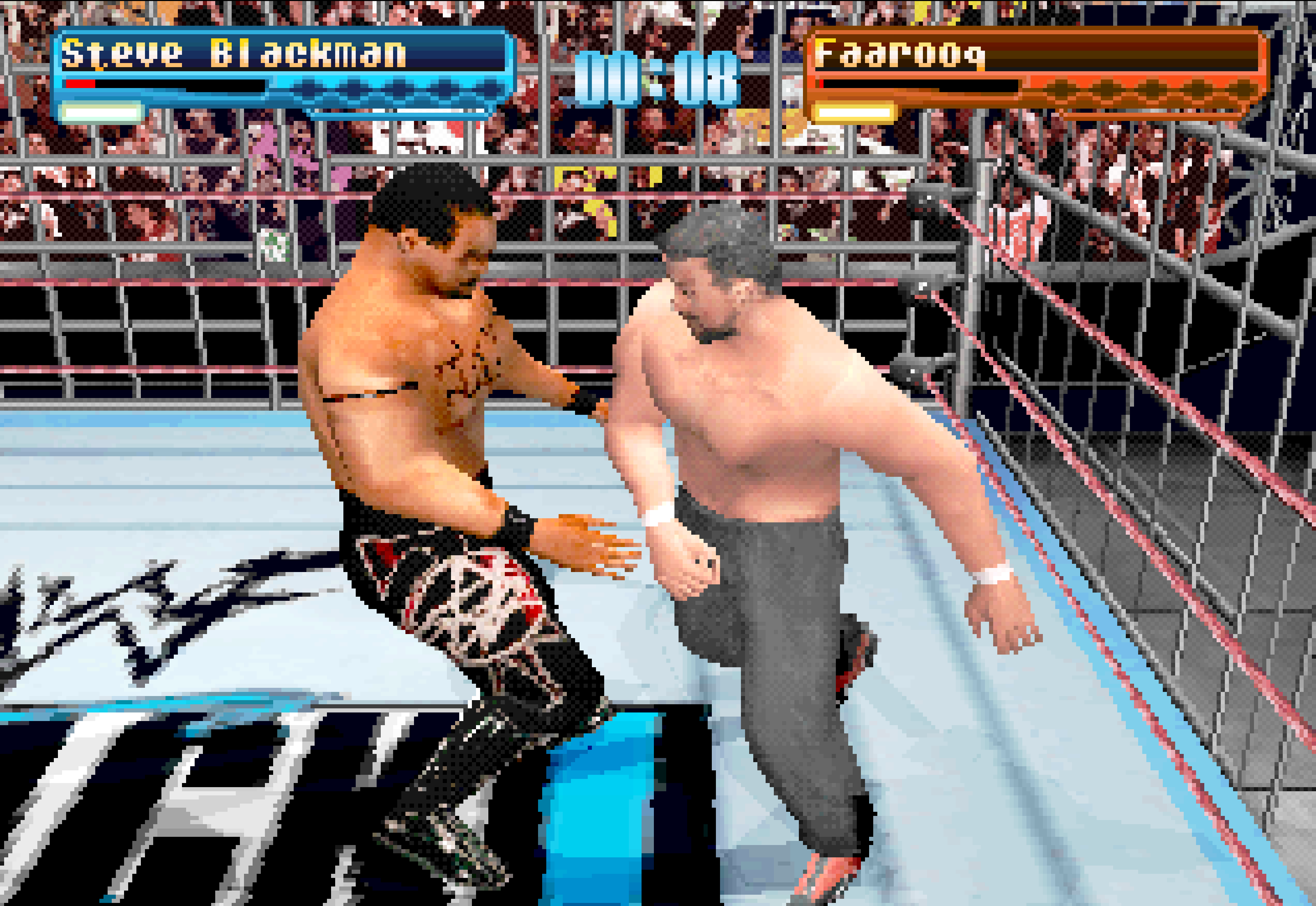 With most games, you quickly forget them after upgrading consoles. Not WWF SmackDown!. After being disappointed with the PS2’s WWF SmackDown!: Just Bring It, I took advantage of the PS2’s backwards compatibility and bought the original SmackDown! and a bright orange PS1 memory card.

I wasn’t sure if I’d made a nostalgic mistake at first – but I soon got sucked back into it. Until Here Comes The Pain came out, WWF SmackDown! was my go-to wrestling game. I relived it all, even giving 667 and El Loco another chance to dominate the WWF.

Once Here Comes The Pain arrived and I moved to the Xbox 360, SmackDown! was traded in and forgotten about. Years later, when I got my PS3, SmackDown! was one of my first purchases – a French version, from a local retro game shop. It was a fun last run through one of my favourites, before moving to the PS4 a few months later.

WWF SmackDown! is, in my opinion, one of the best wrestling games ever. Yes, it’s a glorified beta, rushed out before SmackDown! 2. Yes, its Create a Superstar mode has fewer options than a vegan steakhouse. Yes, the menu translations are less accurate than a British weather report. However, the gameplay is incredible.

Wrestling games should be about winning matches and titles, and I’ve never played one that focused as much on this as WWF SmackDown!. It’s something sorely missing by modern wrestling games.