WCW vs the World

By Gary Heneghan May 2019 No Comments

Before laying his hands on WCW vs the World, Gary Heneghan was a wrestling game philistine…

The 80s and 90s were, in hindsight, a tough time to be a fan of wrestling games, as a lot of the titles we had to put up with was pretty bad. Forget the arcade greatness of WWF Wrestlefest: at home we had to deal with the likes of WWF Super Wrestlemania on the Mega Drive, WWF Superstars on the Game Boy and WWF Steel Cage Challenge on the Master System. These games were limited even back then, but we made do because it was all we had.

I stopped watching wrestling in 1994 and, along with it, no longer bothered with wrestling games. Like most early 90s fans, I told myself I’d grown out of it and instead moved onto the much more mature Beavis and Butthead. On consoles, football games occupied my time instead, and I forgot about my love of grappling and the associated titles that came with it.

Fast forward to 1998 and wrestling was starting to get big again. I asked a friend what was going on and he invited me around to watch the new Attitude-era WWF. I fell in love again, particularly during the triple threat cage match between Ken Shamrock, Mankind and The Rock at WWF Breakdown. My friend mentioned that a new WWF game was out and my interest level went through the roof: WWF Warzone, as it turned out to be, looked amazing. Having played it at my friend’s house, I added it straight onto the Christmas list.

Problem was, Warzone was all style no substance. It was far too easy, meaning I was able to build a daft 78-2 winning record with Goldust. Both losses were silly count-outs, because I was messing around outside the ring out of boredom. However, I’d seen an advert for another wrestling game and became transfixed with it. It featured a Crow-like figure on the front and even promised wrestling leagues. That game was WCW vs the World. 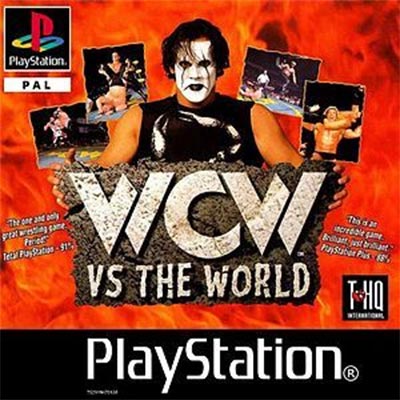 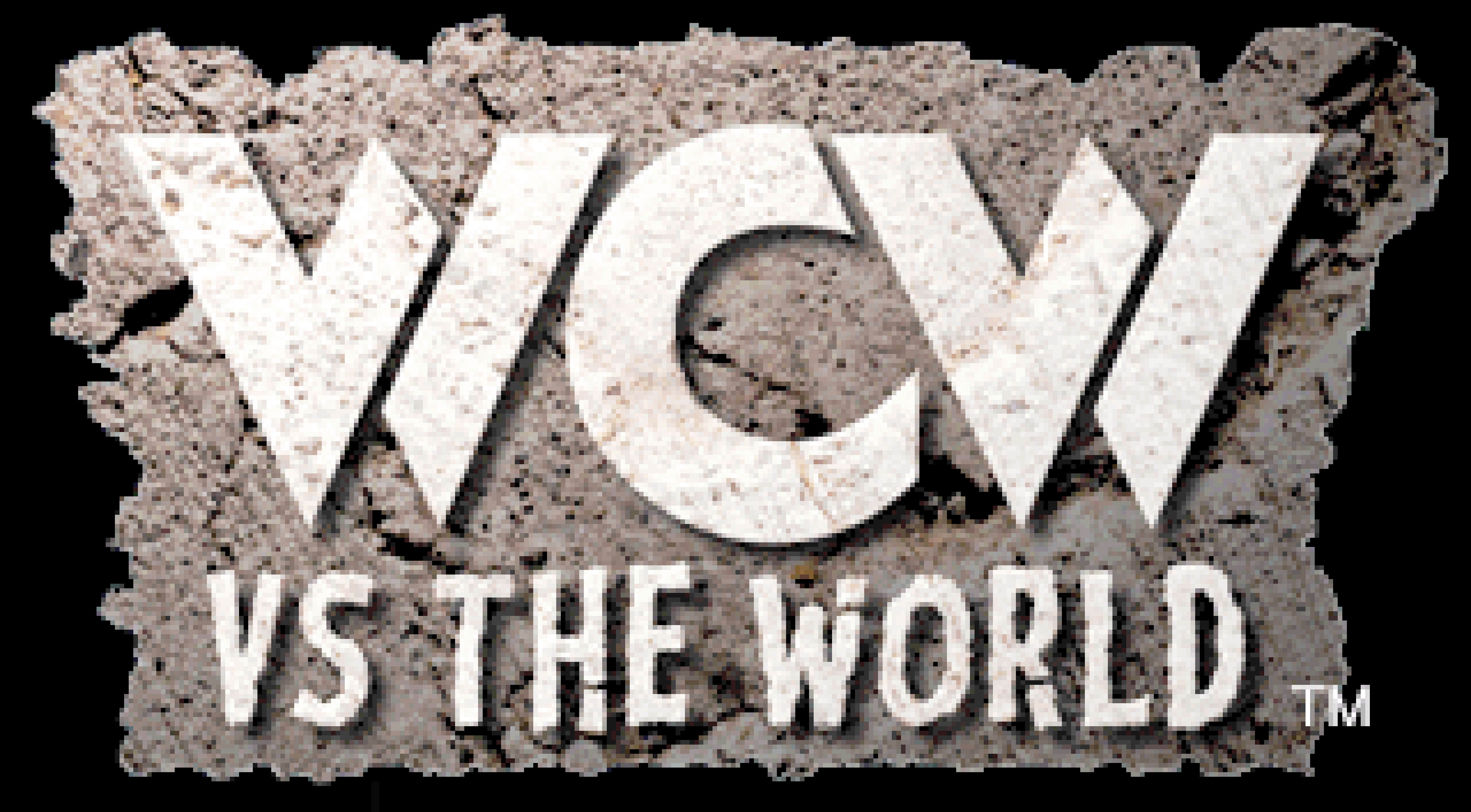 I was a big WCW fan in the early 90s, partially because I’d watch any wrestling going – a trait that still rings true – but mainly because my mum couldn’t afford Sky, and they showed WCW on terrestrial TV. However, I was really out of the loop with WCW and had no idea what was going on. When I went to research the matter (covertly reading magazines in WHSmith is research, right?) I knew I had to have the game. Hulk Hogan was a bad guy, while Sting was the Crow-like avenger, hunting him down. The game became a birthday essential.

My memory clearly plays tricks on me now… I could have sworn that WCW vs the World was new out when I bought it in 1999, but Wikipedia claims it was Christmas 1997. Still, 30 notes later and I was playing WCW vs the World at home, admiring the wide range of unique moves and its massive roster.

The game’s name was no lie: WCW vs the World featured 51 wrestlers from around the globe. Some were WCW stars like Hulk Hogan, Ric Flair, The Giant and Steven Regal. The others were a mix of made-up wrestlers who looked a bit familiar. Bad Blood, a favourite of my non-wrestling fan cousin, looked a little like Great Muta and had a headbutt of doom to the balls of his opponent, accompanied by a bell ringing sound with each strike south of the border. Even my novice wrestling knowledge knew Kapuna was based on All Japan Pro Wrestling’s Toshiaki Kawada. 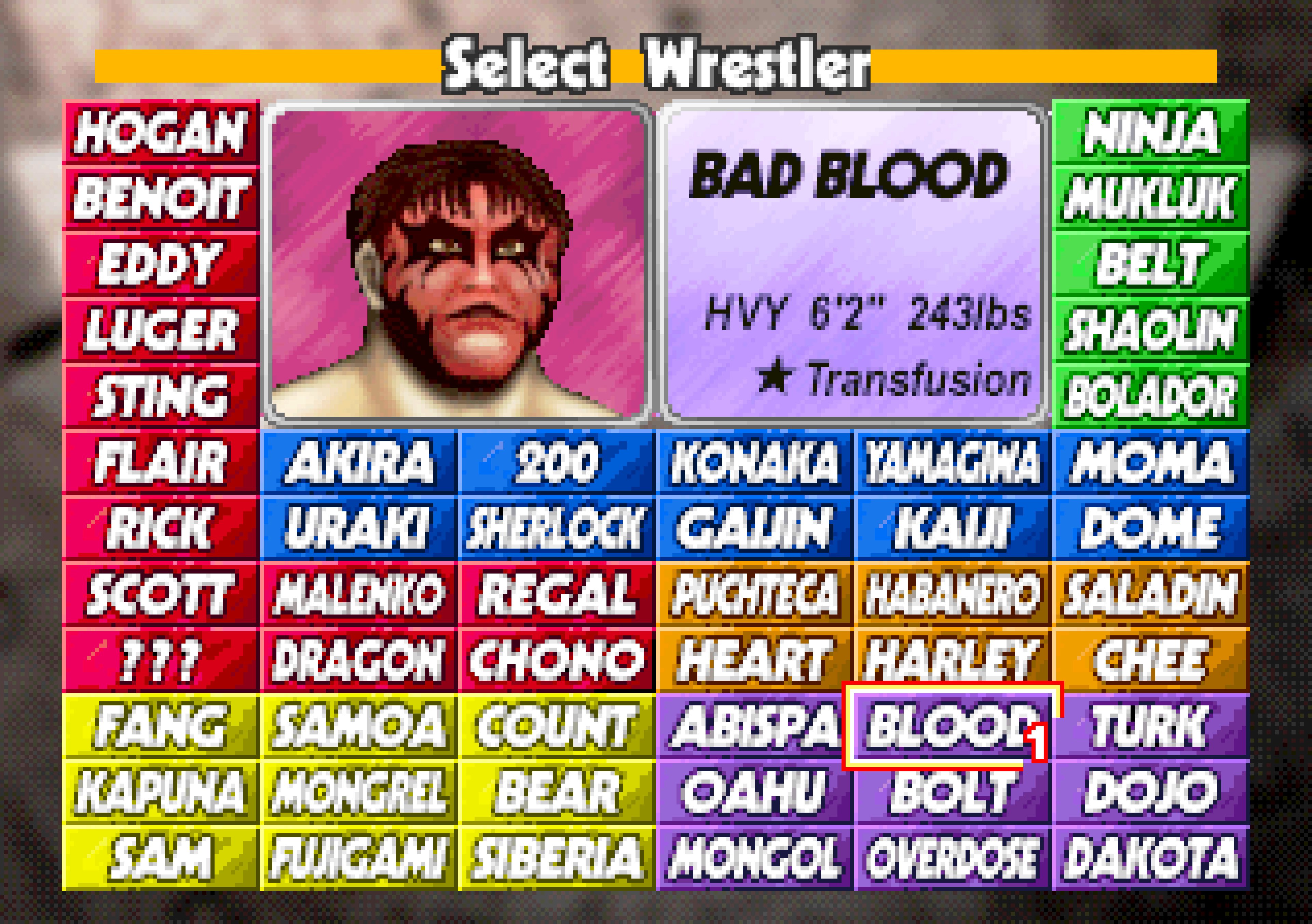 This suspicion followed me into the league mode. League was the wrong way to describe it, really: each league was just a series of matches where the final match was a title bout against a hidden character. I smashed through these modes, finding some new favourite characters. A wrestler called Black Ninja (an expy of Great Sasuke) caught my attention straight away, as I’d spent my childhood playing Sega games full of ninjas.

I found myself giving Black Ninja a back story: he was an orphan, raised by other ninjas in New York, and had to avenge his parents’ deaths by winning the Independent Union title. I’m still not sure how that last part works out, but it did and I loved my quest to win the IU. After I succeeded, I took Black Ninja around the world to fight all comers. Usually losing. Still, my attachment to the character was established; I’d always pick him on WCW/NWO World Tour and even downloaded him on Fire Pro Wrestling World to battle Shaolin, Paco Loco and the rest of the IU roster. 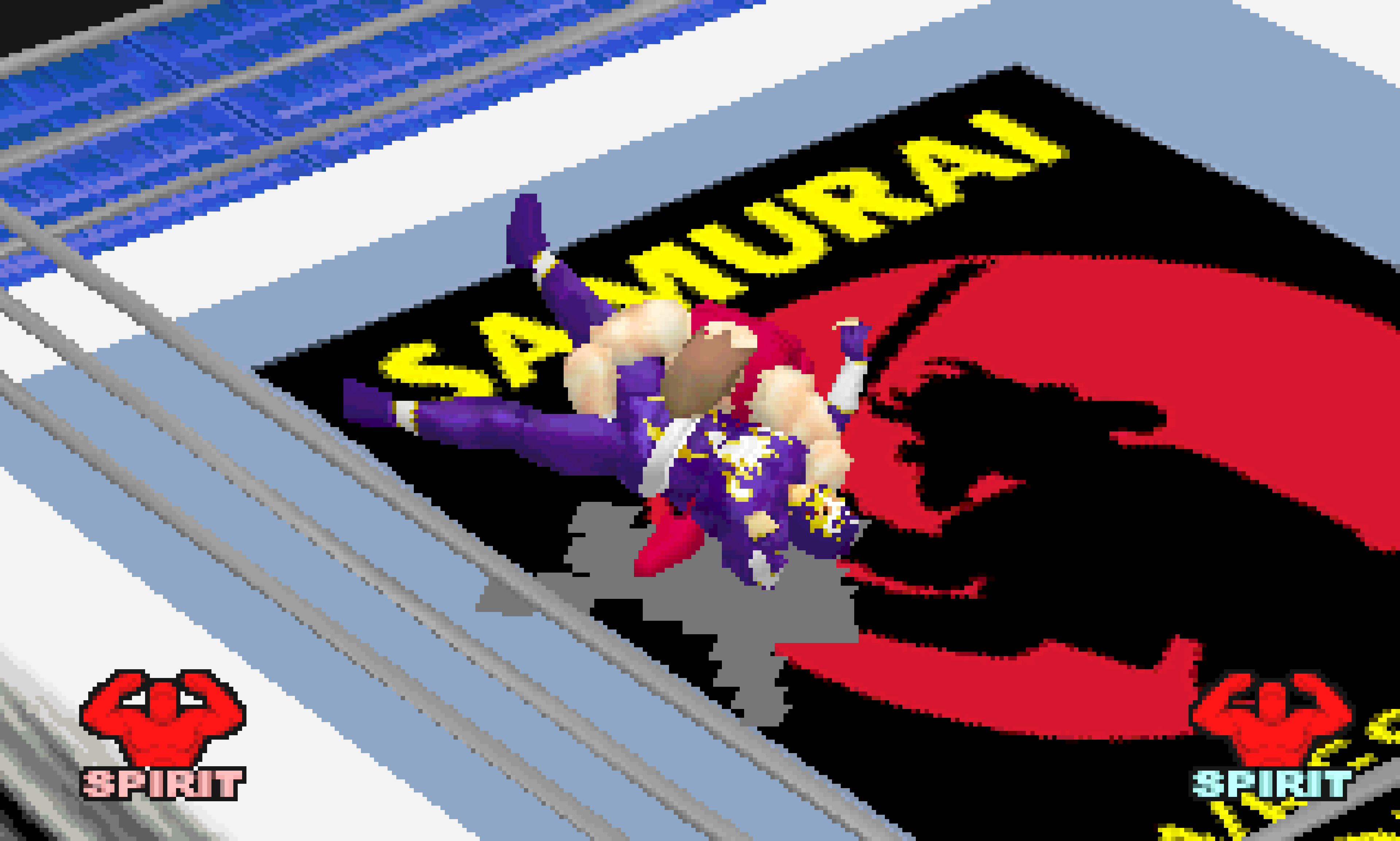 After beating every league to win all the titles and unlockable wrestlers, WCW vs the World surprised me by still holding my attention. The friend who got me back into wrestling was interested in it, too, so I took it round and got him into it – returning the favour that he did for me with WWF Warzone.

We had some hard-fought battles, notably based around his ability to duck when I tried to grapple him after knocking him down. This ducking skill was the bane of my life – I couldn’t use my powerful grapples at all and was beaten handily. I did manage to restore my supremacy by winning with honour, pride and a fortunate ability to dodge plancha dives out of the ring. A count-out win is still a win, right?

In a taste of my wrestling gaming to come, I started playing out my own story lines on WCW vs the World. I’d reimagine Sting’s transformation from blond, colourful good guy to moody vigilante. I’d pick NWO Hogan, put the difficulty down to easy, then batter old-school Sting into unconsciousness. Once Sting had been destroyed I’d then go back and select Crow Sting and destroy Hogan, hitting him with repeated Stinger Splashes and Scorpion Deathlocks… you know, like what should of happened at Starrcade 97. 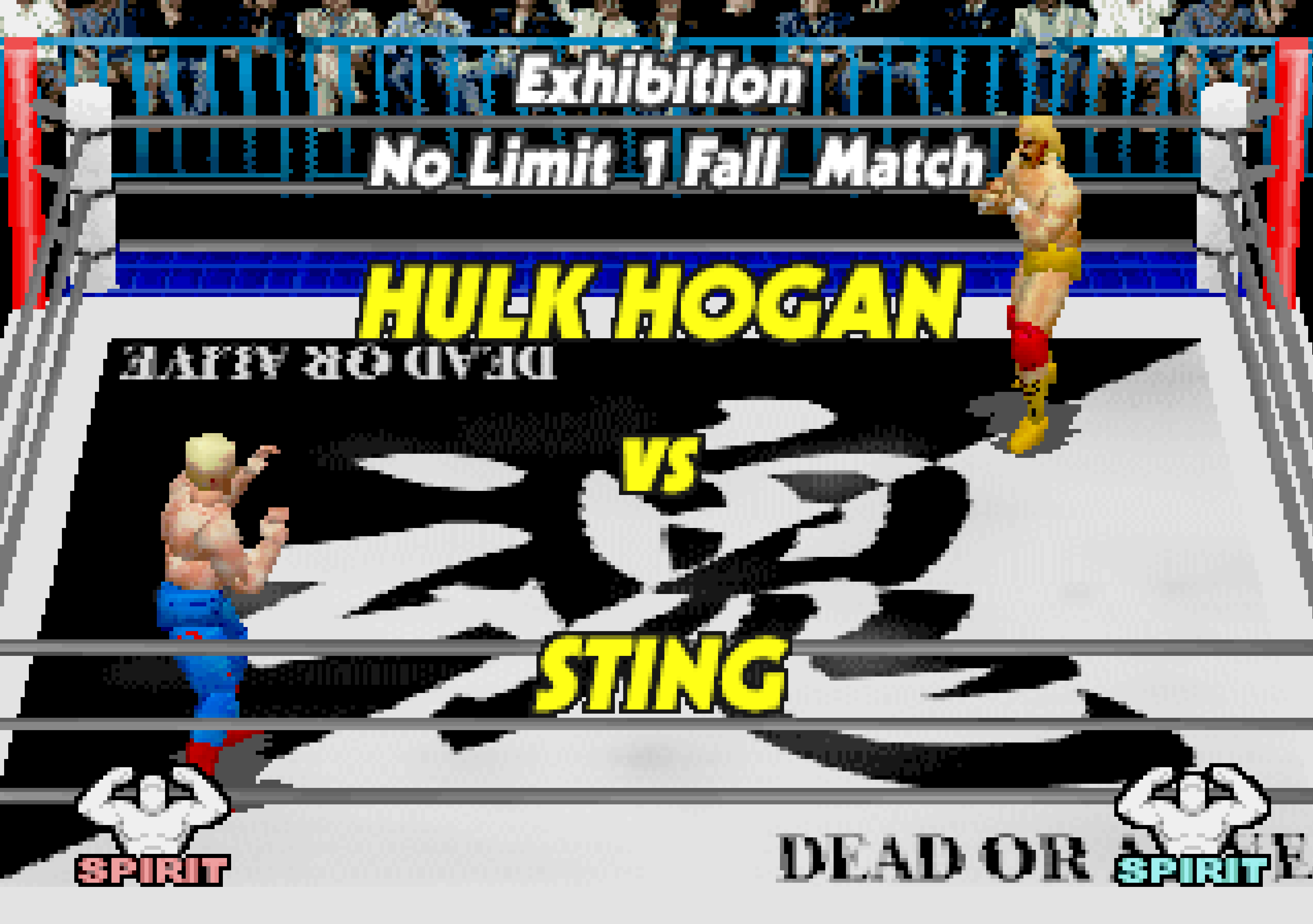 Getting too old for wrestling… again

Eventually, I outgrew WCW vs the World. I remember the exact moment, too. In St Helens’ market, there was a game store and they were running the demo mode of WCW vs nWo: World Tour on its N64. At first, it looked the same as WCW vs the World and I wasn’t too bothered. Then I saw the wrestlers fight on the ring apron and was blown away. I wanted ring aprons, damnit!

It’s hard to believe that a game I loved fell out of favour so easily. However, the lack of options and modes had weighed on my mind for some time. Seeing the N64 game in motion ruined WCW vs the World, and I soon moved on to the Smackdown! games. It was a sad end for a title that brought me so much joy, but it was great while it lasted.

It’s been surpassed and relegated to the annals of time, but WCW vs the World is a very important game to me. It sparked an interest in Japanese wrestling and took me away from the dreadful Acclaim wrestling games. WCW vs the World made me realise that wrestling games could be high quality – a revelation that led me through the N64 AKI games and onto Fire Pro Wrestling, which I’ll always be grateful for.