Ever since he first played Urban Chaos nearly 20 years ago, Marco Giuliani has developed a deep fondness for the underrated third-person adventure – and he’s still hoping for a sequel.

Believe it or not, there was a time in the not-so-distant past when games weren’t readily available. Much like what you would do in the survival games of now, you had to go out of your way and search for them. Since internet access wasn’t as ubiquitous in the 90s as it is today, you basically had to pray to the Hoarding Gods that you didn’t just spend your weekly allowance on a dud. And believe me, this happened to me more often than I would like to admit.

Occasionally, my hoarding instincts led me to something truly remarkable, like Command & Conquer: Tiberian Sun, MDK2 or Giants: Citizen Kabuto. But occasionally, I’d stumble upon something that marked me for life, and one of those games was Urban Chaos. I found it while I was browsing through my uncle’s collection of nondescript pirated CDs and, weirdly enough, it became one of the benchmarks by which I measure all games.

Keep in mind, this was early 2000s Romania, and if you were unlucky enough to be a gamer in that period, you had only two options: the improvised booths that sold overpriced pirated games, or that friend who somehow owned a CD burner.

Well, OK, you could buy games in retail stores, but there were other things to consider, like the economy, or living in freaking Eastern Europe. Unless you were picked up from school in a helicopter, chances are you owned a non-pirated game. You had to be super rich, is what I’m saying. Sorry, I’m getting sidetracked. 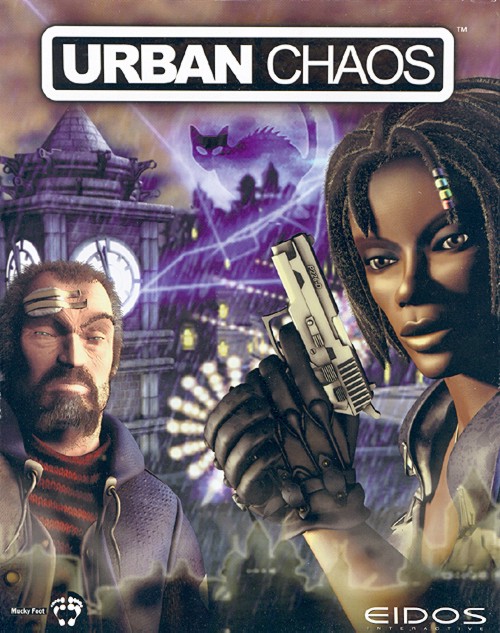 Let’s get one thing out of the way: this may not be the game you’re all probably thinking about. Its namesake Riot Response was a passable, but forgettable first-person shooter, while Urban Chaos was a semi-open-world action-adventure where you played as a rookie female African-American police officer. Remember, this game came out in 1999, during the advent of nu-metal, so it wasn’t the most progressive era in the history of entertainment, to put it politely.

Revisiting Urban Chaos as an adult is… an interesting experience, to say the least. Usually, I try to avoid replaying things I liked as a kid because it spoils the good memories I had of them. Case in point, my fondness for Tim Burton’s Batman has decreased with each subsequent rewatch to a point where if I were to watch it again, there’s a great chance I’d start hating it.

Fortunately, this wasn’t the case for Urban Chaos. In fact, replaying Urban Chaos instilled me with a newfound respect and appreciation for the devs and what they were trying to achieve. As a kid, I took the game as it was: an entertaining third-person adventure that filled my gloomy, late-autumn weekends. As an adult with a reasonable amount of experience in playing and writing about video games, I view games not only as mere escapism, but as the fruit of someone else’s labour and love for the craft.

The plot is exactly what you’d expect from a 90s buddy-cop film. The story revolves around D’arci Stern, a sassy rookie cop in her early 20s who decided to become a police officer after her father was killed in the line of duty. Nothing out of the ordinary, or so you would say until the game starts throwing variations of every end-of-the-millennium conspiracy theory imaginable. 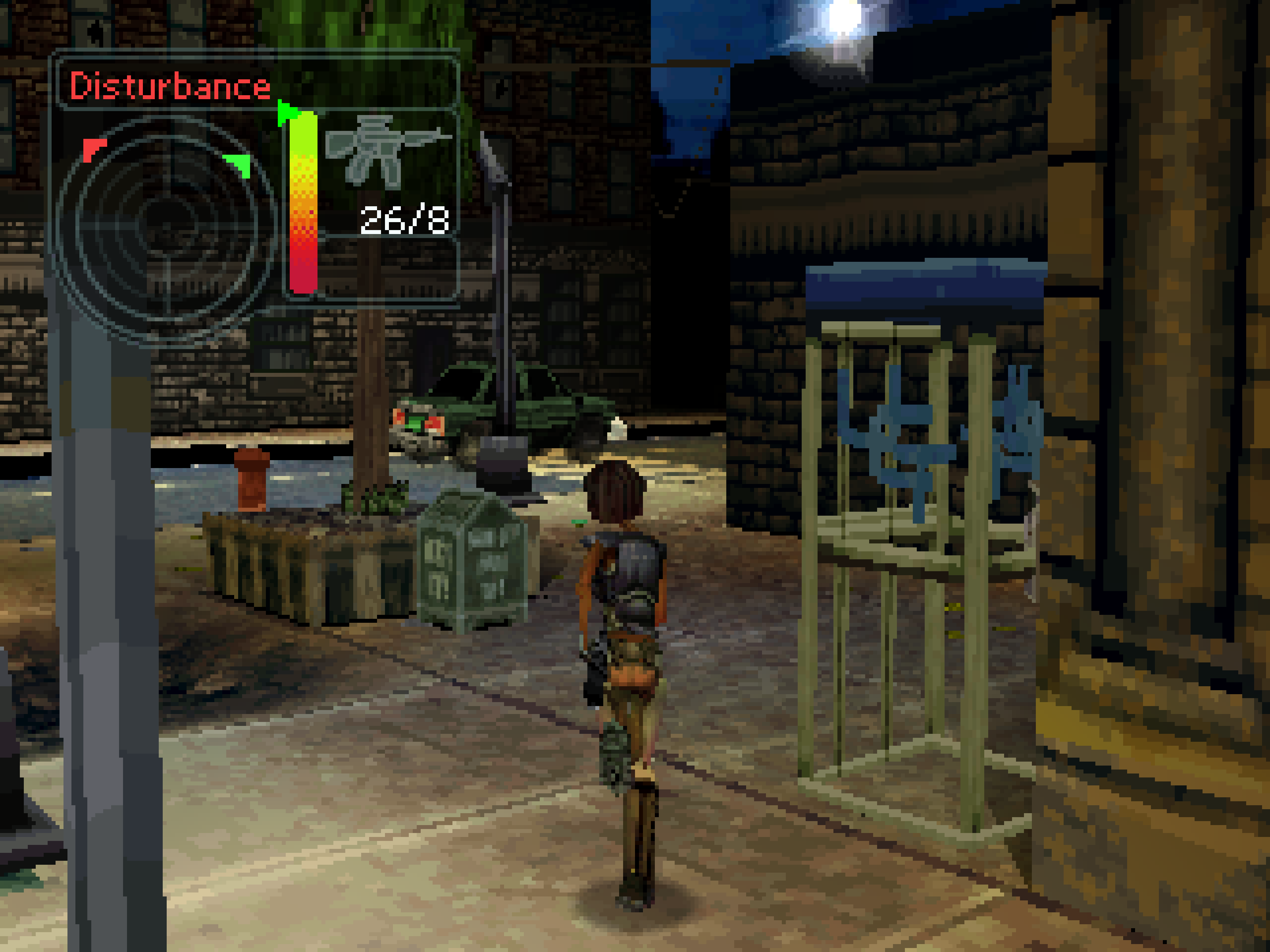 In this respect, the developer – the late Mucky Foot Productions, which shut its doors in 2003 – knew how to cash in on the Y2K craze and put an interesting spin on the stale buddy-cop genre. I’m not the kind of guy who could spoil the story of a 20-year-old-game, but let’s just say the Wild Cats were not your average street gang. Hint: think less Winter Hill Gang and more, I don’t know, Winter Hill Gang but with necromancers.

Equally ridiculous was the city where the game takes places, as well as its inhabitants. Union City was basically New York City if New York had alleys and gentrification was never invented. It’s seedy, dirty and dangerous – think NYC in the 70s, but without the cool music.

Though the game hasn’t aged well by any stretch of the imagination, the art direction and overall aesthetic were rich and detailed enough to convey the things that the graphics engine was no longer capable of; the city still looks and feels as decrepit as it did nearly 20 years ago, when I first played the game. 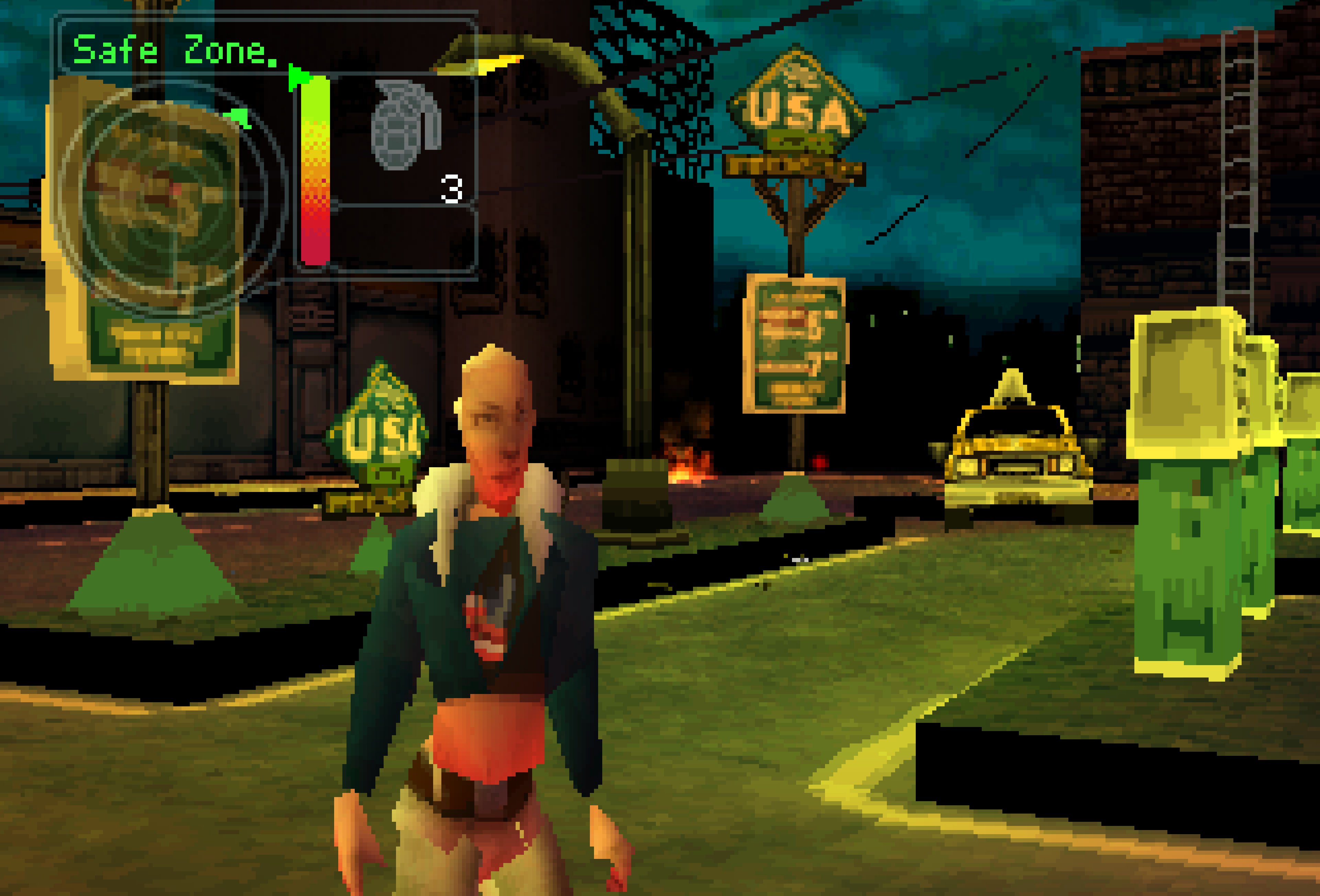 The filth and corruption of the city is put in (intentionally?) hilarious contrast with the people living in it. The residents of Union City sounded and talked like actors auditioning for a role in the worst parody of New York City. From my limited experience with New York stereotypes, I spotted the drunken Irish cop (as if it was the 1920s or something), the sassy black woman, the no-nonsense Jewish woman and a few Jamaican and Puerto Rican accents that, in 2019, would be considered borderline offensive.

The only thing missing from this colourful pastiche of New York archetypes is an overweight Italian Brooklynite in a tank top yelling “BADA-BING!” from his window.

The world is yours

When it comes to the gameplay, Urban Chaos did a few things that, in retrospect, were ahead of their time. In some respects, it was a “spiritual predecessor” for Grand Theft Auto III. The world was not “open” per se, but rather split into multiple sections, with missions alternating between new areas and revisiting old ones with mission-specific changes.

The levels were reasonably expansive, lending each one the feeling of open-worldness with some restrictions. I’d compare it to the hub model from the original Deus Ex, but without the same level of depth. Each level had secrets hidden around, as well as optional objectives, stat boosts, loot and other goodies that you’d have to go off the beaten path to find.

This gave the levels some measure of verticality, as many collectibles were planted in remote, hard-to-access places. This was also where the parkour system was supposed to shine. If you’re an obsessive completionist who’s trying to kick this habit, Urban Chaos is your rock bottom and the parkour mechanics are the intervention. But, as finicky and frustrating as it was, getting as many stat boosts as possible was worth the hassle because they were permanent. 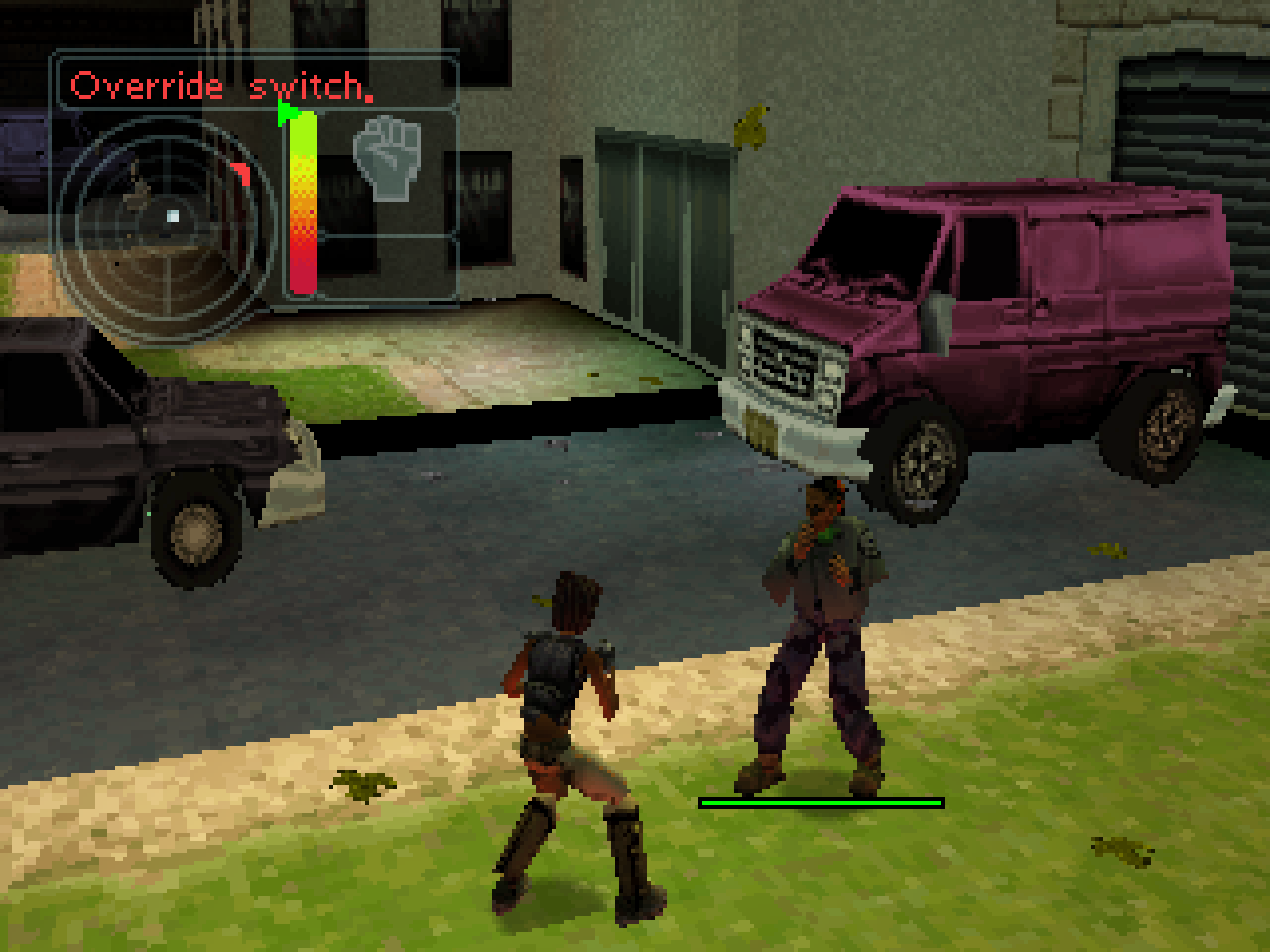 As for the combat, this was where things got interesting. D’arci was trained in the basics of hand-to-hand combat. You got the usual punch, kick as well as several special moves that you could trigger by hitting a particular direction while performing them. There was also a sliding tackle that was very fun to abuse – the falling animation still makes me chuckle to this day.

Now, by virtue of being an officer of the law and using the aforementioned sliding tackle, you could arrest pretty much everybody, except other police officers as they’d simply counter your tackle by jumping. Actually, there was a way to arrest other cops: simply steal a car, run them over and arrest them as they were laying on the ground.

You could then proceed to frisk them and take whatever you found, which could range from a few lousy handgun bullets to a freaking assault rifle – the best way to get some extra loot, if you ask me. It looked like Union City cops had deep pockets, if you know what I mean.

Yes, there were also cars, but they’re not readily available outside specific mission objectives. If you felt like taking a drive through Union City, you’d have to commandeer a civilian’s vehicle. And by “commandeering”, I mean riddling the car with bullets until they made a run for it. Just like GTA, right guys? 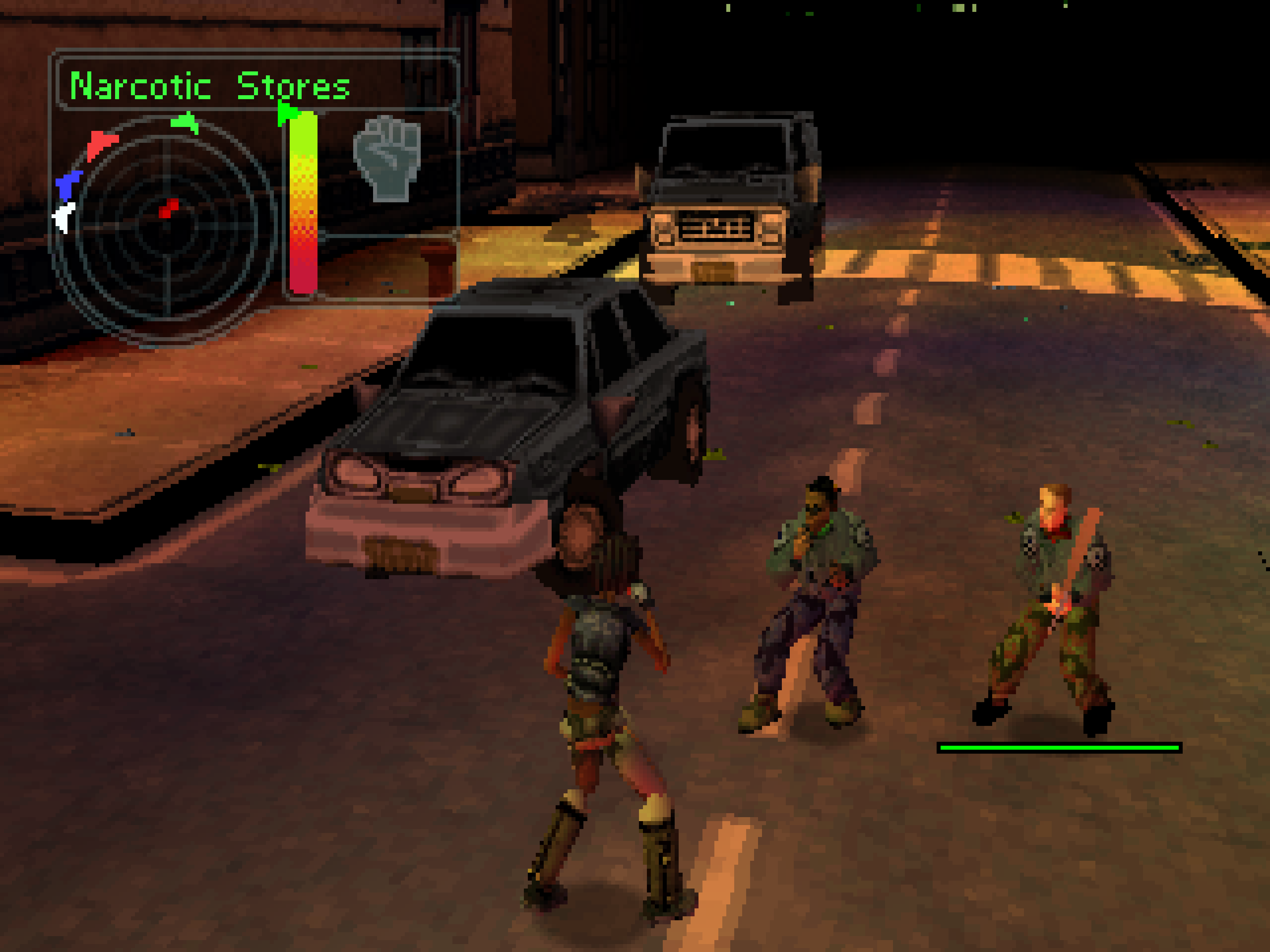 Actually, no. Kill or arrest too many innocent civilians and you’d get a scolding from the commissioner about the mayor being all up his ass, or some cop-movie cliché, and you’d have to restart the mission. Oh, and you couldn’t save during missions. Long story short, committing heinous acts of police brutality had consequences.

This is the gist of Urban Chaos. It’s not a perfect game by any stretch of the imagination, but I love it to death because it was an anomaly back in 1999 as much as it is 20 years later. No other games captured the grit, filth and charm of inner cities better than this did, and that’s something, considering the dated graphics.

There are no other games like Urban Chaos out there, and it’s a shame it didn’t get the attention it deserved. With a little more press and better time, I sincerely think it could’ve been more influential.

As far as the impact it had on me as a person, that nondescript CD case was one of the earliest things that shaped my future taste in media. Urban Chaos may not be gritty or even dark, but it sparked my interest in cop flicks and noire. It wouldn’t be a stretch to say that this game is the reason why I picked up the first Max Payne years later, another title that went on to have a major influence over me. So here’s to Urban Chaos, the unsung hero of cop games, and the sequel we never got.

Marco Giuliani is a mid-western emo by night and a video game journalist by day. Check out his work as lead editor at UnleashTheGamer, or see his occasional tweets on Twitter.

With its dated graphics, tanky controls and less-than-ideal voice acting, Urban Chaos was far from being a perfect game. However, it deserves plenty of recognition for its unique protagonist, gritty portrayal of American inner cities, and insane plot that combines elements of cop films and Y2K conspiracy theories.