The Secret of Monkey Island

Games were always a fixture in Lee Cooper’s life, but it wasn’t until The Secret of Monkey Island that he finally found a universe he could lose himself in.

There are but a handful of things that have stayed with me over the years, whether they’re tangible objects like the soft toy from my first birthday which is now enjoying a second lease of drool-filled life in my infant daughter’s bedroom, or life’s more abstract mental collectables – echoes of shame, elation and depression around which the frail walls of the psyche are constructed.

Doggedly joining my stuffed friend Donkey, the psychological hang-ups in traversing the minefields of teenage social inadequacy, the oft-forgotten drunken hazy wastelands of my 20s, and the realisation and acceptance of the rest of the world and my place in it through my mid-30s, has been the offbeat humour, bizarre populations and pixellated worlds of LucasArts 1990’s adventure games and, within that esteemed roll call, the Monkey Island series.

Originally released in 1990 – a decade and some daylight before Captain Jack Sparrow ruined Caribbean pirates for everybody – The Secret of Monkey Island found its way into my hands a few months after its 1992 CD-ROM release. It was a gift I’d barely even acknowledged because a) it wasn’t a SNES and b) I was an obnoxious 13-year-old at the centre of my own unfair universe. Little would I know that it would kick-start a lifelong love of the genre, and becoming a constant companion for years to come.

At its core, The Secret of Monkey Island sounds like the type of Boy’s Own adventure story that I’d have baulked at as a teen – and still look unfavourably upon now. Our hero, Guybrush Threepwood, wants to be a pirate. Along the way he meets a girl, falls in love and gets into scrapes involving a ghost pirate. 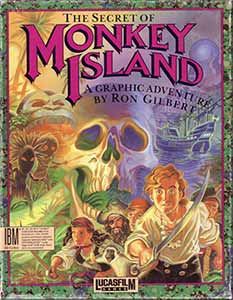 So far, so Famous Five. Enid Blyton books had always left me cold and I was frequently bored during Scooby Doo, so why did a game with a plot that sounds like some hell beast amalgamation of the two – which involved no shooting/running/jumping on heads, but instead required players to talk to characters in order to solve puzzles – appeal so much to me?

It’s worth noting that Monkey Island wasn’t my first video game love. My brother and I burned through what felt like a million games, since the mid 80s, starting on the ZX Spectrum, and I’d loved loads of them, but this was the first game to fully immerse me. The living, breathing, colourful Caribbean of Monkey Island was a world I fully believed in while playing. It continues to be such an infrequent occurrence in my gaming life that it’s rarely been replicated, save for a couple of reality-swallowing trips to San Andreas and the apocalyptic wastelands of Washington DC.

I loved the look and sound of Monkey Island. It was a cartoon made controllable, with the now-famous pirate reggae music perfectly accompanying the on-screen adventures. Even in those early days before the (excellent) voice cast had joined the proceedings, I heard each character with perfect clarity. Like the skilled writings of any credible author, everyone in the game came alive upon reading, individually distinct and defined. I was lured onto the rocks of Monkey Island by the siren song of its aesthetics, and I never left it because I became intoxicated by, and lost within, its world of words. 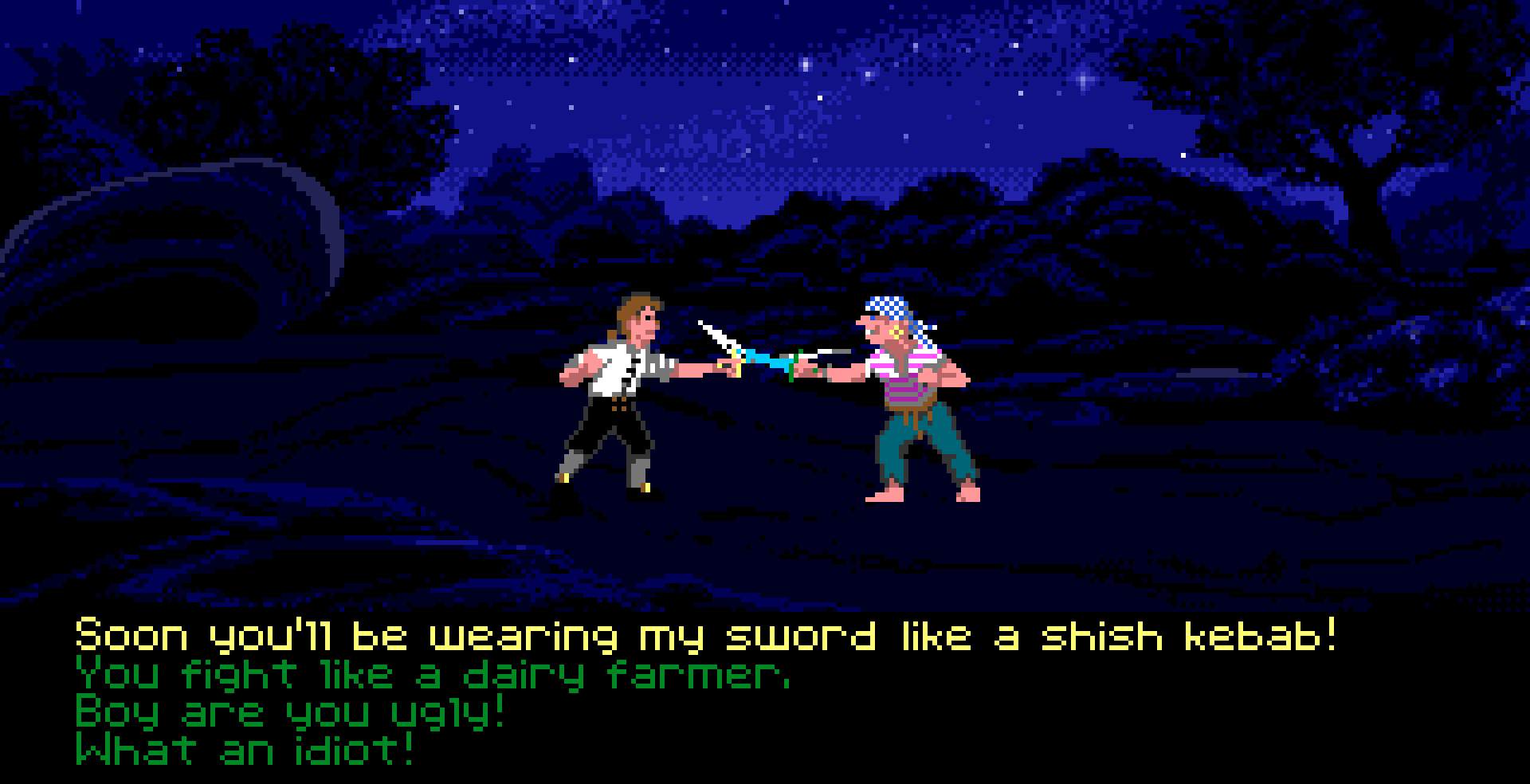 “Is that a banana in your pocket…”

A friend back in the 90s informed me that Monkey Island was more like reading a book than playing a game and that he thought that I was possibly the World’s Geekiest, Saddest Loser™ for playing it so much. While it would bring me great pleasure to tell you he was wrong and now cleaning public urinals with his bare hands for a living, I’m sorry to report he is moderately successful in his non-custodial career and was fairly on the money with his summation both of the game and my social standing at the time.

Monkey Island was sharply written with acerbic wit, consistently funny rather than being laugh-out-loud hilarious, but it never suffered for the lack of belly laughs. In our protagonist Guybrush, the team at LucasArts – specifically creative lead Ron Gilbert, along with Tim Schafer and Dave Grossman – had created an identifiable everyman (even to a 13-year-old like me) who rallied his way through the constant setbacks in his path by out-quipping those around him; he was a towel-less Arthur Dent propelled ever onwards through his Caribbean galaxy. In his love interest, Elaine Marley, they were ahead of the curve in portraying a female character smarter and sharper than every fawning bloke she encountered.

The puzzles were often tough; lateral thinkers would find themselves successful just as often as logical ones, and in the days before a million internet walkthroughs were able to light the way, I can vividly remember finding myself at perceived ‘dead ends’ with several puzzles all at once. Yet there were no dead ends; it was impossible to fail at Monkey Island if you persevered, unless you quit early, which many people did and still do. On more than one occasion I would find myself frustratingly trying to use every object in my inventory with each other and again with every background object on screen and still not figuring out the answer.

While these obscure puzzles felt unfair, the resulting narrative pay-off ensured that the majority of players would forgive these minor foibles. The Secret of Monkey Island was the reason I started keeping a notepad and pen next to the PC; its more annoying puzzles were to blame for the endless doodles of decapitated pirates screaming out death cries of creatively conjoined sexual expletives. 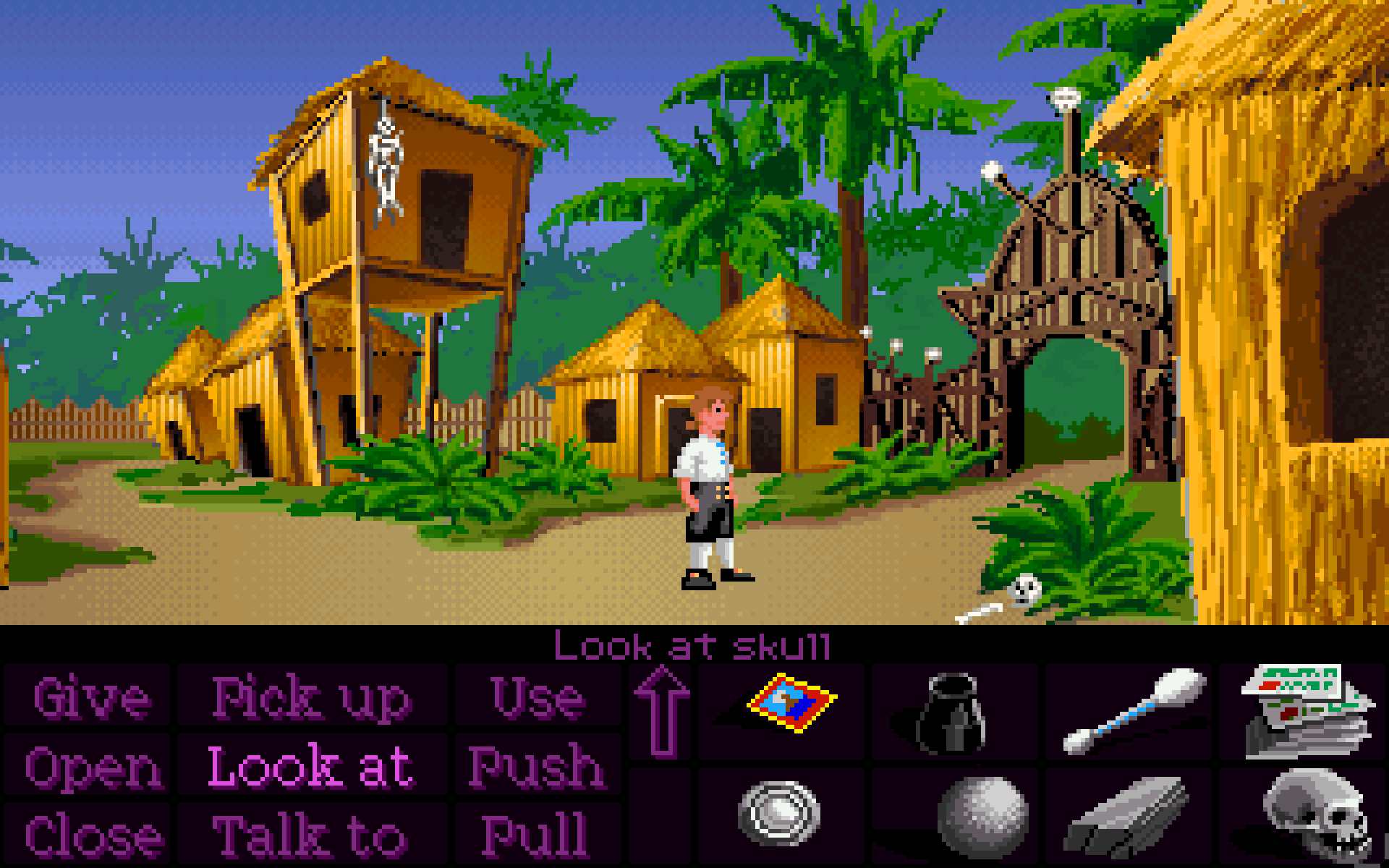 “Never pay more than 20 bucks for a computer game”

It is without argument that Gilbert and his crew at LucasArts went on to better Monkey Island, and I’d happily eulogise Day of the Tentacle, Sam & Max, Full Throttle and Grim Fandango for weeks on end, but the expertise, wisdom and confidence of those titles can only come from trial, error and experience. However, it remains a popular opinion – and one that I fully subscribe to – that LeChuck’s Revenge, the sequel to Monkey Island and a game that predates all the aforementioned titles, remains the daddy of the point-and-click adventure genre, but everything it perfected was formulated in the original.

Monkey Island consistently annoyed and frustrated me almost as much as it brought delight. Despite this, or perhaps because of it, I found myself revisiting it a few years later, and I’ve gone back periodically ever since. It can still frustrate, annoy and consistently entertain, and always captivates me. Its recipe has since been perfected, but the raw ingredients have rarely been bettered.

In a cluttered world of disposable pop culture, few things linger in the consciousness beyond their limited release period, instead getting their individual 15 minutes of fame. For a computer game to remain so revered for over a quarter of a century, the overused description of ‘classic’ may actually be warranted. Even the shadow of a gurning Johnny Depp couldn’t fuck it up.

While not for everyone, the converted will love Monkey Island, a cinematic game that blends a golden-age adventure story, fiendish puzzles and humour that still feels fresh almost 28 years on.