Iain Mew of Super Chart Island was used to hand-me-downs, until a new PC and a borrowed game ultimately led him to discover his beloved Little Big Adventure 2.

“In spite of my powerful telescope, I saw only a couple of flying saucers pass behind the Moon. The Esmers must live on the hidden side.” I recently typed those words into Google from memory and, boom, the exact phrase came up. This line, from a game I last played almost 20 years ago, has stuck in my memory ever since. The impression that Little Big Adventure 2 left on me goes much deeper.

I came to games early as a child, but on outdated systems, playing Commodore 64 games at the end of those platforms’ lifespans and beyond. The advantage of being late was that we were given other people’s then-unwanted collections of games, so we played all kinds of different titles, moving on quickly from anything we got bored with.

When we moved up to the PC, there were no such big gifts; as a result, my gaming became a lot less diverse. I was mostly focused on sports and strategy games, with the exception of point ‘n’ click adventures. That was until a friend lent me his copy of Little Big Adventure, an action-adventure game he was finished with.

It was like nothing I’d ever seen before. Offering characters animated in vibrant 3D against beautiful pre-rendered backgrounds, it was immediately full of life in a new way. Little Big Adventure was set in a colourful fantasy world ruled by a tyrant using his army of clones and teleport machines. It started with pony-tailed main character Twinsen having grand, prophetic dreams about the end of the world, and you were given control of him after he was arrested for talking about them. That set him off a quest that covered the whole world and, eventually, culminated in a showdown with the tyrant. 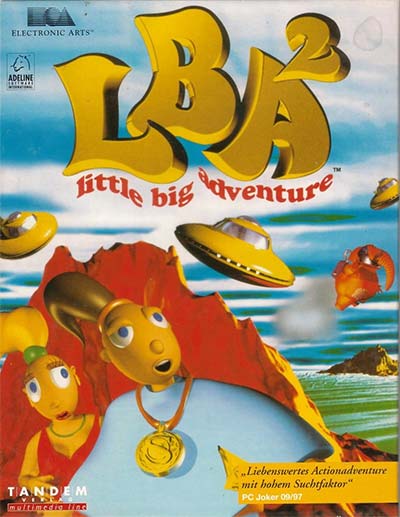 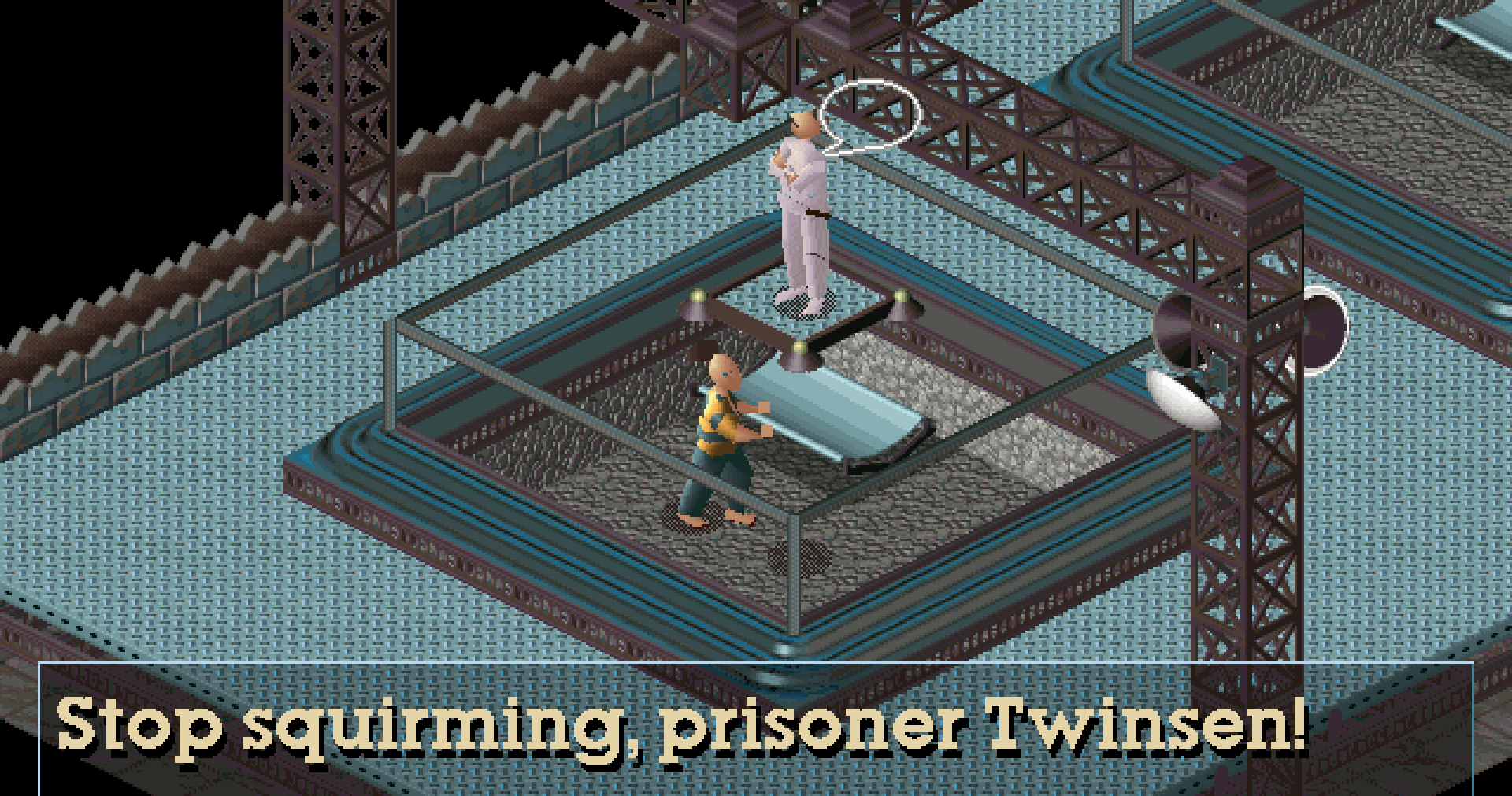 Having helped Twinsen escape from prison before collecting his magic ball and ancestral tunic, it quickly became apparent that Little Big Adventure featured a scale and freedom I’d never seen. I could go wherever I liked; solve puzzles; talk to the array of anthropomorphic animals and beach balls that made up the game’s citizens; get into fights using Twinsen’s fists or his magic ball; and enjoy exploring an unpredictable world.

Little Big Adventure’s story of a prophesied chosen one and technological surveillance state sat oddly with its whimsy – it was also often beyond frustrating. Rather than Twinsen’s actions all being mapped to different keys, he has four different moods that you switch between – normal, sporty (for running), aggressive (for fighting), and discreet (for sneaking).

As such, if you wanted to fight someone, get across the screen at a decent speed, and then talk to someone else before running off, you would have to switch mood four times. It also had sections where one false move sent you back a long way. These issues, combined with the fact I had to give it back to my friend once I was done, meant that while I was amazed by it, it was a flawed experience that I wouldn’t relive.

A couple of years later, I was very excited to read news of its sequel. I still remember the magazine review I read just before its release (but not the British PC mag it was in), with a sidebar comparing it to various other similar activities; the highest rated one was “dressing like a Teletubby and rolling around, on something”. I only got the drug implications later. At the time, it was a new experience for me to anticipate a game, and even more of one for it to live up to expectations so completely.

Released in 1997, Little Big Adventure 2 was once again created by French developer Adeline, and directed again by Frédérick Raynal, better known for his work on Alone in the Dark. It returned to the same world a long time after the first game and saw Twinsen’s now-normal life interrupted again, this time by the arrival of aliens. Along the way, you unravelled the real intentions of the visitors, taking him into space and eventually leading him to save the world all over again.

It fixed some big issues with the original, most notably more sensible checkpointing and a slight modification to the mood system, so you didn’t have to change to walking slowly to talk to anyone – hallelujah. It was also much more ambitious in its approach, with much of its world rendered in full 3D, and its predecessor’s fixed isometric view only used indoors. 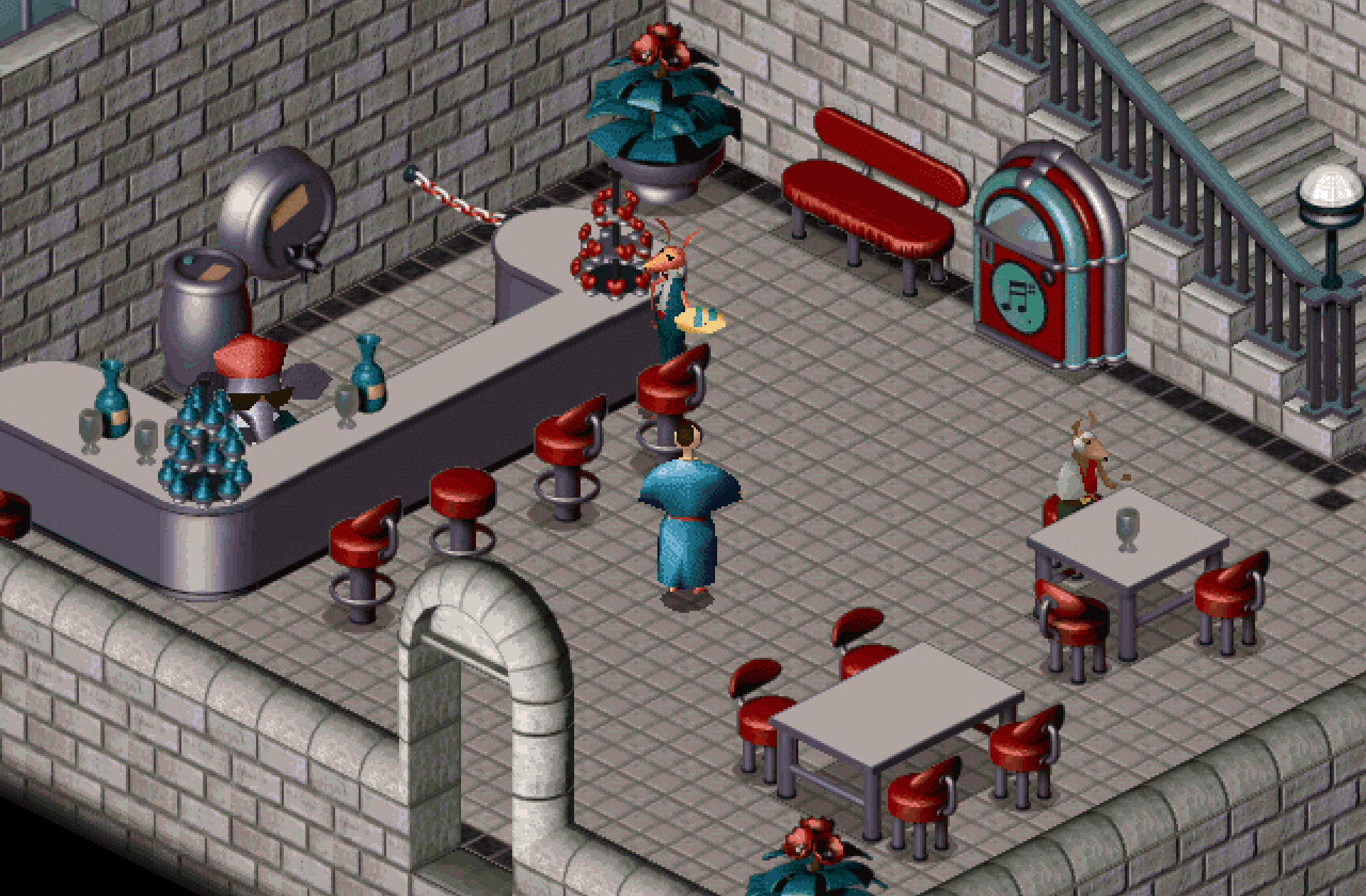 This was a brilliant best-of-both-worlds choice, and the outside areas looked stunning for its time (for context, we’re talking a year before Ocarina of Time). The initial stages focused on Twinsen’s home island, in the teeming rain, were very atmospheric and gave a fine introduction to the game’s new sense of freedom. It felt like the already rich world of the first game had been turned into an actual place. I’d happily spend ages walking around, checking out the little corners of the landscape, even if the reward was generally a couple of hearts or coins at most.

Little Big Adventure 2 also worked in a way that the first game didn’t, thoroughly embracing its whimsy and oddball humour. Rather than being thrust into a dystopian nightmare, the game started with a mission to get some medicine for the dragon who flies Twinsen around. One of the first tasks was stopping an umbrella thief.

There wasn’t any big plot reset, and it was still set in a world where Twinsen was a recognised world-saving hero. However, he wasn’t recognised by the elephant staffing the entrance to the Twinsen museum, who insisted on charging him an admission fee. Rather than being handed your special hero’s clothes, you gained them by sneaking in through a window of said museum and disabling the security. 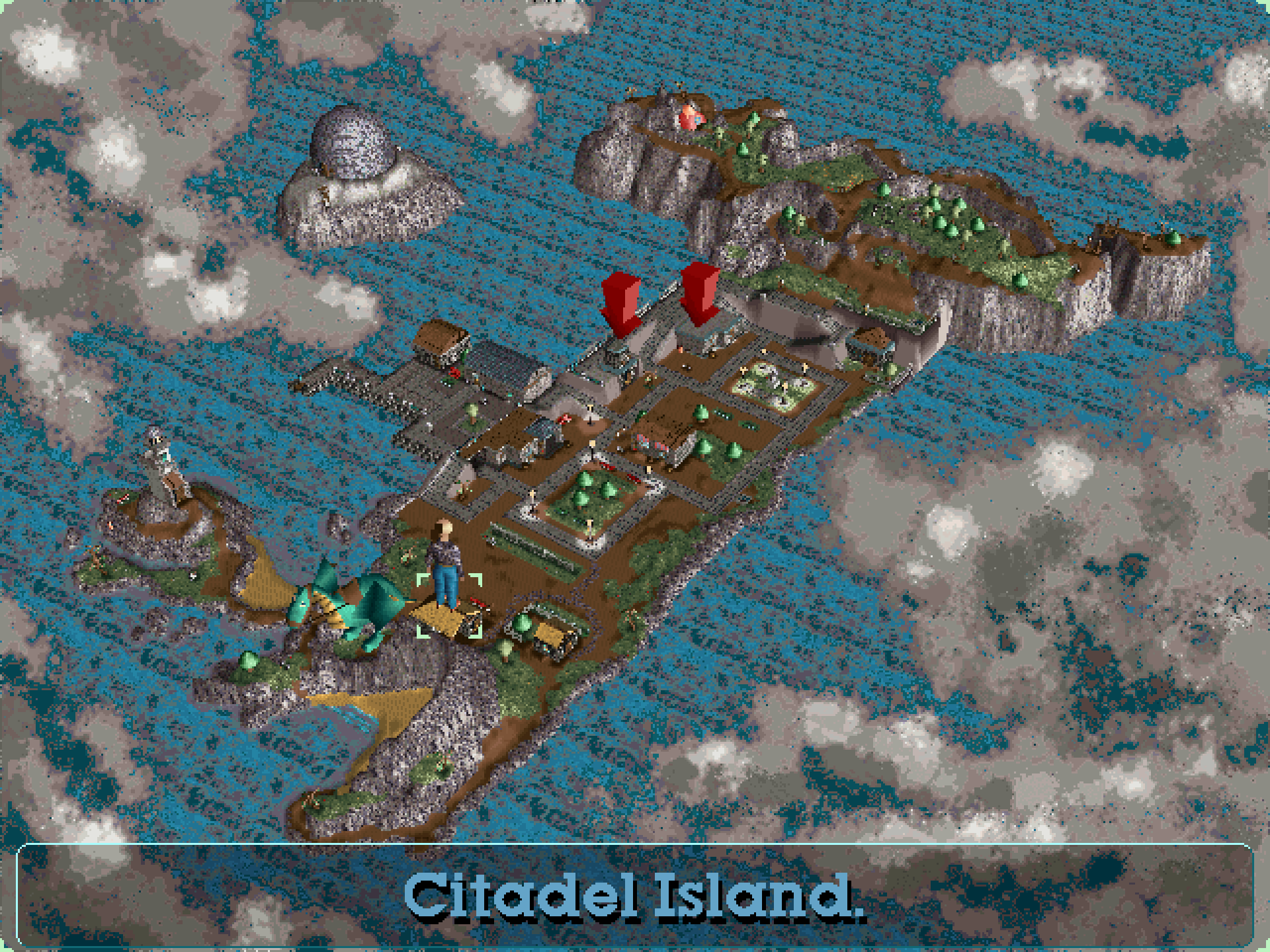 A game of real character, and amazing characters

Soon after, you were tracking down a rabbit lighthouse keeper to help out a rabbit weather wizard, and finding out along the way that pretty much no one likes the guy you’re searching for. A passing elephant casually wishes a monster on him. One of the most charming things about Little Big Adventure 2 was talking to people, especially for insights like that.

You may have been the world’s hero, but you were only ever a minor blip in their lives, which always seemed rich and full of hopes, dreams, and petty grudges. What’s more, every line of dialogue was voiced. Twinsen was no mute lead (read a signpost pointing to downtown and he sings it like Petula Clark), but David Gasman voiced him as a straight character in a whole world of incredible overacting.

No opportunity for an exaggerated accent or mood was missed in Little Big Adventure 2. That line about the powerful telescope and flying saucers, which stayed in my mind for so long, was full of such beautiful pride and pomposity from the inventor who said it. Not only was this world so absorbing to explore, but my brother and I would have fun imitating all these lines back and forth along the way.

Oh yes, flying saucers. Making the story of Little Big Adventure 2 about alien invasion was another brilliant move. Once you became a wizard and got invited to the aliens’ planet (via a secret base hidden under a sauna), you were introduced to an entire new world. You also got to go to the moon. The aliens’ planet was a lovely mixture of the familiar and strange, with gas seas and purple ground under a grey sky. 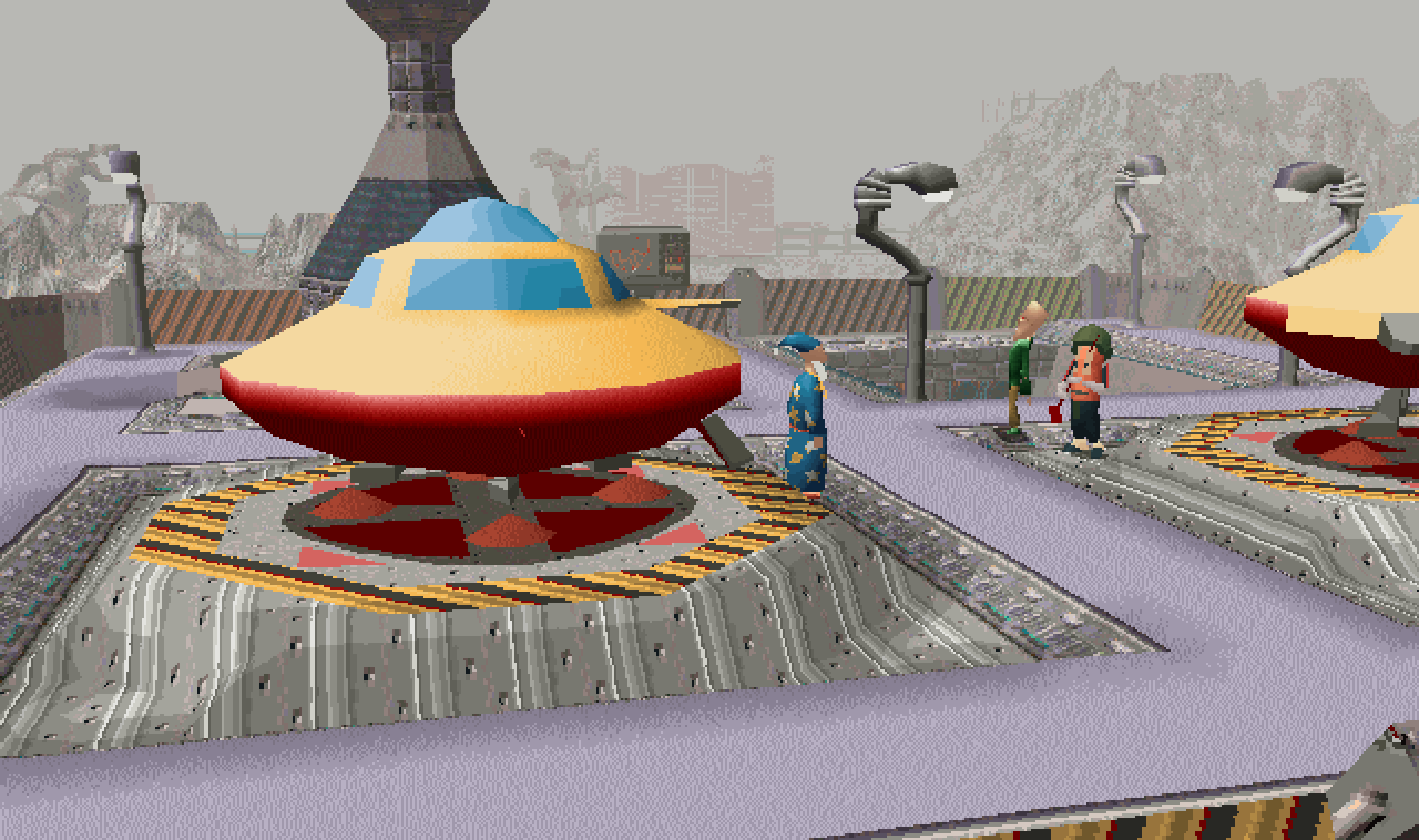 Getting to not only explore the familiar world in new detail, but an entirely new one, was one big wow moment after another. And despite the whole invasion and a bit of child-stealing, the aliens were not all evil; they had all kinds of concerns of their own. It wasn’t a message that the game made a big thing of – given how much time you instead spent focused on throwing a bouncing ball at wobbly sausage soldiers – but it was a nice one.

Best of all, and unlike our experience of the first game, Little Big Adventure 2 was ours, to fully experience at our leisure (without the internet to look up solutions, it was a long process), and play over to enjoy again.

For me, Little Big Adventure, but specifically Little Big Adventure 2, was an introduction to a new set of possibilities for what games could be. It took a long while for anything else to catch up to them. I look back and realise that my favourite Zelda game is The Wind Waker, not just because it was the first 3D one I played, but because it was the one that felt most like LBA2.

When Beyond Good and Evil became a cult classic, my main takeaway was how much it shared with Little Big Adventure 2. The same kind of worldbuilding, plus its combination of ambition and colourful whimsy, has caught my eye ever since, even if it’s unlikely any other game will stick one silly line of dialogue in my mind for two decades.

Little Big Adventure 2 was outshone by many more popular 3D games in its genre, but its thoroughly realised world has a unique charm that still makes exploring it a pleasure.