By Gary Heneghan April 2020 No Comments

Some games can be too addictive. With this firmly in mind, Gary Heneghan recounts his experience with a game that he had a real love-hate relationship with…

Okay, hate may be a bit strong; it’s more of a complex love-hate relationship that cost me money, caused me stress and affected my sleep. I haven’t played Football Manager 2012 in a few years, and due to this, I consider myself a reformed addict.

Why do I have such strong feelings towards the series? Well, FM12 was the first proper PC version of the franchise I owned outright. Growing up, I was the only kid in the world who couldn’t play Championship Manager, courtesy of owning a PC with an incompatible processor. It was tough growing up, seeing the legendary Champ Man 97/98 pass me by.

After years of inferior substitutes, I finally got hold of Championship Manager 02/03 on the Xbox. It was the realisation of a dream. For 20 seasons, anyway; I felt robbed that the game only let you play for two decades. Where were my managerial golden years? Where was my washed-up managerial swansong, slumming it in the Second Division while the assistant coach did all the training?

Football Manager 2006 on the Xbox 360 gave me a second chance at redemption. Alas, the combination of small text and my bedroom’s bad layout made it hard to play. The final straw came when I overwrote my save game while helping my friend edit his Pro Evolution Soccer teams. I’d be enraged if it was any other game, but frankly I’d burn down an orphanage for Pro Evo, so I just had to let it go and move on.

I thought my Football Manager dreams were over until 2011, when I got talking to some workmates about Football Manager 2012. They persuaded me to pick up a copy on Steam under the premise we could play it together. That’s always the trap with modern FM games: the promise of multiplayer. It never comes off, because the franchise is a game to be played in isolation, lost in a sea of stats. 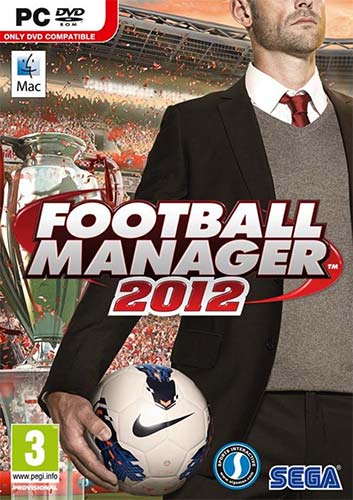 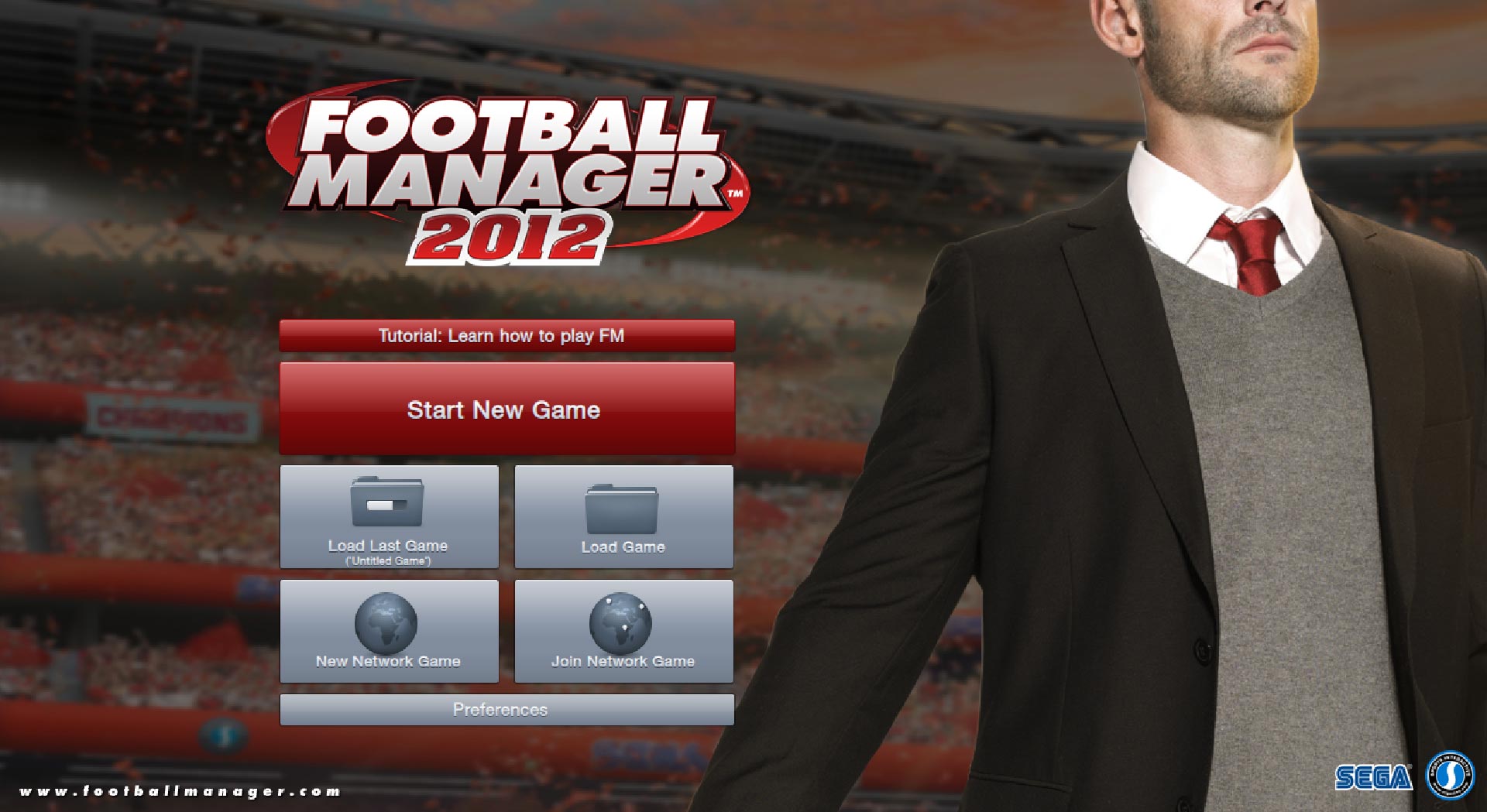 Sure enough, there was no multiplayer. It didn’t matter – I was heading north of the border on my own.

A man of principle

My trip to isolation started with a trip to Scotland, of all places. I have this weird quirk where I can only take a vacant post when starting a new Football Manager game; it feels like cheating to start at a big club. I don’t like to disturb the game world too much; removing an established manager from his post, even though he’s digital, just feels wrong to me.

This thinking led me to Peterhead, the only vacant job in FM12 to start with. Despite having no money and a small squad, I actually managed to win the Scottish Third Division in my first year. It was pretty fortunate to be honest: no clever tactics or signings, but a solid strategy of attacking a lot and riding our luck – how all great teams are built.

It was at Peterhead I learned how to play Football Manager 2012. The main aspect of the game was setting up a formation and getting the right tactics. Tactics were crucial – you needed to know when to attack and defend. Get the wrong tactic and the CPU would beat you every time. Thankfully, I learned early that the route to success was to follow the assistant manager’s instructions, as they had almost psychic knowledge of when to defend and attack.

Naturally, this success went to my head and I started looking for a bigger job. I’d set my character as an ex-pro player, so I had a few English clubs sniffing around. Scunthorpe were the ones who offered me a post and as an established League One team, I was optimistic that it was a good choice. So I waltzed out of Peterhead, ready to start my ascension to the top of the game. 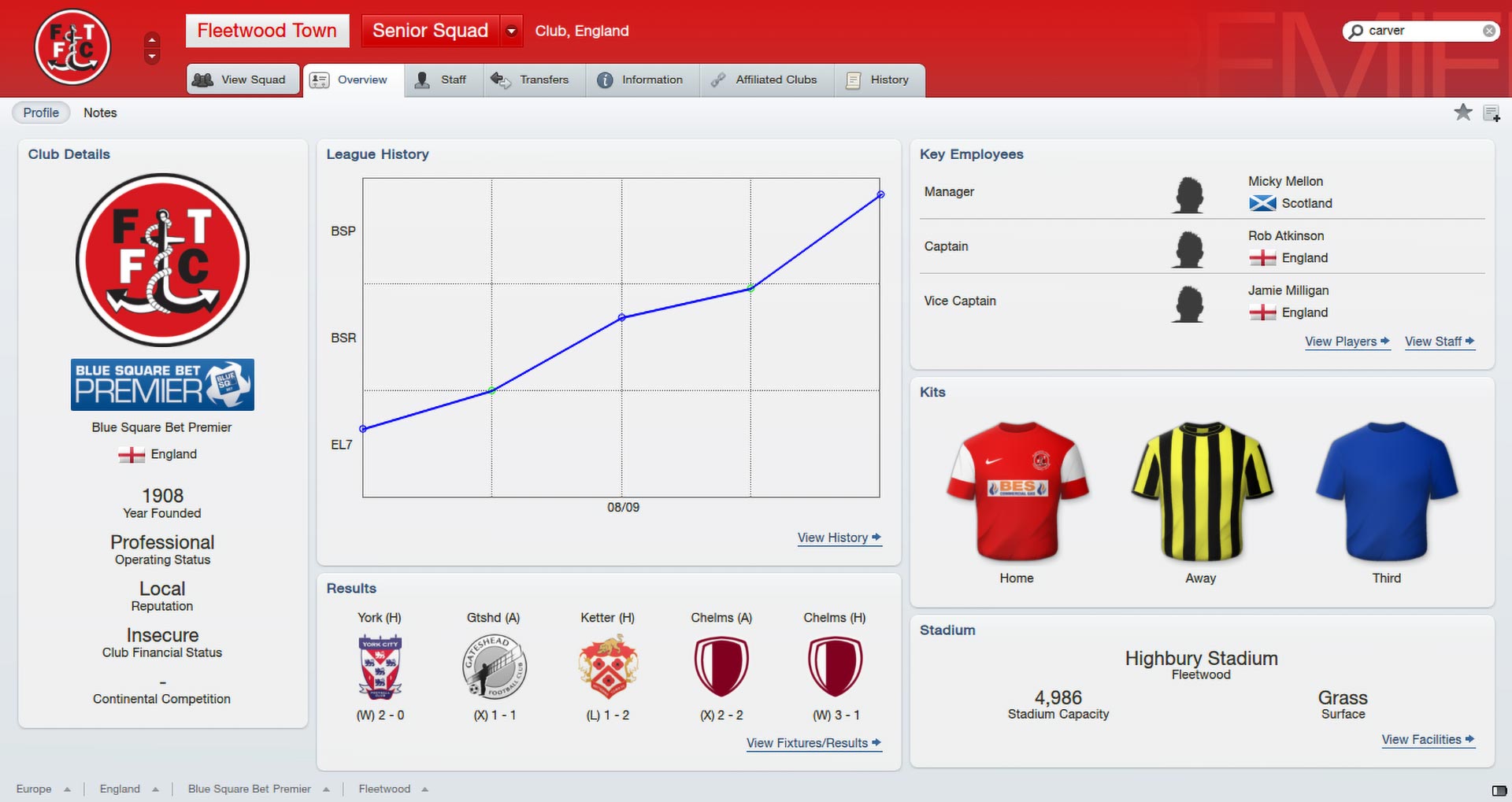 My optimism didn’t last long. Nothing ever went right at Scunthorpe. Regardless of formation, we could never win more than one game in a row. Any new signing just went through the motions. I reckon if I’d taken the team out for milkshakes, they’d have complained of being lactose intolerant.

It made jumping to Portsmouth an easy choice. Portsmouth were on the verge of relegation from the Championship but anything was better than the depressing malaise of Scunthorpe. So I took the Portsmouth job and tried to keep them in the Championship, falling short with a few games to go.

There’s a viewpoint that you have to hit rock bottom before you can rise, and that was true of my Portsmouth run. Relegation made my experience of Football Manager 2012 even better – I was determined to get Portsmouth back to the Championship. I also fancied winning the LDV Vans Trophy to prove how good a manager I was.

I painstakingly built my squad to cope with the demands of both competitions: two players in every position in my favoured formation, with a selection of youth players to fill the cracks. It was that preparation and the goals of Darius Vassell that got us promoted and helped us claim the LDV. Vassell was incredible that season, scoring in nearly every game and generally being an all-round swell guy. For this, I made him a coach after his eventual retirement. 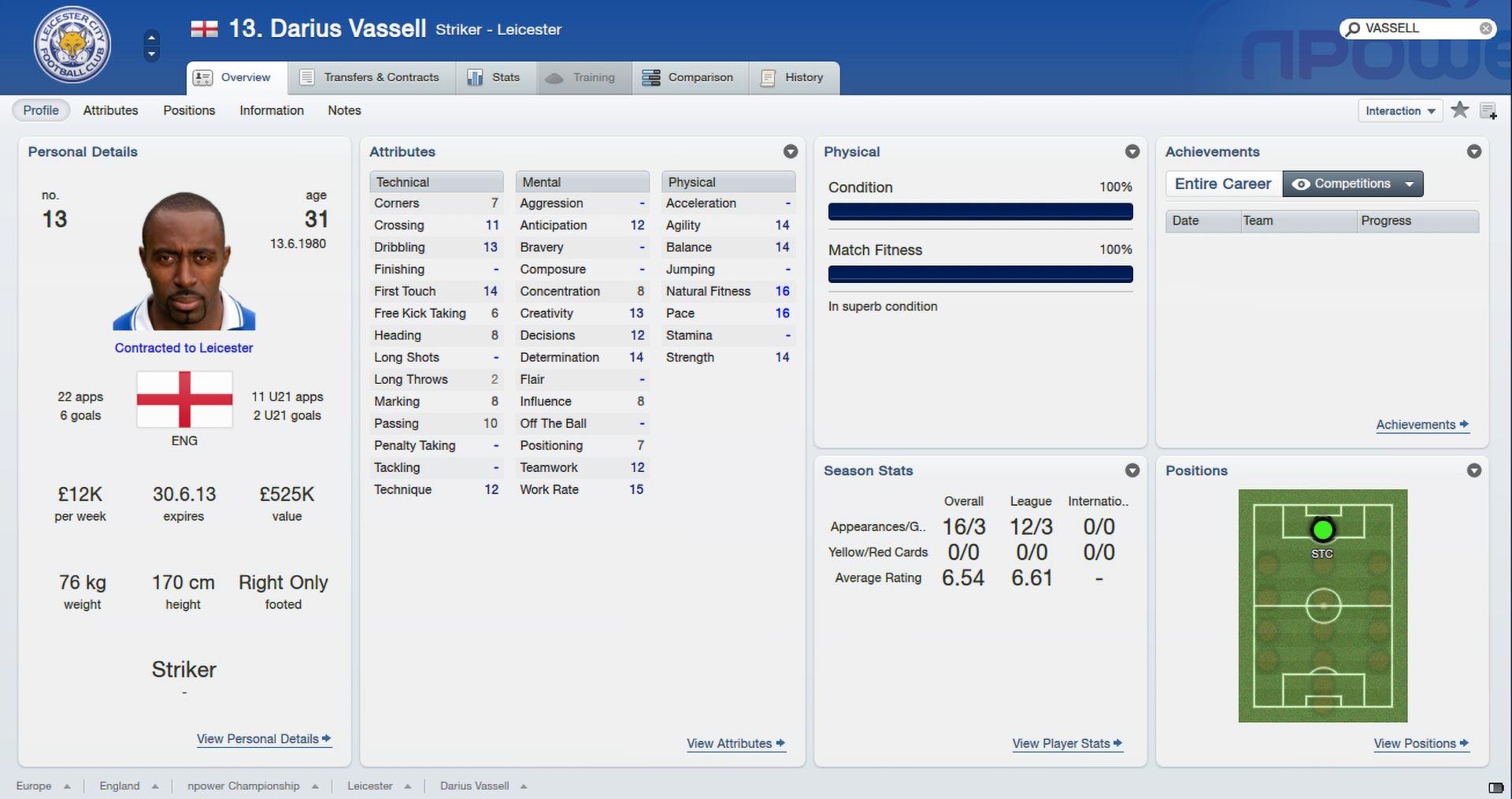 Life back in the Championship was hard, though. Portsmouth had no money at all and I had to wheel and deal. Our scouting policy was to find anyone who we could afford and bring them in. It was a patchwork team but we had some good mid-table finishes. The highlight of this spell was a 5-3 win over Southampton, which came via a Vassell hat-trick and my excellent tactic of making substitutions before fending my children away from my laptop. I’m sure my wife has never been more impressed with me than that moment.

Eventually, I left Portsmouth. I loved being in charge of my hastily assembled misfits but I wanted to manage in the Premier League. Bristol City came calling so off I popped. It was a huge step up, but I actually don’t remember much of this spell because my sleeping patterns became an absolute mess.

The problem was, I’d started to micro-manage. Now I had money, I was trying to build an elite club. The zenith of this approach came during a family holiday to Center Parcs, where I spent every night building my coaching team. I painstakingly checked stats, personality and wages trying to assemble a great backroom staff. It took me all week; I was going to bed at 2am every night then waking up at 7am with my kids. It nearly broke me.

It might not sound too bad, but it’s hard to try and keep up with two young children when all you can think about is who Andy Carroll’s strike partner should be. While the young ‘uns were on the swings, my mind would wander to my coaching appointments and which ex-Premier League superstars were available. And at the time, I probably spent more time at Bristol City organising and planning than actually playing matches. I think I was relieved when the Everton job came up.

This Merseyside role was my holy grail. It was the job I wanted on Football Manager 2012 and I was finally in with a chance of getting it. FM12 had the strange quirk of giving useless managers multiple high-profile jobs and I’d get frustrated seeing the likes of Steve Kean get big job after big job. This was my turn to be in charge of a huge squad and I was going all out for it. Everton had sacked Alan Shearer (his sixth sacking in six years), and I was to be the saviour.

I got the job fairly easily – I think Vassell put a good word in for me – and soon set about saving Everton’s season. I got them out of the relegation zone and built a fine team, re-establishing the fans’ faith. As I developed a new squad over the summer, Everton were rumoured to be in line for a takeover. I was worried.

A takeover in Football Manager 2012 normally means you’re getting sacked, regardless of performance, as the new board always wanted their own manager in. Sure enough, Everton got taken over in October while my handpicked squad were starting to impress and I was sacked. Who replaced me? Alex Ferguson? Arsene Wenger? Jose Mourinho? No, John Carver. While I’d been working my way up the leagues, Carver had somehow got the England job and won the World Cup… how could I compete with that? 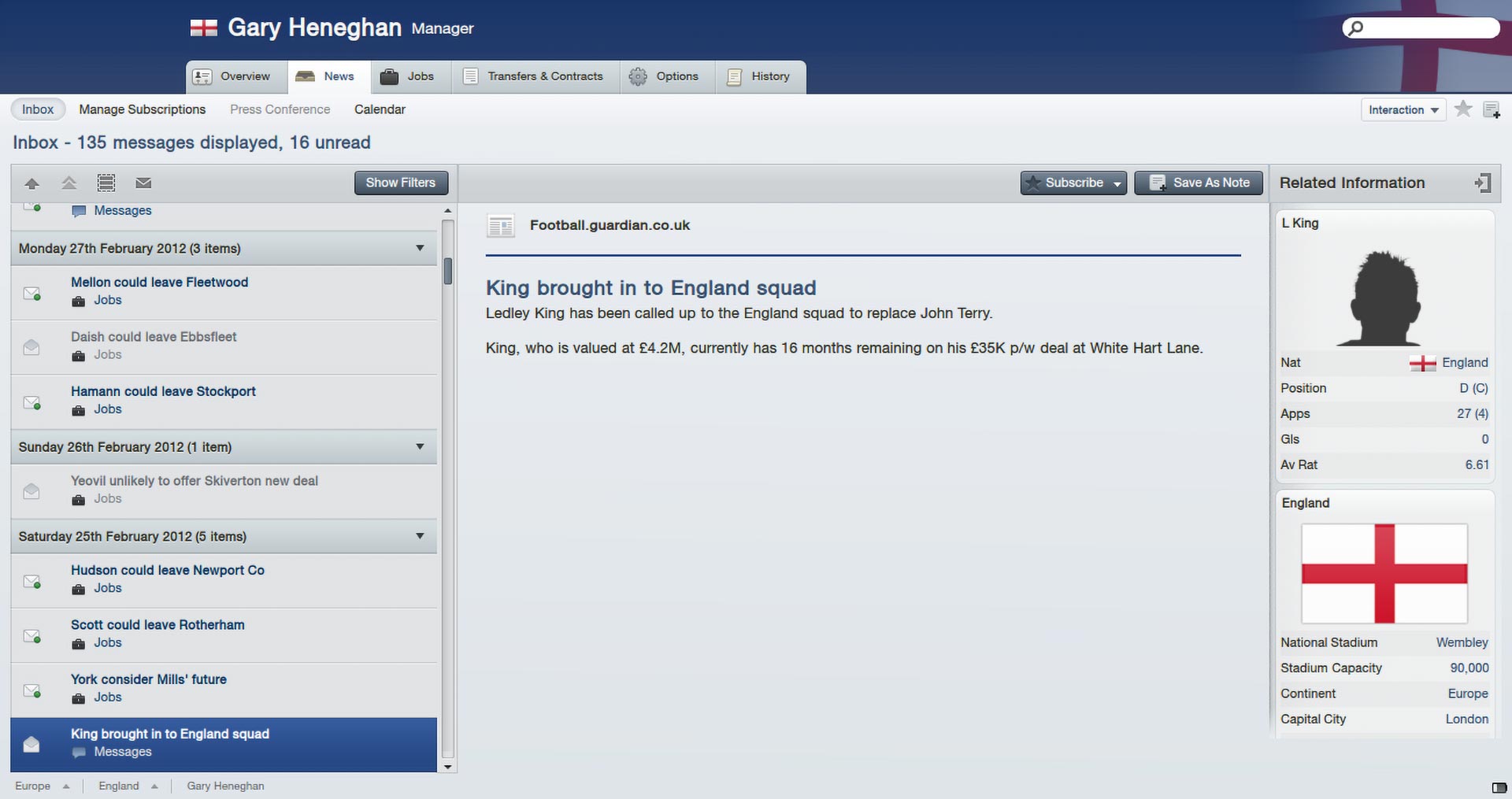 As I was sacked, my love of FM12 ended. A day off work from sickness was spent trying to find a new manager job, but I ruined it by forgetting to actually apply for them – I just sat there, assuming someone would offer me one!

It may have been for the best. Over my 250 hours on Football Manager 2012, I lost sleep and valuable time. Now I’m free, I have no idea how I got dragged in so deep. When you’re assembling a squad with the same level of care that Noah took to get the animals into the ark, you know it’s time to stop.

Football Manager 2012 is a great version of arguably the best sim all time. While it really is just a database, the level of immersion can only be matched by a few games. It’s like having a second job, except there’s no wages or awkward conversations with colleagues. I’d recommend it to any football fans, but expect to lose your life to it.