While Toyland is Castle of Illusion’s most memorably-designed level, its marching music pushed gamers to overcome the level’s challenge – and helped Matt Gardner overcome a personal test, too. 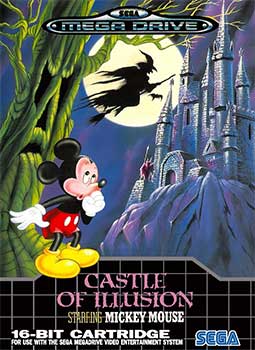 If you played Castle of Illusion on the Mega Drive, you might still have the inimitably garish pinks, purples, greens and yellows of the Toyland level slightly burned into your retinas. However, its first-act song – Toyland Part 1 – will be positively carved into your eardrums, and if you’ve not heard it in a while, chances are you won’t get it out of your head if you hit play on the video above once again.

Castle of Illusion wasn’t the best game of its generation, but it certainly set the bar for what followed. It followed a standard Disney hero/villain trope: the evil witch Mizrabel kidnaps Minnie Mouse, and as Mickey, you have to go to the Castle of Illusion to get seven rainbow gems from seven largely different worlds and use them to build a rainbow bridge, before giving the old bird a damn good thrashing.

It was released a year before Sonic the Hedgehog, and long before more refined Disney platform classics like Aladdin, The Lion King and The Jungle Book. It was slow, occasionally unwieldy and frequently frustrating, but its art style was strong, its storyline was classic and its mechanics worked perfectly. 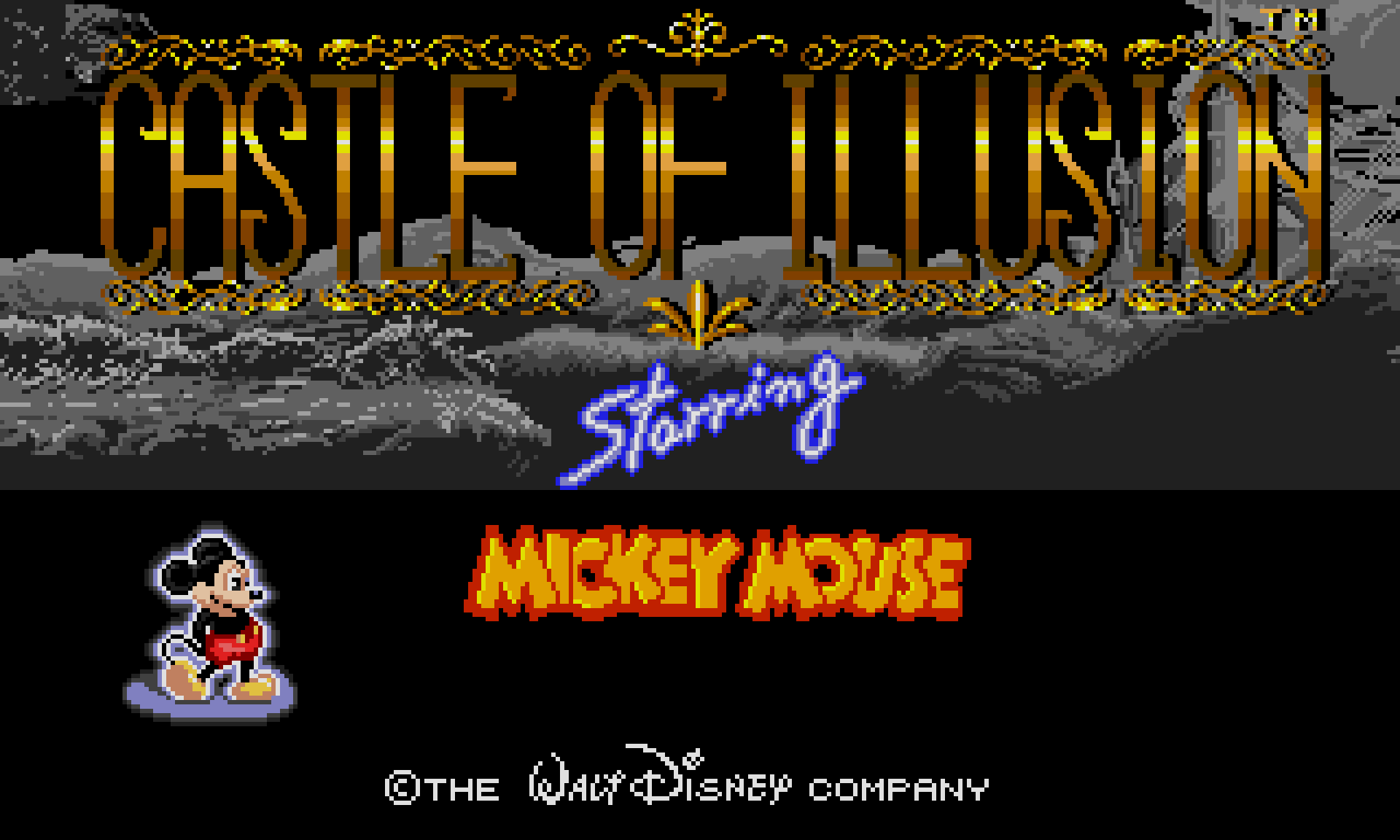 The game was added into my gaming mix during a second summer stint of borrowing a Mega Drive II off my brother’s university pal, Duncan. He clearly wanted to add to his Mickey Mouse beach towel with more Disney merchandise for his impulse console investment, and with Castle of Illusion, it was a rather literal change of pace once I got round to playing it. Having all but mastered the neck-breaking speed of Sonic 2 the previous summer, it was an odd experience to see Mickey basically walking though levels with a shit-eating grin on his face, despite his missus being locked up and tortured by some bint with a broom.

Although the physical pace of Mickey never changed throughout the game, things still felt like they were dialled up a notch on level two: Toyland. It became available once Mickey Mouse had strutted through the Enchanted Forest, kicked fuck out of a haunted tree and collected the red gem. 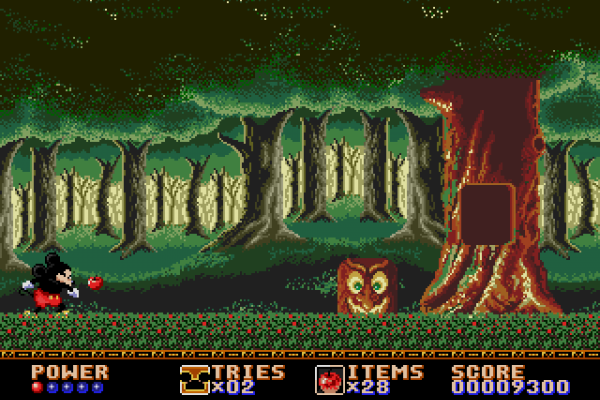 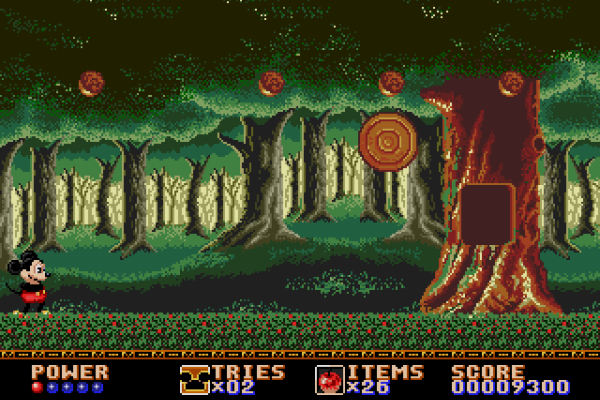 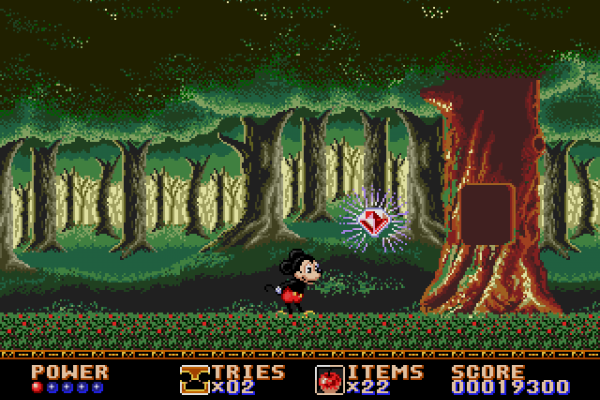 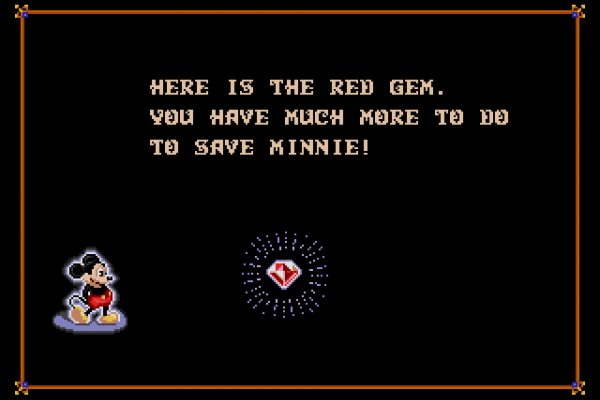 In this second world, you were on the hunt for the orange gem, which was guarded by tin soldiers, toy aeroplanes, jacks-in-the-box (that seems to be the way you’d pluralise that…) and arsehole clowns on unicycles. However, the exit to the level was right there… and it was locked.

Toyland Part 1 was the music that underscored an experience which proved to be new and exciting. This standard marching song paired wonderfully with the soldiers you encountered as your first enemy; it also utilised a glorious heightening melody that matched the direction of travel. You see, with a lack of traditional lateral access due to the locked door, you had to travel upwards until you found the key, then careen back down successive slopes you triggered once you picked it up. My mind was blown: a platform game where the screen moved up and down instead of left to right? Well I never.

The upbeat tempo of Toyland Part 1 wasn’t fast, but as Mickey simply sauntered through these dream worlds, the song didn’t need to be anything particularly quick. You were geed up and wanted to get to the top as quickly as possible, but you still felt there was enough time to kill enemies with your arse – something I still believe caused unimaginable trauma to Mickey’s ringpiece, especially when enemies included bats, bony fish and armoured knights with swords.

The reason that I know Toyland Part 1 is a classic isn’t because the tune was all that great – as I say, it’s quite plain, as far as 16-bit platformer songs go – is because it started to invade my non-gaming life. Specifically, it used to run through my head when undertaking the greatest challenge that a young, overweight kid like me could face in the mid-90s.

I was obsessed with going out on my bike, especially in the height of summer, when I’d do laps of my neighbourhood in north-east England under its positively balmy 8°C July skies. It was a simpler time, when Freddos were 10p, the most popular comic book character of note was Dennis the Menace, and Jim Davidson was an inexplicable national treasure, even though people only watched Big Break for John Virgo’s trick shot.

On my two-wheeled travels, I knew every turn, shortcut and angry resident who didn’t take well to my formative urbexing. I developed off-road tracks on partially-abandoned building sites, knew when to hop my bike on the road that went round to the shop so I’d avoid hitting a foot-high kerb and cracking my head open (again), and which roads I could cycle on without my parents’ friends dobbing me into my parents again, for like the 12th time that year.

One thing I wasn’t so good at was climbing hills, which was shit, because I loved flying back down them. I had a five-speed Apollo bike, and I simply couldn’t get it to the top without sticking my leg down for a breather, or outright walking my bike up. But after being kicked out of the house to “get some fresh air” by my mum mid-Castle of Illusion – and having just beaten the Toyland stage – I had Toyland Part 1 stuck in my head. I got to the bottom of the hill and, remembering Mickey’s epic climb up the colourful blocks, I set myself a target: sing the song in my head, and if I made it to the top by the time it looped round, I’d “win”.

I got to the top without a rest for the first time in my life.

Since that moment, I sang Toyland Part 1 every time I went up that hill, and didn’t even break a sweat. It was the perfect pace to match with pedalling. It also proved to be the perfect speed to walk to, particularly if I felt like I had purpose in my quest, e.g. buying aforementioned Freddos for 10p – a separate investment that perpetuated the need for a soundtrack to get my fat arse up any street with a vague incline, bike or not.

In 2013, Castle of Illusion became one of the first games to get on board the full-remaster bandwagon, coming out on PS3, Xbox 360, PC and mobile. In a rare duff moment for someone I otherwise adore, Grant Kirkhope – a man part-responsible for the music of GoldenEye, Star Fox Adventures, Banjo-Tooie and much more – reimagined the entire Castle of Illusion soundtrack, but didn’t seem to do it any justice.

With Toyland, he didn’t do the honourable thing and finesse what was already lovingly created; he simply redid the entire song based on Toyland Part 2, a song which is predominantly played in the minor key, making it was all the more miserable. Gone too were the disgusting yet lovable pastel visuals of the stage itself, replaced with building blocks and a children’s bedroom as an inexplicable backdrop, despite it being called Toyland – i.e., a land of toys. An independent nation of toys that was not living inside a child’s boudoir. That’s like putting the entirety of Peru in a Wakefield cul-de-sac.

The reboot was still charming, but lacked the pure appeal that the likes of Toyland Part 1 brought to its predecessor 23 years earlier. The original Castle of Illusion was, and still is, defined by its 2D simplicity, bright and brash colour scheme, simple storyline and, above all, a basic yet functional soundtrack. Other 16-bit classics – and hundreds of titles since – would go on to mimic this formula, but most never captured what Sega and composer Shigenori Kamiya did in 1990.