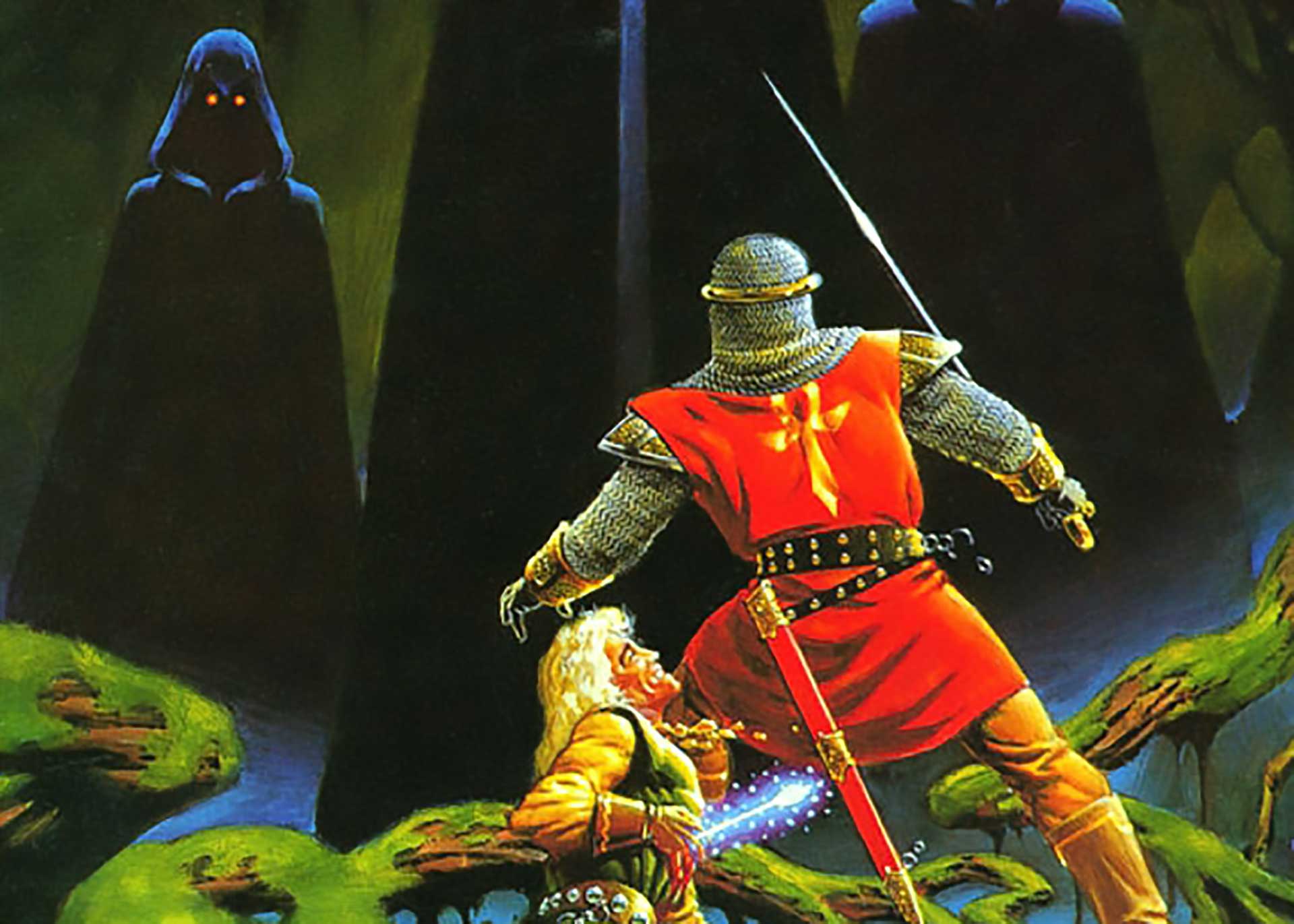 The world of Ultima was crafted to be an immersive experience, but the need to memorise a song off by heart – in order to pull off a daring robbery – struck a chord with Dark Blue Monkey, and the tune he had to learn has stayed with him ever since. 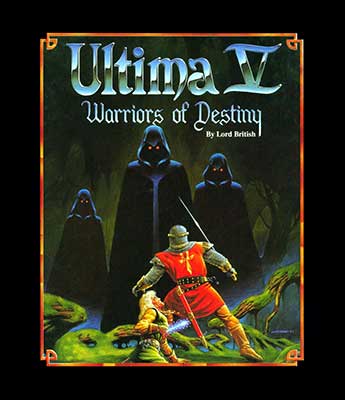 I‘d got home from school at about 6:30pm, wolfed down my dinner and had run upstairs as fast as my legs could carry me. For the whole day I’d been daydreaming, plotting, planning and trying to work out how to pull off a bloodless robbery in the game I was utterly absorbed with – Ultima V: Warriors of Destiny.

Many hours later, the orange street light outside my dad’s study was the only source of illumination, except for the PC’s 14-inch screen. My parents had long since gone to bed, but in reality I wasn’t in my dad’s study anymore; my imagination had transported me to the first truly alive game world that anyone had ever seen… Britannia.

Standing on the parapet with the evening sea breeze whistling around me, I leant my weight against the stonework of the castle wall, peering between the grey stone crenelations, one hand resting on the cold iron of a cannon occupying the space next to me.

Earlier attempts to sweet-talk my way past the guard hadn’t gone well, so after kitting myself out with travelling supplies and vague clues, I’d spent the past week roaming the land, seeking information about the castle’s secret.

A rainy night the previous week, I’d found myself near a lighthouse on the coast many leagues away. Inside was the old court musician, Kenneth, who had left the castle when Lord British went missing. 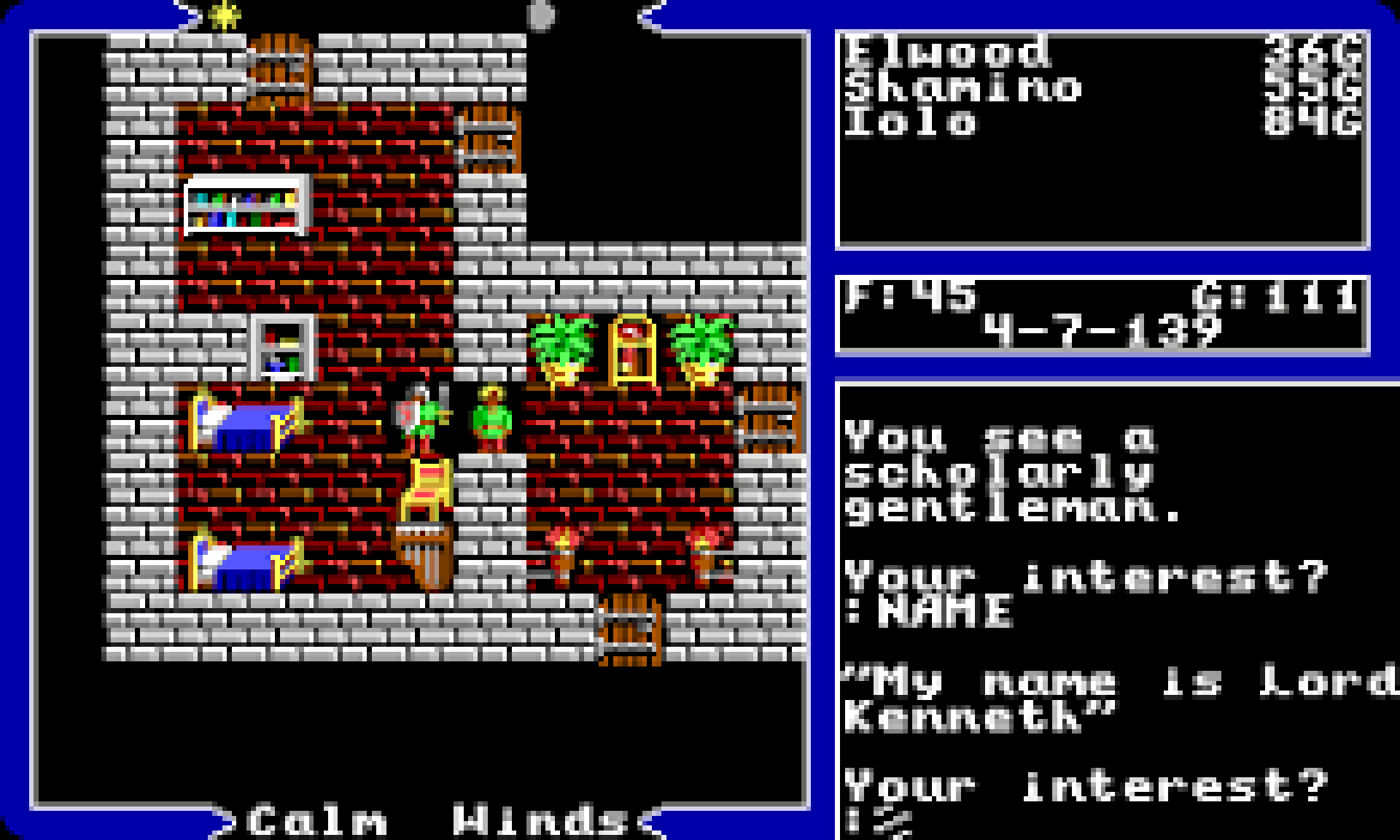 I’d eventually left the lighthouse with a scrap of paper, hastily scrawled with the man’s ramblings… “Walk the Lord’s footsteps,” I’d been told, and “do what he would do.” A curious string of numbers, which apparently was what passed for music in the Ultima universe, described a song called Stones, which I’d seen in the guide to Britannia.

He claimed it was Lord British’s favourite tune and it held the secret to what I needed. The first time I found an instrument in the game, I practiced it over and over until it was burned into my memory.

So here I was, back at the castle walls, tapping out the memorised song as I hummed it gently to myself. I patted my hand on the cold, curved iron body of the cannon one final time, smiling down at it and turned to look towards that final blue-tinged door to the north. The guard was still leaning against the wall beside the door. I imagine he was watching the seagulls that circled above the castle. 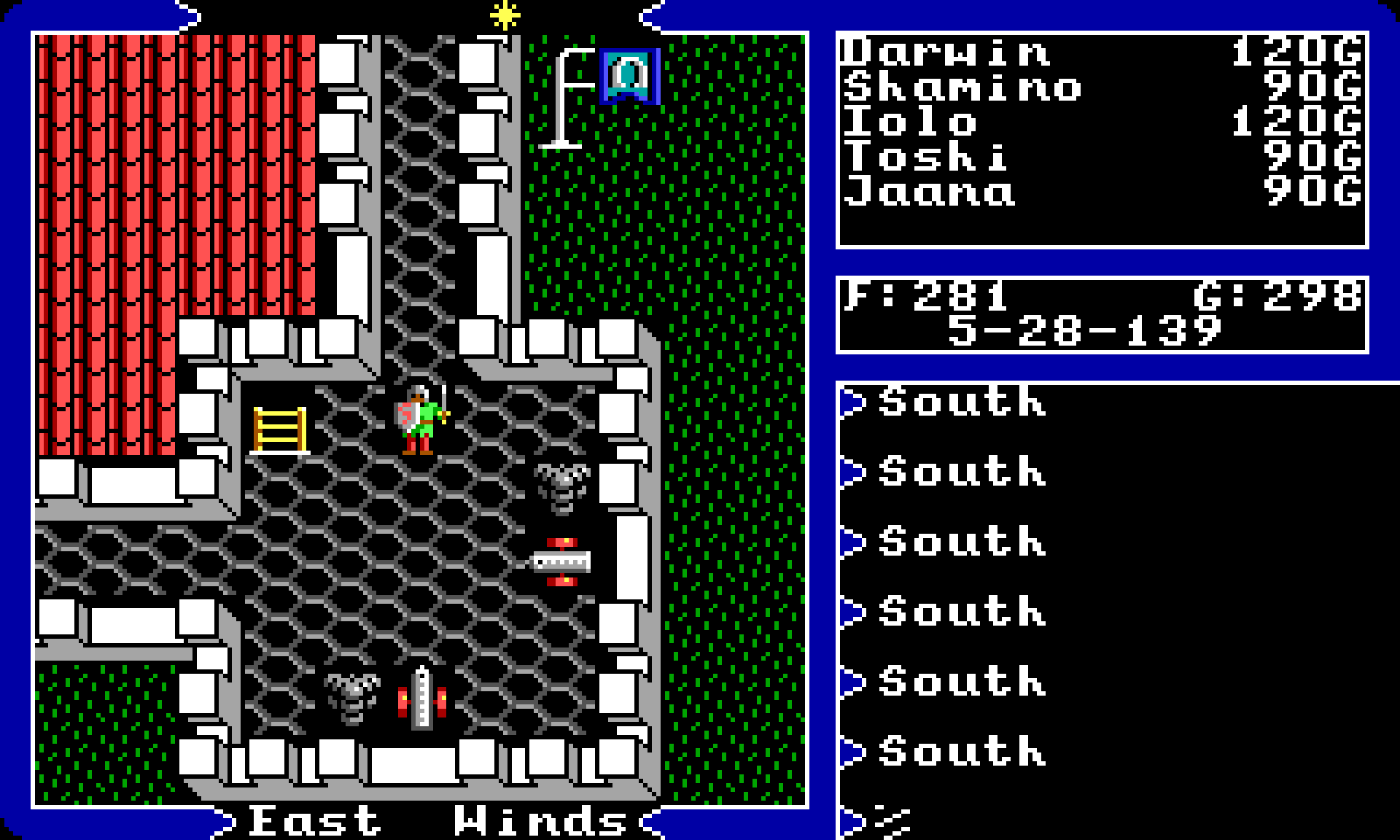 As I stood at the corner pondering, the sun started to dip below the horizon. It was getting late, and the silver crescents of moons Felucca and Trammel were rising to take its place. I walked around the tower, and when I got back to the door, the guard had gone! He must have assumed I’d lost interest in his precious door and left his post, or had to take a leak.

I waited patiently in the rapidly approaching darkness in case he returned, but thankfully he didn’t reappear. The magical blue outline of the door’s warding protection beckoned me towards it as the light level dropped.

I slipped quietly back to the cannon, checking over my shoulder. It was now or never.

With all my strength, I threw my shoulder into the side of the cannon, pushing at its huge weight. It moved! I dug my toes into the uneven stone of the parapet and pushed again.

At any moment, I expected a squad of guards to descend and throw me into the darkest oubliette, but I kept pushing the cannon round, throwing caution to the wind.

Eventually, the cannon was pointing not outward over the battlements, but into the castle. The moons were high in the sky; it had taken longer than I thought.

The cannonballs were surprisingly light – the first one rolled easily into the mouth of the cannon, disappearing into the darkness within.

I lowered the barrel, sighting along it towards the shimmering blue door, my heart pounding with the rising panic of being detected. Breathing carefully, I struck a flint against the stonework and lit the cannon’s fuse.

I barely had a second to dive out of the way before the cannon belched its thunderous boom and slammed back on its frame, surrounded by a cloud of white smoke. 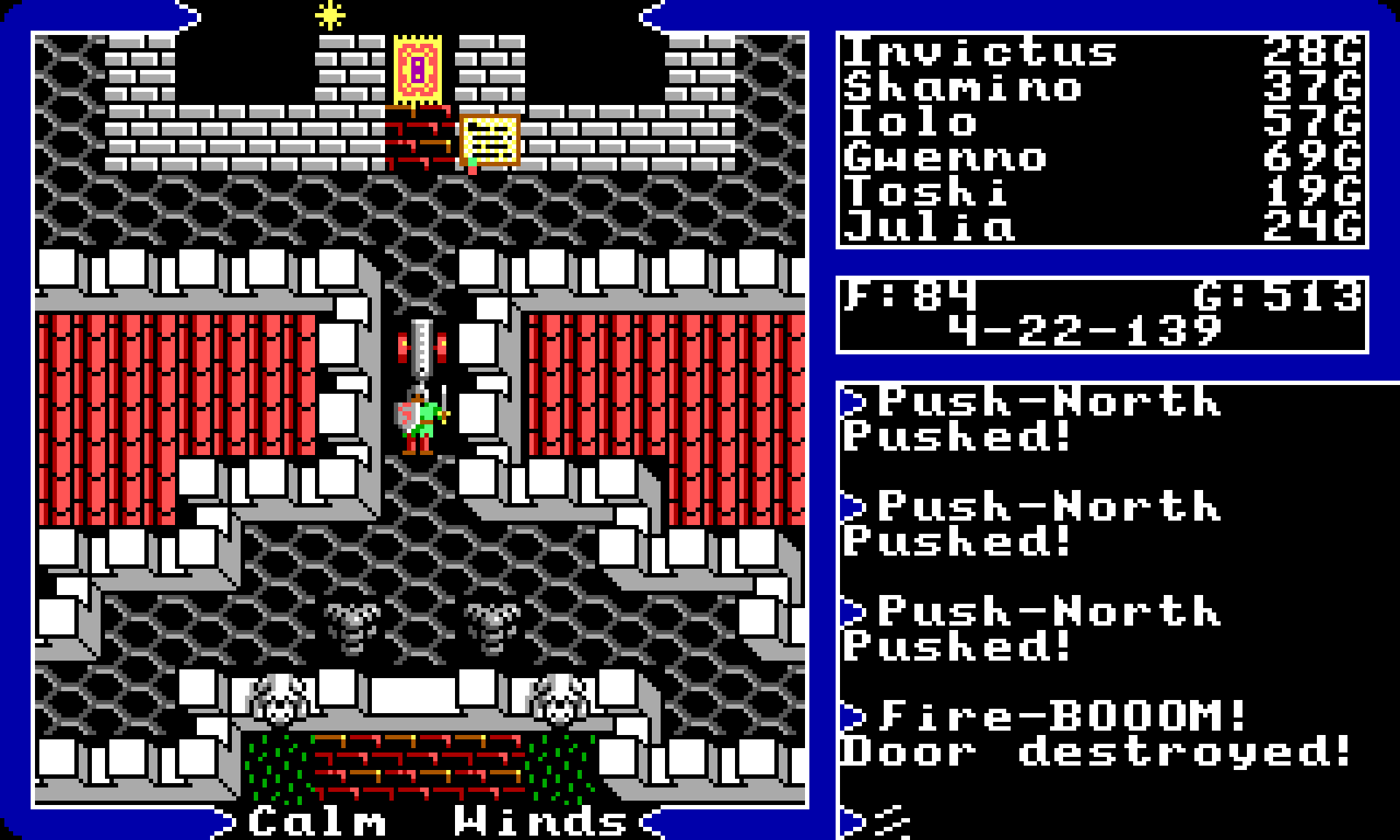 As the smoke began to clear, I looked back towards the door. Where once there had been an impassable blue shimmer, there was now a ragged, splintered hole. I had half expected the cannonball to bounce, or perhaps just dissipate the shimmer. I didn’t expect to blow the door clean off.

I probably had seconds before the guards would come to investigate, so stumbled and ran as fast as I could, leaping over the wooden staves and jagged batons of the door into what appeared to be a warm, inviting bedroom.

In the corner sat a beautiful piano-like harpsichord with a little stool. I looked down at the parchment in my hand: numbers. The music! Stones! Realisation dawned!

Surely it would take them a little while to figure out what happened, but I surely didn’t have time to lose. I threw myself onto the well-worn stool and placed the crumpled paper in front of me above the keys.

“Do what he would do,” I muttered to myself, and gave a wry smile. Being a learned, well-travelled man, he would take a night-time stroll in the sea air before settling down to play his harpsichord!

As the last note rang out on the ancient keyboard, a grating sound filled the room. I scanned around looking for the intruder, my hand hovering over my dagger, expecting to have to defend myself, but instead a secret panel had slid aside next to the grandfather clock. 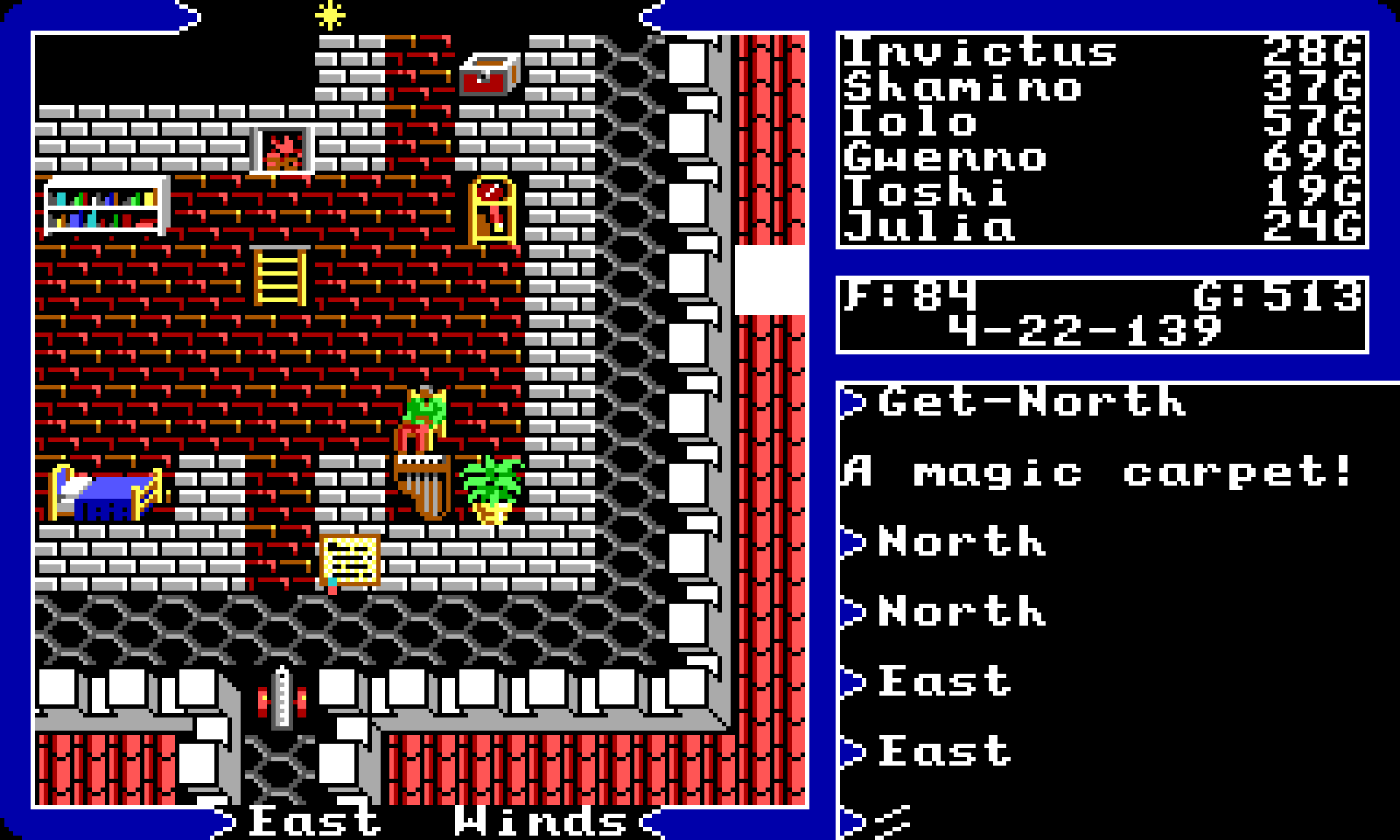 Revealed behind the false wall was the object of my weeks-long search: Lord British’s fabled Sandalwood Box!

I snatched it and fled the scene of the crime. In Ultima terms, I was sure I’d lost “an eighth” of my avatarhood for that act; no positive virtue covered criminal damage and theft!

I ran down the spiral stairs, heart pounding, determined to get this piece of the puzzle to my Lord and extricate him from whatever foul plan the evil Blackthorne had planned.

As I ran across the drawbridge and out into the wilderness with the sounds of shouting behind me, the elation I felt for solving the musical puzzle made me giddy and relieved in equal measure.

Never before had I played a game that required me to use an object in-game that way: to play it like a musical instrument, hear the notes, and solve a puzzle. Stones is a beautiful little melody to boot!

Ultima V was undoubtedly a masterpiece, and over the next few years, which marked my last years before uni, I had played all of the Ultimas up to Ultima VII. All of them after V had contained versions of Stones, incorporating it into the lore and game, allowing you to play it on lutes, flutes and pianos. Resonating with the medieval roots of the game, as well as the wholesome, virtuous quests of the games themselves, Stones continued to be fresh and meaningful to me for years.

When I eventually had to leave home for uni in 1992, it was a highly emotional time for me, packing up all of my gaming stuff and cleaning my room out. As an only child with no friends nearby, walking into my personal riot of gaming posters and shelves of games brought me comfort. Wherever I looked was a memory, with Ultima’s Britannia being my go-to happy place.

So I wrote “DO NOT TOUCH” on the boxes of my games, stacked them neatly in my parents’ garage and said goodbye to almost ten years of my life, as well as thousands of accumulated hours of adventuring.

A scant few days later, I found myself in a city over 200 miles away with no friends, sitting in a bare-walled white breezeblock dorm room, with just a horrid brown blanket and a box of stationery to my name.

Ten years later, I was in a different breeze-block-walled student room doing my PhD, and had eventually brought up my Ultima stuff from home. Once again the walls were covered with my cloth maps. Although I played them occasionally, I wanted to try one of the newer Ultima games instead.

A disgruntled friend, Martin, had told me that Ultima VIII was full of bugs and completely trashed the Ultima lore, so I’d only played Ultima VII and Ultima Underworld back while I was doing my undergraduate studies.

Despite the years apart, the simple little tune of Stones was still my favourite happy-whistle tune – and as fresh in my mind as ever.

In early 1998, I persuaded Martin to look into Ultima Online. He wanted to play something cooperatively, and we both liked Ultima Underworld, so we bought copies and once again I found myself sitting in a room, surrounded by Ultima paraphernalia, entering the world of Britannia.

Slipping into Ultima Online was like finding my favourite lost sweater. The graphics were lovely, the gameplay easy to get into, the interface was ground-breaking, and the music was delightful. Best of all, the landscape, lore and imagery were deeply familiar!

Martin joined the online server, Europa, and we walked around the town of Britain, marvelling at all the other humans scuttling about alongside us. In the real world he was at his house, about ten miles away from me, while we were both dialled in with our 33k modems. 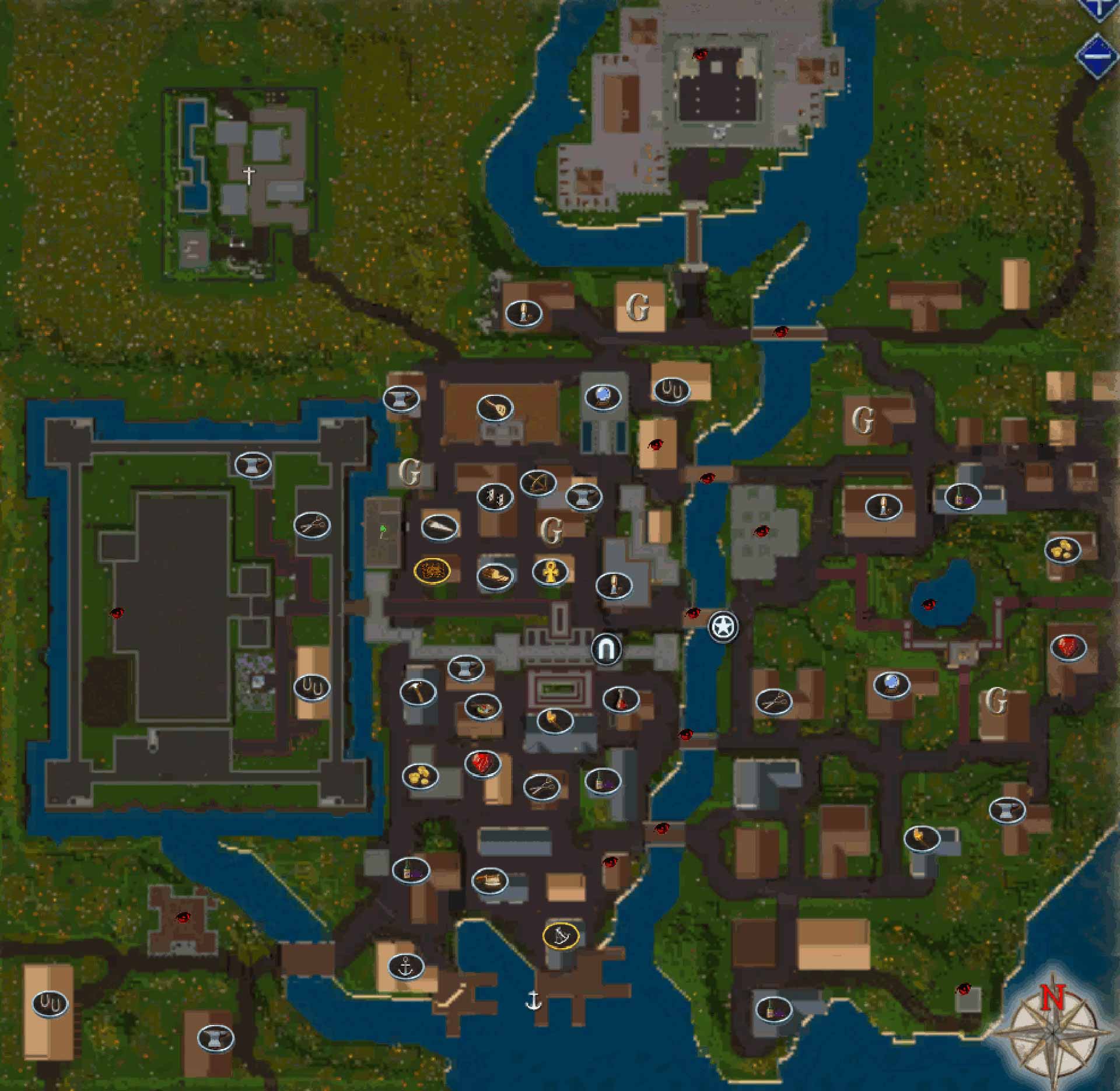 The town music was divine, but as we stepped outside its bounds, the music changed to a lovely little tune played on a harp. It was perfect for wandering through a medieval countryside in the sunshine. Behind us, we could see the stonework of the buildings at the town’s edge drop back as we began exploring the world away from the protection of the city guards. Here, have a listen while you read.

The music became curious, inviting, and then after a slight build up seemed to reach a ‘pause’, ‘backing off’ a little. With a set of trills, it began the intro over again. What was the tune, had I heard it before? It sounded familiar, like a dim memory. It was lovely and soft, gentle even. I found myself walking alongside a stretch of water. Those trills again!

I realised I was standing by the moat of a castle. I had no map but knew immediately where I was… Lord British’s castle, after all these years! I stood and smiled up at those familiar walls thinking back to that explosive raid ten years before. “I wonder if they fixed the door?” I thought to myself.

Just then, the trills happened, but this time the song took a different path. It emerged into its main tune. Suddenly it hit me and I just stopped, my mouth hung open. It was Stones, but reimagined so beautifully and so enchantingly, the tears welled up. I’d been away a long time, had lost, gained and lost friends, and although I was so lonely on my PhD, I’d found home again – and this time, I had a friend to share the adventure.

Stones has been a constant friend throughout the later Ultima games. It’s had rewrites, extended versions, lyrics, acoustic guitar versions and many YouTube videos devoted to it. But it’ll always be the little song I had to memorise to save Lord British, and it’ll always be the first song I whistle when I’m happy; acoustic versions still bring moisture to my eyes every time I hear them.