By Matt Gardner January 2018 No Comments

Music is at the heart of meaningful gaming experiences, but as Tomb Raider proved, you didn’t need a long tune to make a huge mark. 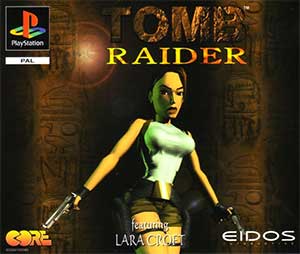 There have been so many moments in games where you don’t need sound to be completely blown away. The combination of rich visuals with the element of surprise has given us unrivalled experiences, such as discovering Blackreach for the first time in Skyrim, going up against Phalanx in Shadow of the Colossus, or emerging from Vault 101 in Fallout 3.

Yet in 1996, nothing up until that point could match the size, scale and challenge of St Francis’ Folly, the fifth level in the original Tomb Raider. As arguably the most iconic section of the game – aside from Croft Manor itself – it was a true milestone in design, and at risk of using language fit only for a wine critic, it weaved the game’s nascent lore into a feast for the senses.

It all started out innocuously enough. Having made it to Greece, Lara Croft’s search for the Atlantean Scion – a three-part pendant of extraordinary power – began in earnest. To start with, St Francis’ Folly was your classic Tomb Raider mix of animals to kill, stacks to climb and boxes to push onto switches, as pressure pads (alongside comically large levers) were apparently the only way to open ancient doors. You shoot some French bloke called Pierre (a good 400 times, no less, but he still kept coming back), drain a pipe, dispatch a crocodile that clearly has no business being near the Mediterranean Sea, ascend a staircase and then…

On top of the world

There you were, at the top of an elaborate six-storey structure, so high up that you could barely see the bottom, but still able make out the folly’s labyrinthine configuration. In that moment, you knew a huge challenge was ahead of you – and a challenge for the PlayStation too, as the graphics were pushed to their absolute limit for the time. Playing for the first time, and as the absolute vastness of the area started to sink in, A Friend Since Gone – a short, sweet and spectacular song by British composer Nathan McCree – kicked in.

Clocking in at just 55 seconds long, A Friend Since Gone is far from comprehensive, yet for me it’s the most memorable tune on the entire soundtrack – even more so than the main theme, which is unforgettable.

The song didn’t serve to intimidate you in the same way the level initially does; quite the opposite, if anything. It enhanced the wonderment of the surroundings, with positive orchestral notes that faded out just at the point you got your bearings and figured out what the hell was actually going on, and where you needed to go.

St Francis’ Folly offered four distinct challenges that reflected fables related to the gods Damocles, Atlas, Neptune and Thor (the lattermost was amended to hammer-happy Hephaestus in the excellent Tomb Raider: Anniversary remake, given Thor was Norse/Avenger and not Greek). This pseudo-historic exploration put you back in a much more “real” world when compared to the four levels that preceded it; by this point, you’d already killed a Tyrannosaurus and a handful of Velociraptors in the temples and valleys of deepest, darkest Peru. Come to think of it, it’s no wonder Paddington Bear made a break for London.

As such, the level proved to be quintessential Tomb Raider, the game at its very best. Yeah, okay, there were crocodiles and baboons and a Frenchman that absorbed bullets like I absorb Pepsi Max, but the four tasks found around this sprawling, pillared expanse were exciting, fresh and clever. The music to kick things off couldn’t have carried fear, urgency or impending doom; A Friend Since Gone had to intone intrigue, hope and courage, which it did to perfection.

Every time I walked into St Francis’ Folly, I’d wait the full minute the song played through before, you know, doing what everyone else did: dive off the highest point of the level to Lara’s death.

Par for the course, and a tradition I’ll always stand by.

You don’t need the London Philharmonic Orchestra to knock out an overture to deliver the atmosphere in a level; sometimes, you just need a minute of time – and music – to absorb your surroundings, as Nathan McCree knew only too well.