By FatNicK January 2018 No Comments

FatNicK’s background in music was still not quite enough to stop him from being absolutely stumped by his discovery of Wiwi Jumbo – one of the stranger tracks from the Space Harrier soundtrack. 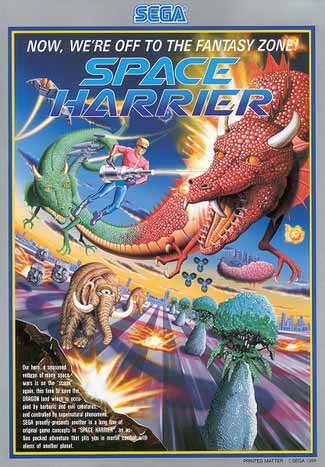 I feel a bit of a fraud writing this. I wish I could say that Wiwi Jumbo was a track that I had a long-held affection for, but to be honest with you, I don’t really remember hearing it on the rare occasions when, back in the early 90s, I used to stumble across a knackered Space Harrier cabinet in one of those seedy arcades you generally find by the sea.

Instead, I discovered this peculiar track many years later while manually ripping arcade soundtracks. Listening back to the music from Space Harrier, one of the tracks I’d uncovered – Wiwi Jumbo  – didn’t seem quite right. I couldn’t recall hearing it in all of the hours I’d spent with the game, and it didn’t even sound like a piece that really belonged on the soundtrack to begin with. My interest was instantly piqued.

Why was I so instantly taken with it? It wasn’t just because it sounded so different to everything else; I was excited because its musical characteristics seemed to be the polar opposite of what you would expect to find in a listener-friendly piece of music.

Anatomy of a soundtrack

Whether you’re creating an epic classical composition or a funky rhythmic groove, part of the job is to signpost the route that your musical journey is going to take the listener on. This is why, even if someone has had no musical training, they can generally feel when a pop song is about to flow from a verse to a chorus.

This kind of signposting isn’t really present in Wiwi Jumbo. The only melodic interest our ears are presented with is a repeating sequence of two minor arpeggios (split chords where each note is played individually). As both chords are minor and five semitones apart, they have a melancholic tinge to them which, as one moves to the other, creates a general feeling is of discord and despair rather than of hope and resolution.

On top of this, the sequence they play is not the kind our ears are used to hearing. Generally, popular music tends to move in nice, easily divisible numbers: a bar contains four beats, a section has 16 bars, and so on. Again, this isn’t the case with Wiwi Jumbo. Here, the arpeggios move in a sequence of five, and – just to add to the sense of irregularity – the third in every sequence of five is partially muted.

This is quite an extraordinary abuse of your body’s pattern recognition abilities. While it is clear that what we are listening to is a pattern, it’s a pattern that is very difficult to follow if the listener isn’t actively counting, making for a weirdly disorientating experience. It definitely feels like that composer Hiroshi Kawaguchi made the conscious decision to use our innate musical expectations against us. 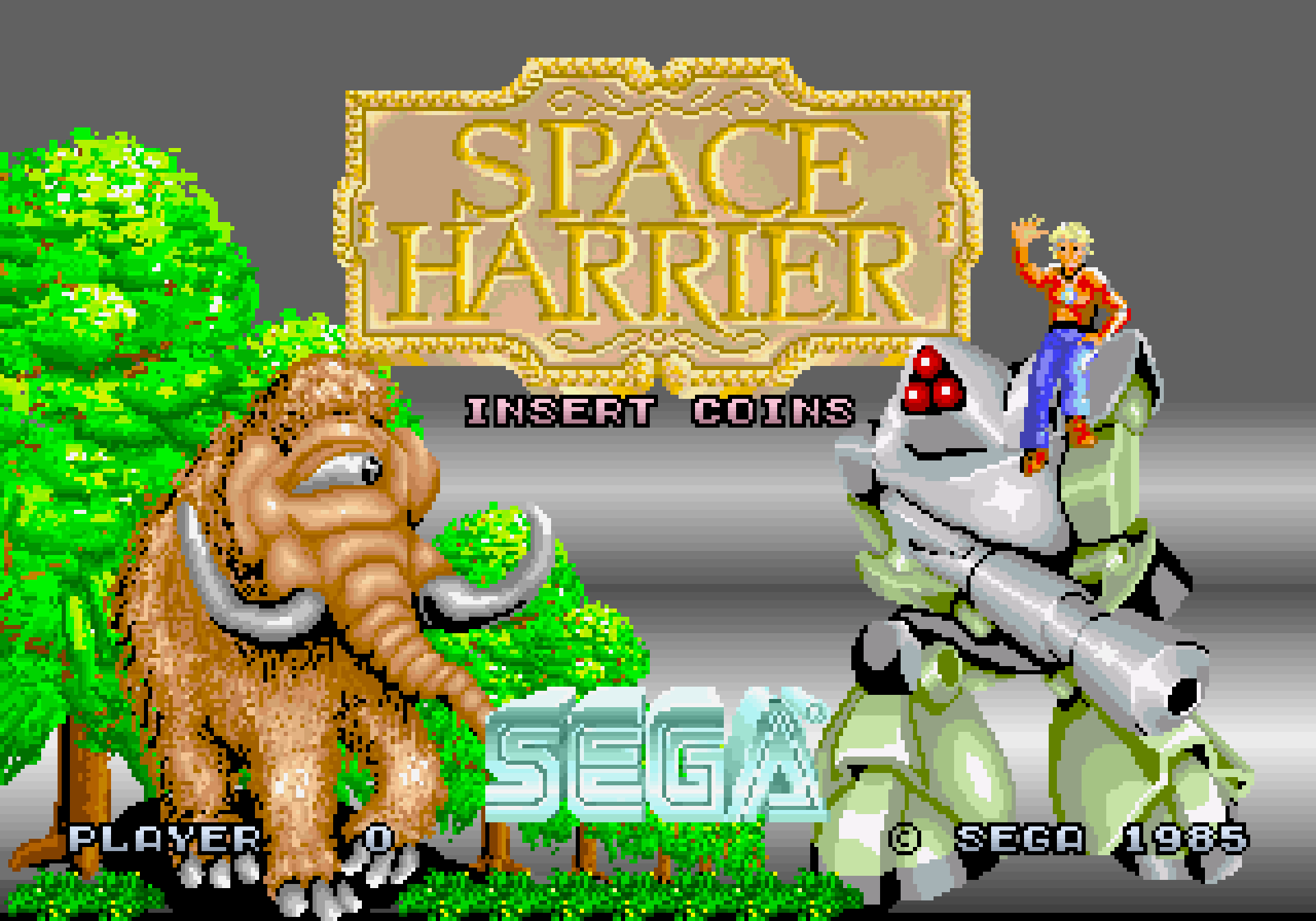 Bass from the bottom of the earth

Along with the bizarre arpeggios, the only other constant in the piece a purring, throbbing bass.  Where almost every other track in Space Harrier has a bassline that is bouncy, energetic and rhythmic, Wiwi Jumbo creates an amazing contrast by focusing our attention on its ever-present drone – something which combines with the arpeggios to really drive home a feeling of purpose and menace.

The bass and arpeggio loops help to make Wiwi Jumbo a most unusual track, but the icing on the cake is its use of sound effects. Cascading over the top – without any particular pattern – we have klaxons, white noise explosions, electronic pings, and all manner of sliding, metallic synth sounds.

As with the rest of the track, there’s nothing to hold onto. These SFX don’t really provide any additional musical context, so their real role seems to be an addition of variation to the piece in a way that plays into the glitch-like feeling of chaos. Put all of these elements together and you have something that feels closer to a piece of industrial noise art, rather than a normal video game backing track.

So there I was, sitting at my desk assuring myself I’d found some sort of weird hidden sound test process. However, I quickly fired up the game itself, just to be certain. If it was there, my limitless supply of virtual 50p pieces would allow me to find it. Luckily, I didn’t have to wait for long; by the end of CEICIEL – the fourth stage – I’d successfully tracked down my quarry. Wiwi Jumbo, it turns out, is a mini boss theme used from this stage onwards.

As with the track itself, its usage is a bit unusual. While most Space Harrier bosses will hang around until they’re destroyed (such as the famous dragon from stage one), the bosses underscored by Wiwi Jumbo are much more transient: they take a few pot shots at the player and leave. This means skilled and unskilled players alike will only hear a few seconds’ worth of the track in the course of normal gameplay. No wonder I hadn’t recognised it! 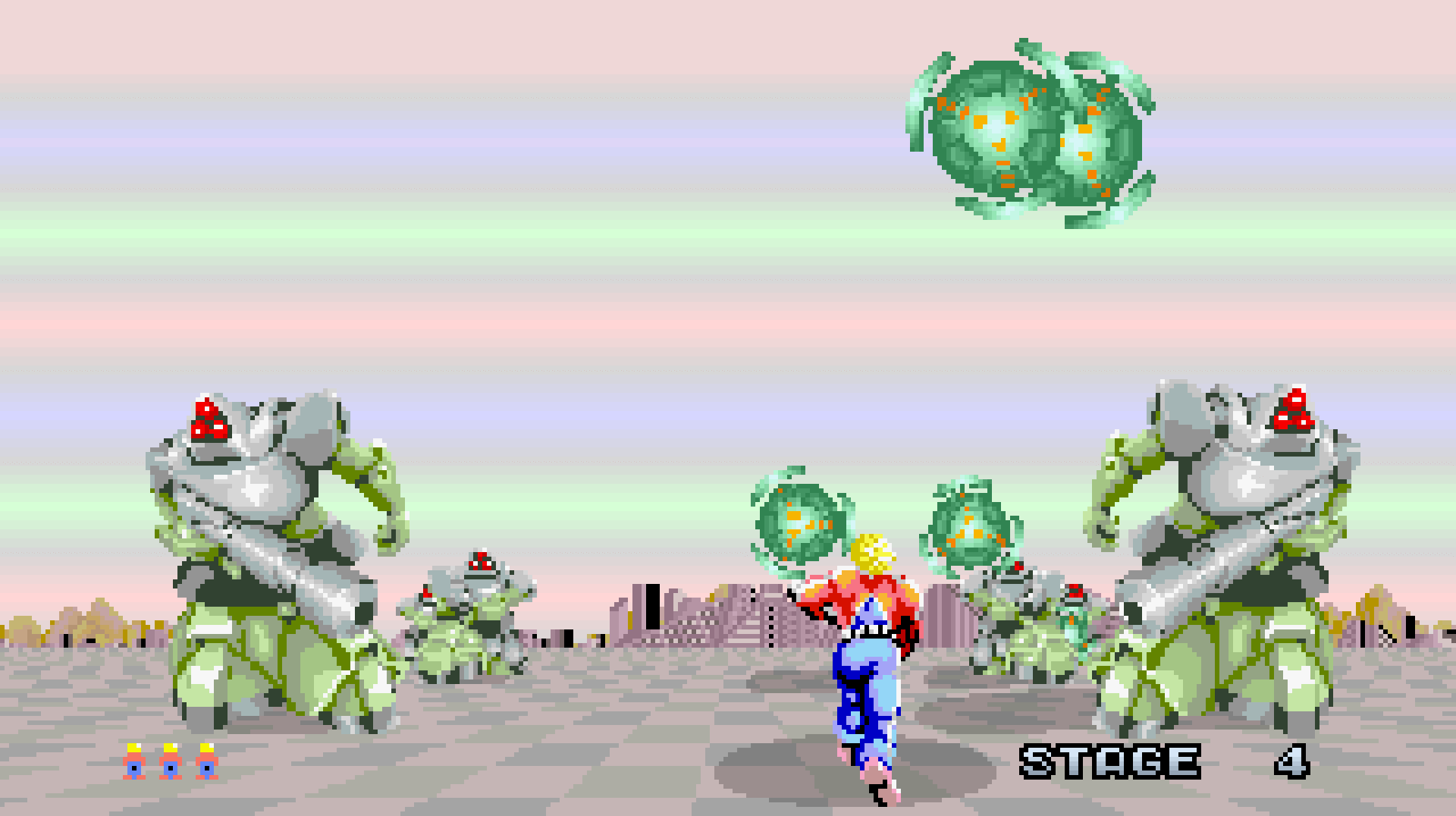 Having realised its presence in the game was so fleeting, I decided to check if it had made it into the home versions.

Though Wiwi Jumbo’s appearance in the original game might have been minimised, those who went on to port Space Harrier definitely seem to have considered it an integral part of the experience. After finding it in the arcade version, I started firing up some other versions of Space Harrier to see how other composers had handled it.

Disappointingly, it didn’t feature in the Mega Drive version at all (which is fair enough – it is technically a sequel, anyway), but I had more luck with the 32X and Master System releases. Where the 32X version an almost arcade-perfect recreation of the song, the Master System versions represent a decent stab at keeping the sprit of the track intact, reproducing Wiwi Jumbo’s three core elements on both of the Master System’s much more limited sound configurations. It even made it into the third-party NES port.

Of all the home ports, however, special mention has to go to the Sharp X68000 version of Wiwi Jumbo. While many of the home ports were heroic but pale replications of the original track’s menace, the X68000 version is a really interesting interpretation. Armed with the same sound chip as the original arcade hardware, arranger Hideya Nagata took things a step further by deploying his own low-frequency oscillation effect on the bass that genuinely sounds like some form of hideous leviathan writhing around on some unseen plane of existence.

Overall, I’m happy I wasted a few moments of precious existence examining Wiwi Jumbo. While you could definitely argue that it is literally superfluous – the role it plays in the game is so small that I doubt anyone would notice if it was removed entirely – I absolutely love it all the same.

From an intellectual standpoint, it seems to be a pretty good totem for what videogame music could be. Foreshadowing the work of great survival horror composers like Akira Yamaoka (Silent Hill), Wiwi Jumbo is an interesting exercise in building and maintaining an air of nagging dread without being able to deploy some of the cheaper tricks that are available to those who compose for more linear forms of media.

But on a much more personal level, there’s something about the music that resonates with me in spite of the track’s surprisingly dark nature. Maybe it’s something to do with the way it contrasts with the rest of the game’s soundtrack; maybe it’s that irresistible droning bass, or the crashing of those sound effects. Either way, Wiwi Jumbo is a compelling track that never prompts me to press the skip button. I hope that, after reading this, you’ll stop to give it a moment of your time as well.

While it’s a piece of music that almost sounds like a glitch, Wiwi Jumbo really showcases the darker side of arcade soundtracks.