By Matt Gardner October 2018 No Comments

Those warm, carefree summers we all remember from growing up don’t often get paired with the perfect soundtrack. For Matt Gardner, Ridge Racer Type 4 provided the emblematic song of the 1999 school holidays: the suitably warm, carefree Naked Glow.

During my life as a gamer, few years have matched up to 1999. Between acquiring (and surprisingly completing) a dodgy Japanese version of Resident Evil 3: Nemesis, falling in love with the DualShock while completing Ape Escape, and being thoroughly paggered by Fujin and Raijin in my first, unsuccessful playthrough of Final Fantasy VIII, it felt like there was little time for me to enjoy anything else in life. 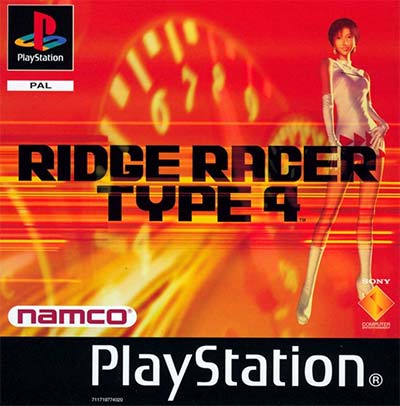 When I eventually ran out of the year’s newest experiences on my PlayStation, I settled the first of many summer trades with my best friend, temporarily swapping consoles so I could get the chance to catch up on the N64’s finest titles, from GoldenEye and Blast Corps to Mario Kart 64 and Beetle Adventure Racing.

However, as late summer approached, I needed my console back desperately – I’d finally saved up enough money for a second-hand copy of Ridge Racer Type 4. I fell in love with the Ridge Racer from the first second I owned a PS1; Ridge Racer was the first thing I ever played on it. Having tried out the limited R4 demo, I was so excited that I willingly abandoned Ocarina of Time at the Water Temple (not the worst place to leave it, admittedly), reclaimed my grey box of joy, and played R4 for eight hours straight.

Since that day, the song Naked Glow has been stuck in my head, and not once has it bothered me.

Song for the summer

While Ridge Racer Type 4 ended up being utterly spectacular, it was R4’s soundtrack that proved to be its most memorable asset. It built off the foundations of its inimitable past with a magnificently diverse, yet still eclectic, line-up of 17 songs. Naked Glow was the second tune on the soundtrack, and it was automatically queued up for race two. I, however, wouldn’t hear it at all until my third playthrough.

The R4 demo had been short but very sweet, allowing you to have a jolly around Edge of the Earth, a track not dissimilar to the neon-lit streets and flat-out straights of Clubman Stage Route 5 from the original Gran Turismo demo. It was paired with Burnin’ Rubber, one of the most iconic tracks on the game (if only for the fact it was on the preview).

I loved the tune so much that in my first playthrough (Micro Mouse Mappy, Assoluto), I chose the song for every race. I wasn’t sick of it at all – far from it. It seemingly sparked muscle memory from the demo, and I largely took the piss out of the opposition, undoubtedly helped by the fact I’d chosen the easiest team to race with.

After seeing the 300+ cars available from different playthroughs, I decided to diversify for championship #2 (Pac Racing Team, Terrazi), picking songs at random just because I had the choice, and because no game told 13-year-old me what to listen to. True to a form that I sadly keep today, I was garbage in grip-class cars, but I still managed to limp home with the championship in a particularly unappealing final vehicle.

And then, playthrough number three came along (Dig Racing Team, Lizard). I’d chosen the toughest team and a carmaker I’d never raced with, but at least it was a drift car. I wanted a challenge. This time, I told myself, I’d listen to whatever it offered me. The first race, accompanied by the inoffensive and unintrusive song Pearl Blue Soul, proved tough but I scraped second.

Then, it was time for my weakest track: Wonderhill. It was finally paired with the developers’ choice of Naked Glow, and it led to one of my few utterly Zen moments in gaming. 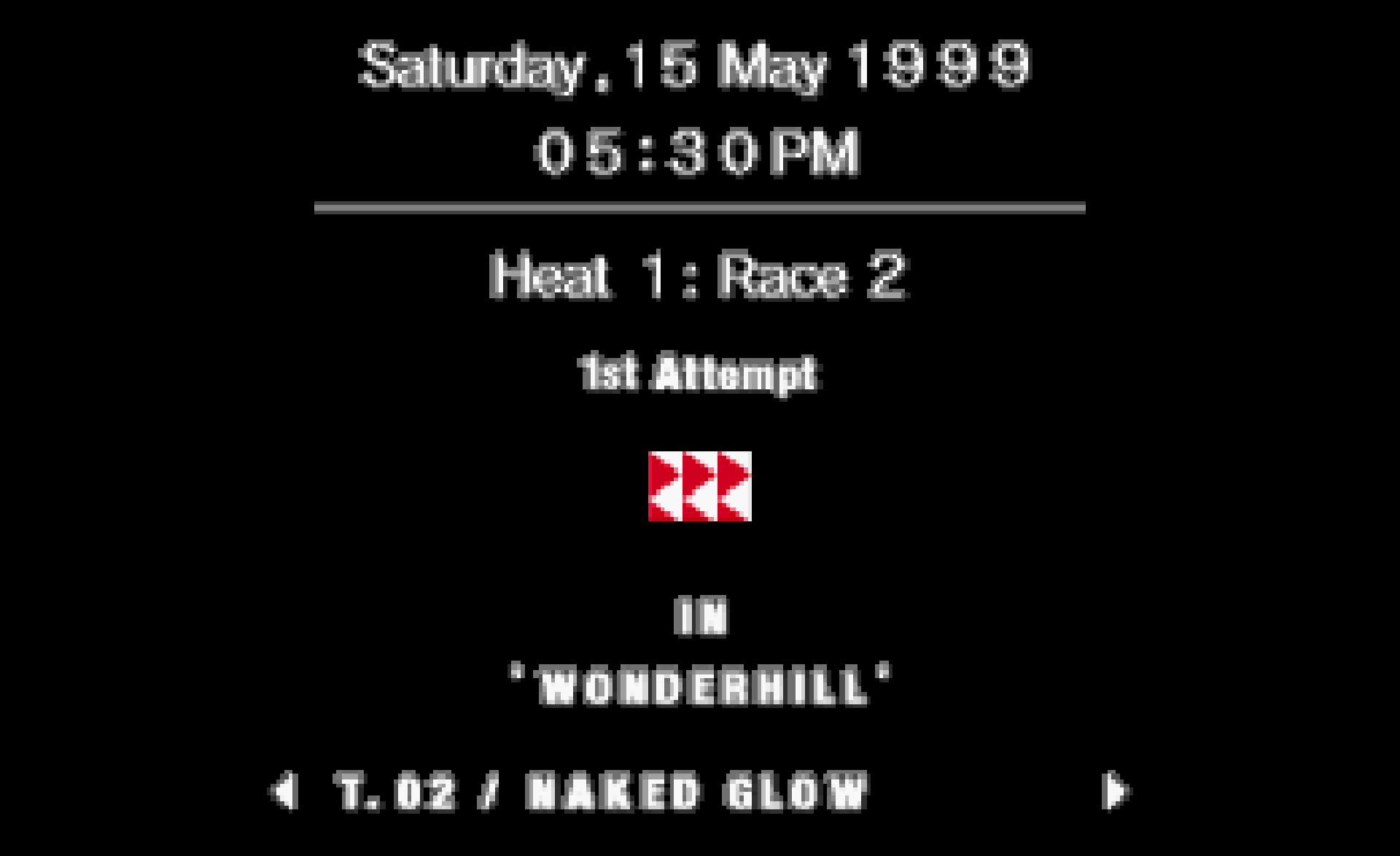 Wonderhill was, and still is, a little bitch of a track. This is mainly due to an infamous spiral right-hander in the final third, which kicked you into a deceptively sharp final turn, and only a perfectly timed drift could negotiate it. Alongside that, it closed with a snake-like chicane before the final straight, which made overtaking nigh-on impossible; just getting second place often proved to be more luck than skill.

Yet the backdrop and setting of Wonderhill was very true to its name – it offered beautiful vistas, a warm and welcoming palette of oranges and greens, and the occasional stunt pilot who happily fucked about in the sky from lap to lap. The circuit was a wolf in sheep’s clothing and needed the perfect song to convey as much.

This was emphasised perfectly by Naked Glow, which immediately sprang into life with a Deodato-like acoustic guitar, backed by a small string section and what I can only assume was an early recording of Ron Burgundy on jazz flute. It was cool, calm and collected – just what I needed to settle my nerves in my latest challenge. Yet the fundamental way R4 worked meant you couldn’t just “have a good first lap” and run away with victory – you had to be totally consistent, much like the spacing between your seven competitors.

Like every other track in Ridge Racer Type 4 (and every RR game prior to it), Wonderhill suffered from the series’ approach to “racing”: developers made all seven cars fly off the line at the start and disappear at impossible speeds. You’d then encounter them at equidistant points over the two laps, where they never made mistakes, would hug the racing line, and solely served to get in your way on critical turns. 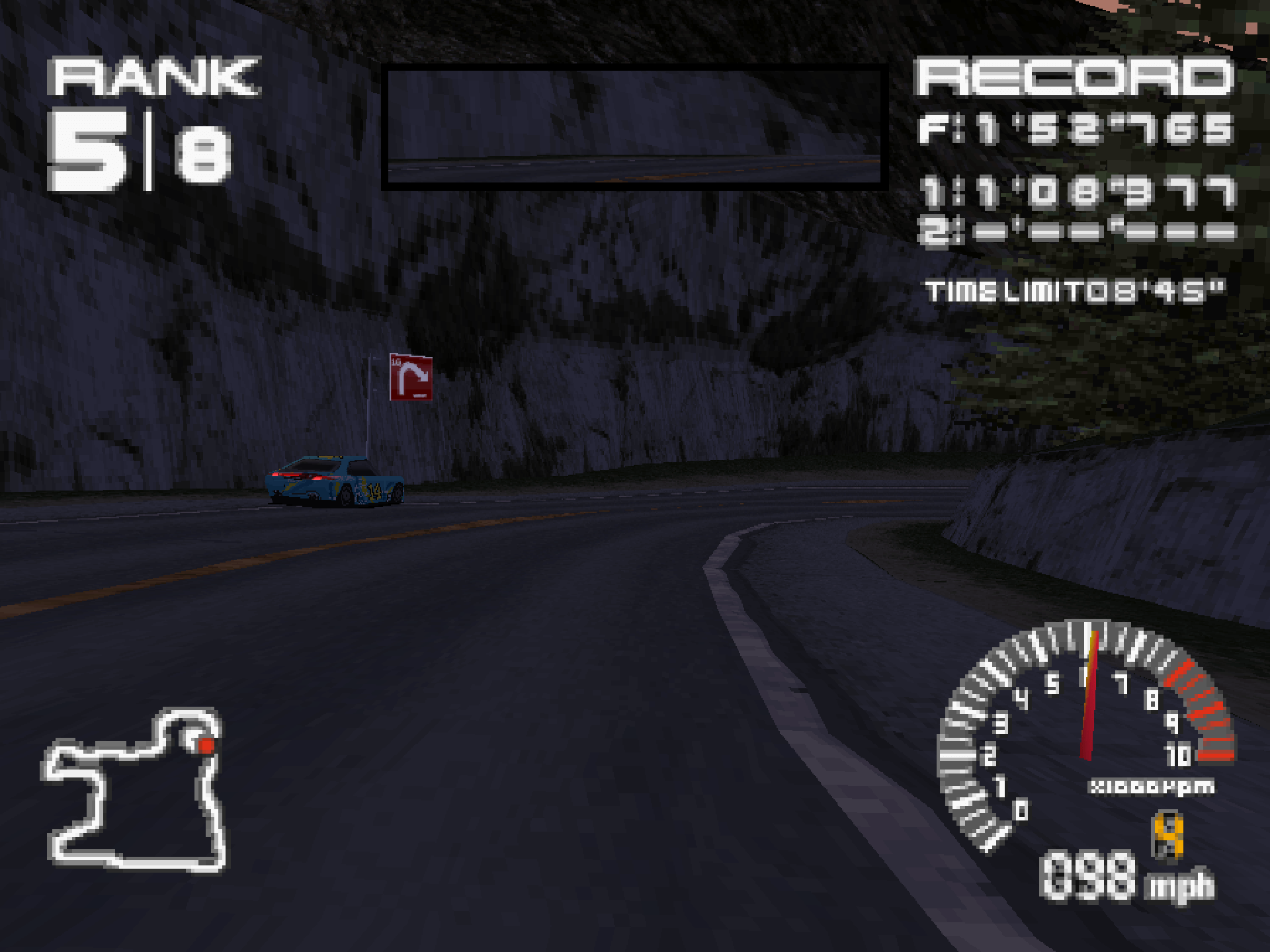 My own racing line on Wonderhill had previously been non-existent – and it only took two camera-shaking crashes to put severe doubt on your first-place finish. Upbeat songs like Burnin’ Rubber had not been encouraging; if anything, they put more pressure on by being way too upbeat. This time, the dulcet tones of Kohta Takahashi and Naked Glow immediately put me at ease. It centred me, and for the next three minutes and 15 seconds, I was utterly perfect.

A lot of this was down to Naked Glow’s sectioning. Wonderhill was a two-lap race that took around 3:15 to complete. Meanwhile, Naked Glow was a three-part song that coincidentally took 3:15 to loop back to the start.

As it hit the minute mark, Naked Glow escalated the mood without denting the overall feel of the track. A brass section burst forth with surprise and excitement, backed by piano, bass and pretty much everything else in the recording studio. As the madness unfolded out of the speakers, the road spun into tight circles, wobbled out into chicanes, while the once-encouraging song wound down to something altogether more morose; it reminded me of the dangers I still needed to overcome at the front of the pack, and it empowered me to knuckle down and fight to position four.

As the second lap progressed, my competition was nowhere in sight. I worried that I had no chance of finding them – I was racing for the worst team, after all. Naked Glow switched to a different mood entirely after 2:30, uplifting into a more positive-sounding, orchestral tune. As I managed to squeeze past the race leader on the previously impassable chicane, the excited brass section finished up, seemingly celebrating my success. It was like the music was responding to my every move – or controlling them. The song looped back to the start as I pulled over the line, as if it was all a dream.

I was sweating from a mixture of the late-afternoon heat and the sheer excitement of winning Wonderhill for the first time, and my feet kicked excitedly against the carpet of my bedroom floor, forcing my mum to shout up the stairs to stop making such a bloody racket. It barely registered; I won, I screamed, I got told off again, but I didn’t care. I’d raced the perfect race. All because of Naked Glow.

There’s no way that Naked Glow was composed without Wonderhill in mind, but the song also enjoys such enduring perfection when paired with any of the other tracks in Ridge Racer Type 4 that it has to be the best song in the game – if not the series. While a lot of Naked Glow’s impact is helped along by R4’s laid-back style, simple-yet-effective story mode and beautiful world-building qualities, its composition makes it a classic both in and away from the game.