By Matt Gardner October 2017 No Comments

Ridge Racer had a limited soundtrack, but it made the most of this limited resource – especially after the race was over.

“Grrrreat job! I’ve got everything on camera so you’ll watch it later, huh? Yooouuuu’re the GRRREATEST!” 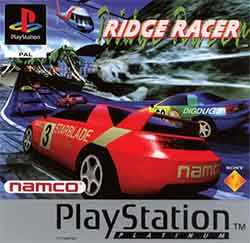 With the exception of its traditional-sounding title track, Ridge Racer’s soundtrack was absolutely mental. Originally produced in 1993, Namco’s line-up of tunes was heavily influenced by the techno and rave scene in Europe – and subsequent sequels never quite matched its hardcore approach.

On one hand, you had the absolutely ridiculous Rotterdam Nation, named after the burgeoning gabber scene in the Netherlands which clearly inspired its style. On the other, there was the panpipe-and-piano-tastic Rare Hero, which became such a hit that it was remixed for another four games – the most recent being the Ridge Racer PSP outing.

You had your favourite two or three tracks, and that’s what you stuck to. But one place you had no choice in proceedings whatsoever was once you’d completed a race, and it handed over to the odd, smug announcer, who would rarely crop up in the race itself (notably, on a perfect start, and when you did a crafty bit of perfect cornering).

The voiceover’s cue came at the end of a winning race, just as the weird siren signalled the start of the Race Results tune. Here, I’d always shout the inevitable announcer’s “Yooouuuu’re the GRRREATEST!” line, ignoring the rest of his American drawl because it wasn’t intelligible enough to repeat, then gear up for 45 seconds of self-flagellation.

Race Results’ “tune” lasts for 36 seconds, before giving way to an endless loop of harsh techno drums. Here is where I’d carry out my patented, furious, angry dance, combining key elements of head-banging and that bit in the Single Ladies video where Beyoncé and her dancers punch the floor. I’d do this exact dance every time, without fail, until I started to go dizzy. It never got old, though I’m sure I’ll have one question less to ask the doctor when they deliver some bad news for me in 30 years’ time.

The song didn’t match the circumstances whatsoever. While the synthesised percussion blared, you watched your best lap play out, with only you and your “rival” visible, while the same fixed camera angles played their respective corners. That is, if you were watching it, and not doing my trick of throwing woeful shapes at the ground.

Songs certainly don’t have to be good to be memorable, and with Race Results, there was no way of forgetting what you heard, even if you hated it – after all, you were forced to listen to it every time you finished. It’s effectively Stockholm Syndrome.