Real life: it’s stressful. That’s part of the reason we play games – to unwind. And there’s nothing short of a real chill-out than with one particular track from Rare’s 100th release, which offers a much better alternative to fancy relaxation CDs.

Star Fox Adventures received a somewhat positive, yet still mixed, response when it was released in 2002. Some people found it strange – a Star Fox game that had Arwing sections as a seeming afterthought – while others lamented it for being too much like a Legend of Zelda game. I personally loved it, in no small part thanks to its fantastic soundtrack. 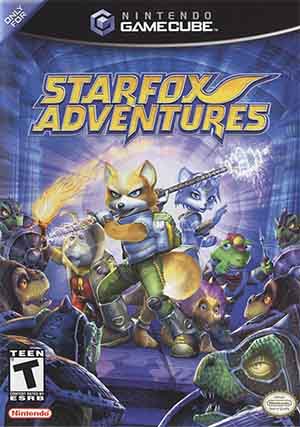 I first owned the game in 2002, just after I’d bought a GameCube with wages from my first job going through college, following a recommendation by a lad on my course. It was an immediate hit and you could tell from the word go that there was a real level of detail in the audio. It would be a bit further into the game that I’d really appreciate this, with one of the best VGM pieces I’ve heard to date.

The introduction to LightFoot Village and the reclusive, spiritual yet unfriendly LightFoot dinosaur tribe was a pretty intense affair; Fox McCloud is tied to a totem pole, ‘convicted’ of thieving from the tribe. He’s sentenced to death via spearing, but is eventually saved by a passing CloudRunner. This did little to give away the laid-back masterpiece that came when it was time to explore the village once the initial drama was over. Opening notes were so subtle you barely heard them over the birds chirping – a fantastic effect that really captured the feeling that comes with the track.

The first notable part was the five-note piece which featured throughout, and it captured the million-miles-from-civilisation vibe perfectly. Visually, it was perfectly complemented: a misty autumnal tree village over a massive lake. What followed was something that resembled traditional-sounding drums which subtly phased into the track, led in with a synth brass effect that gave the listener a feel of exploring an undiscovered jungle.

Further in, this more dominating effect took a back seat to make way for a section that had a steel drum vibe to it. Quite how David Wise got all these instrument sounds to blend together so effortlessly is testament to truly special skill; it really did sound amazing, yet there was still more that this piece.

Just over halfway into the song, it stepped up a gear, with a single instrument dominating proceedings: wooden pipes that were clearly being played by a true master of their art. This built up to a wonderful finale: the unmistakable sound of a string section playing a composition that brought me a feeling reminiscent of daybreak; a morning mist hanging over a faraway Zen heaven. It was perfect for LightFoot Village.

One of the main tasks of the level demanded you earn the trust of the LightFoot Chief in the Tracking Test, which gave you two minutes and 30 seconds to activate four totem poles scattered around the village. This section had its own VGM, a remix of the original which kept the vibe yet added a real sense of urgency. Suddenly this laid-back tune took on a tempo that wouldn’t be out of place in a Rocky training montage. This separate take on a classic Star Fox tune would fit into anyone’s workout playlist; how such a chill-out track can become so is once again a true credit to the skill of Wise.

LightFoot Village also featured in the game’s Walled City stage, where our heroes retrieved the third SpellStone and, later, the fifth Krazoa Spirit, before Fox and Tricky parted ways. You often don’t realise, when you get so involved in a huge adventure game, how attached you can get to the characters – yet when LightFoot Village started up after that cutscene, it carried the feeling of a new dawn and a new day without your little buddy by your side, a moment which I found pretty poignant the first time I played.

The recommendation I was given to try this game was a fantastic piece of advice. When it comes to VGM, Rare composers have always been a cut above. Is this the best piece of music the company has ever produced? Obviously that’s open to debate, yet in a game filled with relaxed musical scores, it truly set itself apart. It’s still absolutely brilliant to listen to when meditating or just chilling, and might just be among the all-time greats of laid-back, Zen-like music in video games.

It’s hard to do this song justice. “Masterpiece” is too often used by gamers to describe any song they like. Even if you don’t like LightFoot Village, you’ll appreciate the heart and soul that’s gone into it. In light of this, maybe it’s time to rethink what makes a VGM track a “masterpiece”?