By Matt Gardner December 2017 No Comments

Matt Gardner learns that doing some research into a banging tune can often lead to it becoming a little unpalatable.

It was only a matter of time before a music-themed game made the list of VGM favourites, and one particular title had a handful of absolutely cracking tracks. As the best-known game in an otherwise crowded fighting/rhythm-dance hybrid genre, Bust a Groove had plenty of faults, but its soundtrack made the overall experience unforgettable even now, nearly two decades after its release. 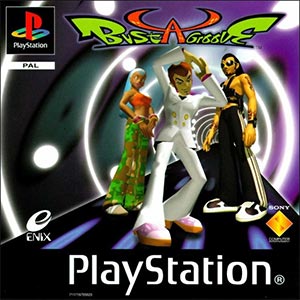 And it’s the game’s fastest song that proved to be the most memorable to me. The 140bpm Chemical Love, which played during Gas-O’s stage, is both loved and hated by fans of Bust a Groove. While it was a solid, unique song, it also gave you the smallest window to hit the beats you needed to keep dancing, so it was usually responsible for the vast majority of mistakes in a single-player run.

This high difficulty was especially frustrating because you only had to memorise a few combinations of directions to get the big points, whichever character you were. The song’s slightly off-timing on the final button press was already a little frustrating, but when the harder permutations came up, it often became nigh-on impossible.

As such, it was tough to pull off that all-important level-seven freeze – the final pose in the highest tier of dance moves – by hammering ↓ ← → ↑ ←  and X in such a restricted window. Still, the feeling of accomplishment of doing this on Chemical Love – especially for the first time – was unrivalled by anything else in the game. 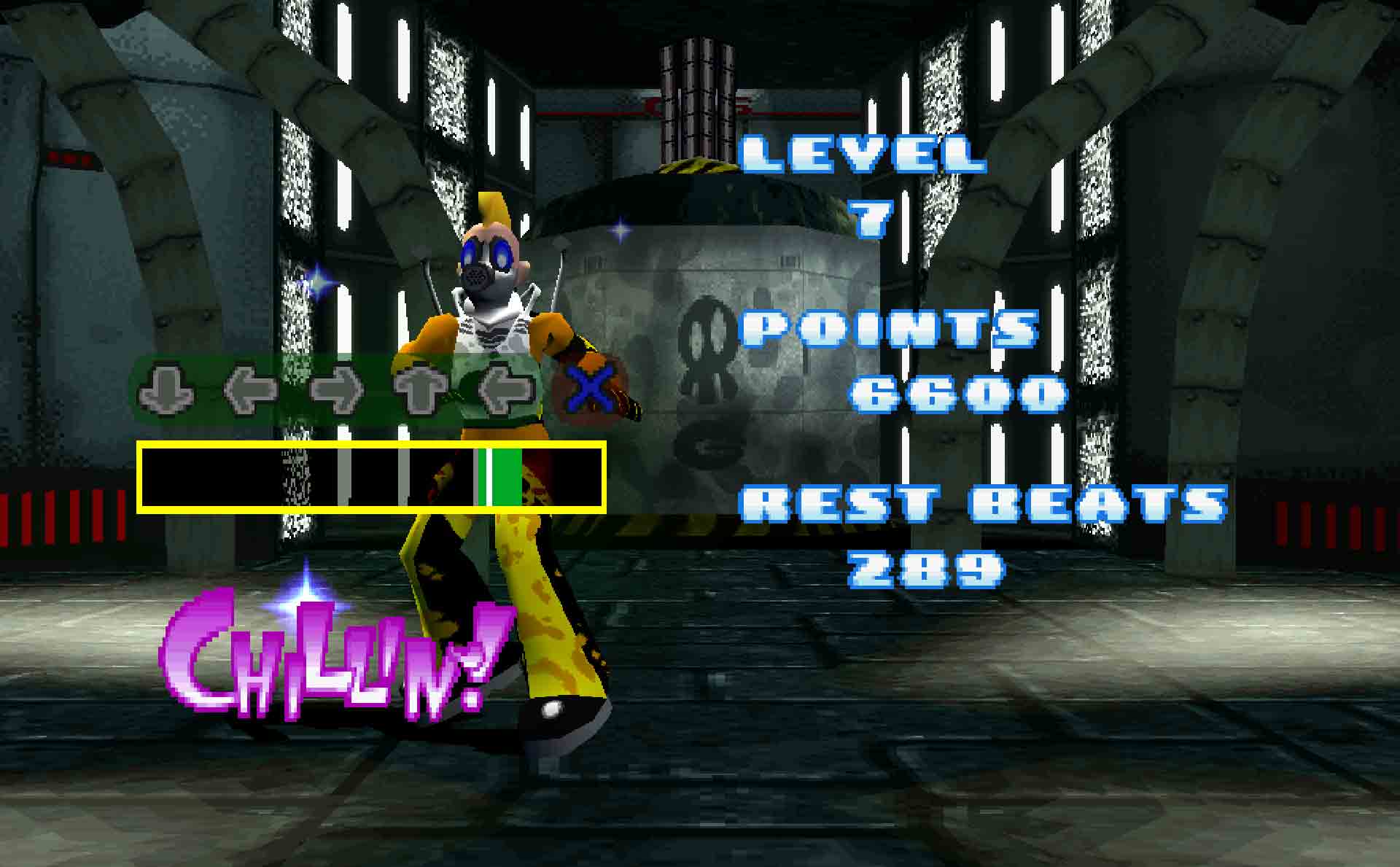 You see, the other eclectic characters of Bust a Groove all had a very different style of music and dancing, but they never quite hit the mark they intended to. Pinky’s Motown song I Know was somehow meant to reflect her background as a stripper, contract killer and tarot reader. Meanwhile, Hamm’s Detroit modern I Luv Hamburgers reflected the fact he was a fat bastard, who made his dog flip his never-ending supply of burgers. The dog making burgers was called Burger Dog. Pulitzer Prize-worthy writing.

Yet Chemical Love matched the mystery of Gas-O so perfectly. The strong, barely intelligible house tune went well with Gas-O’s anonymity behind his futuristic raver-style gas mask, which made him look like a family-friendly Psycho Mantis on a Saturday morning kids’ show. His cylindrical lair had an undercurrent of The Crystal Maze’s Industrial Zone, and provided a nice contrast to the eye-bleedingly bright stages of Hamm, Kelly and Kitty-N. 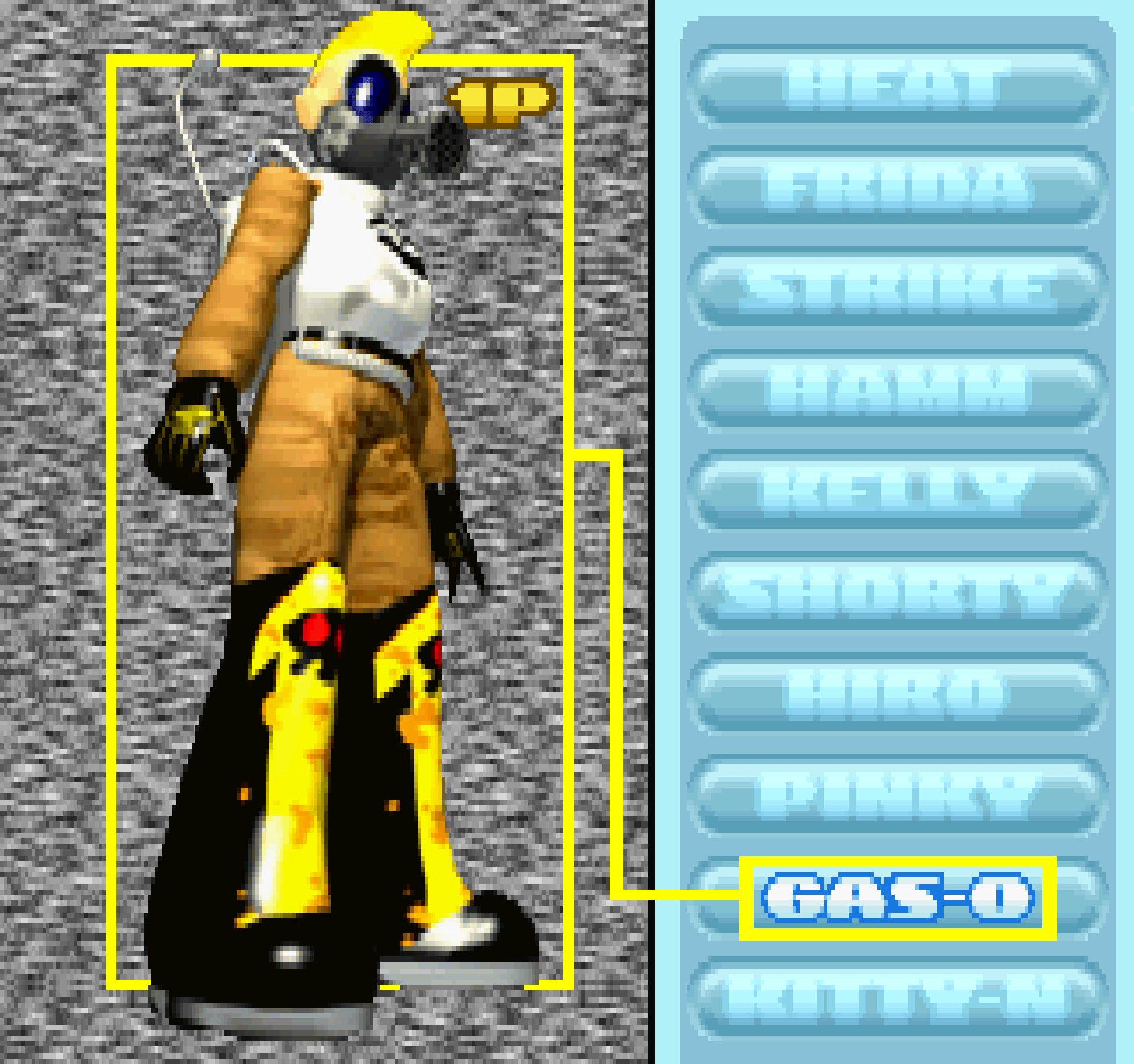 What really made the song special was its opening minute. It delivered a banging bridge from the first second of dancing, with fluid (yet hard-to-hear) female vocals that made up most of the actual tune, as the rest was bass, drums and string-section-esque SFX. It was manic and non-stop, and built up wonderfully to glorious chorus.

Chemical Love then segued into a bang-average rap segment. Now I love rap music, but when you can’t hear the lyrics – especially during a high-speed dance battle – it’s not exactly relatable. Still, by this point, I’d always be well ahead of the computer, or my friends. This was the level I’d always beat the competition on. It was the one friends’d always groan about when I picked it. It was also something that coincided with my then-new-found love for EDM, or at least the teen-friendly sort of EDM found on Wipeout, and across the Chemical Brothers’ first three albums. Great memories.

But reliving the song got me thinking past simple enjoyment of the song. What was Gas-O all about? What were his motives to win the dance tournament? And most importantly, what was his ending video meant to signify?

Bust a Groove’s character-specific outro videos were outright weird, and generally didn’t make sense. For example, Strike just straight up murders a load of policemen. But if you won with Gas-O, you got a ten-second video where he basically plugged himself into a gas canister and, I’m ashamed to say, seemed to just shart. Like, massive brown cloud, camera fade out. That’s it. Seriously, check it out (in gloriously terrible quality):

When I consulted the magic of Wikipedia earlier (and then fact-checked it against real sources, too), it revealed that “Gas-O first became interested in becoming a scientist when he was eight”. Okay, cool. It continues: “Now at 15, he has accomplished several outstanding tasks, including consulting for NASA, logging time on a particle accelerator, and studying the gaseous elements in his laboratory. Gas-O hopes to use the Groovetron to develop the ultimate gas.”

Working for NASA, yeah? Ultimate gas, eh? This aspirational child prodigy clearly wanted to share his love of science with humanity and work towards the greater good! Surely the lyrics must reflect this desire to advance the species?

Drop, KA-BOOM! Hear the hiss?
Can’t you feel that deadly mist is comin’ your way,
Thanks to me
I’m Chemical Love and I’m pleased to meet my next victim
Come on, take a taste
Mess with me and I’ll bomb this place with
Dance moves so gimme room
While you breath in my deadly perfume

Okay, so Gas-O was talking in metaphors – he’ll “gas” the opposition, I assume. Given he’s 15, I imagine his “deadly perfume” is BO, and the only “bomb”-like terror attack he’ll be wreaking is through lightning-quick dance moves on the parquet floor. Gotcha.

When I drop to the floor,
That’s when I pump some more,
Gases into your body
You can’t compete when I bomb the party
Sarin monoxide is free if you got the nerve to fight me so,
If you do, beware, ’cause,
Chemical Love put the flavour in the air!

Sarin gas doesn’t get mentioned often in post-WWII game music. I guess that much like Bust a Groove itself, Chemical Love isn’t perfect. Maybe I should’ve realised the whole thing was a bit wrong a little earlier, given that Gas-O’s fighting move was trapping his opponent in a fucking gas chamber.

I’ll probably skip the rap from now on.

Well, great tune aside, Chemical Love was definitely darker than I remember.