The music of Super Mario 3D World has aged incredibly well in the five years since its release, but in the case of Beep Block Skyway, its legacy has been tainted by something a lot less wholesome – as Matt Gardner learned to his horror.

Of all the songs in Super Mario 3D World, the utterly wonderful Beep Block Skyway is the one track you’ll definitely get into the groove with. Sadly, one dark corner of the internet made sure that various characters from the Nintendo Universe would also, quite literally, get their groove on to the very same tune.

As the internet teaches us every single day, all good things can be corrupted. However, it’s entirely unsurprising that the inimitable leitmotif of Beep Block Skyway would be used in such a way: funky to the point of sexy, it was only a matter of time that someone would see the song as sexy to the point of animating interactive, interchangeable sex scenes to it. 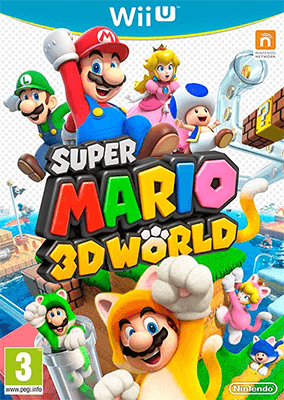 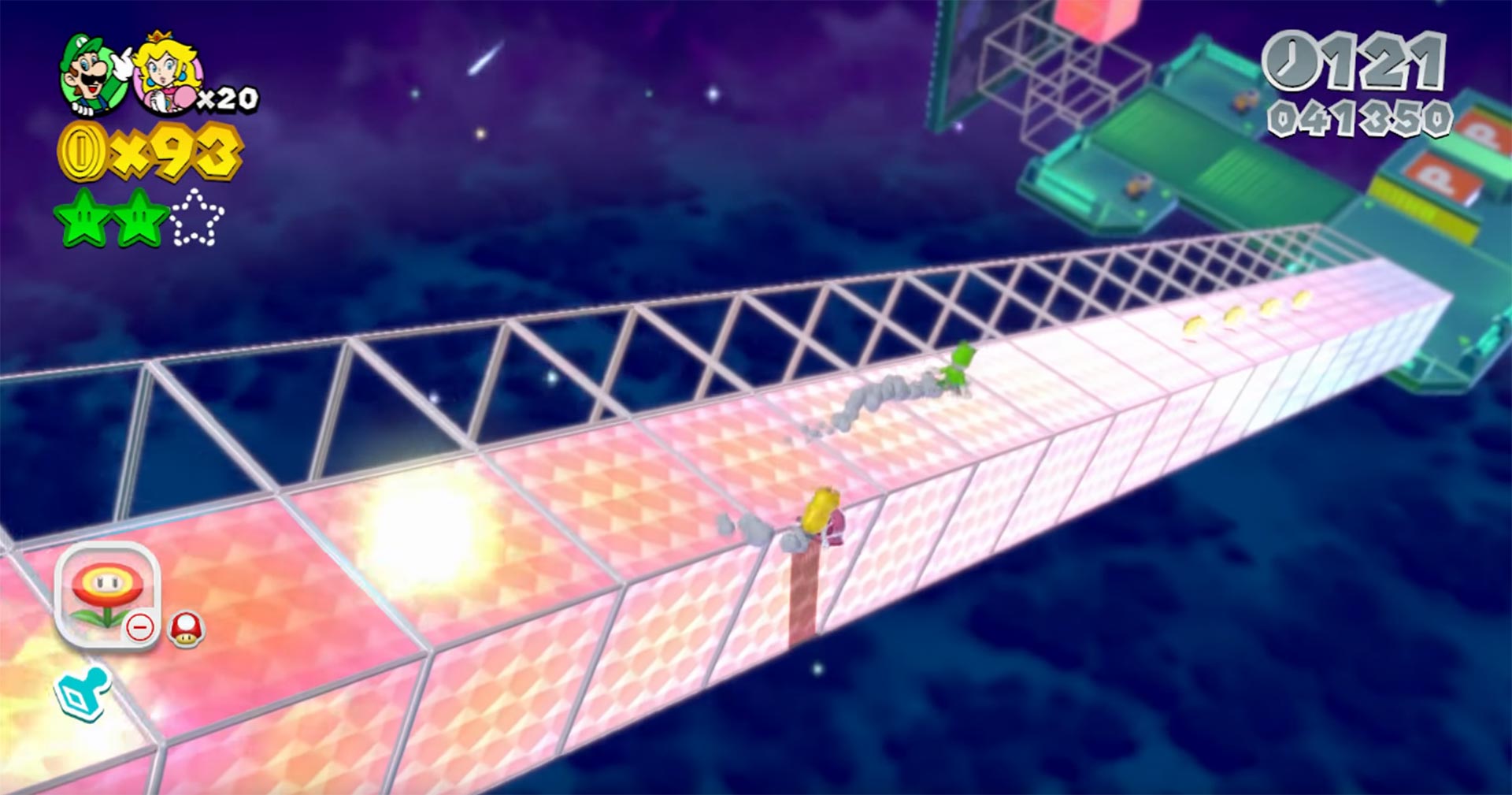 Getting back to what I knew

As has been the case with every 3D Mario game since the release of the N64 back in 1996, Nintendo found plenty of ways to raise the bar with both game and level design, bringing us such highlights as:

Fast-forward to 2014 and Super Mario 3D World was finally posted through my door, bringing high expectations with it. Despite solely being an Xbox gamer at the time, I’d come to expect so much from the franchise that SM3DW – alongside Mario Kart 8 – was enough to turn the thumbscrews and force me into buying the Wii U on MK8’s launch that May.

Within mere minutes of playing 3D World, I was transported back to several moments in my life:

Each one of these moments was characterised by that unbeatable feeling of childlike excitement, which I’d simply not felt in the four years I’d dedicated to Microsoft and Sony, even with daft but charming games like Beautiful Katamari.

Yet it still felt like 3D World was missing something. After a solid six or seven hours of gaming, there was no doubt it had flawlessly combined the more traditional, pre-Galaxy Mario platforming experience with all the bells and whistles of the super-smooth, 1080p standards delivered by the criminally underrated Wii U. But while it was a comforting blanket of colour and precise design, it lacked the technical wizardry I’d come to expect from modern games in general.

I knew that Xbox gaming lacked Nintendo’s charisma for the most part, but it brought huge leaps in innovative storytelling and world-building that Super Mario 3D World had lacked. I was coming in hot from incredible experiences like Fallout 3, Spec Ops: The Line and Portal 2; the game just hadn’t felt like it’d stepped up in the same way as these, or even its own predecessors, despite still being delightful to play.

However, that changed when World 4-3 rolled around. Beep Block Skyway was as perfect as it was simple, and the music made it so. That is to say, the music literally made it – without its beat, tempo, rhythm and flow, the experience would have amounted to nothing.

On paper, Beep Block Skyway was a level that hinged on a very rudimentary idea: there were two sets of platforms – blue and red – and only one colour was traversable at any one time. This swap happened like clockwork every four seconds (every two bars) of the song.

It meant that the entire level was set at a solid 120bpm. Four beats were dedicated to music, while every other four were overlaid with a three-beep countdown and a further POW!-like sound that signalled the platforms’ immediate disappearance or reappearance.

Now, the thing was, Beep Block Skyway as a level really wasn’t that difficult; it was just a case of timing, but it never pushed you to the limit. Enemies, in the form of Boomerang Bros, were relatively infrequent and more of a passing annoyance than anything else. The emphasis was on the design – taking beep blocks from previous outings of the franchise and finally giving them deserving prominence as the core of a full stage.

But it didn’t matter because the experience was just so enjoyable. And at its very core, the song Beep Block Skyway built the level – something that’s annoyingly rare in platform games, where the level is designed first and foremost, with music laid on top afterwards.

What a stage/song combo it was – but only with the beeps. True to its beat-based nature, it’s 1:20 long, but it encompassed so much. There’s the stellar, repetitive synth backbone to match the space setting; the excited yet straightforward string section to give it an additional level of gravitas; that sexy bass/guitar combo which gave it a more relaxed vibe.

Considering one in every two beats had an overlaid sound effect, you’d think it’d get annoying, but it didn’t. The percussion, a usually dominant means of keeping your pace high or low, took a real backseat to the point where you barely noticed the somewhat pathetic, muted snare effect unless you listened closely.

But why need percussion? The beeps made the song as much as it made the level, and you only need to listen to the version on the official soundtrack to understand why.

Without the framework of the game for company, you might think that the beepless Beep Block Skyway could be the kind of tune that finally puts that long-forgotten spring in your step on the walk to the boring and shit place you probably work, but… no. Perhaps if you heard this version first, you might be impressed by it, but… no. It’s positively anaemic.

It’s exactly like the difference between Carnival Zone Act 1 and Act 2 in Sonic the Hedgehog 3: a core element of the song has been stripped out to leave a somewhat gaping hole in an otherwise-familiar experience. Yet the stripped-back Carnival Night Zone Act 2 had purpose in its setting; most of the lighting and power in the level had been knocked out, half of the world had been powered down, and the song lost its power too. It was a masterful touch by Sega.

Contrarily, the simple removal of the beep and crunch sound effects in Beep Block Skyway turns it into muzak; perfectly pleasant, but still so utterly lacking. This OST version of the song does have a leg-up on the in-game song by letting the bassist go a little wilder, though it wasn’t reflective of the Beep Block Skyway experience.

Then again, neither was hardcore pornography.

It all began when I was looking through comments (from who I assumed to be fellow fans) while halfway through the 30-minute-long YouTube video dedicated to the song, courtesy of the indispensable BrawlBRSTMs3 X: a YT user that deserves every one of their 461,000+ subscribers because of utterly faultless VGM publishing.

Soon, something seemed a bit off… what was this “Minus 8” everyone was alluding to? Why were people giggling like schoolboys about Beep Block Skyway’s use elsewhere? Some of the comments were outright cryptic. “Peach. Rosalina. Daisy. Samus. Shantae. Fun,” said top commenter and all-round pillar of the community Squig Rattlehead, who’s uploaded at least one video of a My Little Pony character surgically disembowelling another.

“Super Wii Scene Selector” – which I refuse to link to on principle – isn’t an emulator, nor is it a video reel of the console’s high points. You get to choose between various Wii characters, including Wii Fit Trainer, a couple of miscellaneous Pokémon NPCs and an utterly creepy grown-up version of the usually preteen Midna from Twilight Princess, who… well, there are a lot of poses involved, and these change every time Beep Block Skyway’s beeps kick in.

But don’t for a second think I don’t know you’re opening Incognito Mode on your browser now. That’s if you’ve even made it this far.

Beep Block Skyway is the defining song of Super Mario 3D World – something that pushed the innovation of the game itself while retaining its simple charm. It’s just a shame that hornier members of society had the same idea.