Dark Blue Monkey explains how the solitary track from Archipelagos was the perfect accompaniment to a surprisingly horrific game – and still sets the bar for VGM today.

I‘m going to go out on a limb here and say that there are few games as creepy as the largely forgotten game Archipelagos. I believe the secret to its creepiness is its music, and I want to spend a little time talking about it, because I think there are some lessons that modern game composers could learn from it. It’s one of those pieces of music that, when you sit back and think about it, really made the game what it was. 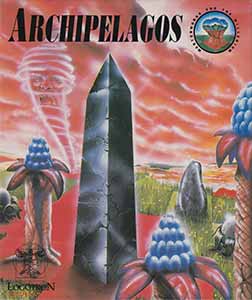 The game’s old, so only had one piece of music for 90% of the time, and the track was over five minutes long! It reset every time you started a new archipelago, so it could take quite a few levels to get into the third minute and beyond. It served as intro as well as the main game’s theme, and it set a highly disturbing tone right from the get go. It was composed by the one and only David Whittaker, whose game discography is extremely distinguished, and anyone who’s played one of the hundreds of games he’s scored will recognise his brilliant style.

So, to set the scene, the game itself was set on a series of desolate islands. There’s just you and the long-lost remnants of an alien invasion which destroyed all human life; the infectious blood of the victims was seeping up through the ground, infecting the carnivorous trees and, of course, the life-sucking vampiric souls of the damned looking for revenge. Pleasant, eh?

My friend Ben and I (aged 15, camped out in his bedroom for a sleepover and gaming sesh) turned off the lights, inserted the disk we borrowed from our friend Dave, and turned on his Atari ST. We were met with the horrid red bloody landscape of the splash screen: a world of horrors we were about to willingly step into. Worse still, the creepy music began, sending shivers down both our spines. We looked each other nervously and pressed the spacebar to begin.

It began with a curious, almost whimsical, lead in, quietly hinting at strange things ahead. The first few archipelagos were creepy, sure, but they passed by quickly with no incident. Then, the music suddenly turned from curious to slightly off-putting, turning on the width of a minim into something that wouldn’t be out of place in a Friday the 13th movie. 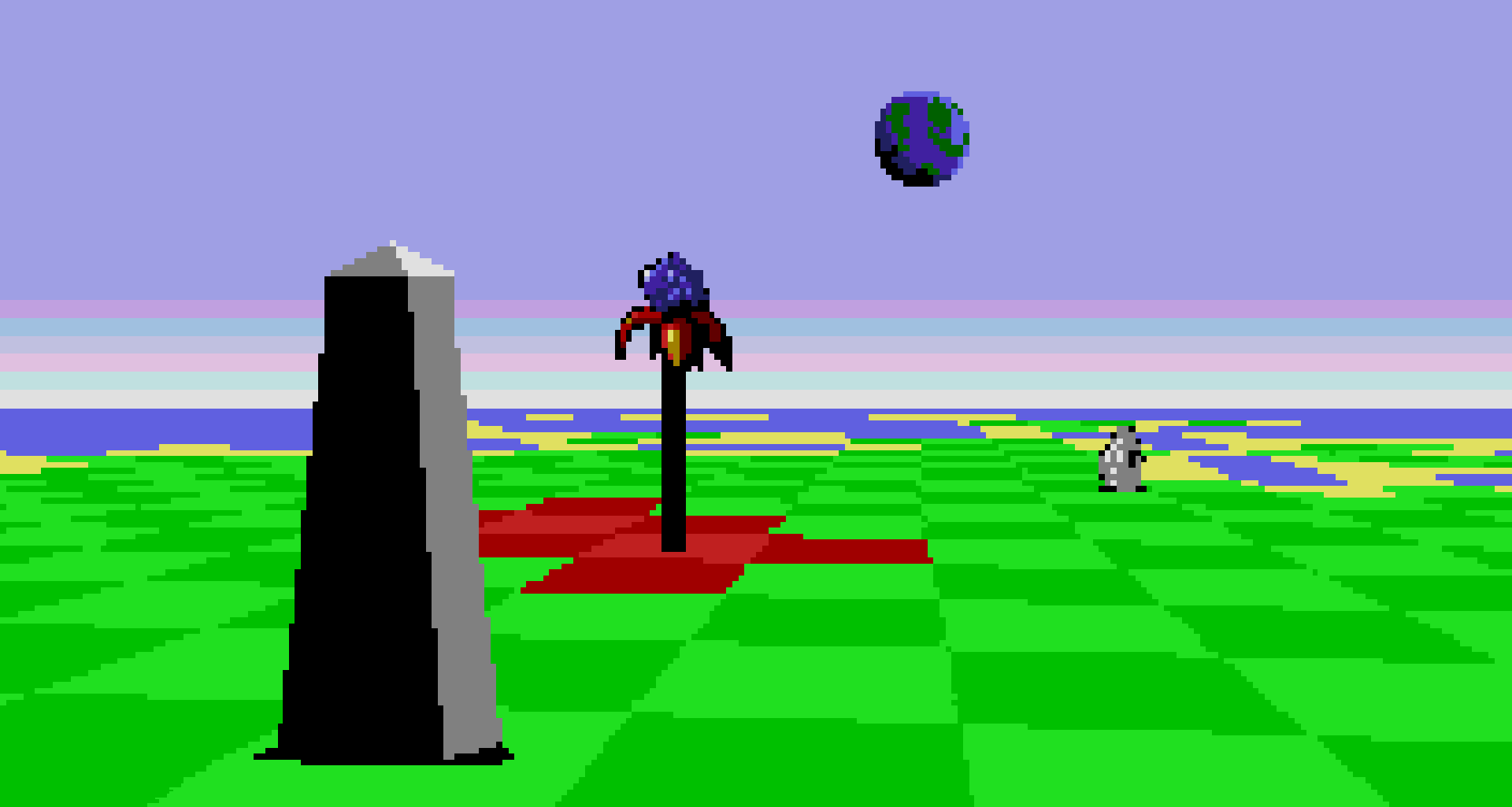 Soon we were nervously standing on a new, windswept green island. An obelisk rose from the ground, the music continued to twist and turn, never allowing you to get the ‘flavour’ of the tune. It seemed for a moment like it was going to be a fun adaptation of Jean-Michel Jarre, but suddenly yanked the melody away into a very off-key wail, more strained and ethereal. It was suddenly haunting, eerie, slow and then stopped dead. Next it began again, changing to something even stranger, with bits that sounded like Xenon, then Wizball then the soundtrack to Monkey Magic, of all things… It leaped about styles, genres and tempo, sometimes on-key, then suddenly off. You were never given the time to get used to it.

The usual red tree with poisonous-looking berries had appeared nearby, dripping with blood, spiralling downwards like a child’s toy, burrowing into the ground. This time, however, it wasn’t alone! We moved away quickly; the things we’d seen had warned us that playtime was over, and it was time to get serious. We wandered over the huge island, and then music went quiet… we’d reached a section of it we’d not encountered before. It sounded forlorn, tired, a little like the first few sounds in Powermonger, a gentle ‘crunchy’ beat that only the Yamaha chips could do so well. I wondered where it was going, but no, it switched course again, going off into something from an alien movie. 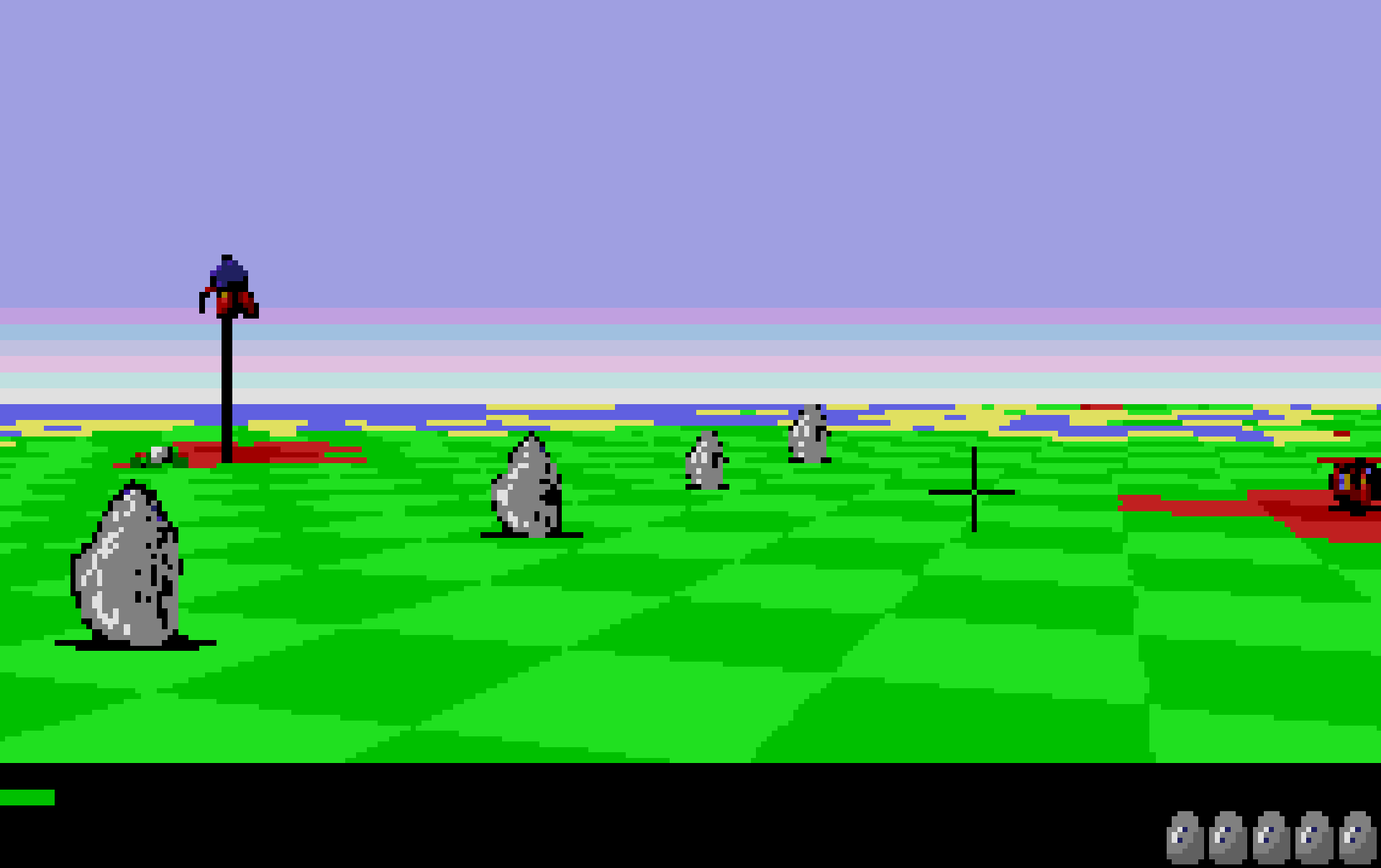 We watched the tree spiral into the ground spewing infected blood. Then silence… the blood stopped… was that it? Just then, the land right next to us began to seep red and three trees burst forth. The music blared suddenly, the tone rising in discrete notes while a little playful melody played away behind them like a horror movie. We ran, but the tide of red and the trees followed us, all the while being taunted by the ironic minor chords of the music…

Soon, options for escape started to dwindle, the blood was seeping everywhere and all the islands were coated in the angry red stain. The discordant disharmony was clearly taunting us now, a counterpoint to our efforts. The trees were converging from all sides for the kill and we were starting to panic, shouting at each other which way to go. The music slid languidly from its urgent cacophonous rise into a far darker more deadly tone, mimicking the chase of a protagonist in a movie.

That’s when we spotted the lost soul – a small angry whirlwind wailing in torment; we’d lingered too long, it had smelled our soul and was looking to feed! To add to the misery, a blood tree had just burrowed up behind it, enlarging the tide of red, cutting off our retreat. How did it get so close? The music was reaching crescendo; nothing it did made sense with its rapid switching and improper use of that little trio of notes used to indicate something out of place and curious, the so-called “devil’s interval”. We backed away a few feet, to the edge of the island, the blood seeped closer. We span around to see a floating eyeball cutting off our only escape! What fresh hell was that?

The lost soul was close, its harrowing wail getting louder, mixing with the music, which was just being plain weird, leaping about again, suddenly being more percussive for a few bars. The blood plant burrowed into the ground scant feet away and we searched about frantically for a patch of green, anywhere to escape to, even trying to raise some land from the ocean. We were frantic, yanking the mouse off each other! 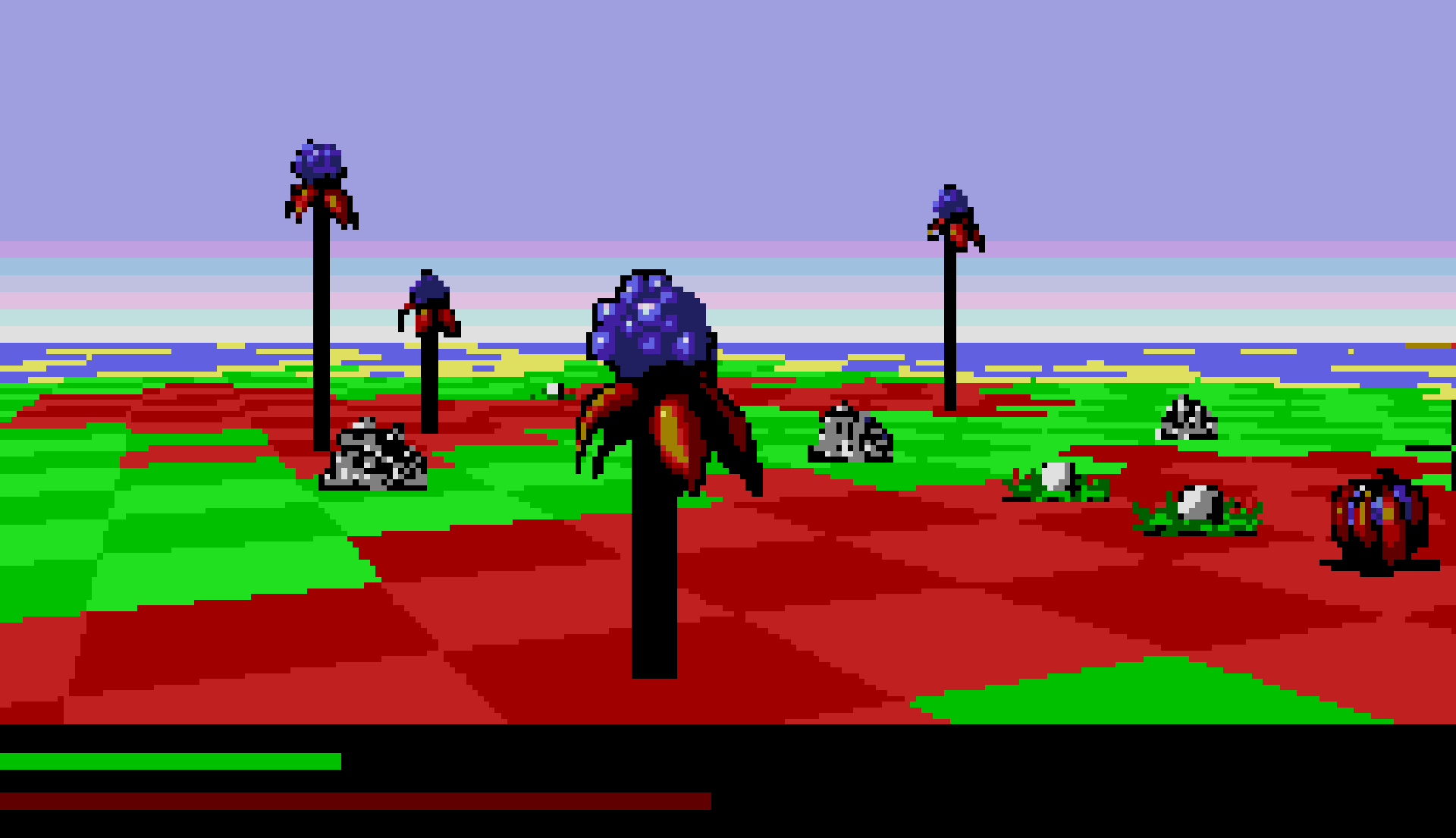 The blood advanced another square, the music suddenly took an urgent turn, and the game was closing in! It knew we were doomed.  The oozing infection was inches from us with nowhere left to go. The eyeball drifted closer… the music seemed to be saying “give up, this land is cursed, you’re doomed to fail!” The tree had vanished, it was seconds before it would burrow up beneath us! We looked for one last place to run. 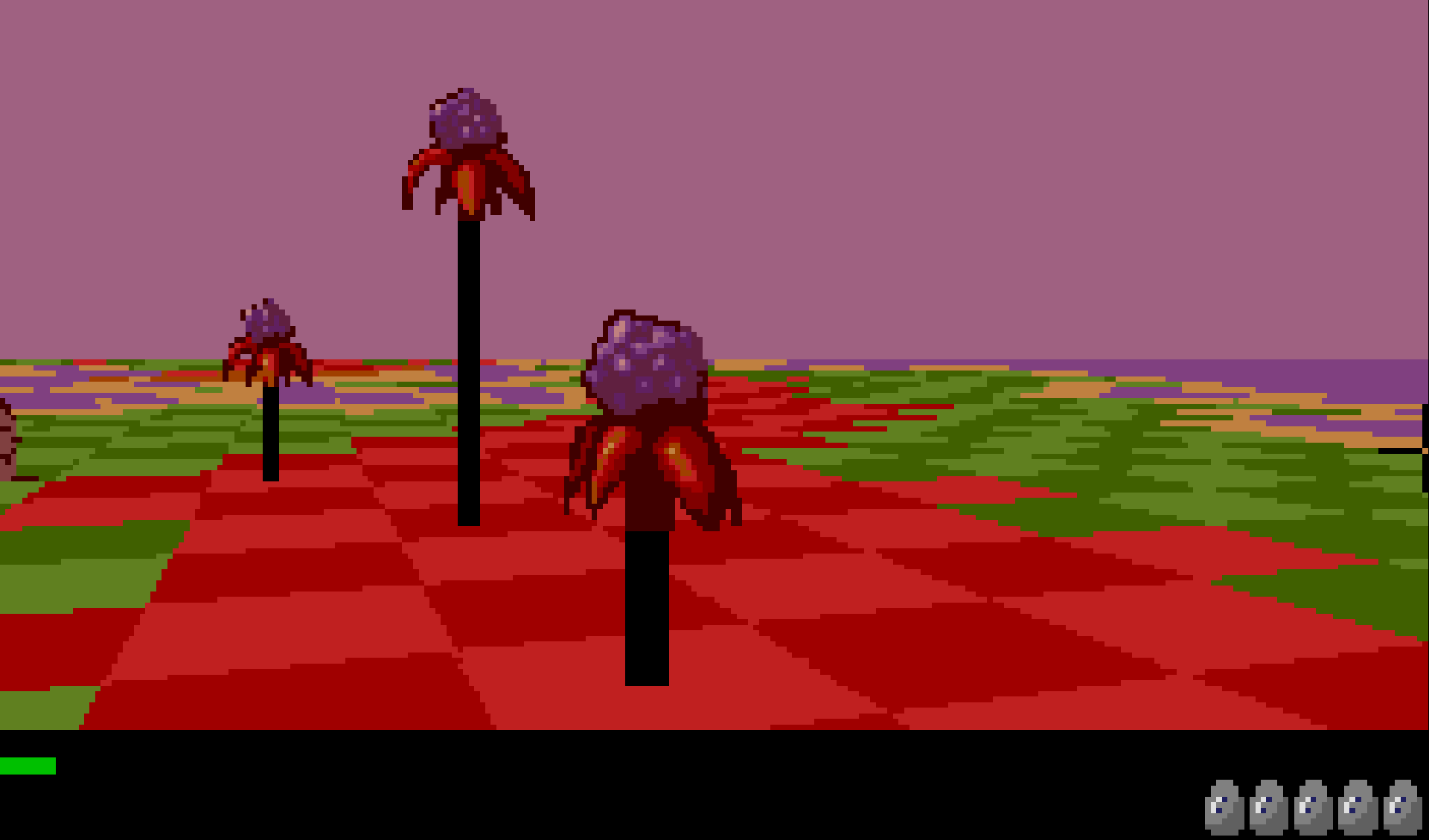 The main thing about Archipelagos’ music is that it used every trick in the book to keep you guessing from one moment to the next. There were pauses, little curious trills, rising expectant bars, followed by weird modern electronic noises. But then it used the biggest trick it had: it went completely normal for a moment. You were allowed to rest, to think “ah, the creepy bit is over”, but that got yanked away from you mid-bar

The suddenness and musical illogic of this switch from normality to off-key wailing was even worse, and just put you more on edge. I think it can teach composers for modern games about how you can use the structure of the music itself to set tone, as well as the composition. It also proves that it’s okay to experiment, and to try different themes and keys. Whatever you can change from one moment to the next, do it, because if you can make the player on edge through the music, the game will be far creepier.

Thanks to its unique music, playing Archipelagos still spooks the bejesus out of me long after the first time we loaded it up. I can only play it for so long before my heart is hammering. I didn’t mention it above, but when you’re close to winning, the “get to the finish” music is genius as well. It mixes that feeling of success (“yay, nearly there!”) with immediate urgency (“you’re almost surrounded and cut off, run!”).   Even in victory, you’re still not allowed to relax.

To be honest, I prefer the ST version’s music. The YM chip’s reproduction was far more angry and disharmonious. The Amiga’s sound chip lent the music softer and less harshly discordant quality to my ears. I recommend you play the game, or if you don’t have the time, just listen to the music on YouTube. I guarantee you’ll find your skin start to itch, and you’ll feel uncomfortable. Such is the genius of David Whittaker, who I believe made the game what it is.

When a game and its music go so well together, it creates an experience that stays with you forever. It turned a quirky game into one with the feeling of survival horror, in the days before the genre even existed.