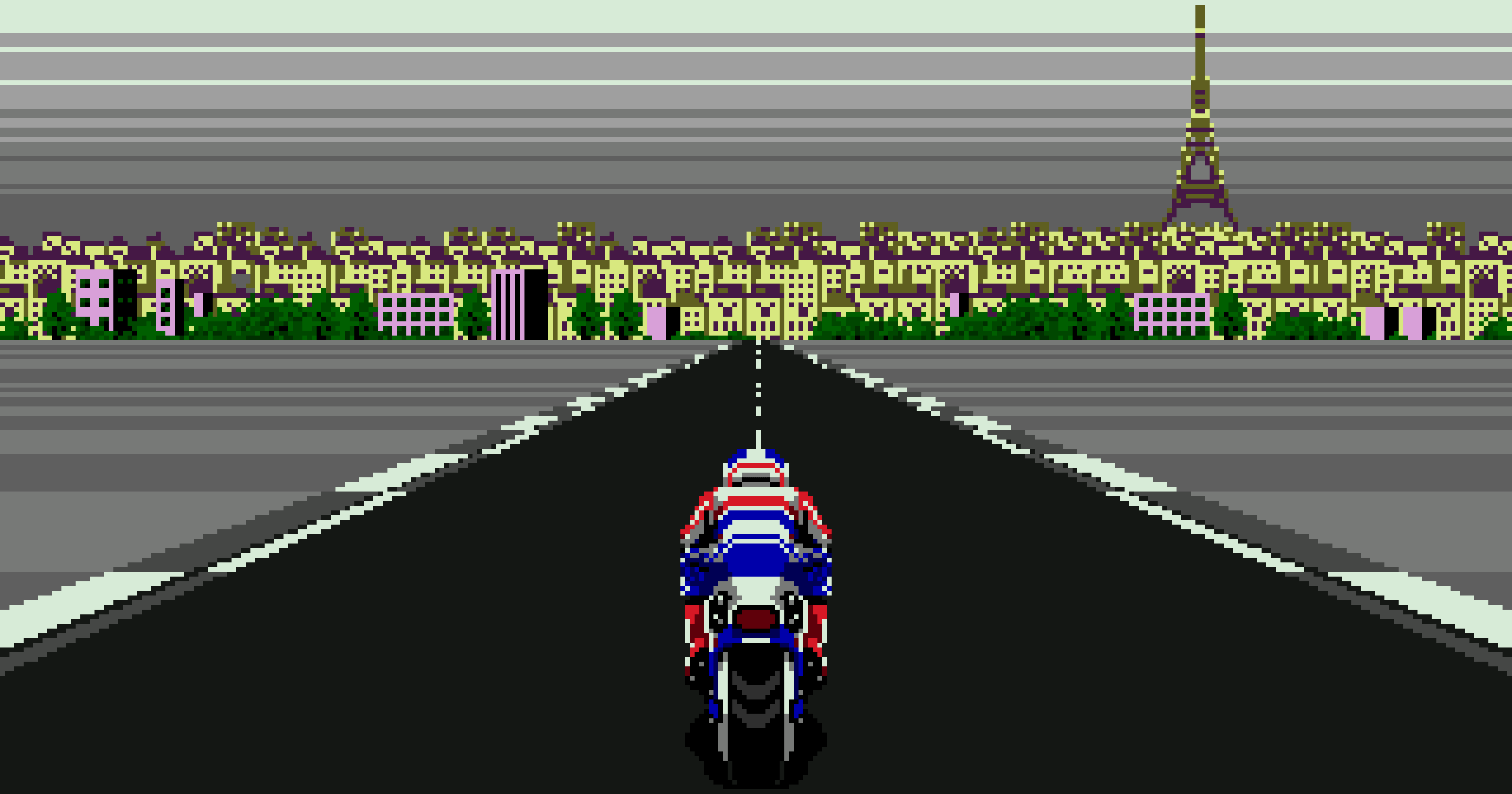 By Matt Gardner August 2019 No Comments

Like OutRun, Super Hang-On was well-remembered for its in-race music. For Matt Gardner, the existential dread of entering a password on the game’s Mega Drive outing turned one cute song into something that’s haunted him ever since.

Ten repetitive seconds of hell. That’s all I remember about Super Hang-On, because of that bastard Password song. I have vague recollections of its opening Africa levels; I remember the red, blue and white bike; and, of course, the repetitive brown and green opponents left a lasting impression.

But all these memories pale in comparison to the repetitive nonsense inflicted by a song which, for all intents and purposes, was meant to be a short and sweet affair. Not for me.

I got Super Hang-On alongside the Mega Drive on a Christmas Day in the mid-90s, as part of the then-actually-mega Mega Games I, which bundled the racer with World Cup Italia ’90 and Columns. The former was a surprising hit with me, despite the fact you could only score at an angle, or from corners; Columns ended up being my dad’s favourite game of all time.

But my two older brothers… well, they LOVED Super Hang-On. In the rare times they were together in summer, and long before I managed to get hold of Brian Lara Cricket ’96, they found a common addiction to the motorbike game and I went along with it. Together, we quickly got bored of its arcade mode – a largely tedious, unfulfilling affair in our eyes – but as a team, we had a lot of fun took on the career-style “original mode”. 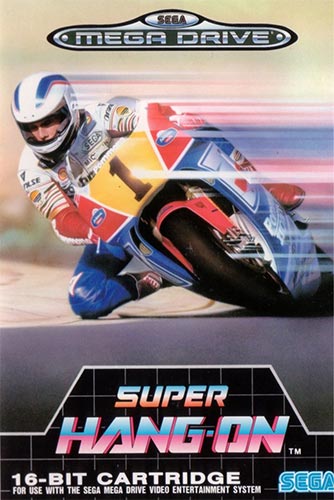 That was, of course, until they went back to work and university respectively.

As often as possible during our playthrough – when we finished a stage, upgraded our bike or got a new mechanic – we feverishly wrote down passwords to pick up where we left off. This being a super-early Mega Drive game, there were no save states; it was all about the long, 28-symbol code to jump back in where we left off.

It was exhausting, but it was the only real way to guarantee a jumping-in point for all possible bike spec and race combinations. The difference between the bottom and top specs of the bike was insane too, not least in the frame and engine departments. You started with what felt like a lead body and a lawnmower engine but, for the eventual princely sum of $16 million, you’d get the top-spec parts (but not before buying plenty of in-betweens along the way).

Money was regularly spent fixing a bike (which literally wouldn’t leave the starting line if you didn’t), draining precious race winnings if we crashed a few times along the way. Because of this drawn-out affair, we never got to complete Super Hang-On but god, did we get close. Well, I say “we”. My brothers did every single bit of the heavy lifting, across long late-summer afternoons and occasional Sunday late-evening spells. I sat back, behind them, in quiet awe.

Eventually, they ran out of time. One went back to London to work; the other went back to East Yorkshire to study. They gave me their scribbled passwords as recompense, which felt good – I’d been handed the baton.

Entering the passwords, however, was another matter.

There was a massive, ridiculous issue with Sega’s password planning. It decided, in its infinite wisdom, that it would use the full keyboard – including numbers – to generate its codes. It also applied a weird, nonsensical colour scheme to it. Only years later did I realise why.

Blown up in huge, pixel-perfect HD, it’s easy to see the difference between zero and the letter O – but even then, there’s only two pixels in it, making the zero symmetrical and slimming down the right-hand side of the capital letter. Sega purposefully put them in green and red respectively for a reason, much as they did 1 (green) and capital I (yellow). 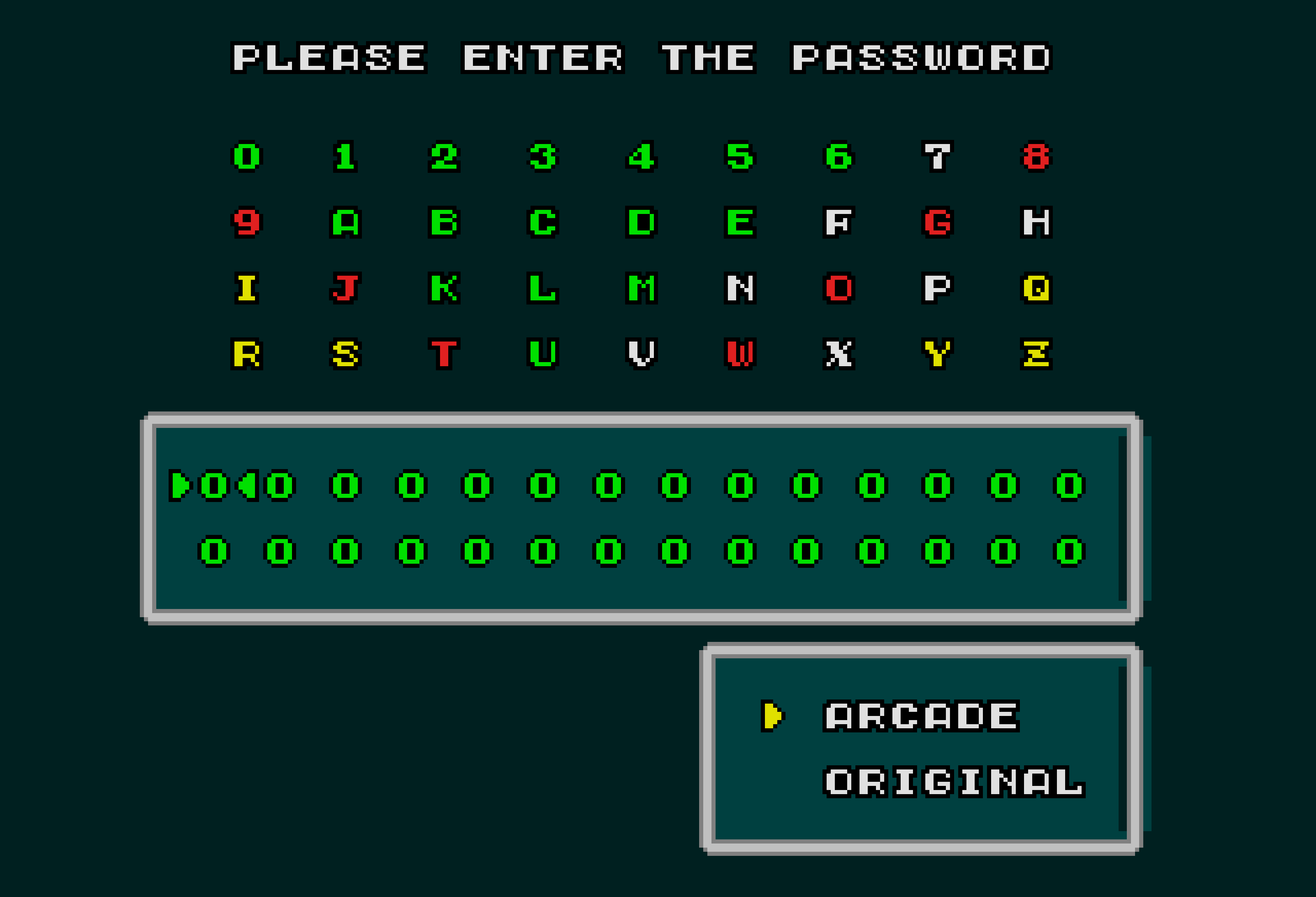 Yet in my brothers’ minds, Super Hang On’s O-shaped password symbols were all the same one; no colour or difference was considered. And so, through trial and ALWAYS error, I discovered that I couldn’t get to their highest level; the old passwords, seen as surplus to requirement, had been binned as soon as they wrote a new one. My mum, ever the efficient housewife, ensured bins were emptied on a regular basis.

So, over minutes and, on two occasions, full hours, I had to listen to the same ten-second Password ditty on repeat. It was cute at first. Now, it’s tattooed on my brain. You’ll soon understand why:

It haunted me to such an extent that now, Password is always there, in the back of my head, waiting to return. It’s just ready to play on low volume, taunting my very soul, assuming I have one. When I’m frustrated when writing, or lost on my way to a specific place, or trying to remember something that I’m SO CLOSE to recollecting, the Super Hang-On Password song is fucking playing in my head.

I’ve never been able to stop it, but it’s effectively become a musical version of Stockholm syndrome. I’ve learned to love it and, if anything, it’s the perfect motivation to get the answers I’m looking for, whether it be the right phrase, direction or memory.

One true positive that arose from Super Hang-On, however, is that I’ve always written my zeroes with a line through them ever since: ∅. Eleven-year-old me ensured I’d never make the same mistake as my brothers once did.

I later learned that, much like Metroid, the game’s ending did the whole “oh my god, it was a woman the whole time!” reveal, which was genuinely cool. Even better was the fact a fangirl went up to the winning rider assuming it was a bloke; the triumphing cyclist raised their helmet to reveal they were also female, before seemingly flicking a very British reverse V-sign at the adoring fan, making her storm off in disgust.

And so, I never completed Super Hang-On. Even now, instead of succeeding, I’m usually too busy spending half my races in mid-air, suffering one of many clearly lethal crashes but just managing to survive each race – but dying inside after failing to progress yet again.

Certain stupid songs, rhythms or even beats stick in your head for years and years, but rarely does one really bury into your very brain like Super Hang-On’s Password. Weirdly, after all these years, it doesn’t feel so bad – even if I’ve forgotten 99% of the game since. Then again, to be absolutely fair, Super Hang-On was mostly shite, so at least it had one oddly redeeming feature.