By Luke Marshall July 2021 No Comments

For Luke Marshall, NHL 97 was so good, he owned it twice – and in 2021, it helped him rediscover old friendships in more ways than one.

When I was a kid, I had a bit of an obsessive personality. I didn’t just get into the latest craze; I threw myself in headfirst. Whether it was Biker Mice from Mars, Bucky O’Hare, Pogs or Pokémon, I collected the stickers, the trading cards, the action figures… I was all in. My youth was spent creating my own imaginary worlds with my own rules. When it came to video games, I was no different – especially when games had an editing feature.

This is a story about NHL 97: one such obsession that I’ve returned to over the years. To me, the game is just like opening a time capsule. It not only captured a unique time but also a group of friends, forever trapped inside a 16-bit cartridge.

Like many people brought up in the UK during the 90s, my introduction to ice hockey came through Disney film The Mighty Ducks and its various sequels and cartoon spin-off. I’ve always been a sucker for a good underdog story, and its overall message of team spirit over skill really hit home with me, as I was never a particularly talented sportsman.

There was only one other kid in my class who shared my newfound love for ice hockey. He invited me round to his house to check out his latest acquisition: a Sega Saturn. He was the first in our class to own the console, which made him popular at the time, and it was through him that I was first introduced to NHL 97.

It was my first experience with a full 3D console and I was utterly bewildered by the graphics, the actual audio commentary, as well as the real, photographic headshots of each player taking to the ice during the cinematic build-up. 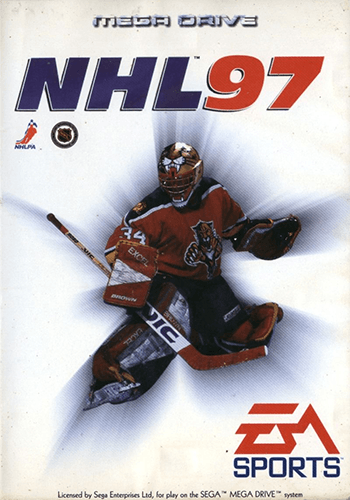 I loved the game so much that I owned two copies: one for the Mega Drive and another for the Saturn, when I finally acquired the console myself. Despite all the fancy 3D graphics, I always preferred the simplicity and gameplay of the 16-bit version. 3D gaming was still in its infancy, yet 16-bit hockey was tried, tested, and honed to perfection. While the Saturn version promised so much, it was the Mega Drive that delivered.

The game was super easy to pick up and play, especially with the Mega Drive version only having three buttons (plus the start button for special moves). Where MD NHL 97 lacked the latest 3D graphics and the commentary track, it made up for it with great, 16-bit pixel artwork. Each team crest was represented and looked amazing, something even the likes of the FIFA series lacked at the time.

Two of my favourite aspects of the game highlighted my cruel streak; when the other team scored, they would all huddle around to celebrate, but during this animation you could resume control of your players and just ram into them repeatedly, sending them flailing across the ice. The other was body-checking someone into the boards next to the player’s bench; they would go straight over the barrier into all their teammates, resulting in the ultimate humiliation. 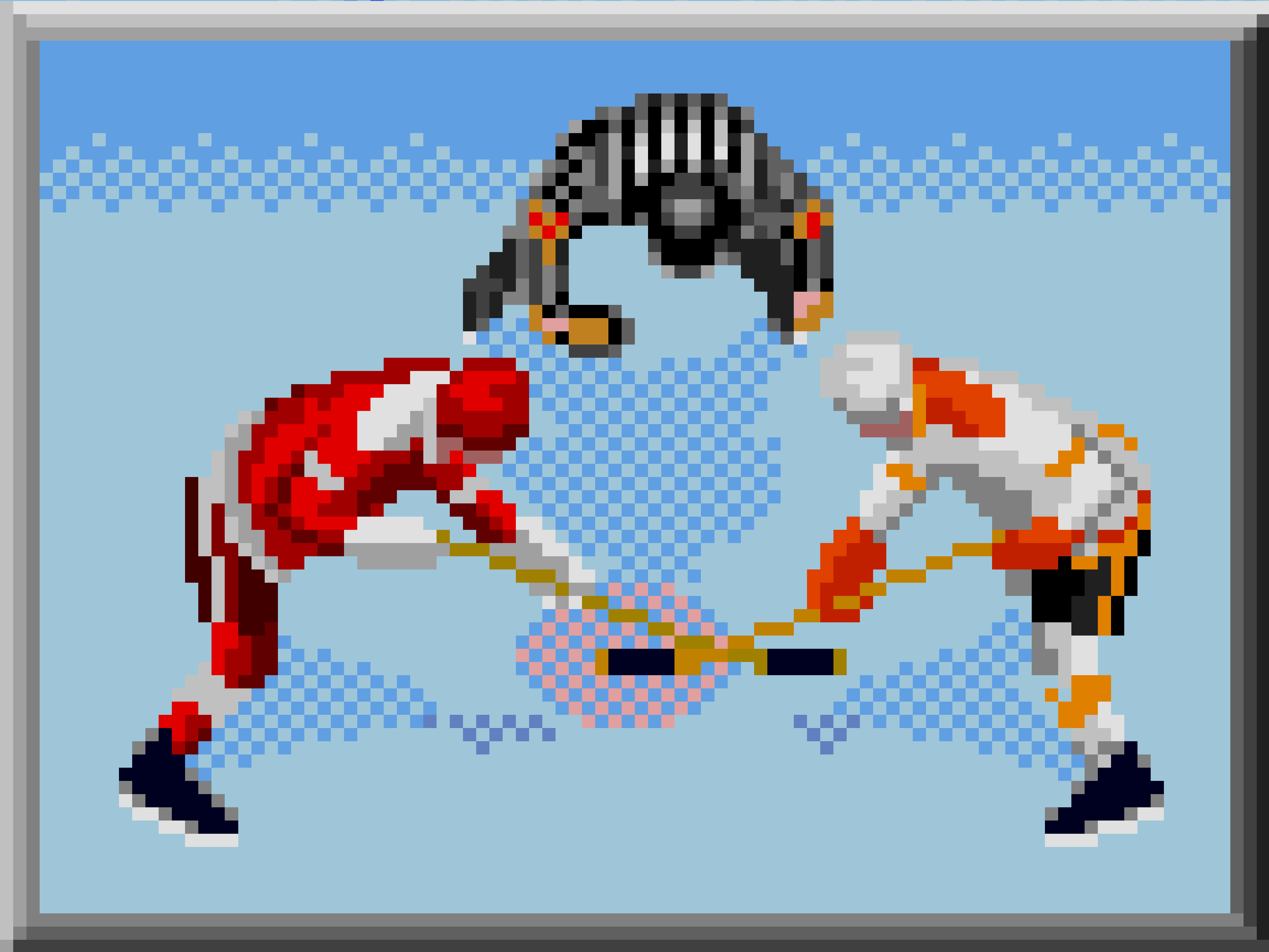 The fact that the sport of ice hockey included fighting only added to the appeal. I was a huge Street Fighter and Mortal Kombat fan, so adding a beat-‘em-up element to a sports game, however basic, seemed like a perfect fit for me.

However, the real strength of NHL 97 came with the in-game editor, which allowed you to create your own players and even add yourself to the roster.

Most in-game editors back in the late 90s were incredibly limited, meaning you could edit a name and jersey number, and that was about it. However, NHL 97 also had a stats editor so you could give your player unique strengths and weaknesses to separate them from the pack. That was all I needed as a kid; I had the ability to see my own name on the screen, and my imagination would take care of the rest. 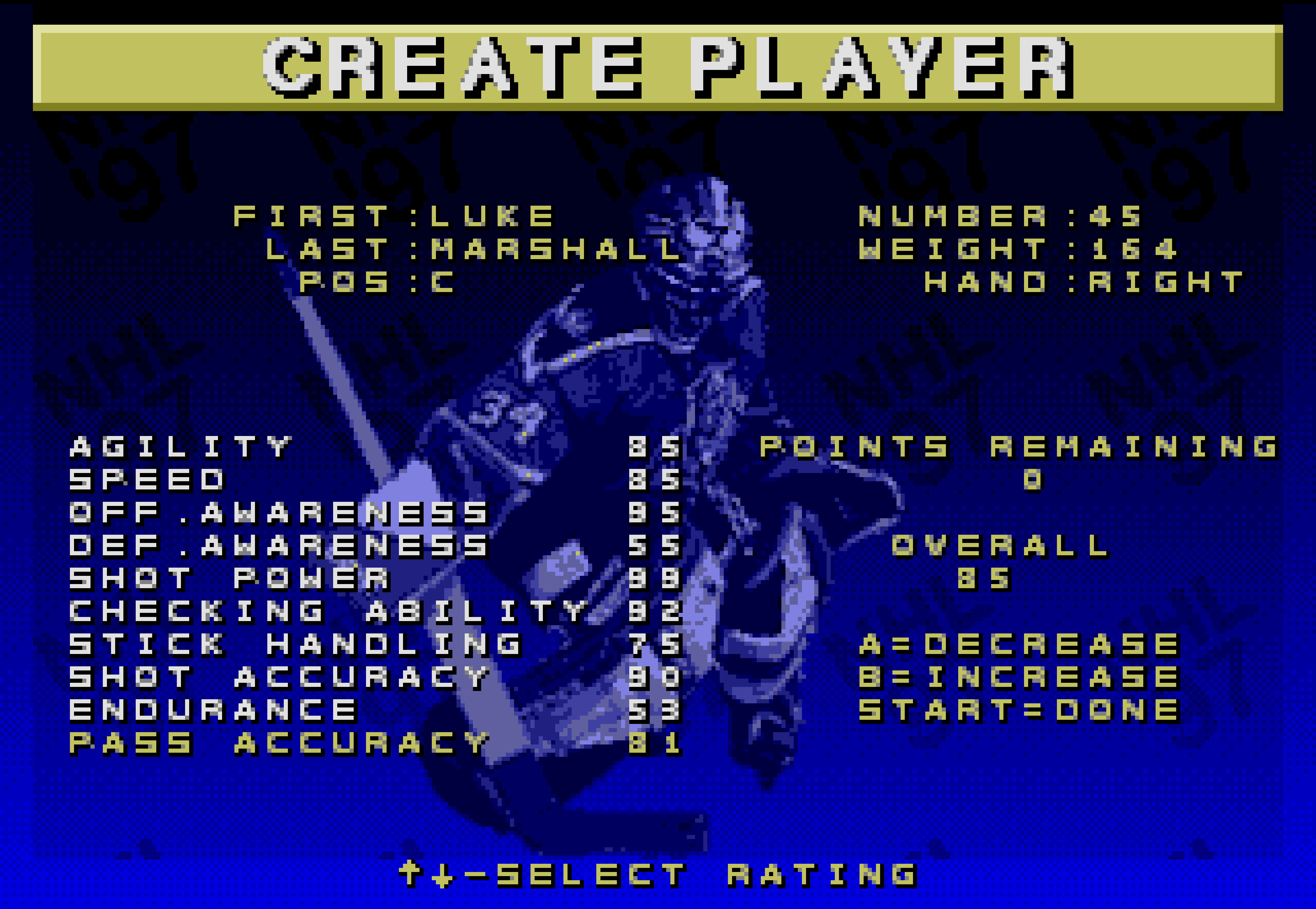 One day I decided to edit all my school friends onto the game, playing at different teams across the league to add an extra rivalry to each fixture – and, of course, I turned their temperament up to full so we could beat the hell out of each other and every given opportunity.

I signed myself up to the Vancouver Canucks playing at centre, and went on to win the playoffs before moving on to do the same with the Dallas Stars while playing alongside my hockey hero, Mike Modano. The game had extensive leaderboards for scores, assists, and penalty minutes, meaning I could keep tabs of all of my mates and strive for MVP. I finished the season as top scorer, but I also led the charts for most penalty minutes for fighting – something I’m still proud of to this day.

I loved NHL 97 so much that I stuck with it and didn’t bother upgrading to the next instalment; I found myself going back to it periodically for years on end. My knowledge of the sport pretty much started and still ends with NHL 97, and to this day I can still reel off a list of players from memory, based solely on that game. To the educated hockey fan reading this, that fact probably stands out, given any other hockey terminology is most likely a million miles off.

Fast forward 20 years; I’m now on the wrong side of 30. I’m also married. One of the many things my wife dislikes about me is the fact that I will literally talk to anyone. While halfway across the world, sat at a bar in Mexico sipping on a piña colada, I struck up a conversation with a middle-aged couple from Canada. It turns out they were from Vancouver and fans of the Canucks, so off I went chatting about the 90s team and it all came flooding back… Pavel Bure, Alexander Mogilny, Kirk McLean, et al. The Canadian husband was surprised at my knowledge and asked me how I knew so much about such a specific time…

It came straight out of my mouth without a moment’s hesitation as deadpan and honest as if someone asked what I had for breakfast. There was a moment of silence, and it was only when I noticed the look of complete confusion on his face that it clicked, and I finally followed up the sentence:

He laughed and said I looked a little too young and skinny to be playing professional ice hockey back then. Sometimes, I forget that my video game experiences are not real life.

But, in a way I did play for the Canucks, albeit on pixelated ice. 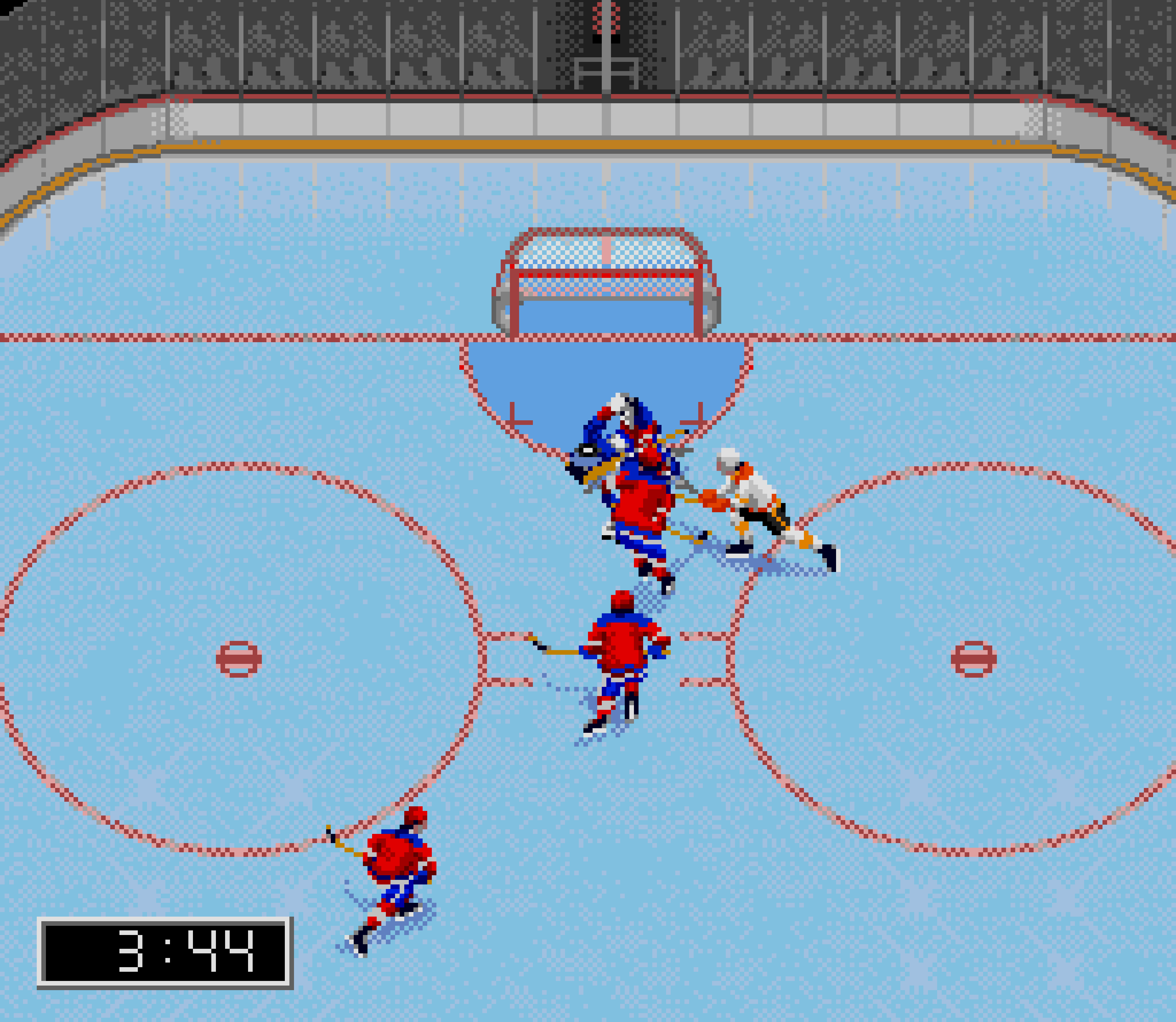 We all have our own unique gaming history; our childhood adventures spent in front of a console helped us escape to digital worlds and live out our dreams. Whether it’s lifting the Stanley Cup or saving the world, our childhood imagination placed us right there, lacing up our boots or wielding a sword, shoulder to shoulder with our heroes. It didn’t matter that the graphics were 16-bit, with only an editable name to work with; our youthful brains filled in the blanks. It’s funny how these experiences leave lasting memories and mean so much to us, but that’s the power of gaming.

Hit by a nostalgic wave, I recently dug out my Mega Drive and decided to delve back into the world of NHL 97. It still holds up to this day, and to my surprise, the game was exactly as I left it: halfway through an unfinished homecoming season with the Vancouver Canucks. All my old friends were still there, too, some of whom I haven’t seen for over 15 years.

So, I decided to finish what I started all those years ago. Each league game I played was like revisiting those friends one by one, especially as I threw my gloves on the floor and tried to beat them up.

Going back to NHL 97 and seeing the 16-bit incarnations of my old chums made me reach out to a few of them during the pandemic and national lockdown. It was great to reconnect with some of them during a time when loneliness and isolation hit even the best of us, and I owe that in part to video games.

Thanks for the memories, NHL 97; here’s to many more.

I love NHL 97 and I have so many happy memories that will forever tie me to it. While my personal story is tied to the game, it could have been any game in the series – it just so happened that 1997 was the year I discovered ice hockey.

While it’s generally considered to be a rather mediocre entry to the series among fans, it’s the only instalment I ever played. I’m sure that if you enjoyed mucking about on a player or character editor during the 16-bit era, you can get plenty of fun out of this fantastic EA game.