I’ve a confession to make: before Golden Axe came into my life, I thought multiplayer gaming was rubbish.

Though I’ve come to enjoy the pursuit far more in recent years, as a child, competitive multiplayer always left me wanting. It might have been the result of being endlessly beaten up by the smart arse who could trigger Reptile’s invisibility on Mortal Kombat II, or having to tolerate my way through communal Micro Machines, secretly wishing I was playing it on my own instead. Either way, playing with others never quite pushed the right buttons.

However, this would all change. Cast your minds back: it’s the beginning of the school holidays in 1996, I’d just had my ninth birthday, and a friend who lived over the road told me he had an awesome two-player fighter we should play. I know what you’re all thinking: “wait a minute: 1996. Why isn’t this about a Saturn or a PlayStation game?” I’m from North Wales. It’s alright, some of us even have Wi-Fi nowadays! Anyhow, I sigh, agree, and prepare as normal for a couple of hours of getting my virtual head kicked in, as per the norm.

How wrong I was. He introduced me to a cartridge that we would play together, almost unfailingly, every day of the holidays. It was to become, for me, the holy grail of Mega Drive carts: Mega Games 2. It included the highly-impressive ninja platformer Revenge of Shinobi: a game so hard, nobody I ever met managed to finish it, even with the widely-circulated infinite shurikens cheat. It was, however, the collection’s two other titles – edgy roaming beat ‘em up Streets of Rage and sword and sorcery hack ‘n’ slash Golden Axe – that would leave the biggest mark. 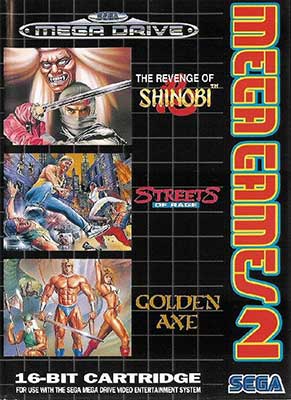 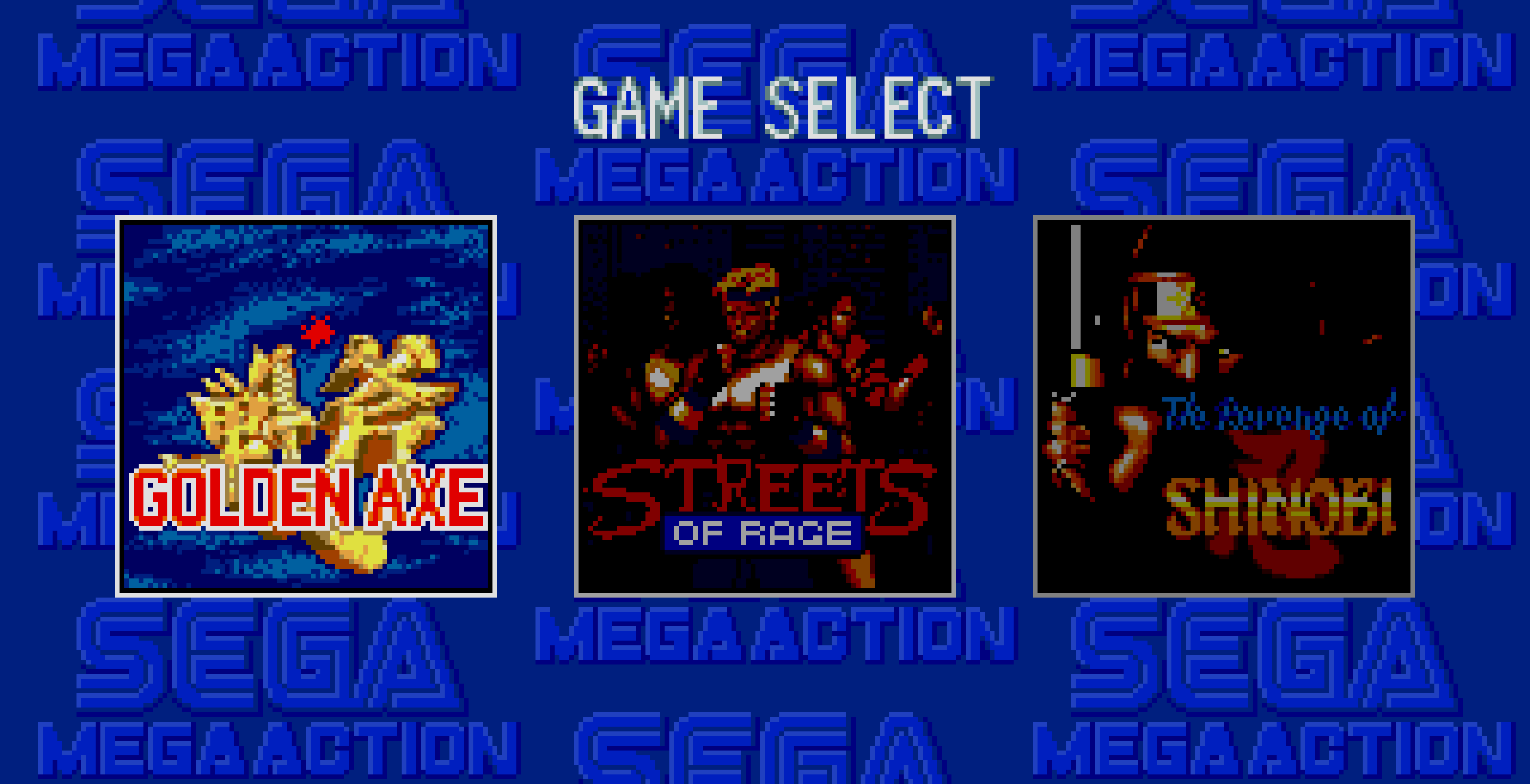 Huddling around a small (though in North Wales, utterly state-of-the-art), colour TV in my friend’s game-packed bedroom, my scepticism evaporated quicker than England’s chances at Euro ‘96. Right from the get-go, it was clear Golden Axe was special. The first thing that hit you were the ominous, rolling drums. They formed the precursor to an all-out, call-to-arms battle blare, as the game’s logo span onto the title screen. The effect was dizzying, dazzling. There was no time to marvel, though, as we were then invited to pick our combatants, seemingly from the palm of Death himself. It was clear with 15 seconds that Sega’s brawler was quite unlike anything else I’d experienced. 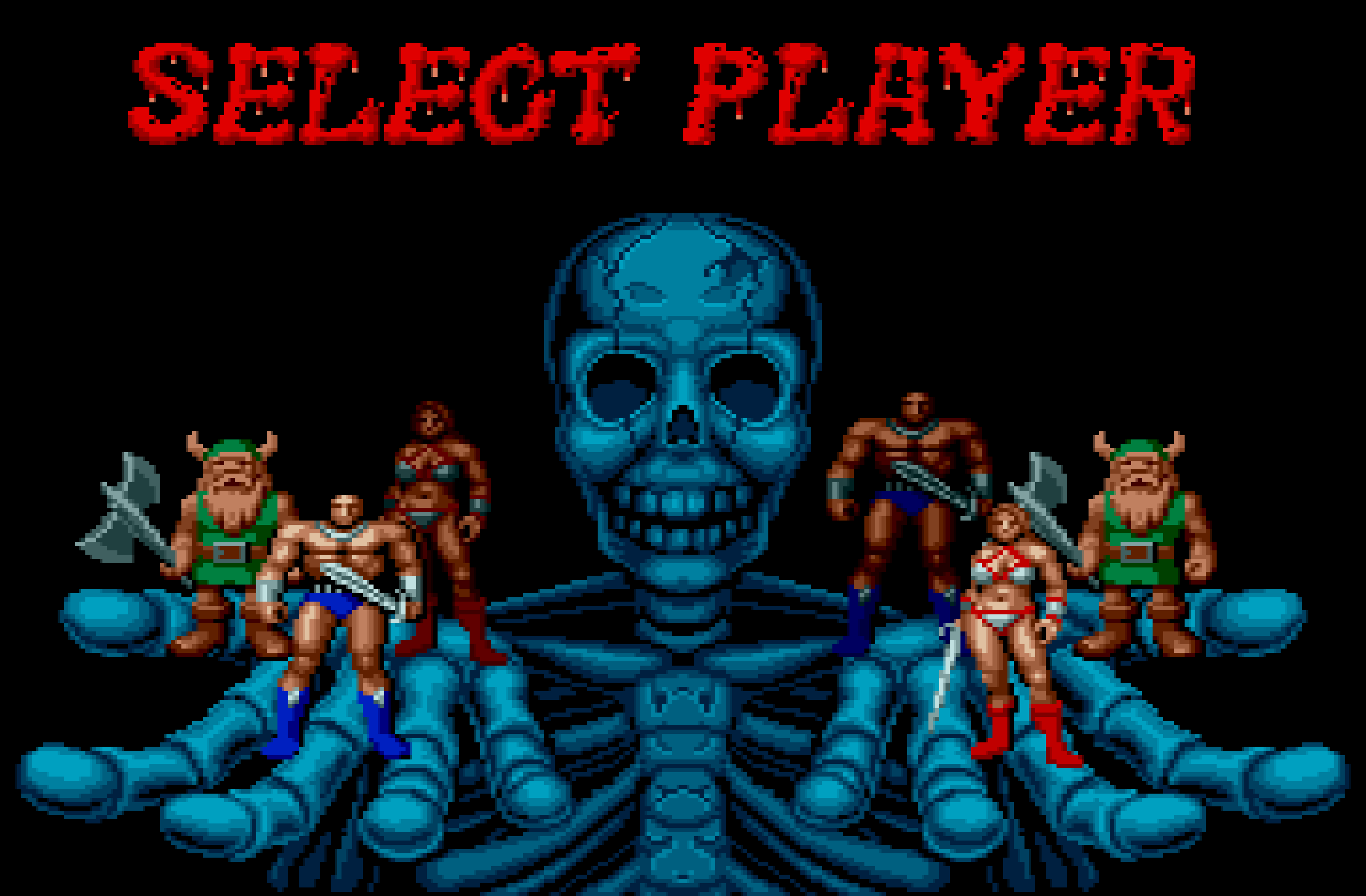 Set in the fantasy land of Yuria, the story told of evil overlord extraordinaire Death Adder, who had not only stolen the Golden Axe, but kidnapped the royal family for good measure. In an interview with retro GAMER magazine in 2014, creator Makota Uchida explained that he wanted to make “a Double Dragon that was not a Double Dragon”. In other words, a roaming beat ‘em up that broke away from the overly-familiar, urban modernity that was dominating the genre at the time. Inspired by Conan the Barbarian and The Lord of the Rings, Uchida’s aim was evidently to create the gaming equivalent of a sword ‘n’ sandal fantasy epic.

A premise that had ‘mild peril’ written all over it, for sure, though nothing wildly unusual so far. Yet unlike so many similar titles, Golden Axe really sold its vision, with remarkably extravagant design and action-packed, bombastic levels. How many games invited you to traverse a village situated on the back of an enormous turtle, or follow it by plonking you atop a giant (read gigantic) eagle?

Over a period of around six weeks, my friend and I would tackle one of Mega Games 2’s golden cooperative pairing, every day. Suddenly, there was no time for other games. We worked as a team, winning together, losing together, getting annoyed at sticky controls and cheap henchman charge attacks, together. When we weren’t playing, we were outside riding our bikes, using the exercise as a mobile tactics meeting, working out what we needed to do differently in order to progress. 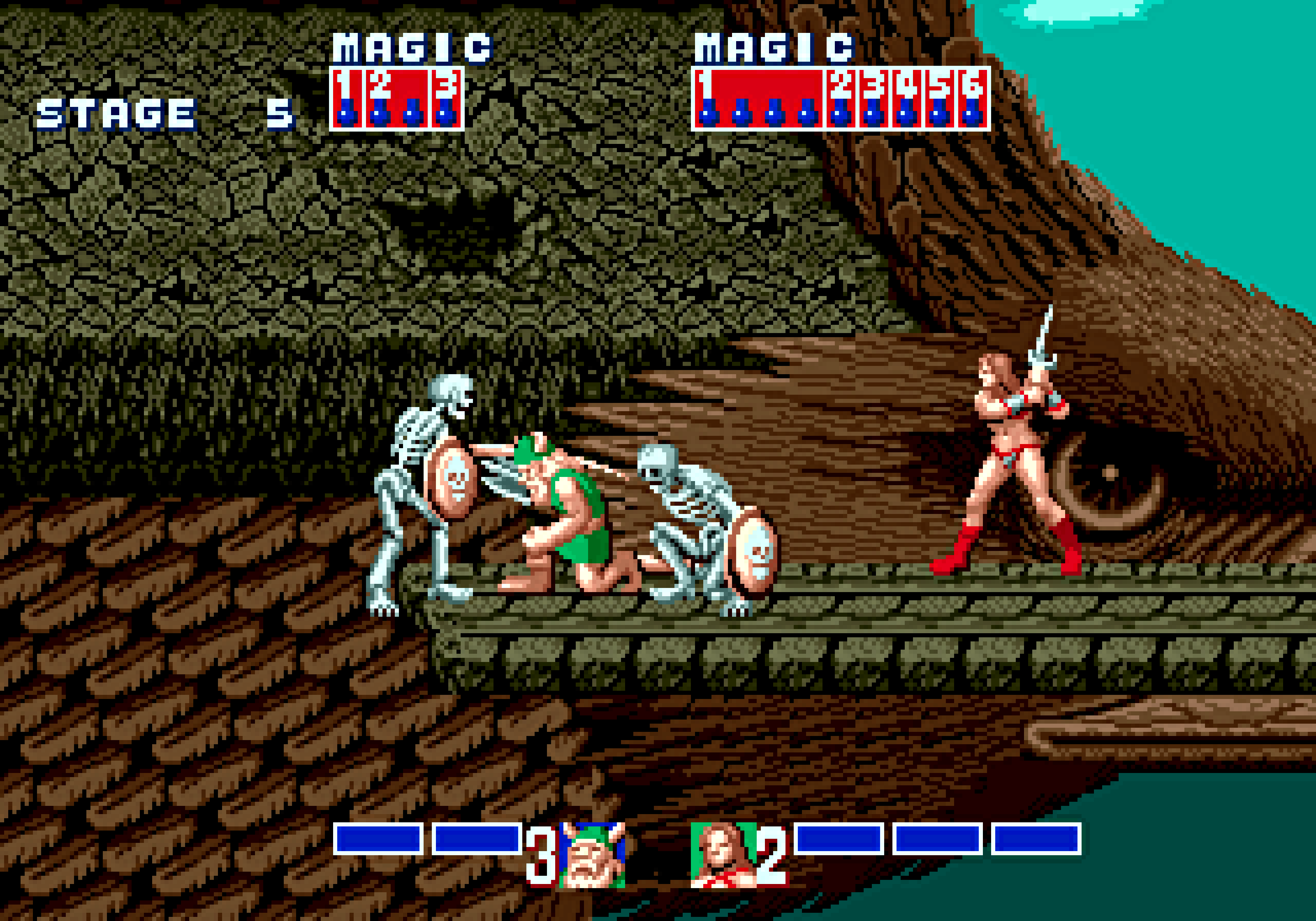 Side-by-side, we battled, day after day, initially surviving just a couple of stages, then living long enough to save the King and his family. Over time, we edged closer to a final confrontation with Death Adder (or “Death Bringer”, if we’re faithful to the Mega Drive palette swap), a character who struck fear, trepidation and no small sense of injustice into the hearts of youngsters the world over. Not only did he possess a prodigious supply of health, and feature a bodyguard complement that would put a Papal visit to shame, he had no qualms about the cheap, liberal use of magic as a means of dismissing an already travel-worn band of heroes. While my friend and I would eventually beat Streets of Rage, besting Golden Axe would prove a step too far for a team of our abilities.

But as we’re so often told, it’s the journey that matters, not the destination, and there were few more enjoyable journeys than the one provided by Golden Axe. Its intrepid trio of characters was intrinsic to this, and unsurprisingly, they remain at the forefront of any recollections. Outnumbered and tragically underdressed for anything resembling a combat experience, it’s telling that so many of us remember the trio of Gilius Thunderhead, Tyris Flare and Ax Battler (the chap with the sword, confusingly) by name, and not by genre shorthand terms such as “the tank”, “the mage” or “the one nobody chooses”.

We discovered there were elements of Golden Axe’s design that were ideal for maintaining the harmony of a young friendship, too. In comparison to Streets of Rage, the element of friendly fire (er, friendly swooshing, in this instance) was less of a hindrance. This was perhaps down to the absence of a grapple function, reducing the likelihood that two uncoordinated under-tens would trip over each other.

Similarly, there were considerably fewer pick-ups to pilfer from under the nose of an outraged companion. Sure, you could claim a ride on one of those weird, brightly-coloured creatures and go round furiously tail-whipping enemies, but this typically resulted in a clobbering within about ten seconds, and your mate spending the next ten trying not to laugh too hard at your folly.

With a number of pitfalls dominating the levels, risks to a player’s health were not limited to an opponent’s blade. However, this worked both ways. We delighted in exploiting the age-old trick of coaxing the more gormless, lemming-like goons into the various pits that populated the later levels. Some would require a little more persuasion: a running dropkick or shoulder barge would prove just as persuasive a means of sending them into the abyss. It would become a well-worn tactic but, given the trickiness of executing such a manoeuvre with the Mega Drive’s D-pad, it was endlessly satisfying.

There were precious few health and magic drops, and absolutely no extra lives, point bonuses or boosters. This lean, mean approach placed great emphasis upon life-and-death battles, building magnificently thanks to a grandstanding musical score, blood-curdling sound effects and the constant pressure placed on preserving health and lives. What I never really grasped as a kid, was just how important magic would be in the final reckoning.

It’s not just that the special effects looked great, as each of the characters summoned a different form of elemental magic, but it was essential in the quick takedown of bosses who, along with their ample supply of henchmen, could prove energy-sapping when encounters became drawn-out. So while it was always tempting to pick Gilius Thunderhead for his potent axe attacks, limited magic capacity meant he alone was no match for Death Bringer.

The element of cooperation was therefore crucial to completing the game. Golden Axe was really hard work when played on your lonesome. Goons moved faster than any of the playable characters, and their go-to tactic was to surround you. If they succeeded, you could expect a whole lot of pain. A second player was not merely there to take out foes; they were someone who could watch your back.

I’m not sure my friend and I ever played Golden Axe together again after those holidays. Still, when I look back on the period, we made a good team. It was played in the right spirit, no recriminations, no pad-slinging when we inevitably came up short. We enjoyed the camaraderie. That was how multiplayer was meant to feel – that’s what I’d been missing. 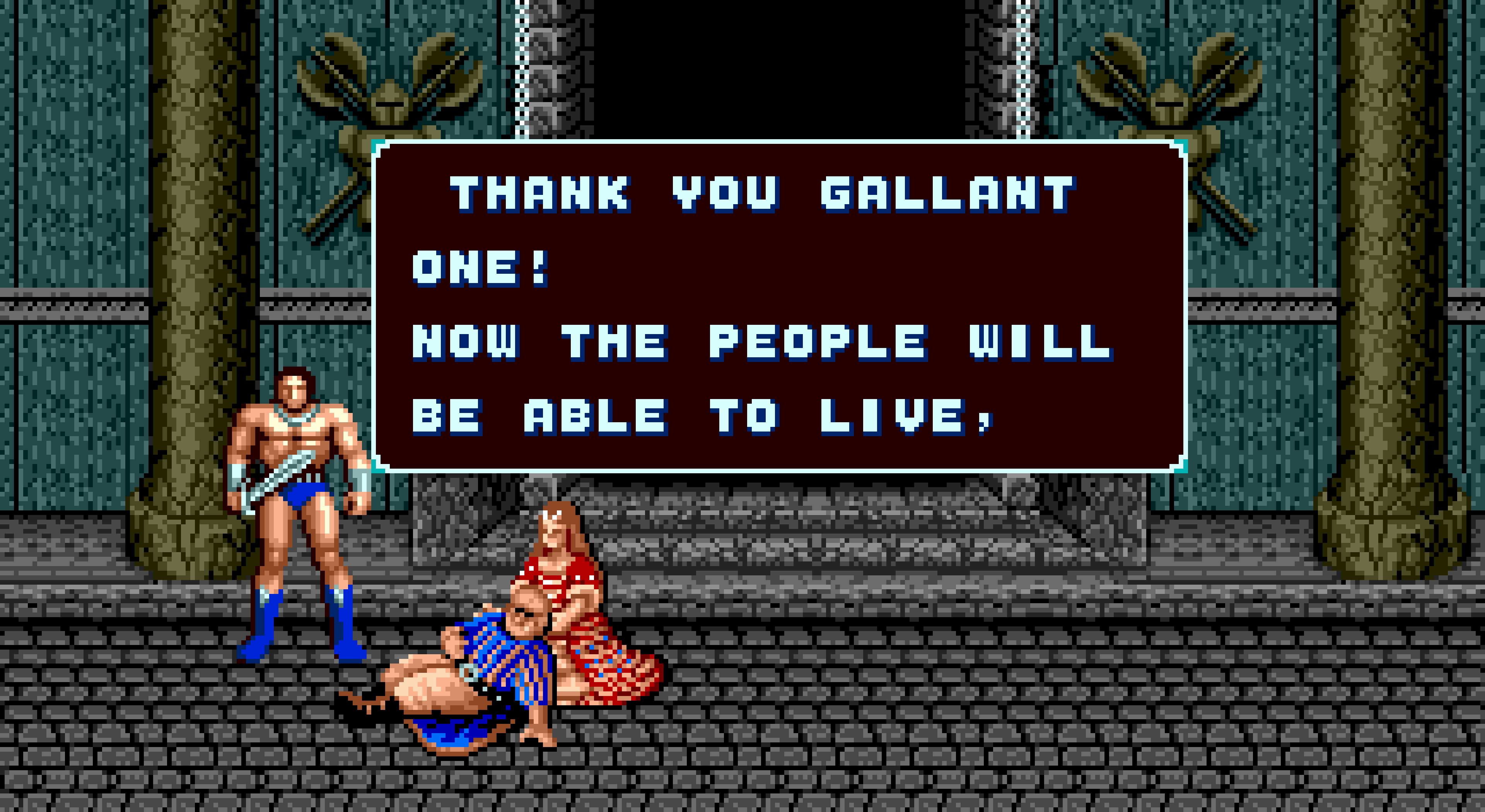 I spent the better part of the next 18 months trying to track down Mega Games 2. Such searches were commonplace before the internet made finding scarce titles easy to locate (though no easier to afford), and it surprised me somewhat to discover it wasn’t a rare cartridge. I like to think gamers knew a good thing when they saw it, and were simply keeping hold of theirs. Second-hand copies seemed like gold dust during that period, so when I eventually found my own, I made sure I kept it.

All you had to do was Axe

Golden Axe and I were reunited at last, but our tale doesn’t quite finish there. Fast-forward to the spring of 2018, and I’m sat in the pub, jabbering away to an old high-school friend. I discovered that he was a bit of a Mega Drive aficionado. He even had one set up in his house. And guess what? He loved Golden Axe (he preferred the sequel, but no one’s perfect). So I decided, with summer approaching and England set to be dumped out of another major tournament at the semi-finals stage, there was a spot of unfinished business that I wanted to tackle: one last push to dethrone Death Bringer.

He agreed, so it was round to his to reacquaint myself with three-button control pads. In one session, I relived in a microcosm the highs and lows of the summer of ‘96. It was a scrappy effort that ended midway through; then, a near-miss, as we were annihilated by Death Bringer. However, by our third try, we understood how we might, at last, get the better of the scoundrel who’d spent over 20 years taunting me from within a cardboard box in a wardrobe. One of us would opt for Gilius, the other would take on a more defensive role as either Ax Battler or Tyris, making sure to hoard as much magic as possible before dispensing it on the end of level boss.

One last push, and miraculously, Death Bringer was felled. Revelling in a credit sequence that was as quaintly unrecognisable as the rest of the game had become over-familiar, it occurred to me that it had taken 22 years to finish a 45-minute game. Good things come to those who wait, as they say. In Golden Axe’s eclectic, all-or-nothing grading system, I’d become accustomed to a C or a D for my troubles. Completing the game suddenly elevated this to A++. 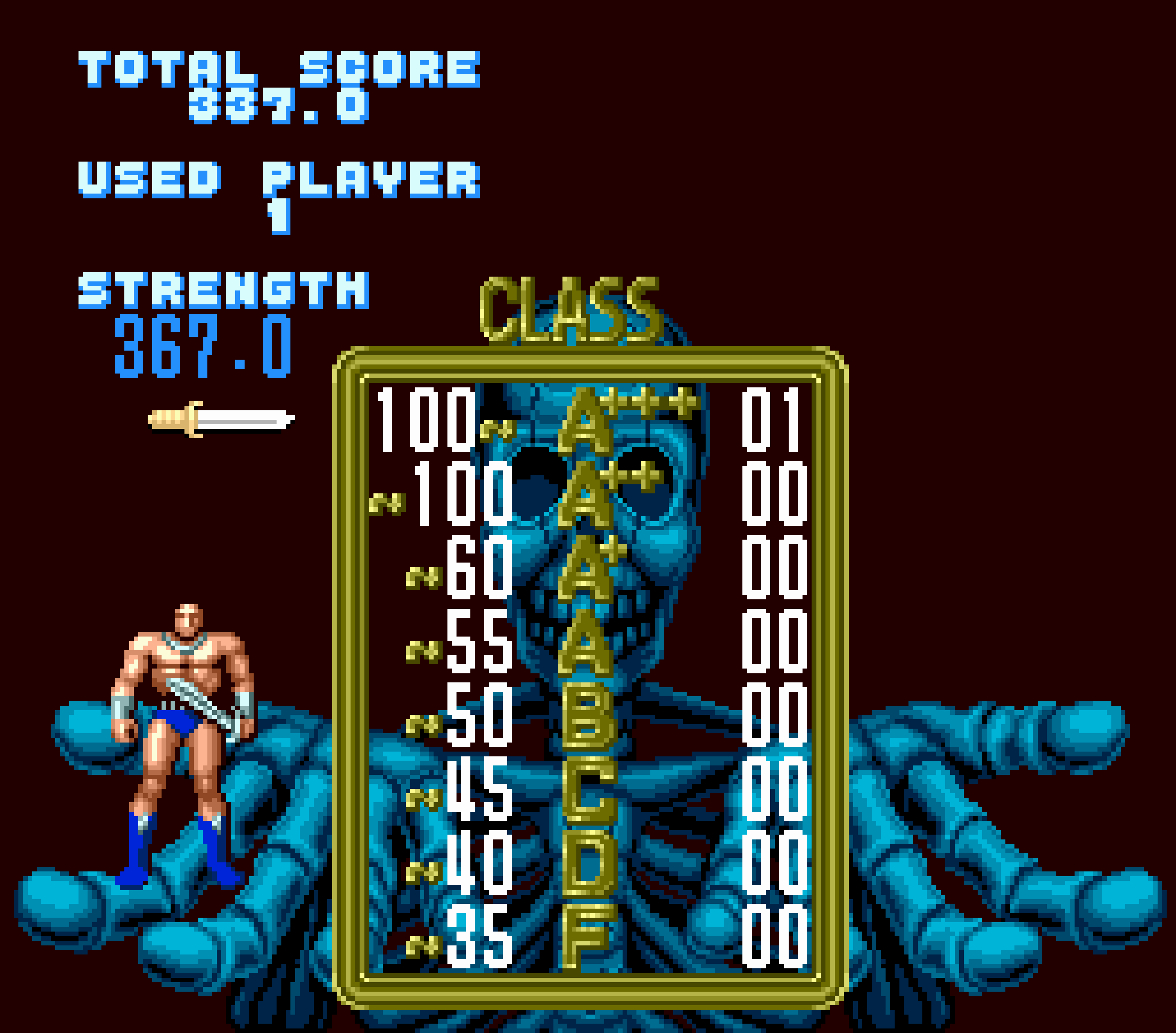 It brought to a close a rather remarkable journey with Golden Axe. It also made me wonder about the myriad Mega Drive titles of my youth that I’d been unable to conquer. Would an older head make more sense of the challenges, or would a steady diet of narrative adventures and gentler modern titles serve to scupper my once-youthful reflexes? Who knows, but returning to Golden Axe reminded me that age is no barrier for enjoying exciting adventures, and that goes for both the player and the game. 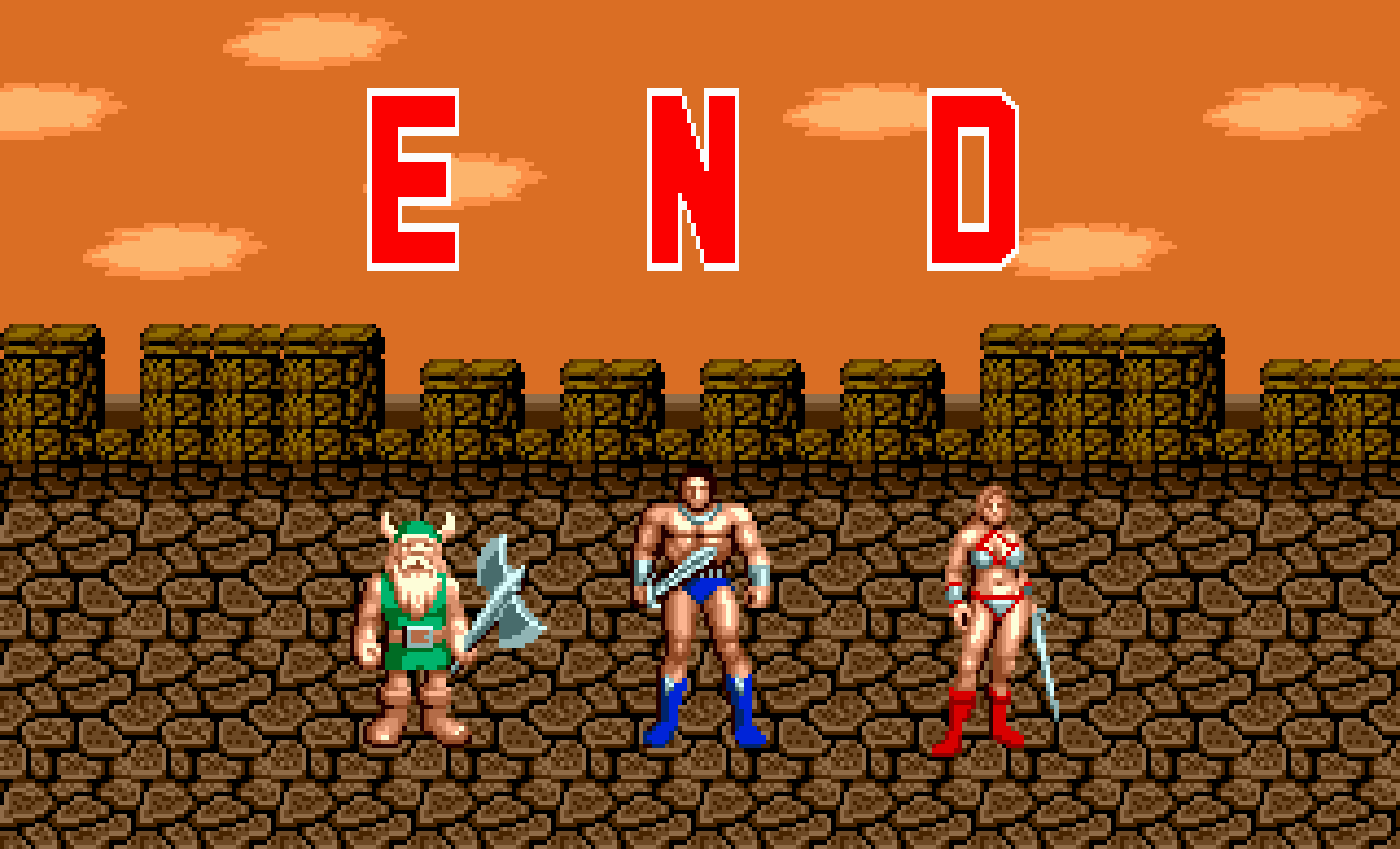 Few games capture the essence of co-op camaraderie quite like Golden Axe. Imaginative levels, a grand soundtrack and some brutal bosses made it an essential fantasy adventure. Has it aged? Undoubtedly. But Golden Axe’s wrinkles give it character.