By Gary Heneghan March 2019 No Comments

Before FIFA and ISS Pro began to dominate football gaming, football games weren’t known for their flair. However, there was one that captured Gary Heneghan’s imagination, before presentation became everything…

When I first got into gaming in the late 80s, football games didn’t really appeal to me. I didn’t really get into football for another five years, probably because the games in those days weren’t visually appealing at all. I mean, why watch 22 blobs run up and down a green background when I could swagger round Final Fight’s Capitol City piledriving goons with Mike Haggar?

Sure, the likes of the Amiga’s Kick Off had realistic, deep gameplay that everyone raved about. However, visually and audibly, there was nothing that really grabbed me. As my interest grew in football, I started to try more sports games out, but none grabbed me until a trip to a friend’s house.

This friend had a Mega Drive and some of the best games available, such as Castle of Illusion and Desert Strike. However, it was his football game of choice that caught my attention. When he put European Club Soccer on, I immediately recognised it as a conversion of Manchester United Europe from the Amiga.

European Club Soccer was better than anything that came before it. For a start, you didn’t have to play as United. This was crucial to me because, being from Merseyside, I’d been rightly trained to dislike them. In fact, the sheer number of teams you could play as blew me away. There were squads from all over Europe – loads of which I’d never heard of before. Even better, the “team select” screen had a globe with which you’d select the country you wanted to pick from, which then led to a rotating menu of club badges. 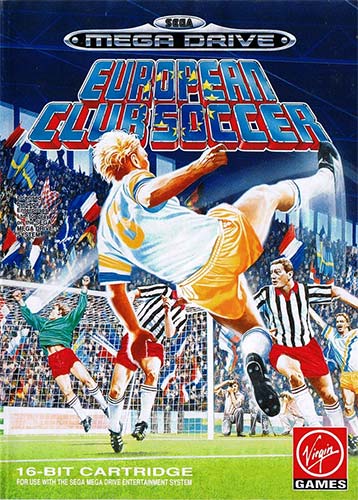 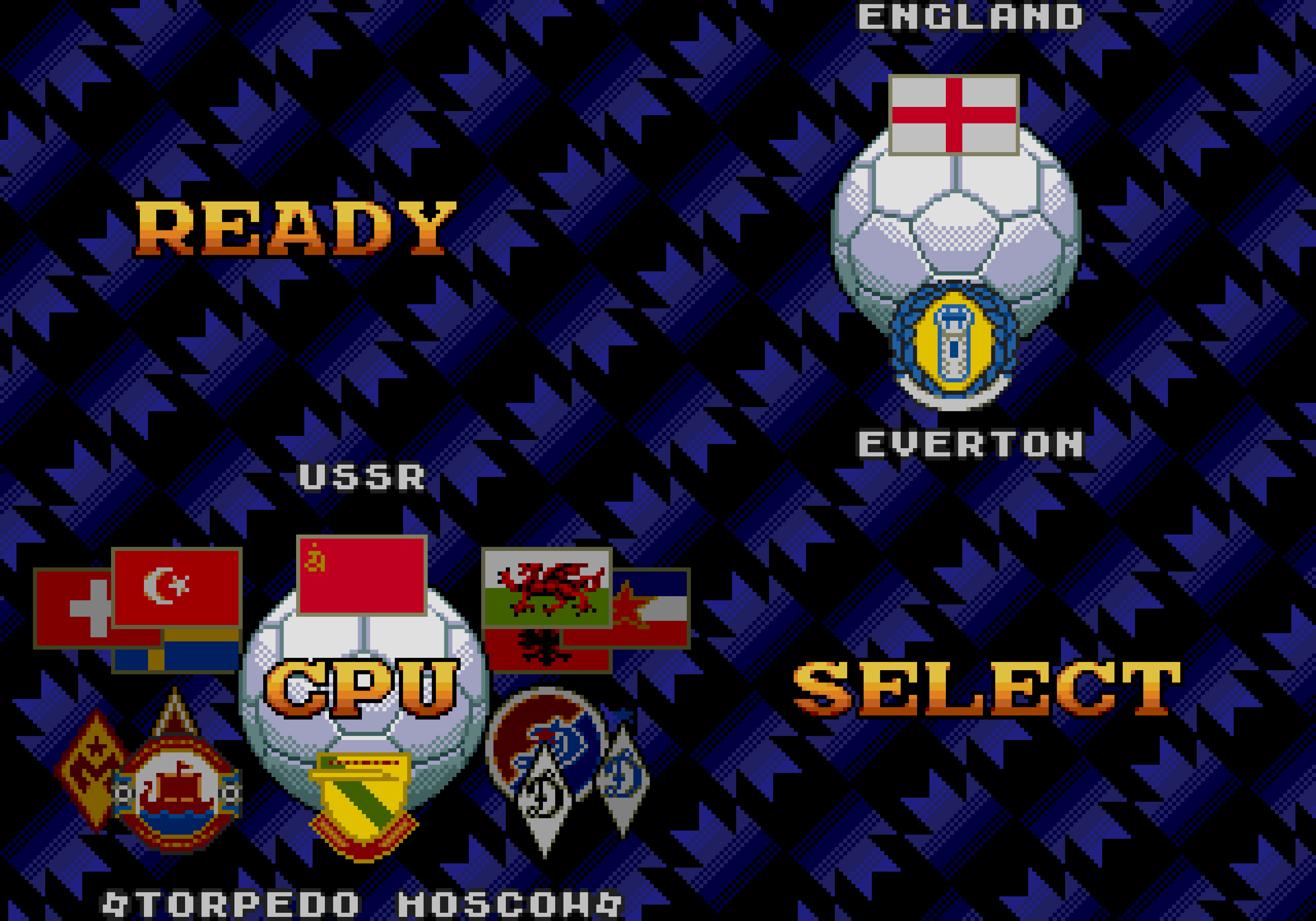 Now, these badges weren’t the real ones – fully licensed football games weren’t a thing yet – but they were close. Close enough to impress me, at least. I was used to Super Kick Off’s workmanlike menus and a limited selection of made-up teams. On Super Kick Off, you had to change the language option just to play as teams from another country. European Club Soccer was like a sweet shop in comparison – there were 167 teams to pick from, all with real team names and familiar emblems. As someone who loves choice, European Club Soccer was a 16-bit footballing dream.

This feeling extended to the graphics and sound, too. The blobs were gone, replaced by big sprites that had faces, shirt numbers and most things real footballers had, like visible legs and arms. Sure, everyone looked the same, but at least these clones looked good. The kit design screen featured big sprites and both home and away kits – something we take for granted in the era of third kits, but here, it was a revelation. Looking back, it was incredibly well-researched and mostly accurate, well before the internet made a task like that easy.

You could make your own teams and kits, too. However, you couldn’t ask for stripes or hoops, but I wasn’t greedy. Being able to clearly see my own designed kit was impressive enough for me. 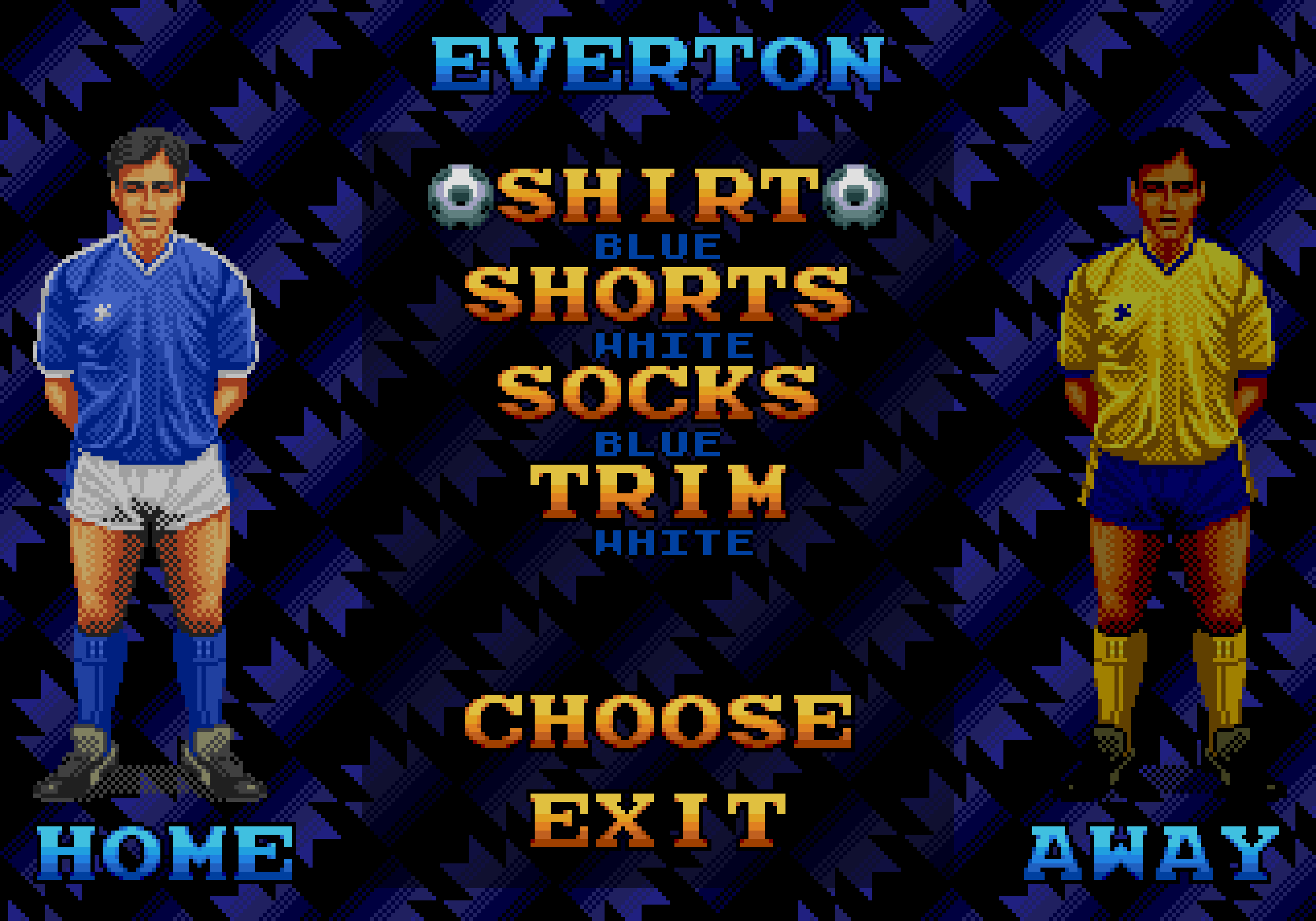 This feeling extended to the graphics and sound, too. The blobs were gone, replaced by big sprites that had faces, shirt numbers and most things real footballers had, like visible legs and arms. Sure, everyone looked the same, but at least these clones looked good. The kit design screen featured big sprites and both home and away kits – something we take for granted in the era of third kits, but here, it was a revelation. Looking back, it was incredibly well-researched and mostly accurate, well before the internet made a task like that easy.

You could make your own teams and kits, too. However, you couldn’t ask for stripes or hoops, but I wasn’t greedy. Being able to clearly see my own designed kit was impressive enough for me.

I had to have my own copy of European Club Soccer. When I got a Mega Drive on Christmas Day in 1994, it was one of the first games I asked for. In hindsight, it was a big decision. As someone who was born in January, I basically only got games at one point in the year. I didn’t want to miss my window of opportunity – I had to get everything I wanted over that month spell! European Club Soccer was definitely a game I wanted, along with Chuck Rock, Sonic the Hedgehog and Kid Chameleon. Well, that last one is a lie.

Before plunging into the European Cup, I spent Christmas night hammering exhibition mode to try and get that elusive first win. I remember it to this day: a heroic 4-2 win for Leeds United over a dogged Shamrock Rovers team. With this breakthrough, it was time to take Everton into the European Cup and get familiar with my squad. 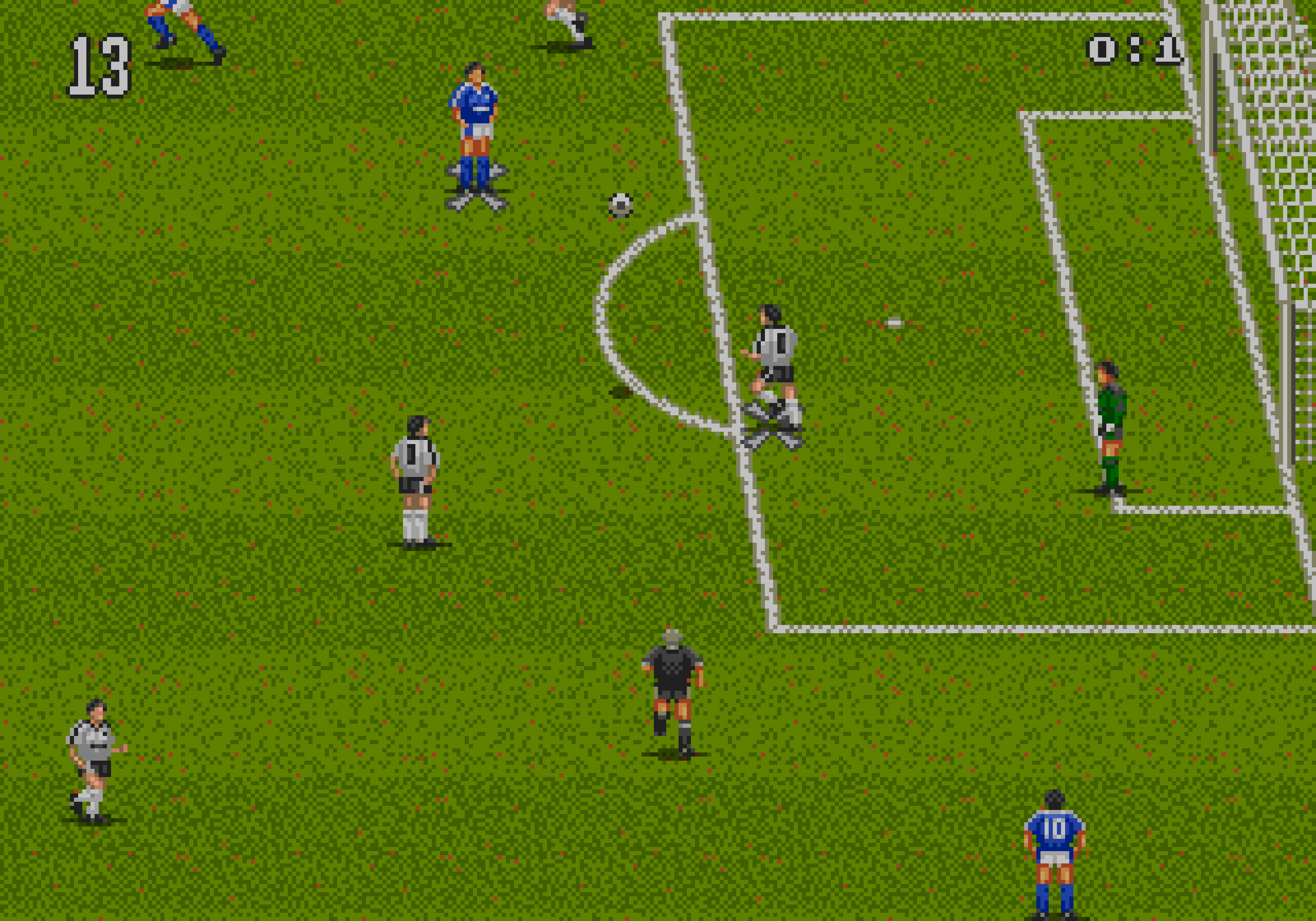 Giving Europe something to chew on

With my beloved Toffees, I was able to enjoy the impressive feature of the team’s introduction. Each player, one by one, ran out to text confirming their name and number. I loved it – it was pretty close to the team announcements in real football, minus the tannoy. If you could overlook the fact names were recycled – every English team had at least one Jones/Smith – it was ahead of its time.

The team announcements helped me get to know my team and I became very familiar with them over my campaign to win the European Cup. For my sins, I’m an Everton fan and the chance to win the European Cup with them kept me occupied for a very long time. Video games were and still are the only realistic way the Toffees are winning Europe’s biggest prize, and back then I was determined to do it.

I had and continue to proudly have a habit of giving video game characters personalities, especially on sports games. European Club Soccer was no different. I still remember that Everton line up, all these years after. There was no official licence for players but my imagination didn’t need them.

I had number 11 Gary Reid, the talented but lazy local lad who played on the wing. In goal I had Bryan Sutton, the long-serving but erratic goalkeeper. However, it was my two strikers who really caught my imagination. Number 9 was Peter MacDonald, the grumpy veteran Scottish striker who had seen the club’s 80s glory days and stayed loyal to the Blues despite their decline. Even my imagination couldn’t protect me from Everton’s 90s downturn. His strike partner was number 10, Wayne Campbell. I immediately gravitated to him as he had the same name as Wayne from Wayne’s World. Excellent! 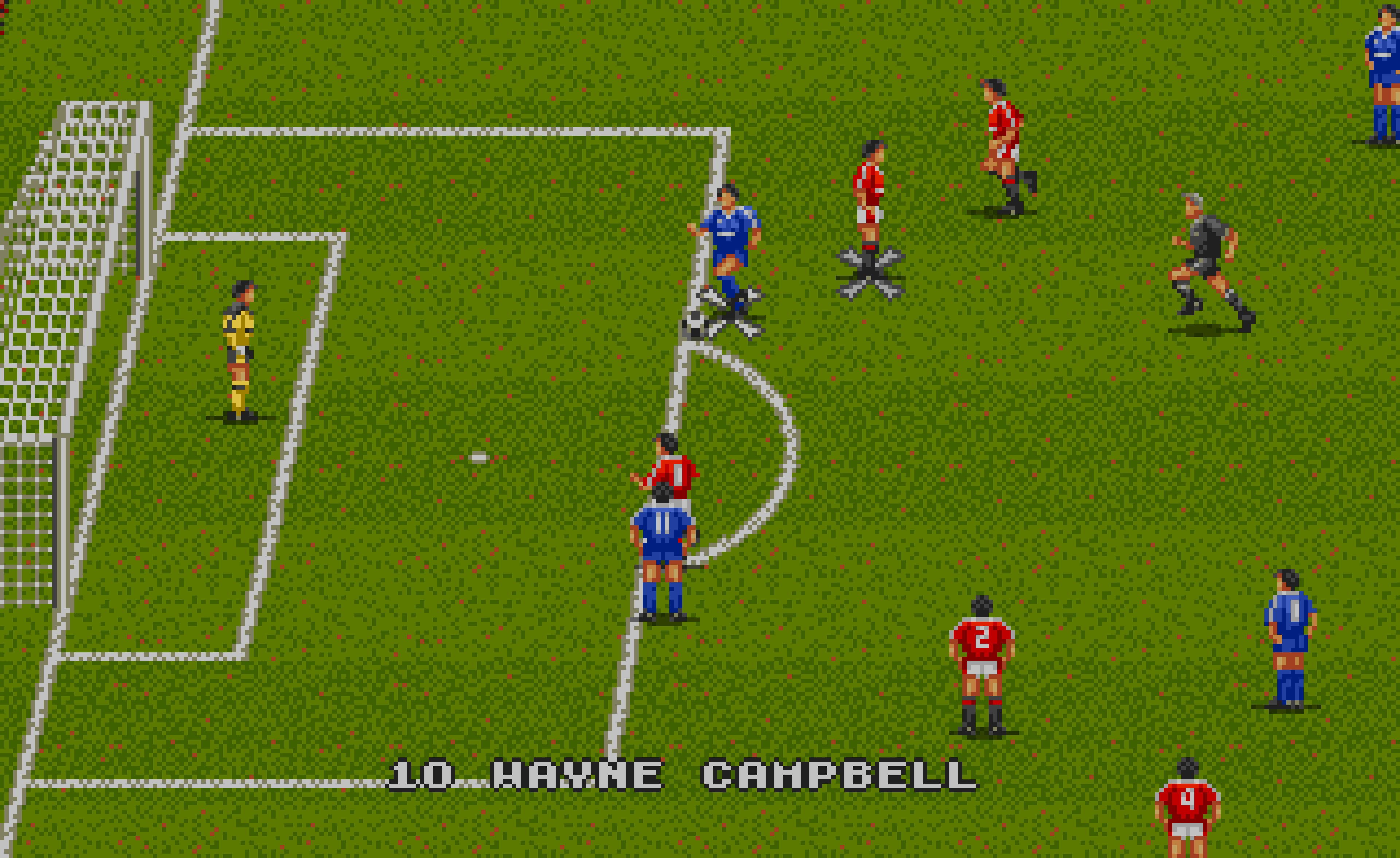 So with Aurora, Illinois’ finest up front, I set off to conquer Europe. It turned out to be a hell of a mission. European Club Soccer followed the old format of the European Championship: no groups, no seeding, just 64 teams in a two-legged knockout tournament.

I remember my early struggles with trying to win the European Cup. Two-leg rounds meant you played teams home and away, with the nightmare of away goals to contend with. Basically, if both legs finished a tie, the team who’d scored the most away goals would progress. A gutsy 3-1 home win meant nothing if you were overcome with a 2-0 defeat when visiting your rivals.

This was the pattern of my early adventures in Europe with Everton. Getting caught out in niggly second-round matches against Lokomotiv Moscow wasn’t the vision I had in mind for my Everton team.

Mind you, my vision of European football didn’t look like European Club Soccer’s gameplay. Forget sophisticated tiki-taka footy: this was proper 80s “kick and rush”. I often foiled my continental foes with a chip from midfield for Campbell to head home. The computer didn’t pass either, preferring to use the “flash bastard” tactic. Basically, the CPU would dribble away from the goal then unleash a 25-yard shot into the top corner. The number of times I conceded to the CPU’s wonder goal was damn frustrating.

No outside-the-box belter could stop Everton winning the European Cup, though. It doesn’t matter how skilful the opposition was; all I had to do was smash the ball from midfield for McDonald and Campbell to head or slide home. 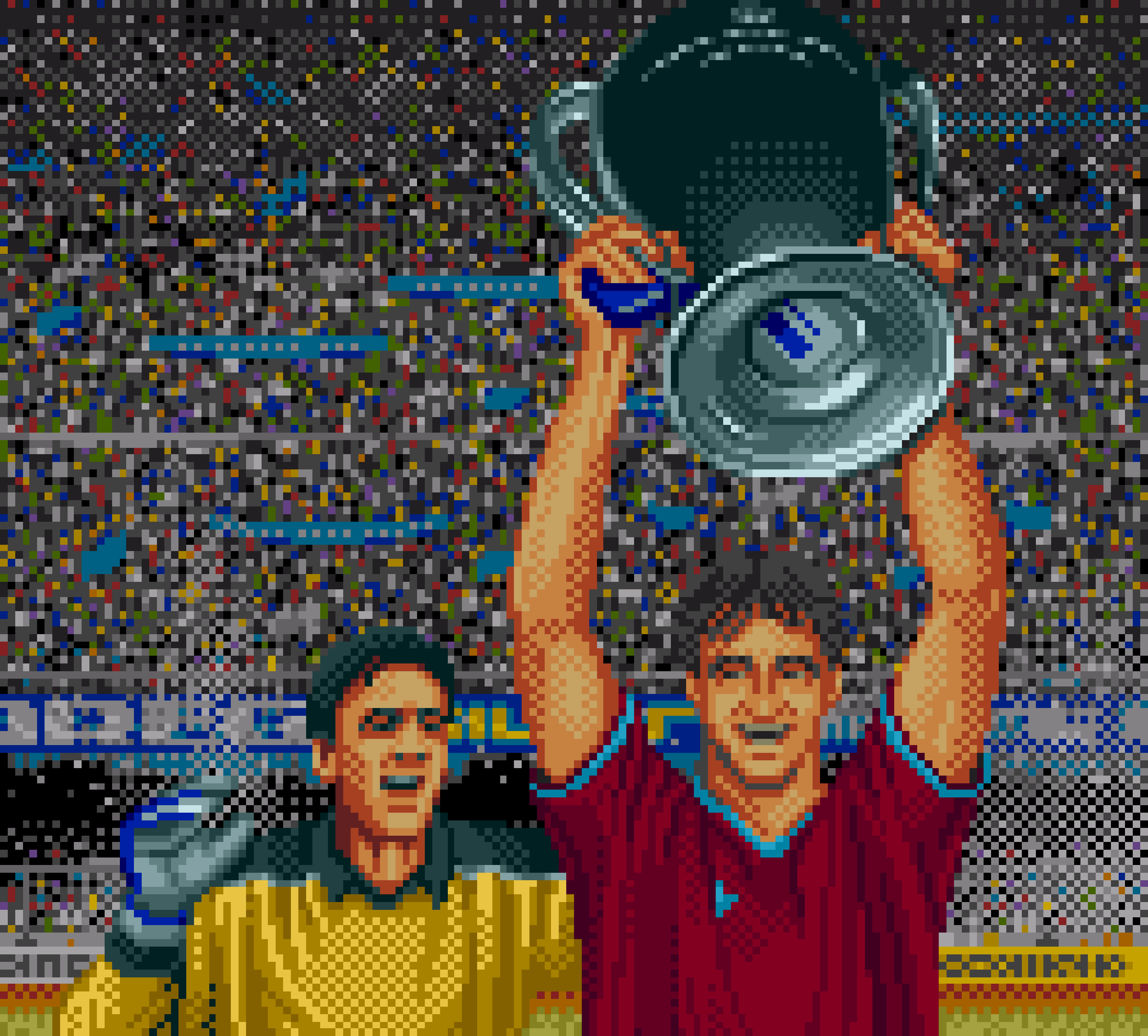 However, after winning the World Cup Championship, I had nowhere to go. Putting the difficulty level up led to “flash bastard” goals galore. Instead, I created a league. Two leagues, to be precise. I got the 12 English teams and made two leagues of six, writing out a full fixture list. Naturally, I replaced Rotherham… they didn’t quite fit in with my two-tier Premier League.

From here, I played every game over the two seasons and jotted every result down. I can’t imagine doing that now, which I suppose shows the patience I had as a kid. The league showed me that my time on European Club Soccer was over. I was a little disappointed, though… Everton couldn’t even win a six-team league, despite me giving my all.

These days, I haven’t the time for football games. With 42-game seasons, transfer windows and pre-season friendlies, it’s beyond me now I’m a grown up. I find myself thinking back to simpler times, those innocent days of taking a two-goal lead to Moscow and hoping I could scrape through to the next round…

A throwback to the days of footie games pre-Champions League, European Club Soccer is dated but it’s a charming trip back to the days of backpasses and limitations on foreigners in the squad. I’d recommend it to fans of simpler 16-bit football titles for its European Cup mode alone.