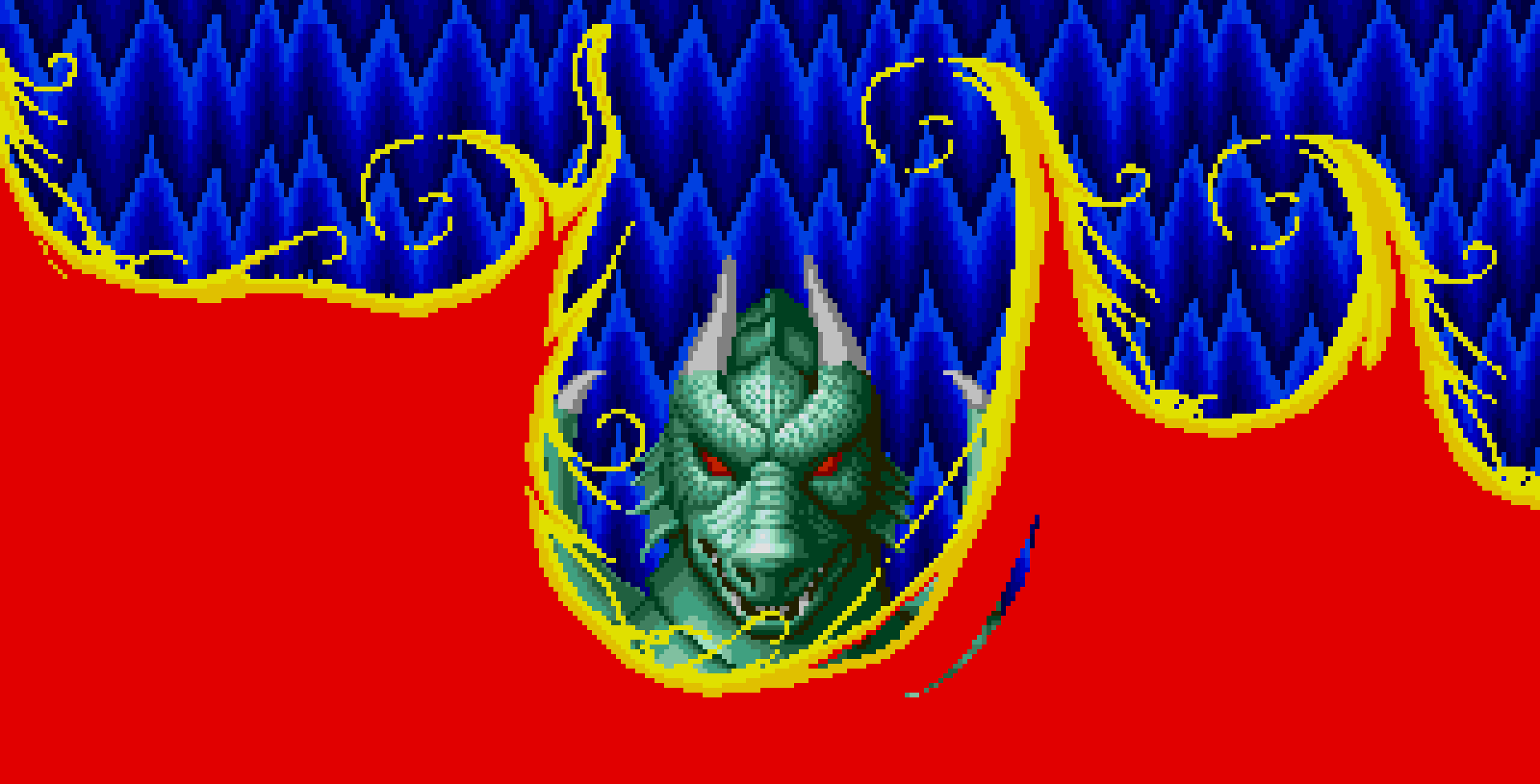 By Gary Heneghan June 2018 No Comments

Ever grown tired of video games? By the time he reached the grand old age of 18, Gary Heneghan had, but there was a game that inspired him to get into gaming again – an unusual choice, but one that has remained a favourite ever since…

When I turned 18 at the start of 2002, I’d requested a PlayStation 2 for my big ‘landmark’ birthday. To be honest, I wasn’t too bothered if I didn’t get it – when my mum pointed out I could have a big present, I shrugged and just mumbled “PS2”. I had no idea what games were on the PS2, what games I would want on the PS2 or what games were coming out on it. All I knew is I had a PS1 and a PS2 would be better… right?

The PS1 era had been up and down for me. I don’t blame Sony; I think growing up and not having the funds to buy new games, along with some truly terrible gaming purchases (Hexen, Descent and Actua Soccer come to mind), had really seen my enthusiasm in gaming diminish. Music had slowly become my primary hobby and though I still played games, there was little love for them. I simply messed around on one, then moved on to the next.

When my 18th birthday came around, I didn’t even open the PlayStation 2 straight away. Firstly, I had a hangover to shift (oddly, tiredness and Jack Daniels aren’t a good combination), then I faffed around opening other presents. Then I realised I needed a memory card (remember those?) for my PS2, so I waited for my Aunt to grab me one of those on her travels. Then I finally started up the PS2 and messed around with Grand Theft Auto III and WWF SmackDown! Just Bring It. Thinking back now, if I’d received a new console at the age of ten, 12 or 34, I’d’ve been super excited… at 18, I just saw it as another possession. 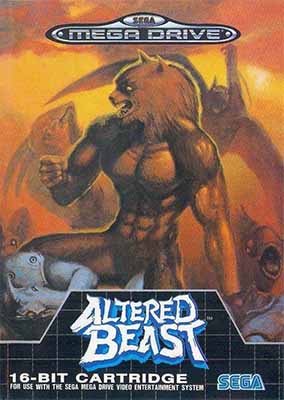 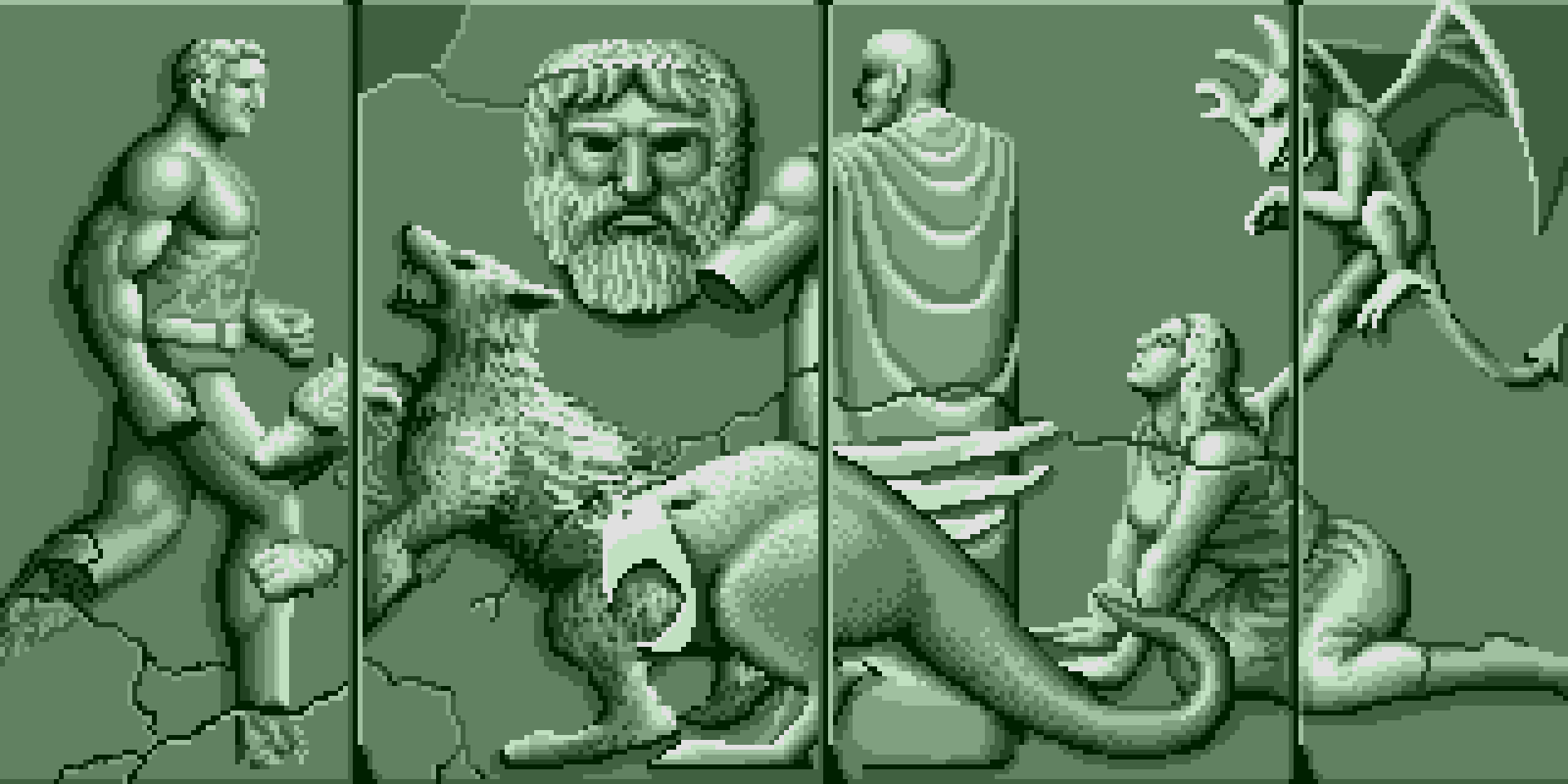 GTA III and SmackDown were soon cast aside for my new addiction: Pro Evolution Soccer. I bought it on a whim, wanting a good football game and thinking FIFA had gone downhill after FIFA 99. Soon, Pro Evo was all I played. I even joked that I should just have glued the PES disc into the PS2 disc drive to reduce the risk of it breaking. In short, I was happy with my one game on my one console.

To be this good takes Sega

That summer I left sixth-form and made a new circle of friends. I’m not sure how we got talking about it, but soon we were reminiscing about old video games. Old Sega games, to be exact. I loved Sega growing up, owning both a Master System and a Mega Drive as a kid before switching to Sony. Whatever was said during that discussion must have lit a fire under me as I was soon the owner of a Mega Drive 2. A proud owner, too – I loved the red trim and was convinced the sound was better than on the original model. The only problem was that I needed some games.

It’s part of English law that, if you own a Mega Drive, you have to have a copy of Sonic the Hedgehog, so the government posted a copy to me straight away (this may not be strictly true); I also managed to grab Mega Games II from somewhere. However, it was a trip to Cash Converters when I found the game that would change my gaming views and send me on an odyssey that would see me build and sell an amazing retro game collection, stay up far too late at night gaming, and end up writing about games on the internet (like I am now).

I remember it like it was… well, nearly 16 years ago. I saw an old cartridge of Altered Beast for 50p and remember laughing about it. “This cost like, £40 years ago!” I had to buy it, even though I didn’t think it would be any good. I had the Master System version of Altered Beast when I was younger and hated it. It was nearly unplayable and a waste of the £12 (around three months of pocket money) I’d saved up. So my purchase of Altered Beast on the Mega Drive was an afterthought, almost a joke. I basically had enough change in my pocket to buy a loose Mega Drive cartridge and thought “Eh, why not?” 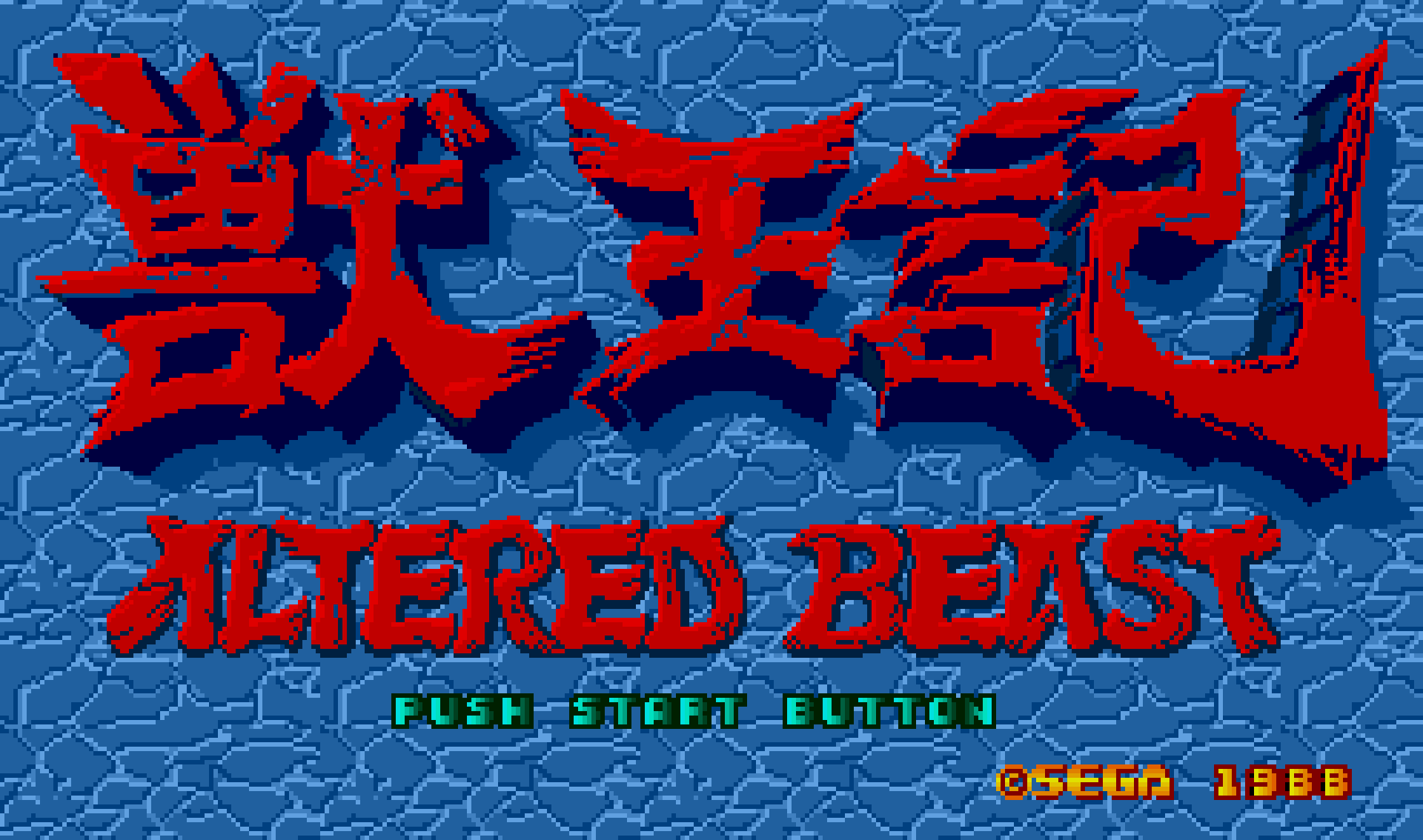 I wasn’t expecting much from Altered Beast when I got home, and so it initially proved. I found the gameplay laughable – the slow, methodical progression was miles away from the gaming future promised (and delivered) by the PS2. However, the more I played Altered Beast, the more I started to enjoy it. I loved learning the attack patterns for the first level and it paid off with the transformation scene. In my opinion, this part of Altered Beast is one of the best graphical effects on the Mega Drive – the speed of the sprite change still impresses me this day.

Then I started to pick up on the infamous speech issues. If you’ve never played Altered Beast before, the story is that you are resurrected by Zeus to rescue his daughter. Now, I know no one has ever heard Zeus speak before, so it would be difficult to know what he would sound like, but I’m pretty sure that Zeus didn’t sound like Elmer Fudd. Upon your resurrection, Zeus utters the infamous line “Wise from your gwave!” Slowly, this began to crack (cwack?) me up every time I heard it. I genuinely wonder if someone in the development team rushed the speech programming on a Friday afternoon…

I didn’t have it in me to hate a game that was so silly, yet so serious. It was like a playable B-movie. Once I noticed the speech and the over-the-top transformation scene, that was it… Altered Beast made sense to me. It wasn’t to be taken seriously; it was like an 80s action film, able to laugh at its faults and bring you in as part of the joke. The speech? Trying to get you to laugh. The silly melodramatic cut scenes between levels? Someone paying homage to old horror films. The odd movement of the enemies? Trying to recreate the special effects from old monster films.

Altered Beast was a gaming labour of love to old films and TV shows. If I’ve learned one thing from Sega during the 80s, it’s that they sure did take a lot of influences from film and TV. Look at Golden Axe (developer Uchida was influenced heavily by watching a load of Conan the Barbarian) and Alien Storm (inspired not by Alien, but Ghostbusters, according to Uchida).

Now, I’m not going to go easy on Altered Beast because I find it amusing. It was an outdated game even in 1988, with the arcade version released around the same time as Sega classics such as Golden Axe and Shinobi. The Mega Drive port, as decent a port it is, is still a shallow game and in my opinion, was only done to showcase the graphics of the new 16-bit system. Hence why it became the bundled game for the Mega Drive – it was impressive to look at in 1989, but it was a game that most people would soon skip over. 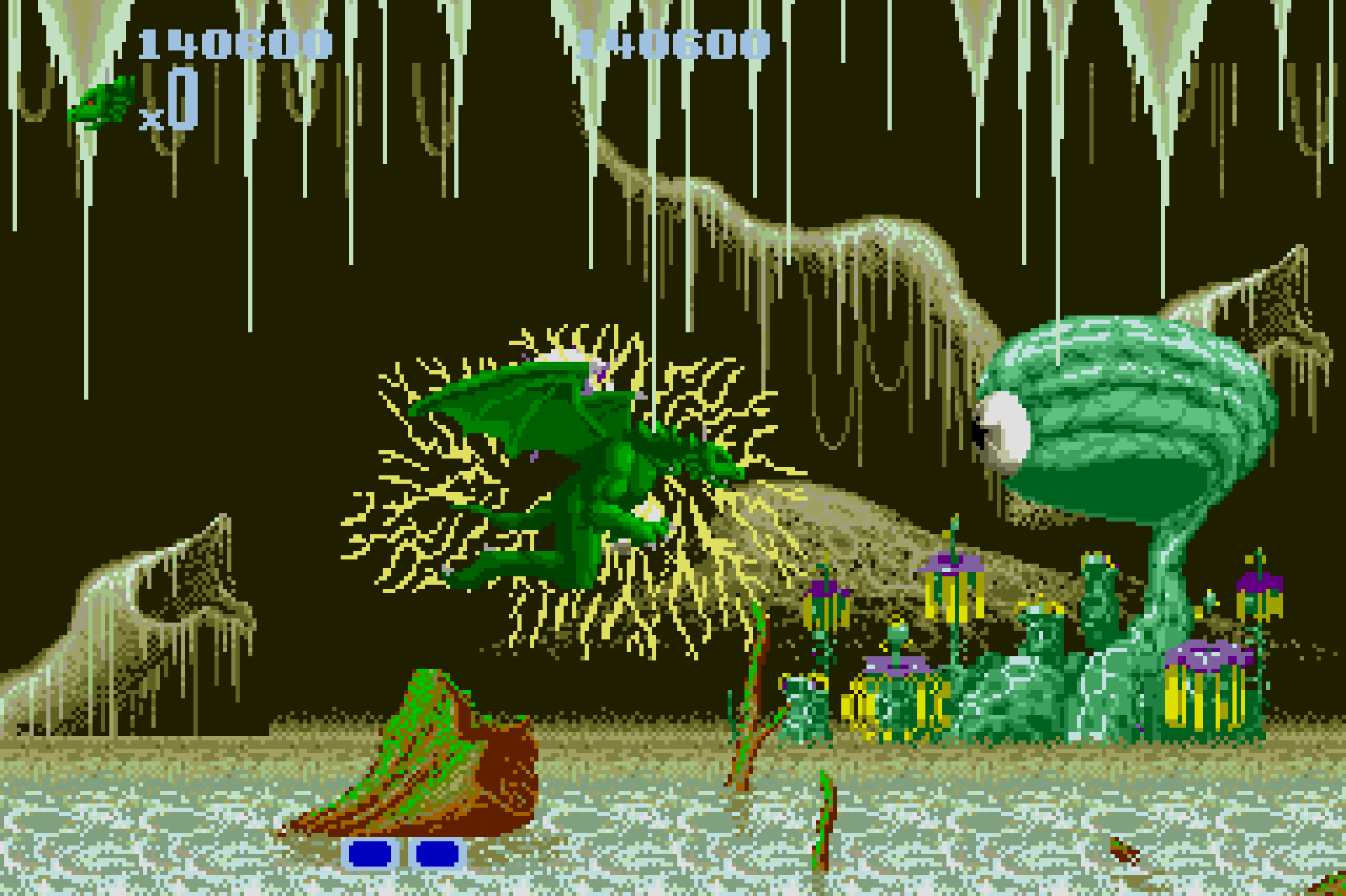 However, this lack of depth fascinated me – it only had five levels, so could I complete it? I love video games, but I’m not very good at them… a lifetime of impatience and lack of resolve has seen me build up a backlog of games that I need to return to. However, I could surely overcome five levels, right? I practised Altered Beast loads; I was able to get the first level down without taking a hit in no time, but I struggled with the boss of the second level: an evil plant-like thing that released a mass of eyes to attack you. I’d taken on the form of a dragon, able to shoot electricity and electrocute enemies, but I had no idea on how to hit it.

It actually got me down for a while. How could I hit it with the electric shot? I couldn’t get past all the eyes. Then it hit me. I was overthinking Altered Beast again. Instead of trying to dodge past all the eyes to register a hit, all I had to do was get as close to the plant monster and mash the electrocute button until it died! I remember the first time I put my plan in action – I slowly crept up to the monster and hit the attack button frantically. In true Altered Beast fashion, the boss gave me a good ten to 20 seconds to sneak up to it before it attacked, and I had no problem frying it to death.

My practice began to pay off; I was able to get through level three (a dull brown level with a bear as the beast) and level four (my favourite level in the game; the tiger is fun and it’s a good challenge). Still, I couldn’t crack level five, but I was getting confident – confident enough to put myself to the test in public… 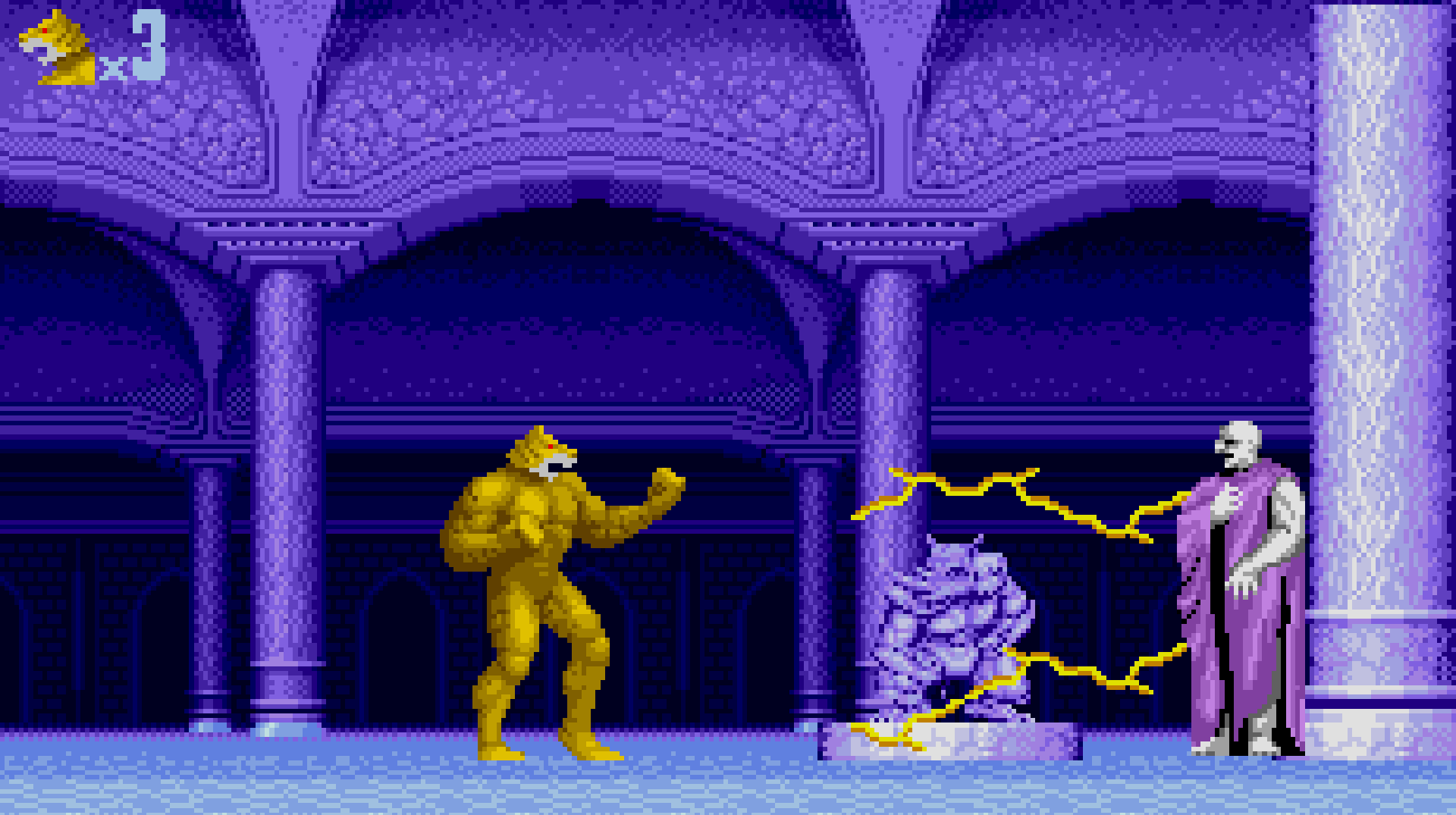 My friends often brought consoles to our gatherings, with the GameCube being the favourite. However, when a need to play Streets of Rage 2 was voiced, I brought my Mega Drive to the party. I also took Micro Machines and, oddly, Altered Beast. I think I’d brought it as a bit of a joke really – I’d become (and still am) a champion of it, always mentioning it when great games were discussed, praising its silliness and qualities to all that would listen. Somehow, the Altered Beast cartridge ended up in the cart slot and I was given the pad. It was my time to shine.

People seemed impressed with my skills as I cleared levels one and two fairly easily. I think my friends were surprised with my skills – they probably thought I was just joking when I mentioned my love of Altered Beast, but now they were seeing an expert at work! I managed to get through level three, but I think nerves got to me on the next stage, as now I realised that people were actually watching me. Altered Beast from beginning to end is only around 20 minutes long, but I felt like I’d been playing for eternity. 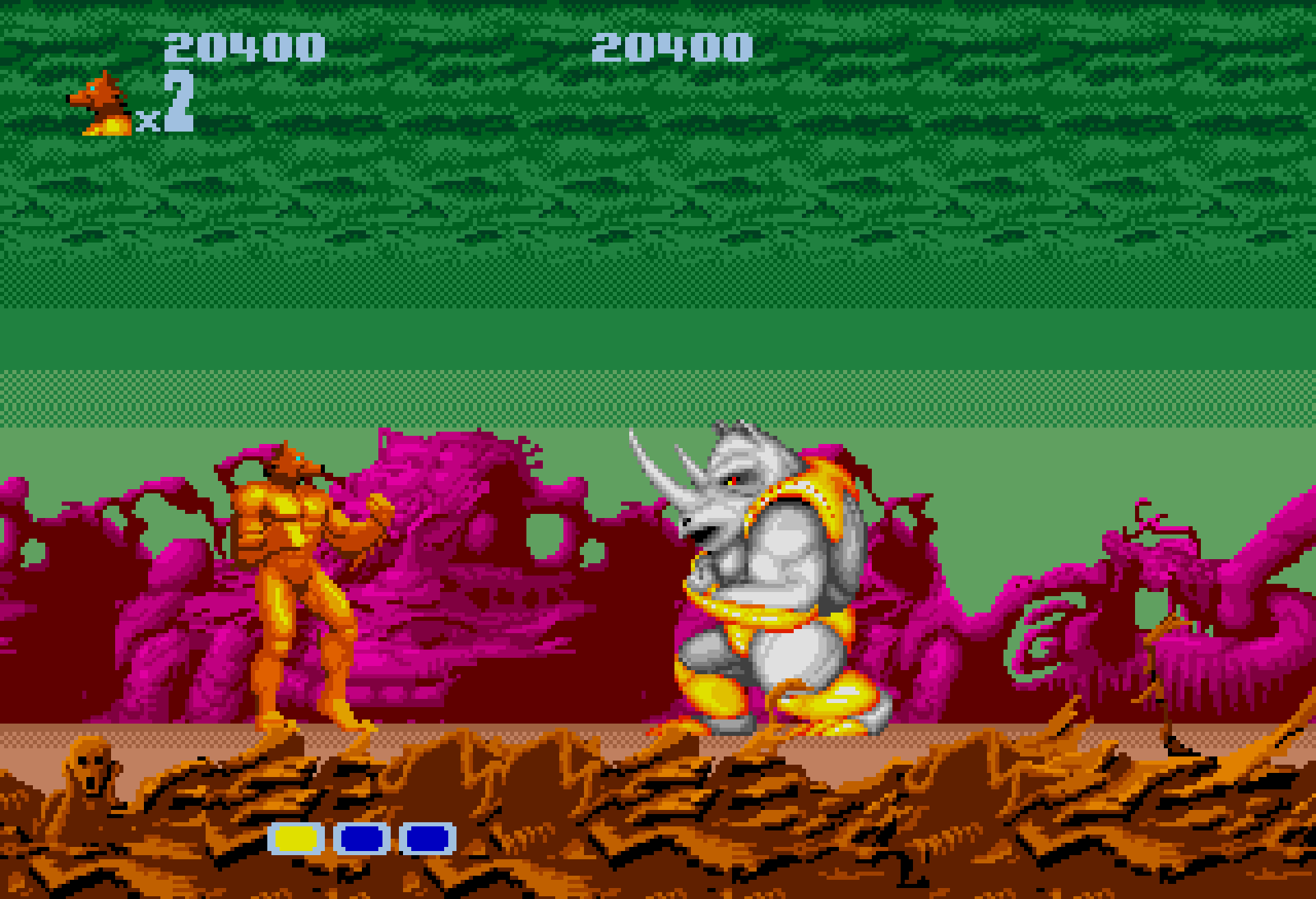 I failed at the start of level five – I think the pressure had got to me, but I had loved it. The audience’s attention, my memory and skills being tested, showing people a game I had practised and enjoyed felt rewarding. Despite being a fairly poor player, I had the spotlight on me and it felt good.

The memory of that night is fuzzy, but I’ll never forget the rush and the feeling of coming up short. Even though I’ve since beaten Altered Beast with a little help from the level select cheat, I still think back to that night. That bittersweet memory now serves as a reminder of rediscovering my love of gaming. When I load Altered Beast up now, I always smile. Firstly, because the speech is still dreadful and secondly, because it reminds me of the beginning of my video game obsession. Whether I was raiding Gamestation to build my collection, getting an Xbox 360 on launch date, or staying up late playing Fallout 3, none of this would’ve happened without this shallow, dumb brawler from the eighties…

Yes it’s slow, dated and stupid, but I adore Altered Beast. It reminds me of a time when games were magic… no DLC, no ‘realistic’ stories, no frame-rate obsessions, just a simple quest to achieve a goal. I appreciate that games are generally better nowadays, but sometimes I miss that simplicity and charm.