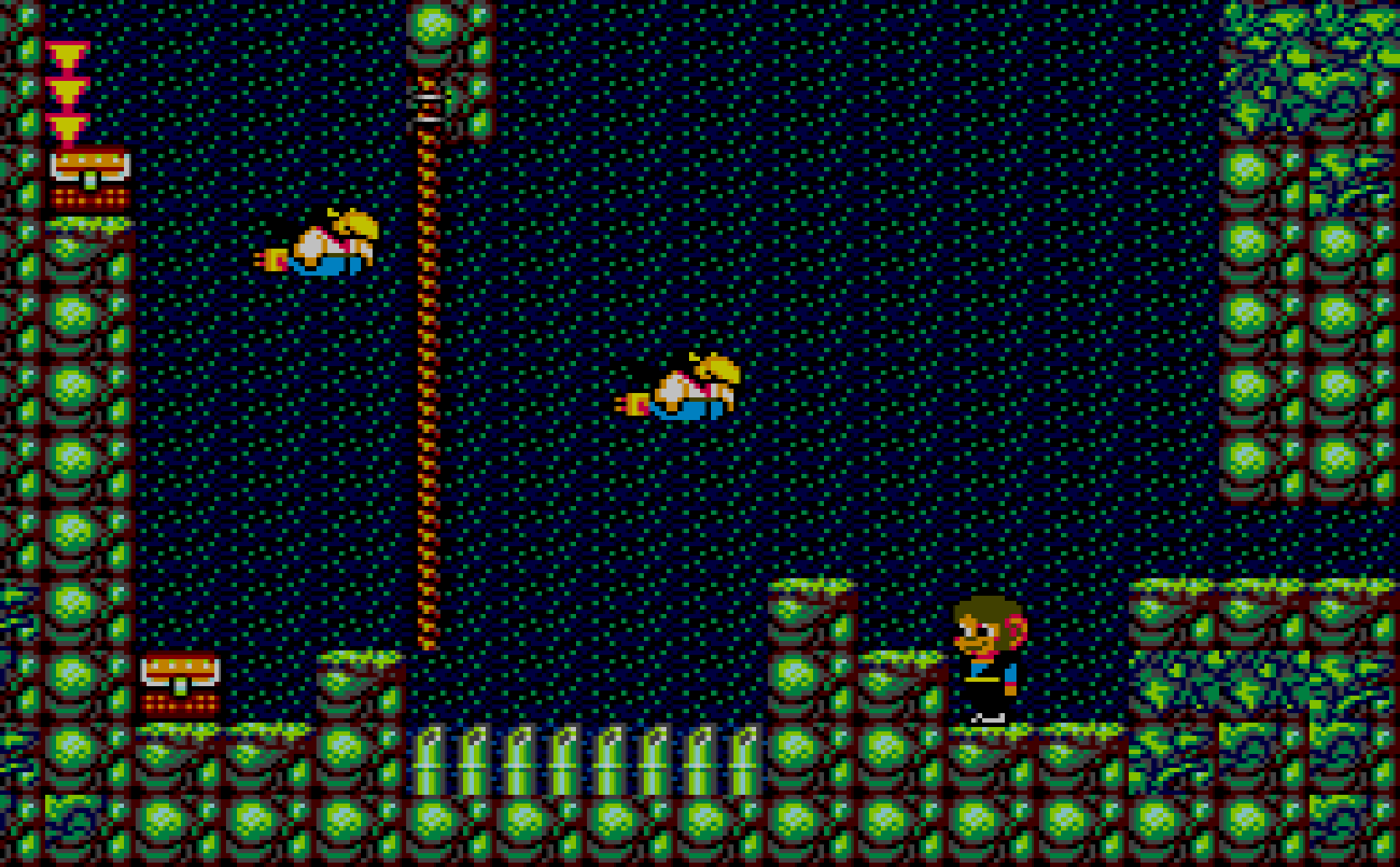 By Daniel Driver June 2017 No Comments

Classics in gaming are so often unanimously agreed upon, but it’s not unusual that there are those that disagree on the merits of any given game. Sometimes those dissenters appear to be trolls, or otherwise not fond of the series or genre in question at all. Yet I find myself in a strange position; I’m not a troll, I’m a fan of the series and the genre, but I find myself disagreeing with many on Alex Kidd. His adventures in Miracle World weren’t the pinnacle of the series for me.

That honour goes to Shinobi World.

Madness, you whisper to yourself! Perhaps, I say. Is it driven by nostalgia? Well, technically my love for the game may be, but my preference over Miracle World isn’t. You see, when my brother received a Master System 2 for his birthday, it came with Alex Kidd in Miracle World built in. This would be my first interaction with ‘Alex the Kidd’ (it really grates on me when people call him that!) and should have been the definitive iteration for me on that basis alone.

A couple of years later, my brother swapped a few games with a friend of ours. Alex Kidd in Shinobi World was one of them.

I fell in love immediately.

Miracle World was a charming but fairly unforgiving game. I could barely make it past the sixth stage as a kid and that was only by learning the levels and relying on a strict routine with large amounts of muscle memory. Kidd felt a little unwieldy at times and, aside from the amusing Rock, Paper, Scissors sub game (which was totally unfair if you didn’t memorise the outcomes when you think about it), the game is a little bland. 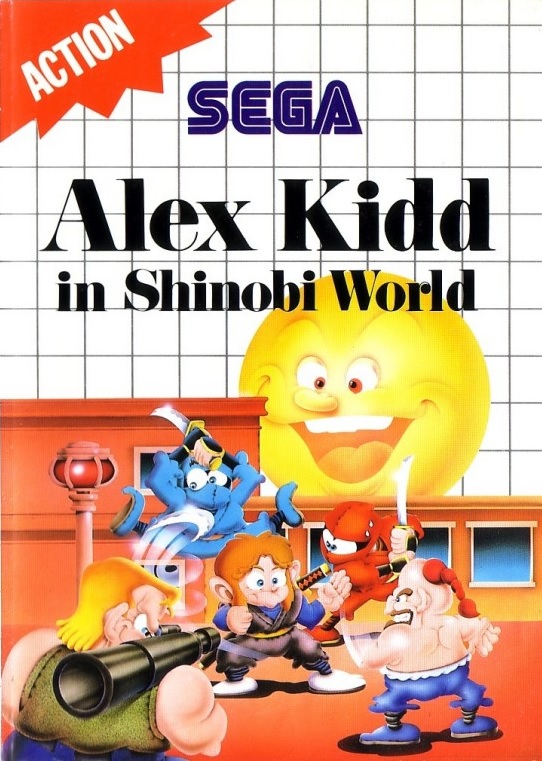 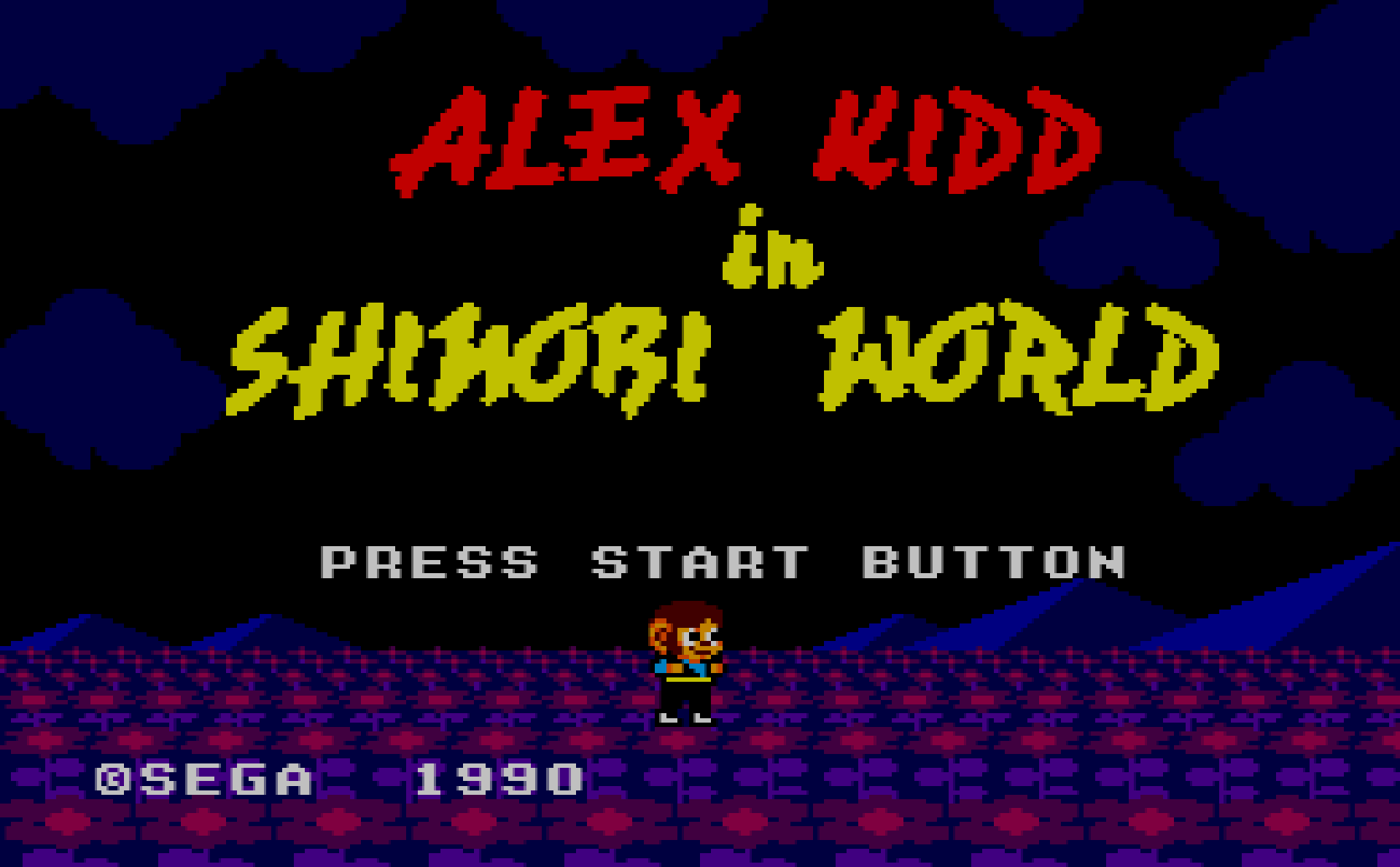 But Alex Kidd in Shinobi World? This game just popped off the screen with big, bold, varied environments. One minute you’re flying from lamp-posts in a city street, the next you’re diving into the sea to fight scuba-ninjas and sharks, then leaping around volcanoes, skyscrapers and giant dojos. It was glorious to look at, and it was a dream to play.

Kidd handled magnificently here, loose enough to feel fluid but tight enough to ensure you felt in control.  His main attack was a far more satisfying than the woeful punch in Miracle World; bringing his samurai sword up above his head and quickly arching it down. It had range, it was quick and it looked awesome! Only Shinobi Alex would raise the sword above his head like a Thundercat, before bringing down pointy justice upon his foes. 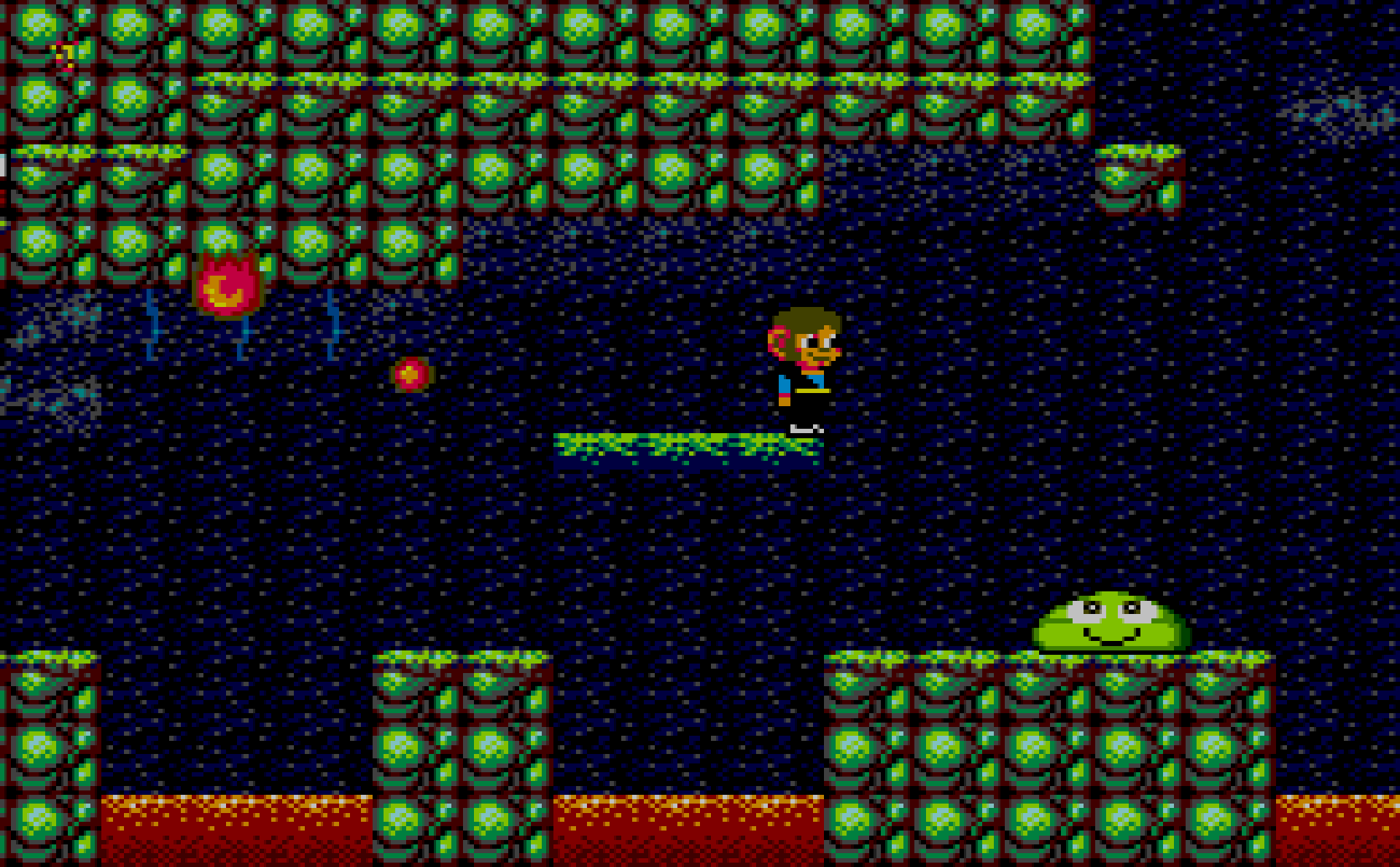 But that wasn’t the best part, oh no. Remember I mentioned the lamp-posts? You could climb them, jump up and shimmy to the top. Hit the attack button and Alex starts to spin, quickly accelerating until he becomes a blur of flame. Release the attack and he cannons across the screen like an angry firework destroying much of what crosses his path – enemies, blocks, chests, all and sundry.

Finding that move for the first time in the 90’s was like getting a flower in Super Mario Bros, sort of a “How do you like me now!” moment in which you feel like godhood has been achieved. It was an incredible move with so many applications throughout the game. Any chance I had to use it, I used it! In later levels it became essential to proceed; in many places it’s key to finding stage secrets, but at all times it’s an absolute joy! 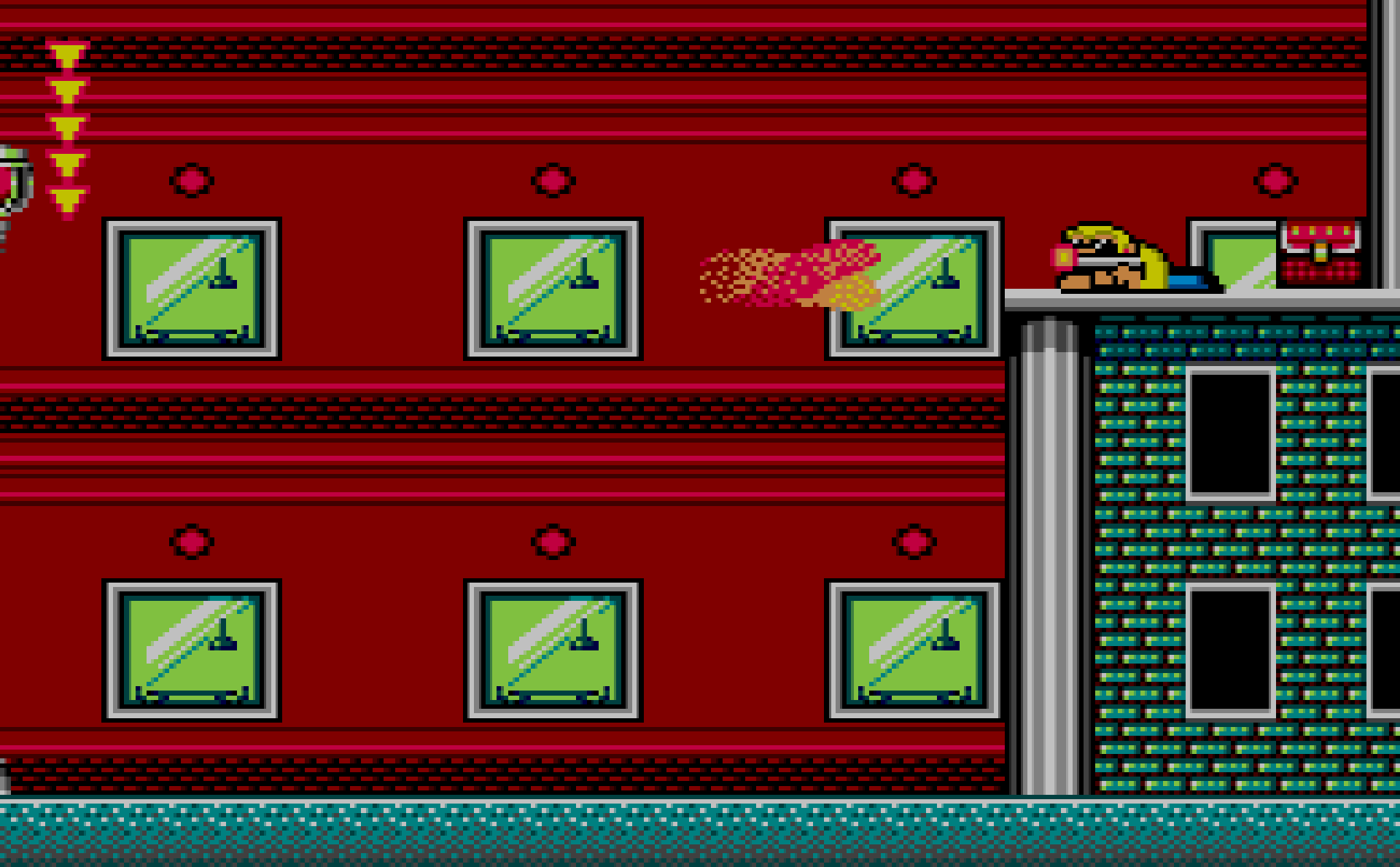 There were many other attacks driven by power-ups, too. There was a power sword that gave you a larger arc on your swing, and there was the shuriken, which let you fire off limitless projectiles for the remainder of the level. Finally, there was the tornado that that transformed Alex into a swirling cone of flying death, belching miniature tornadoes in all directions in what I can only describe as a meteorologist’s worst nightmare. 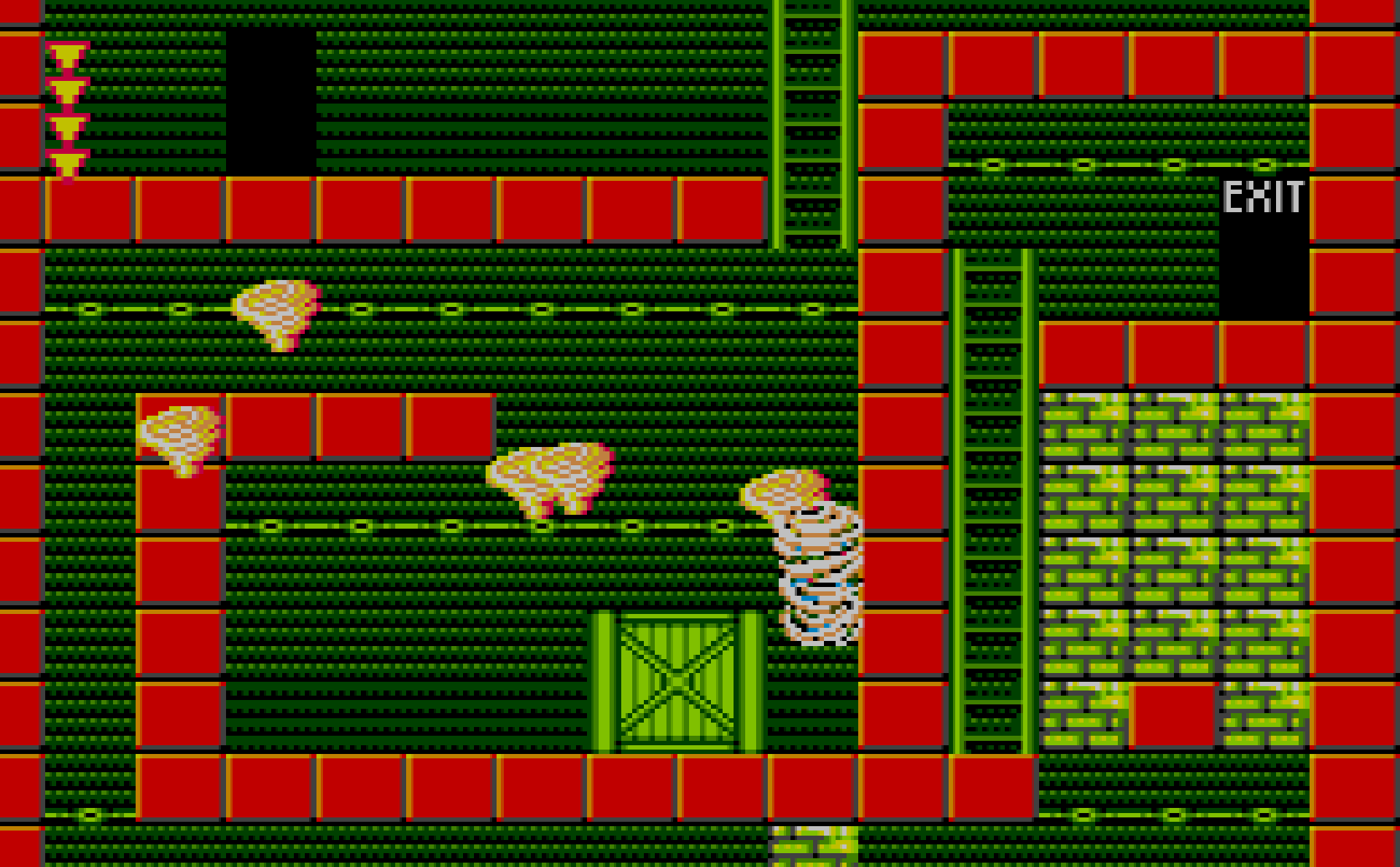 If the game sounds a little off the wall, that’s because it is. And if you thought Janken’s hand-head henchmen from Miracle World were odd, you haven’t seen anything. This game throws all sorts of oddities at you, with a giant submarine shaped like something from Easter Island that pukes helicopters at you in stage two, and a giant lobster (called Robster) in stage three. Quite why the Ninja Master decided to recruit such bizarre beings is beyond my comprehension, but then I am merely a man who likes videogames and not trained in the art of the ninja.

At this stage it’s only right that I mention Shinobi, not as in World, but as in the series featuring (at that point) Joe Musashi. This game is so gloriously crazy because it was originally designed as a parody of the Shinobi series, much like Parodius is to Gradius. The story goes that Alex was swapped in near the end of production to increase the game’s popularity, along with some other changes. I remember as a kid thinking Kabuto, the first boss, shrunk very much like Mario when you’d hit him enough times. Sure enough, many years later I discovered that boss’ name was actually Mari-Oh in the prototype. 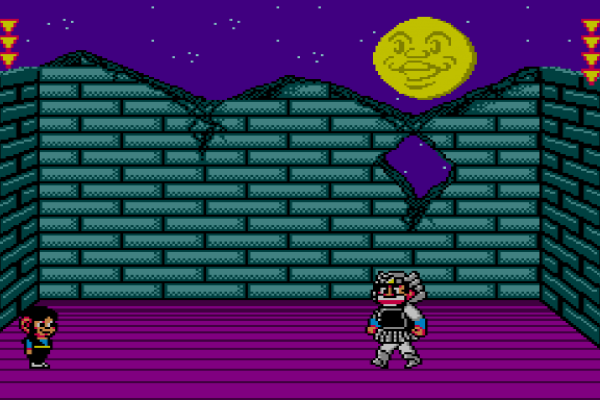 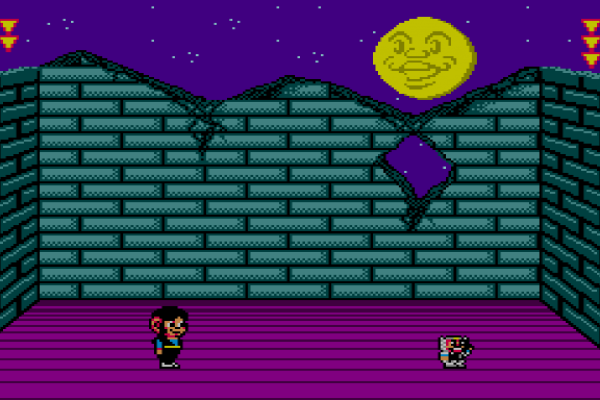 This game works on many levels, as a parody and as an action platformer itself. I’m still not sure whether the story itself is a parody, since at face value it’s fairly typical of videogame fare back in that era. An evil ninja has abducted Alex’s girlfriend. Why? Apparently, he’ll sacrifice her to control the world, which he seemingly couldn’t already do with his army of assassins, his scuba ninjas, his vultures, sharks, giant lobster and submarine that vomits choppers. It’s nonsense, but told in a sincere way with the game’s opening cinematic, which is kind of at odds with the whole parody idea.

Nonetheless, it’s enough to get you going and you’re grateful that you have that incentive. As I said, the game is a joy to play. It’s still reliant on memorisation as many games from the era are, but it’s always fun, never a chore and when you die, it doesn’t feel unfair. The levels are wonderfully designed, showing you how to play and use your skills, while being chock full of little secrets, one of which will give you a bonus at the level’s end. 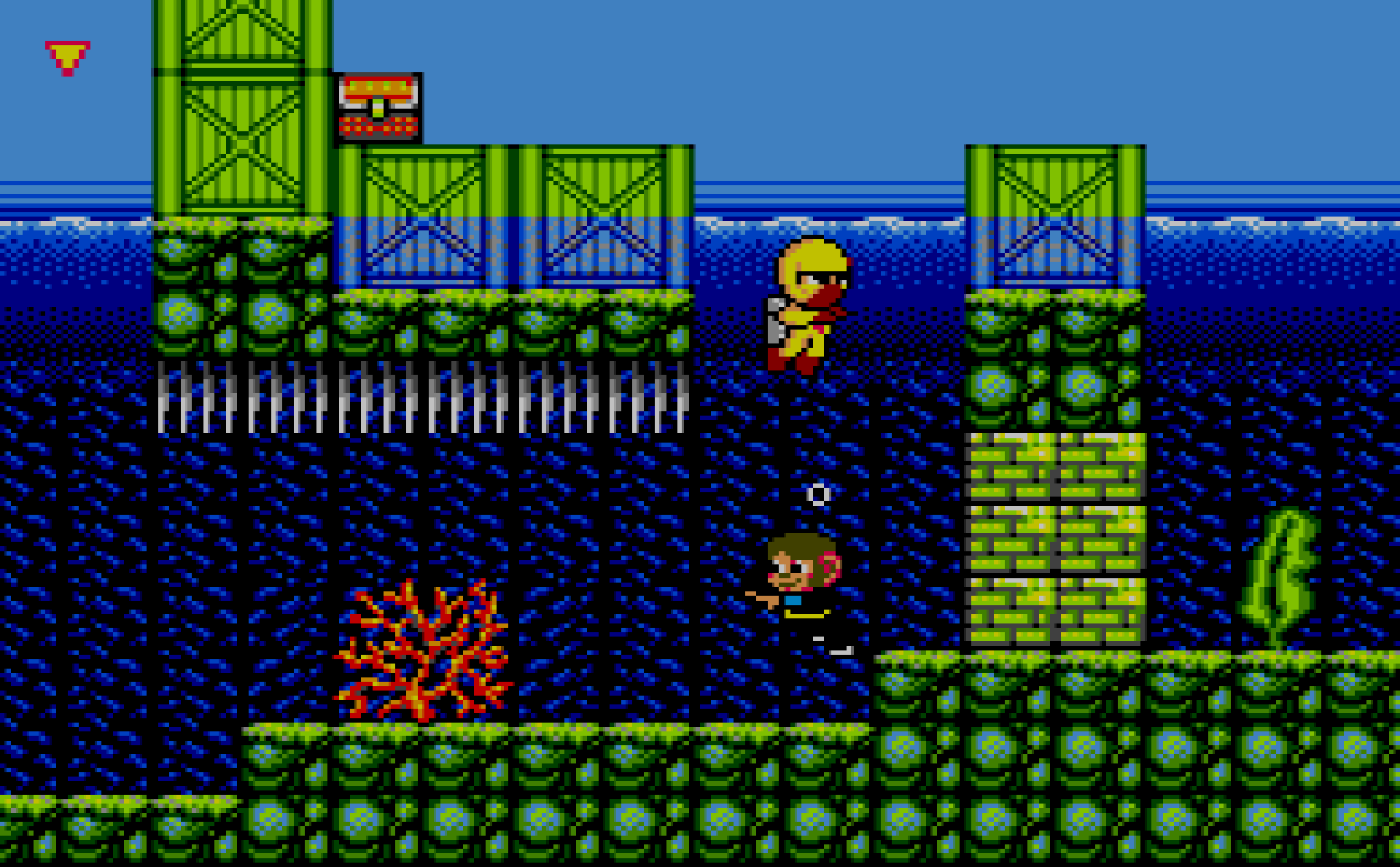 It’s a short game: four stages, each with two sub levels and a boss fight. Is it easy? It feels easier, and the multiple hit points do help a lot when you consider it against the instant death of Miracle World. It still a decent challenge and one that will keep you going for a while. It certainly took me a number of weeks to get through it as a ten-year-old, and the final boss battle is utterly brutal.

Playing today, this game maintains a lot of its charm. Why it isn’t as celebrated as many of its peers, I cannot say. It’s a wonderful little title and one of the best games for the system. It’s definitely the best game in the series, in my opinion, beating out even Enchanted Castle and its 16-bit prowess.

Returning to it now has been like picking up with an old friend. Time has moved on, but the connection is as strong as ever. If you have a Master System and don’t have this title, then you owe it to yourself to pick it up and hopefully you’ll agree that it deserves its place in the pantheon of SMS greats, right alongside its more popular elder brother. 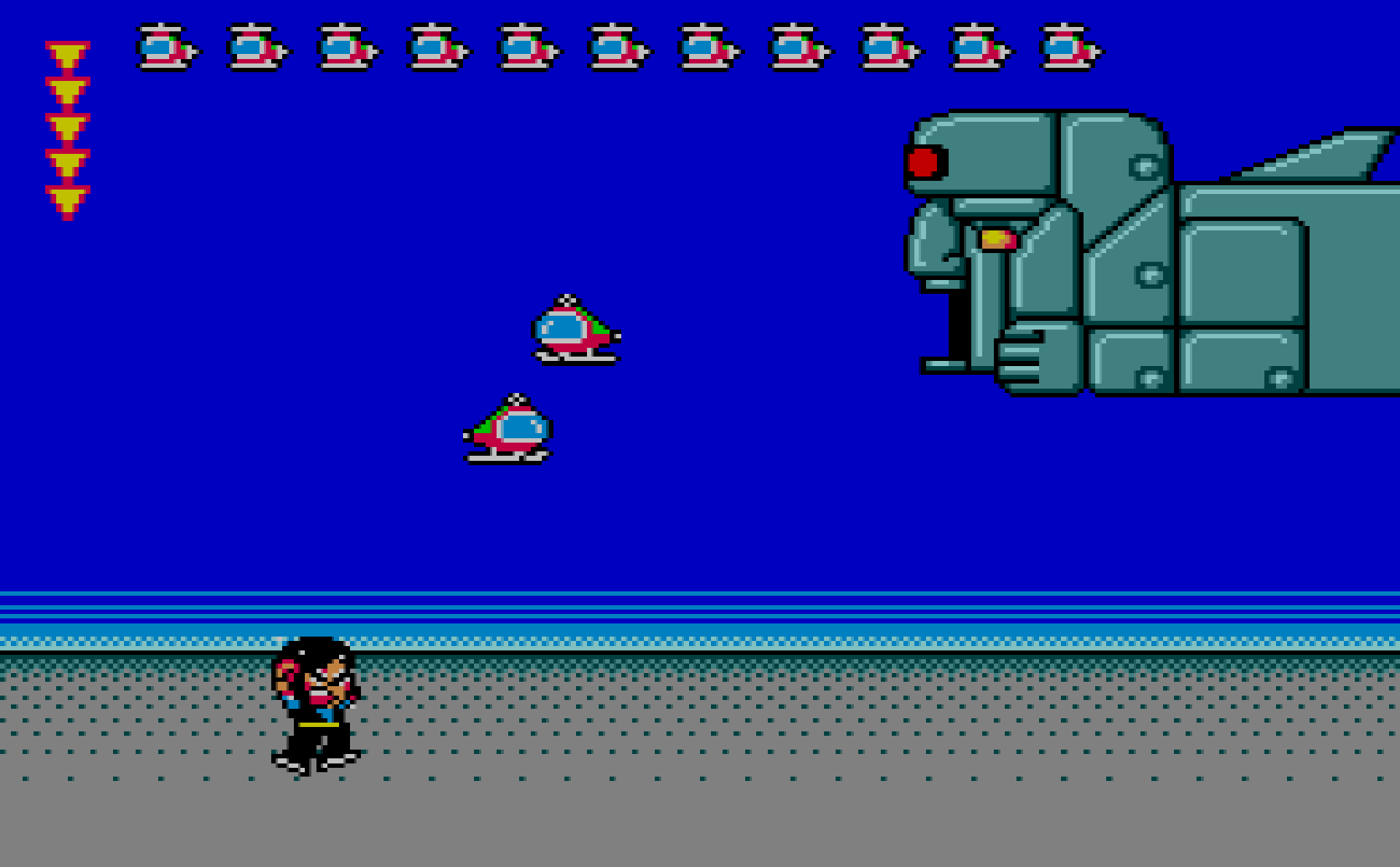 A stone-cold 8-bit classic worthy of recognition among the very best the generation and the genre of that time had to offer. It may be a little short – leaving you thirsty for more – but every moment is only of vivid blue-sky Sega gaming bliss.