The Legend of Zelda: The Wind Waker

Iain Mew was late to the Zelda party, but The Wind Waker proved to be his gateway drug to the classic series, with a personal twist.

My roommate during my first year at university was a decent, considerate guy. Once, at 2am, he fell over a chair in the kitchen, stumbled in, stomped up the stairs to his bit of our duplex room, and when his phone rang, answered it with a hushed “I’m trying not to wake up my roommate”. I was touched.

He did genuinely make an effort, but we had some other significant differences. He was also really into playing and listening to metal, and didn’t believe in headphones. I was a passionate fan of soft indie music, and we didn’t find a lot of common ground. However, we would find something to bring us together, and through it I found an experience with gaming and music that enhanced both alike.

It went like this: I had a cheap TV and, after an early trip home, he brought his GameCube to plug into it. The only console I’d owned up to that point was a PlayStation, so it was my introduction to both the next generation and to Nintendo consoles. We played a lot of Super Smash Bros. Melee with other housemates, with me playing the traditional newcomer role of annoyingly spamming Pikachu’s thunder at everyone. I also have fond memories of watching him play his way through Eternal Darkness: Sanity’s Requiem and Beyond Good & Evil.

Yet the most vivid GameCube memories I have come from the best thing that he did for me that year. One day, after a bit of discussion of our favourite types of game, he suggested that I try out The Legend of Zelda: The Wind Waker. 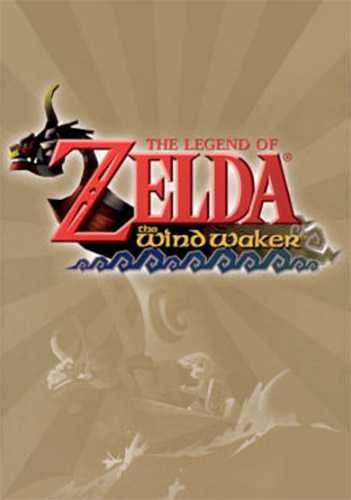 After the sideways experimental step of Majora’s Mask, The Wind Waker was Nintendo’s proper console follow-up to Ocarina of Time, the most legendary entry in its already revered action-adventure series. It brought in a completely new cel-shaded graphical style, and a change to a world largely made up of water. As well as going brilliantly with the graphical change, its world was also a more open one, with the chance to sail everywhere almost right from the beginning.

A link to the past

The Wind Waker inevitably sat in the shadow of Ocarina of Time, something that Nintendo grappled with in the game itself, which slowly revealed many specific links through to the story of Ocarina. For me, though, my only previous experience with Zelda was watching my brother play through bits of Link’s Awakening on a Game Boy emulator, and some half-remembered details from the Nintendo sticker books which were all the rage in my primary school class one year. The closest I had to a personal precedent for most of what The Wind Waker did was Little Big Adventure 2.

That meant that all of The Wind Waker’s charming world, epic scale, and intricately designed puzzle dungeons were not a continuation of Zelda hallmarks for me, but new and wondrous. I loved taking Link on an adventure at sea, meeting the game’s characters and solving its mysteries. Even the treasure-hunting sections that I encountered later were added to compensate for a lack of dungeons. At the time, I didn’t feel anything was missing. The fact that I played it first obviously had a big part to play in it becoming my favourite Zelda to this day, but I still think its approach is brilliant. 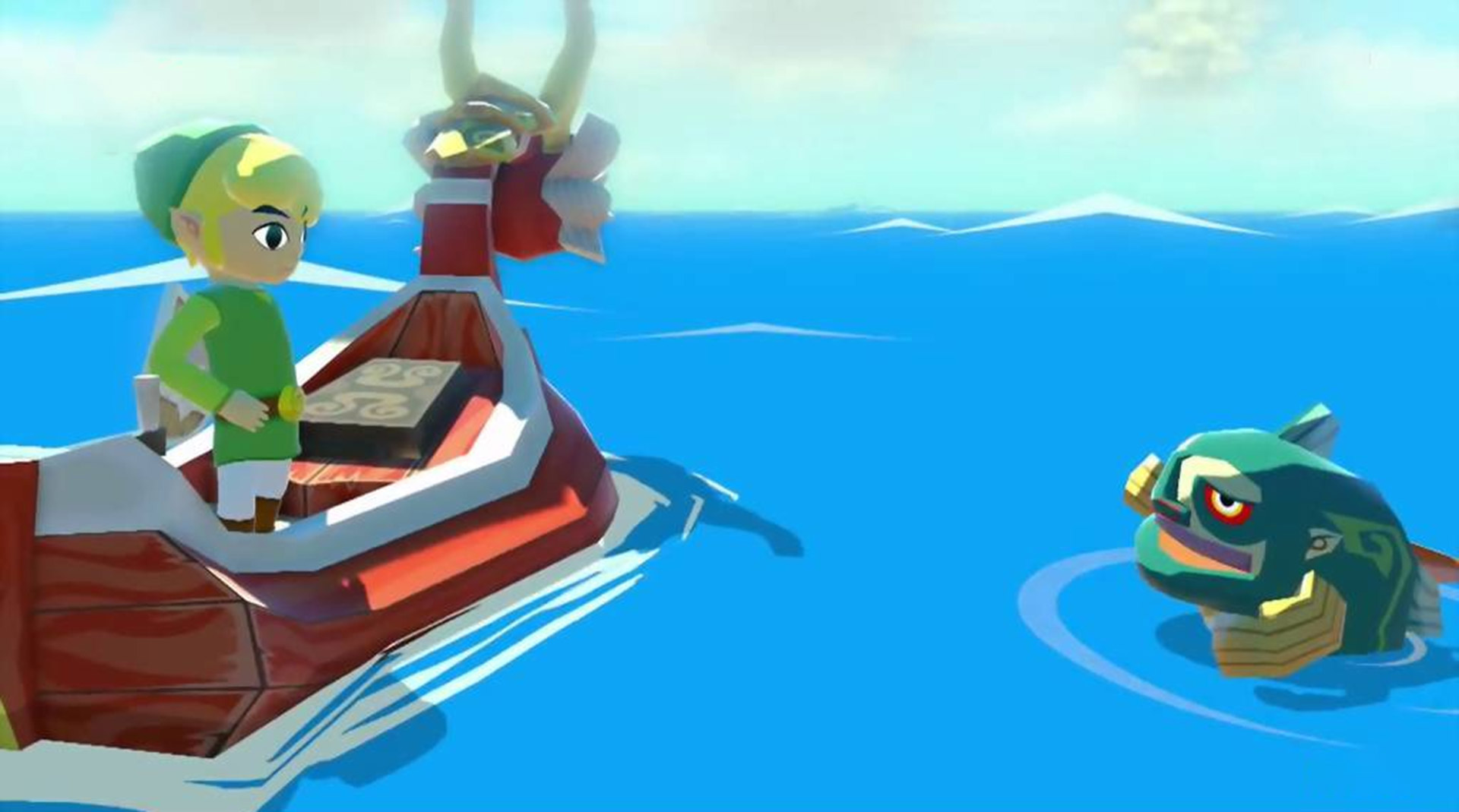 The bright colours were the most immediately noticeable part of The Wind Waker’s consistent bold and expressive style. Its characters’ outsized faces and guileless expressions were a gift to physical comedy, in scenes like the one where Link is about to be fired from a cannon and gets a countdown to launch with each number accompanied by a rapid cut to a new expression of apprehension.

That same style meant that alongside cutscenes with explosions and mystical laser beams, a simple wink from pirate captain Tetra could be a moment of bold dramatic exposition. It flowed through to things like the way written text used giant and tiny font sizes, as well as the dramatic musical cues with each slash of Link’s sword during combat. The game’s systems were united in ensuring maximum expressiveness. 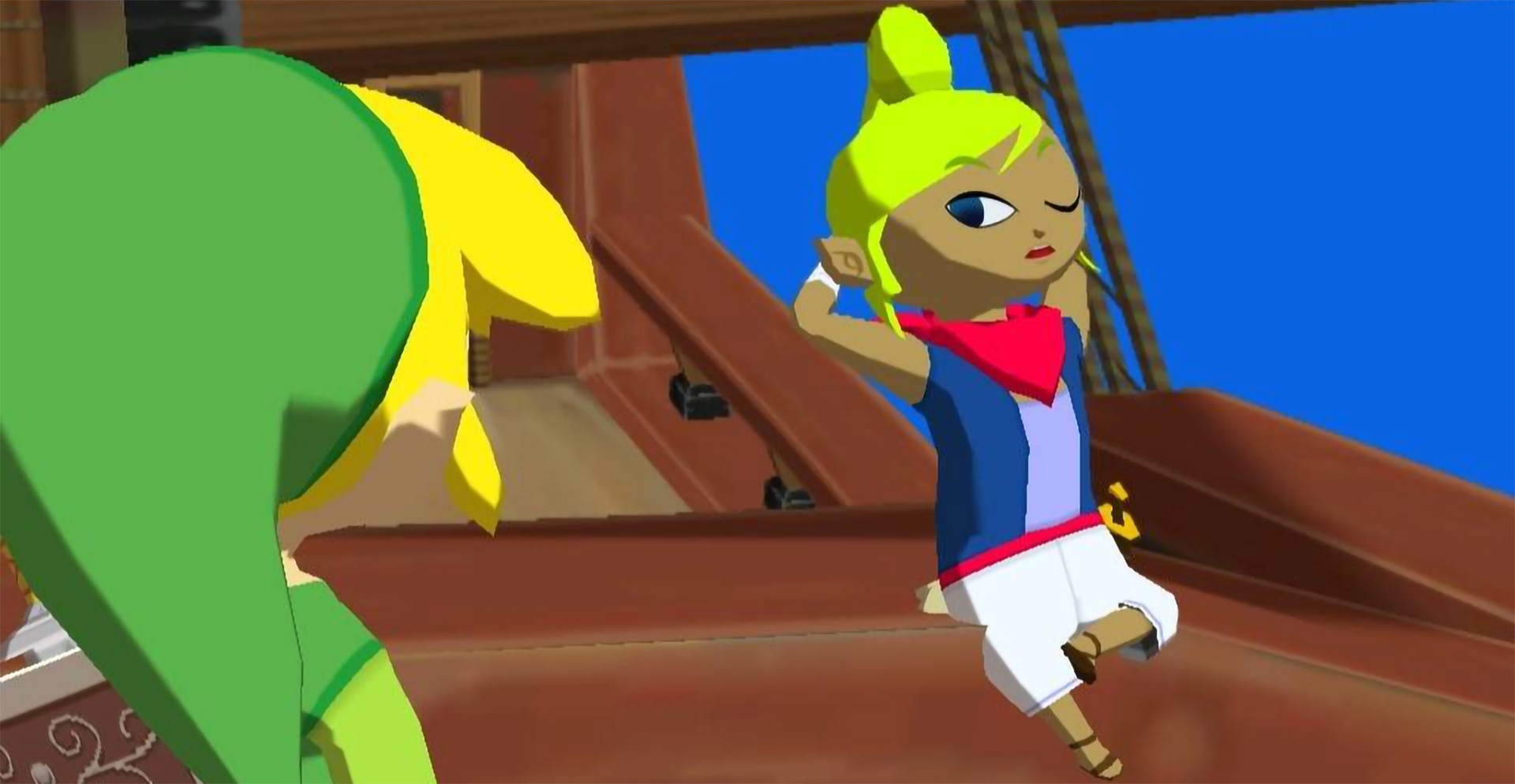 Those cues were just one part of The Wind Waker’s wonderful music. The main theme that played at sea – with its echoes of Zelda’s original overworld theme present like whispers on the breeze – was best of all. Yet despite all the best efforts of composers Kenta Nagata, Hajime Wakai, Toru Minegishi and Koji Kondo, theirs is not the music most associated with The Wind Waker in my memories.

Making your own music

See, The Wind Waker was a very long game – and while it helped me rapidly fall in love with video games again (or, at least, this particular one), my love for indie music wasn’t going anywhere. I also had a self-consciousness that left me without the same confidence to play my music out loud with others around. So when I had an afternoon when I didn’t have lectures and my roommate wasn’t around, it was usually filled with playing The Wind Waker on mute while listening to the latest albums.

When I played the game again recently, the specific musical associations came back to me. Belle & Sebastian’s Dear Catastrophe Waitress, with its cartoon orchestrational trills like the band’s own move into cel-shading, and chatting to the merchants of the Great Sea. Snow Patrol’s Final Straw, crystalline determination, and Link climbing the Tower of the Gods. (I had the good sense to turn The Wind Waker’s music back on afterward for the trip to the kingdom under the ocean, the jaw-dropping narrative centre of the game). Sailing the sea to the sounds of Death Cab for Cutie’s Transatlanticism.

I had just come to the classicist American indie of Death Cab for Cutie through singer Ben Gibbard’s part in the gorgeous synthpop of The Postal Service, so it was a new discovery to me as well. My favourite song on Transatlanticism was its centrepiece title track, an eight-minute-long slow build from piano chords and sparse feedback to a spray of drums, rushing waves of sound, and the repeated line “I need you so much closer”. It balanced a sense of wonder and sadness while describing what was, by cosmic coincidence, essentially the backstory to The Wind Waker:

The sailing aspects of The Wind Waker were not its most broadly popular. The HD remake introduced extra ways to cut down on the amount of time spent traversing the ocean. To me, though, sailing was the heart of the game, for the same reasons as I loved the song I’ll always associate with it. Sailing in The Wind Waker was an experience of tranquility and possibility. I could drift away on music while enjoying the openness of being able to see nothing but the ocean, before another island gradually came into view, full of things to discover.

The sense of distance mattered to the story. It wasn’t a game that went so heavy on doom and peril, but the sense of isolation, reinforced by the time it took to get between islands, made its characters’ predicaments feel deeper. When meeting those whose family members were missing thanks to villain Ganondorf’s scattergun attempts at princess-capturing, the same distance and need for closeness amplified their heartbreak. The Wind Waker’s world was one of melancholy beauty, and happening across the perfect soundtrack drew it out even better.

After playing more 3D Zelda games, I realise that The Wind Waker reinvented very few core gameplay elements, but its hyper-expressive approach created an evocative world and story that still stands out as uniquely beautiful.