By Daniel Driver July 2017 No Comments

You never forget your first, and, in my eyes, this first in question was jaw-droppingly beautiful. My heart was racing as I tugged at the rigid instrument that protruded from my lap. I couldn’t look away as I jerked my stick faster in a state of increasingly frantic joy with that final climactic moment drawing closer. Finally, the rush of adrenaline comes, I squeezed the red tip of my stick and see the white blob rise, arc and fall. I expected euphoria.

But the keeper saved it.

At six years old, my first moments of International Soccer were akin to the first time you went to a football match. Sure, you’d seen the old game on the telly, but now you felt more involved, the engagement was palpable and you could whizz that glob of white pixels around the pitch in a way you never could in reality.

You see, International Soccer was the first game that I played on my own system. Sure, I’d seen a few daunting arcade machines in our local leisure centre and I have the vaguest memories of playing some sort of Space Invaders clone at my aunt’s work, but when I finally tore the wrapping paper my Commodore 64 Playful Intelligence pack, I knew I finally had my own window looking into video-game nirvana.

My beloved computer came with a 4-in-1 cart that included Fiendish Freddy’s Big Top O’ Fun, International Soccer, Flimbo’s Quest and Klax, in that order. When I plugged the cart in after hooking the console up, I went for the very first game, didn’t I?

Of course I didn’t – I went straight for International Soccer! 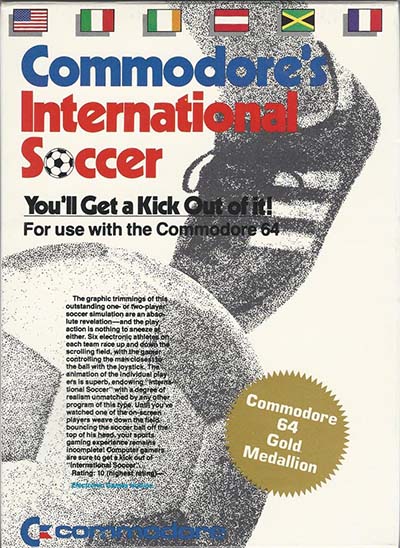 You see, football games have always been important. You buy a new console, you get a new football game. There’s a reason why Sega bundled World Cup Italia ’90 with Mega Games 1 and sent out hordes of Mega Drives with it included; it’s also the same reason why Sega had so many franchises, from the outstanding Worldwide Soccer and sumptuous Virtua Striker to the decidedly average International Victory Goal. It’s also one of the reasons why the Dreamcast failed as it was missing a certain football simulation series which continues to consistently sell millions. Even today, Pro Evolution Soccer is just about the only game Konami still develops, and even Nintendo sought to pack Super Soccer in with the Super Famicom Mini.

As I had mentioned, my experience with videogames of any sort by this point had been fairly stunted. Most of my interaction had been looking on as other people played on these magical machines, or craning my neck up to watch the looping attract modes of towering, imposing (at least to a child) arcade cabinets. Before I’d booted my first games system, I hadn’t even seen a football game before.

It was also around this time that my dad took me to my first football match and kindled my love for Spurs, England, and all things football – a flame that still burns brightly to this day.

So yes, being an impressionable kid and having already become smitten with the beautiful game – my father having drilled loyalty to Tottenham Hotspur into me – I went straight to International Soccer! To me, computer games and football was the perfect marriage, so I had little choice but to dive in two-footed. And I was absolutely awful at it. 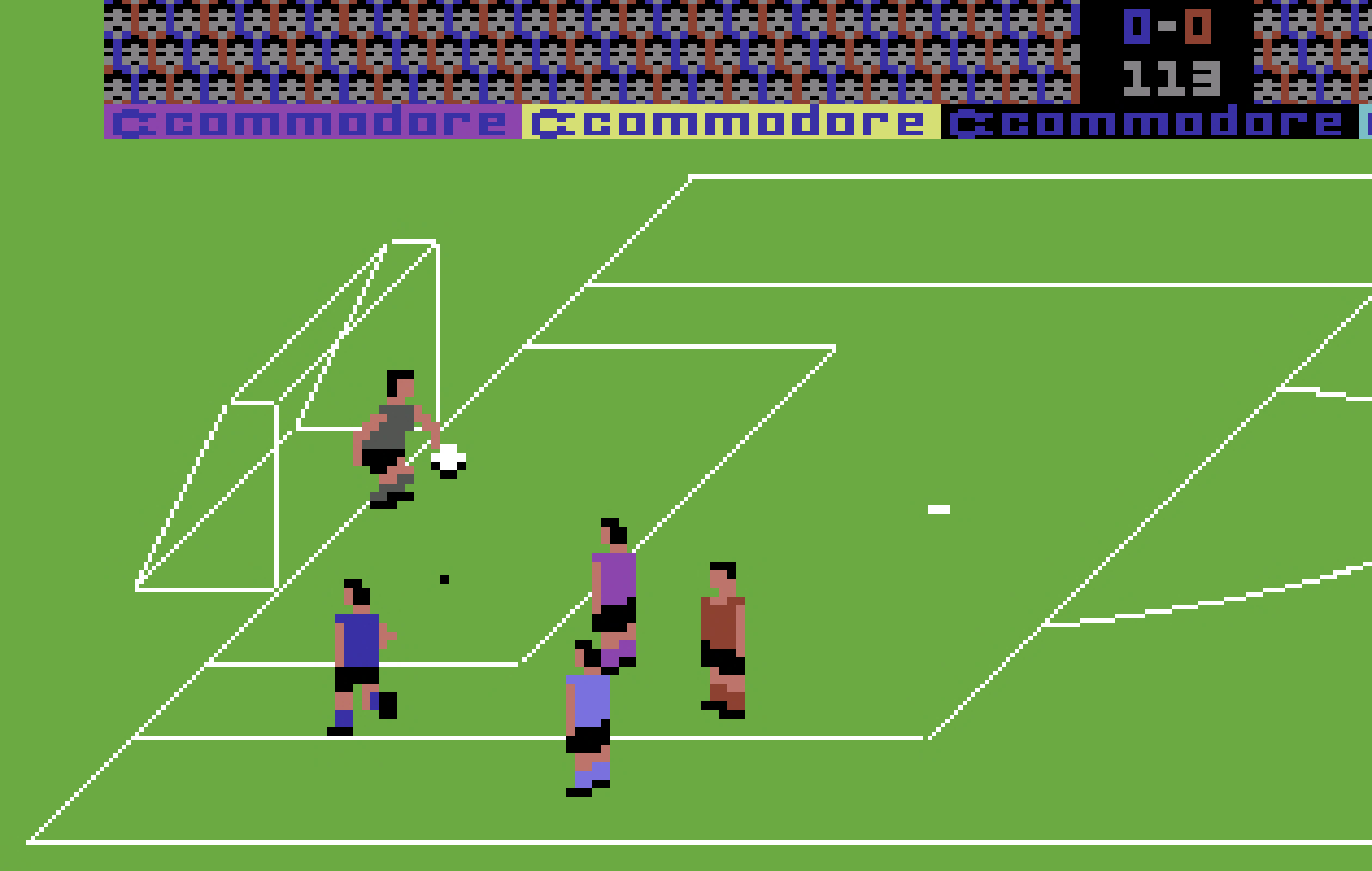 When the game first booted, there was a brief screen depicting the developer and publisher, then it cut straight to the difficulty and colour select, which presented itself as two identical players standing either side of a ball. By default, the game was set up for a human vs human game, and clearly six-year-old me was far too excited to meddle with the game options as I jumped straight in. So that initial burst forward on my part with a shot at goal described above? Yeah, that was done against a team standing still, immobilised by the lack of a second player. The final score: 0-0.

Despite my ineptitude, I was mesmerised by the game. Sure, by late 80s standards, it was very basic, but it was incredibly slick. Simple but effective is certainly how I would describe it.

To start with, there were no free kicks, no fouls, and no offside rule. You won the ball by walking into it, either by walking into a wayward pass from the opposing team or walking into one of the other players, then magically walking away with the ball. The ball, or the cluster of pixels that represented the ball, attached itself to the player’s legs like a friendly cat. The ball only came loose when another player stroked it (again, like a cat) or when it was kicked (please don’t kick cats).

You may have noticed that I mentioned walking as opposed to running. The game was decidedly pedestrian, and the only time there was ever a difference in speed was when a player was slowed down (even further) by being on the ball.

One fire button gave you a single type of kick to pass and shoot. It moved at the same speed and trajectory, regardless of context. These days, passes in football games seem to gravitate toward the target player, but not here. Therefore, passing required a modicum of skill. Players did make runs up the wings and in the centre, so you could flick a diagonal ball into their path and pray there wasn’t a defender hiding off screen. 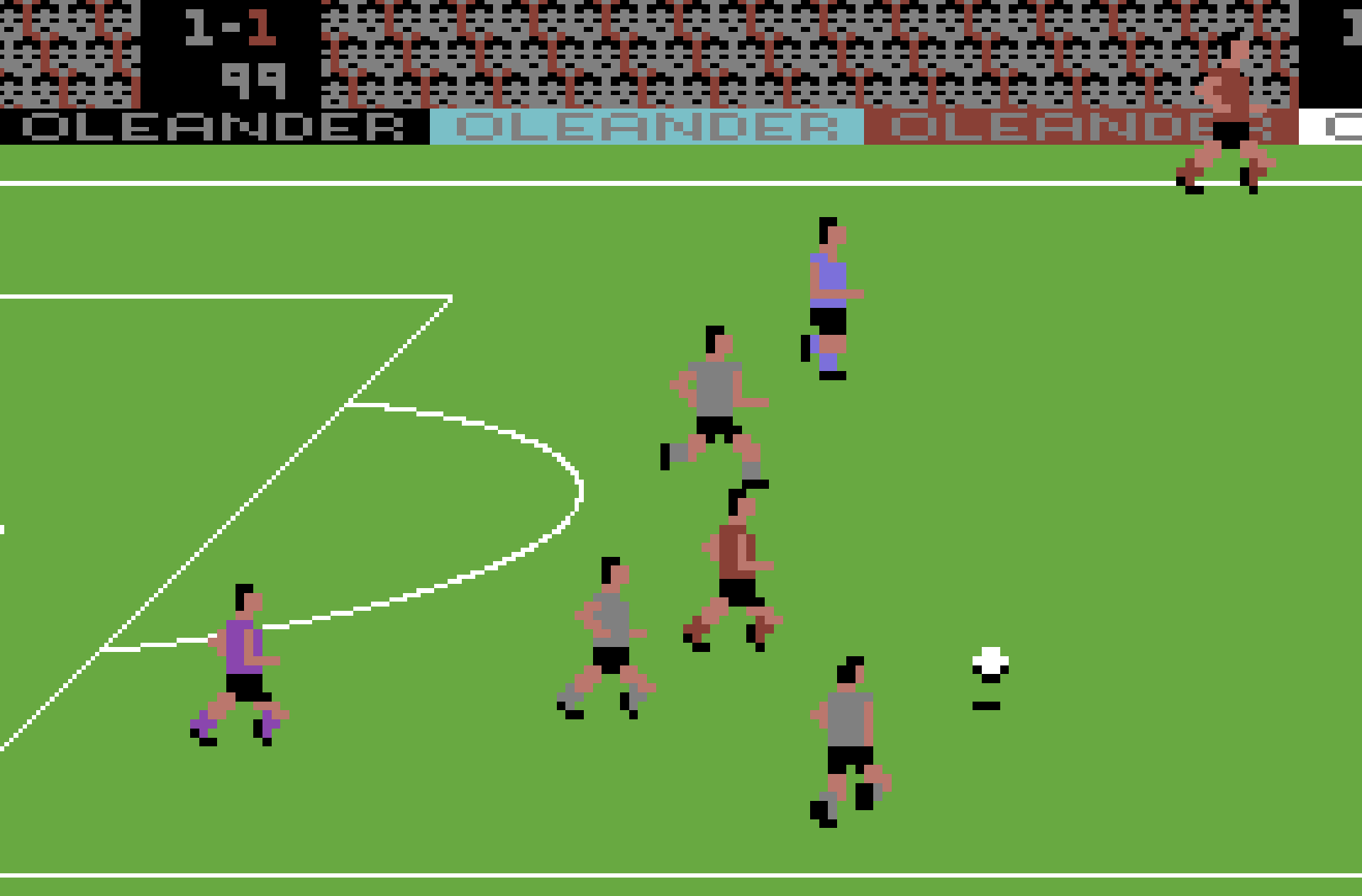 It soon became easier just to dribble through, especially on the lower difficulties. I once read someone describe Virtua Striker 2 as a beat-em-up with goalies as the bosses, and that was also true of International Soccer. The whole tactic of just walking into other players to win the ball meant the game was always played with players standing, and their engagement with one another was a kind of wordless joust – a gentlemanly duel performed in the blink of an eye, and with utmost secrecy.

Defeat the outfield players and the boss presented himself, capable of diving, of all things! Keepers couldn’t catch the ball, though, so saves were literally just deflections allowing you another shot, should you be quick enough – like multiple hit points.

Despite the aforementioned drawbacks, International Soccer played an enthralling game of footy that, despite being the same age as me when I first booted it up, was perfectly playable and bags of fun. The developer seemed to know what he wanted to do within the limits of the machine, and made it fun with its fluidity.

Fluidity came at the cost of visual flare. Simplicity was once again the theme here with big, bright, blocky graphics. They were fine and charming in their own way, so long you didn’t dwell on the details. There was no referee, no goal net and no dugout – which wasn’t a problem since there were no substitutions in the game. 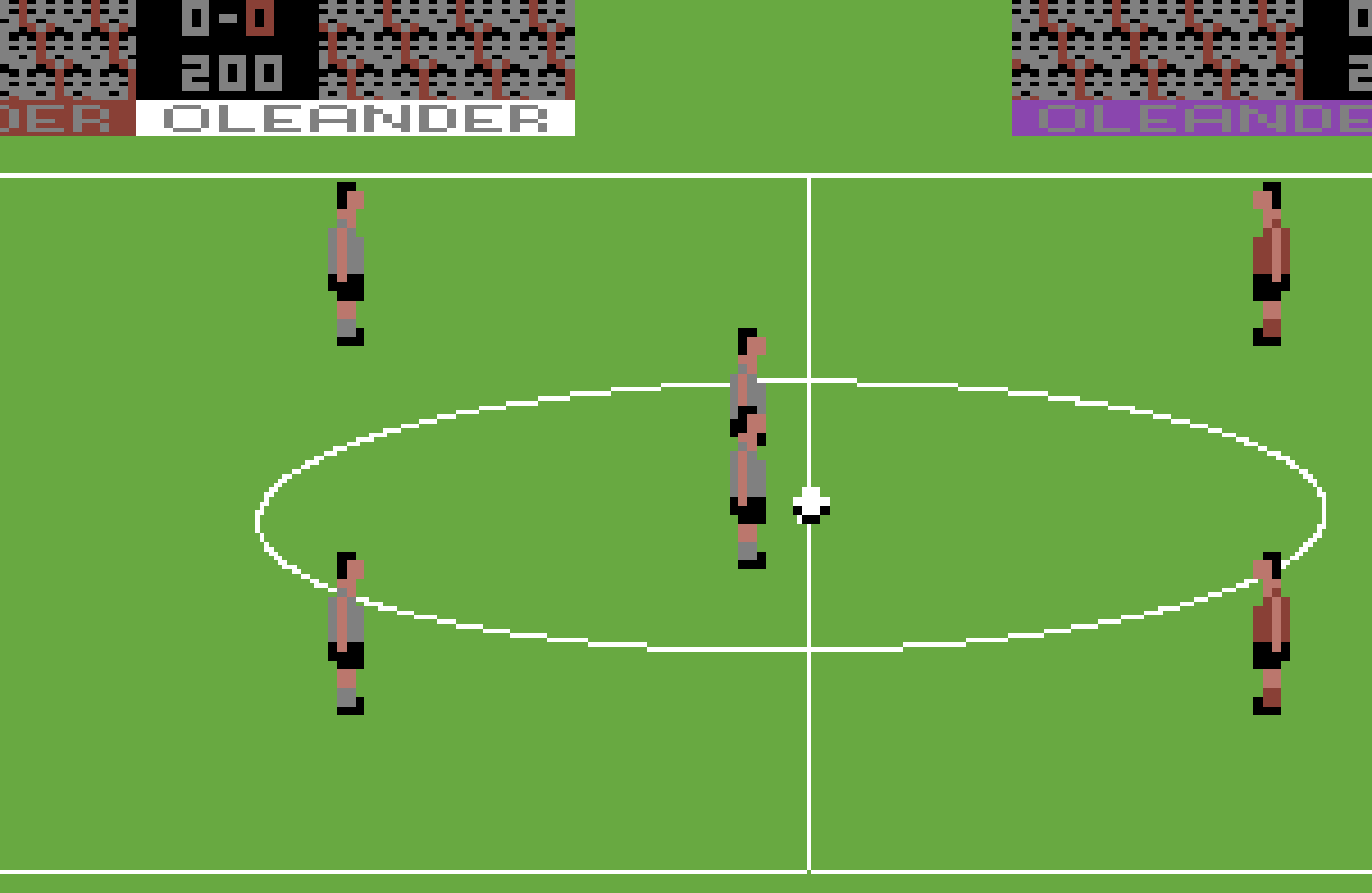 Look a bit closer and things got a bit creepier. It was nice that the crowd represents the colours of the teams playing and they were all interspersed, which meant rival fans were sitting together, mostly silent, in an era where football hooliganism was rife and such crowd mixing would likely have resulted in several broken beer bottles and a series of amateur surgical operations using Stanley knives.

But those faces, though… that crowd of disembodied grey heads stared out past the game, out of the screen and deep into your soul, is more than a little unsettling. So too were the expressionless player faces when selecting your colours and difficulty, mouths straight and eyeballs flesh-coloured and vacant, as if these were not men but prototypes of android replicants – Bicentennial Man without the emotion.

Suddenly, the whole thing started to feel extremely weird, matches were played in eerie silence, officiated by an invisible force. When a goal was scored, the crowd waited for the whistle and only then erupted. But soon you became aware that it isn’t a cheer at all, and that cacophony was just white noise as the floating grey expressionless heads in the crowd shake and somehow morph into the King of Hearts. 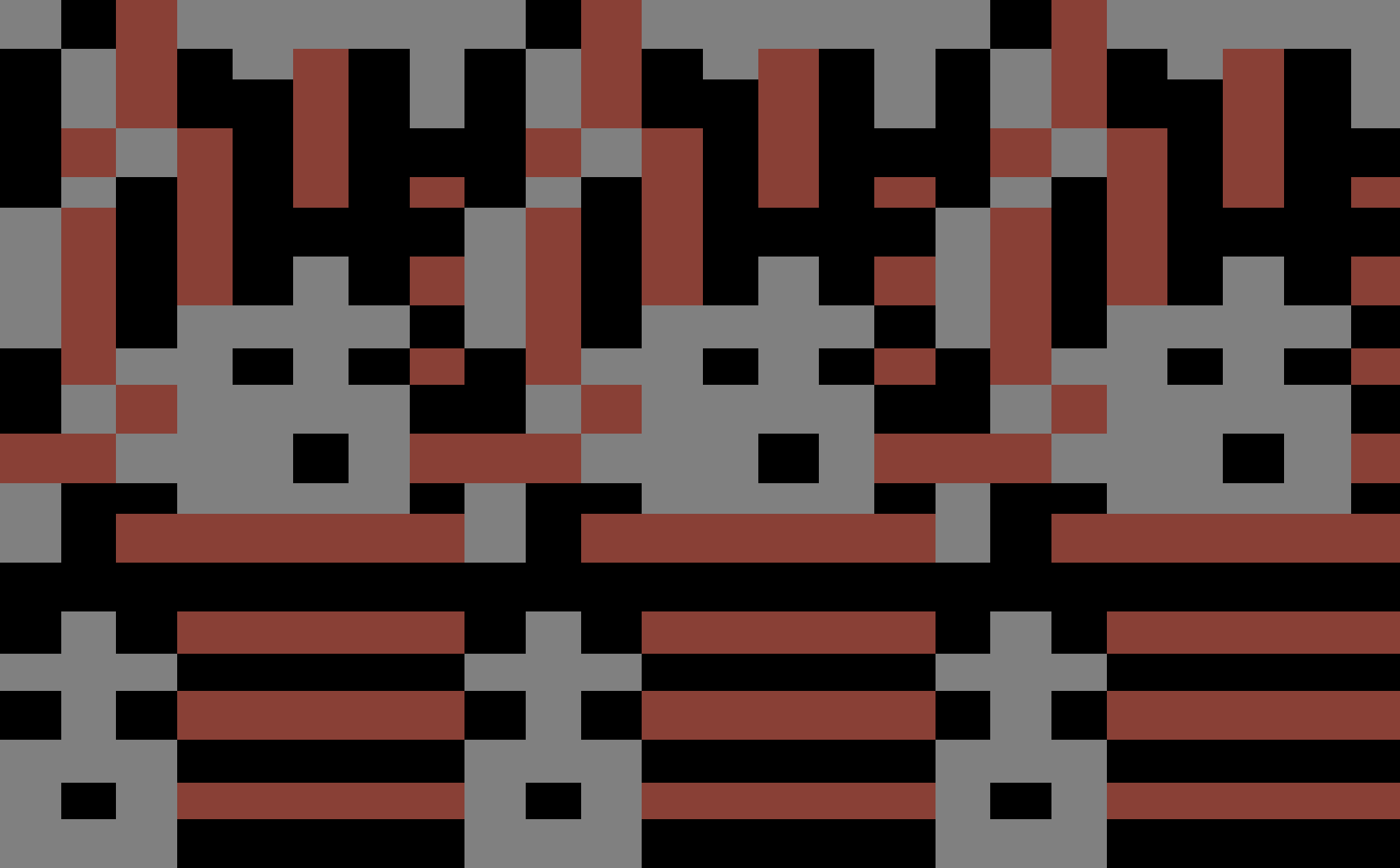 But as I say, it’s best not to dwell on those uneasy details. They’re the sort of design decisions that were made with the limitations of the hardware in mind. So, when the faceless lady in the dress stepped onto the pitch at full time to present the trophy with all the emotion of a mannequin, know that her lack of features was down to the restrictions of the Commodore 64’s memory. 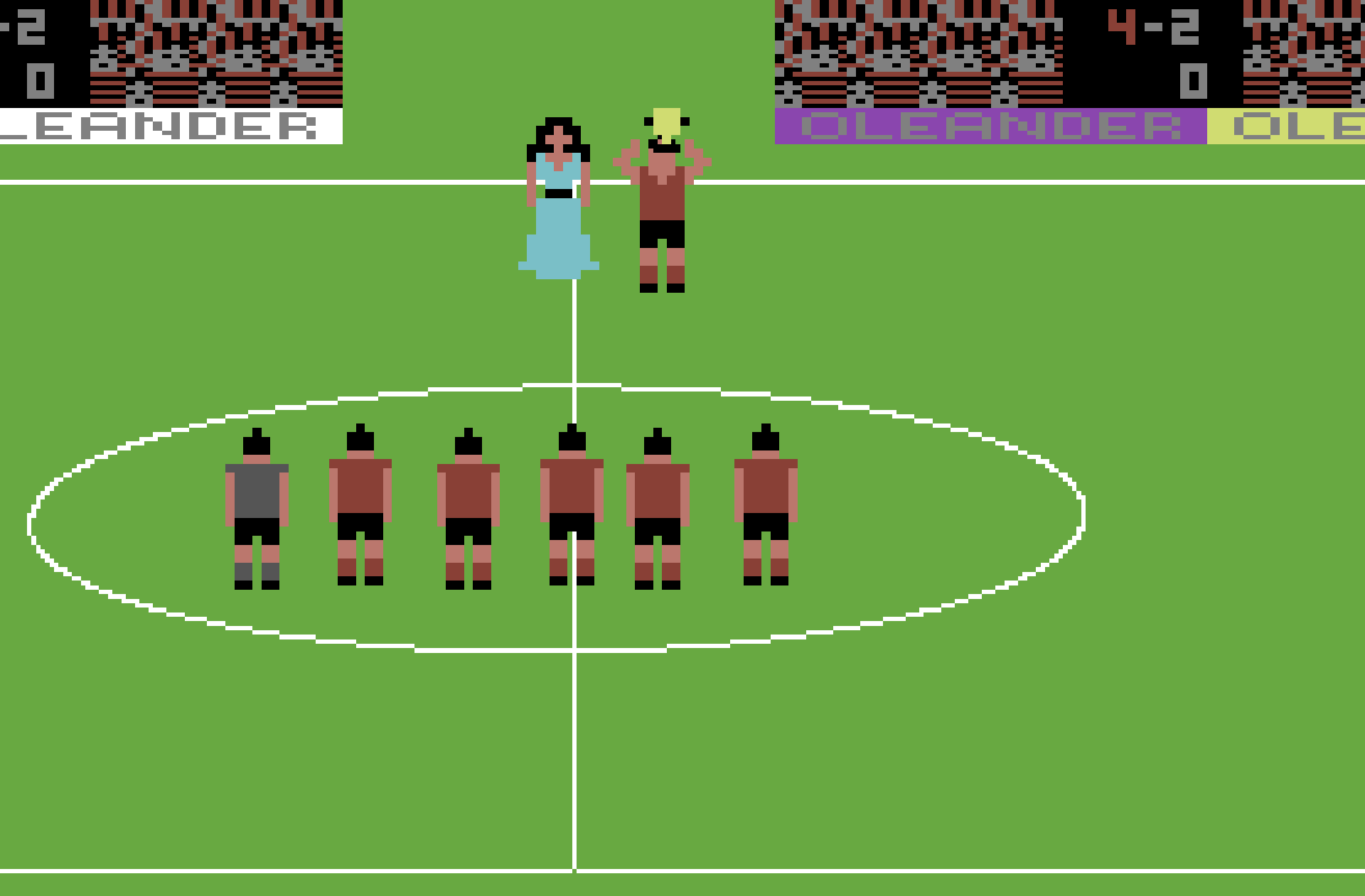 International Soccer is still fun to play today. What it does, it does well enough. In a sense, its mechanics haven’t really aged; it’s still responsive to play. It’s just that in an era where games have thousands of player likenesses, require at least eight buttons to play and include every rule in the real game, International Soccer really does feel like a relic of a bygone time. A time of only 16 colours, single-button controllers, when most of your games took hours to load from tape and when all this were fields.

It’s arguably not even the greatest football game on the system, with my preference eventually moving to Microprose Soccer while Emlyn Hughes International Soccer came later and played mostly the same, but with far more features. 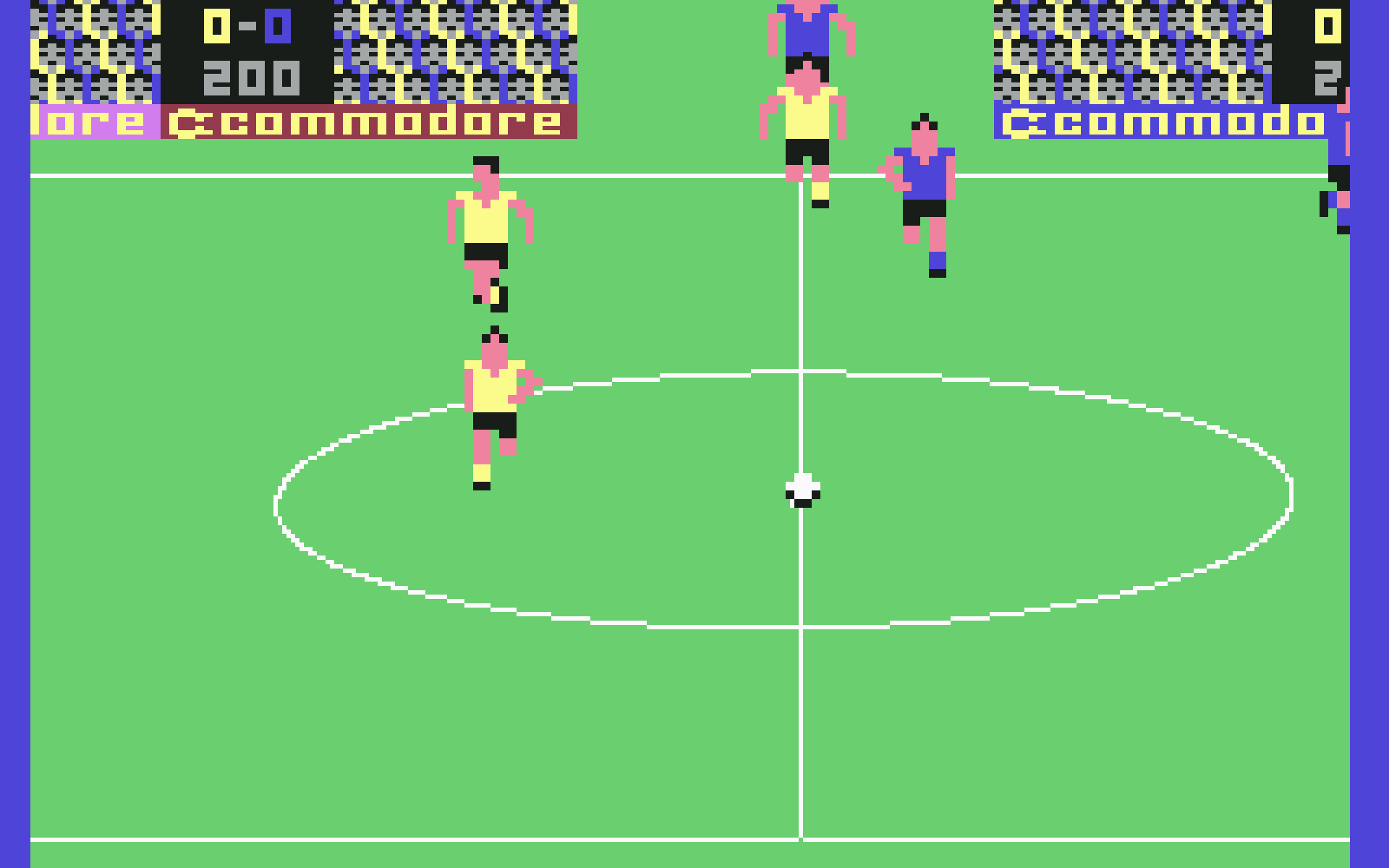 But while those games may have aged a little worse owing to their complexity, International Soccer remains a simple but enjoyable game of footy with a lot of nostalgia value for those who were there. And if you weren’t, if you ever get a spare ten minutes for two 200-second halves and have an opportunity to give the game a go, you probably should – you may be pleasantly surprised.

Just don’t stare at that crowd for too long… 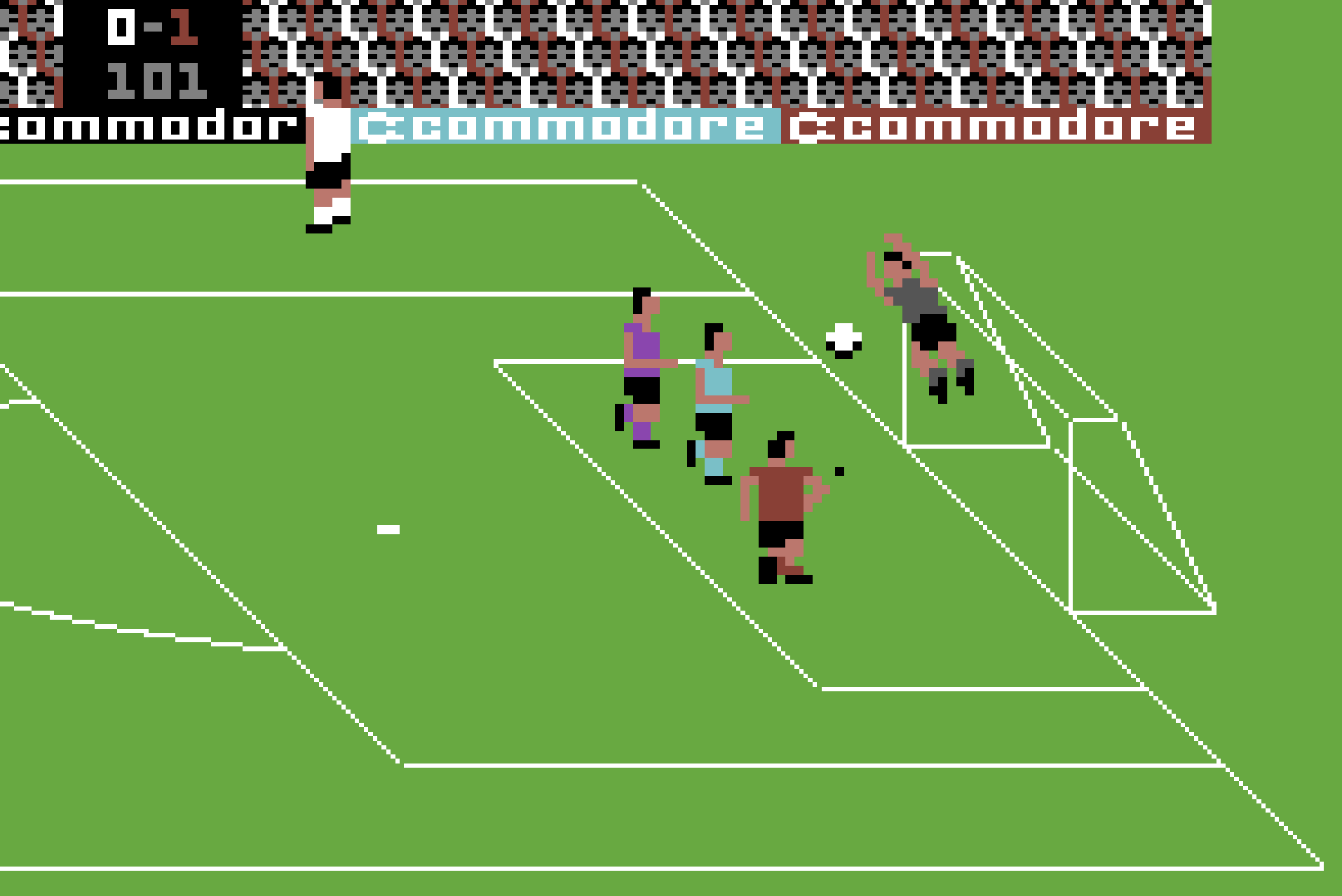 A slice of gaming history, this classic may have taken home the Golden Boot back in its day. Three decades on, it’s a legend giving a speech at half time about the good old days, so stay and listen rather than rushing in to join the queue for a Balti pie.