A deeper search of the net will turn up details of Creatures II: Torture Trouble, a 1992 release for the Commodore 64 from Apex Computer Productions. Despite never having owned a C64 myself, I still believe it to be the greatest gaming experience of my life, and a big influence on my choice of media outside of gaming. 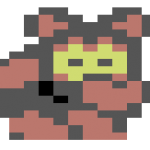 I played the game relentlessly at my friend’s house, in the same town as me. His gran would make us weak teas and serve them with freshly baked cherry scones while the games loaded from not one, but two, tapes, which meant constant checking of when the deck needed reloading.  After what felt like a lifetime, the day was ours with a “three lives each” rule to ensure fair play, and we’d slowly learn the intricacies needed to beat this game.

Later in life, while wasting my days at a university course I was destined to fail at, I would again lose days to this game, playing it on an emulator. It was here where the full brilliance of the game would inspire me to actually leave the course I was flunking and reapply to a different university to study Computer Entertainment Technology. 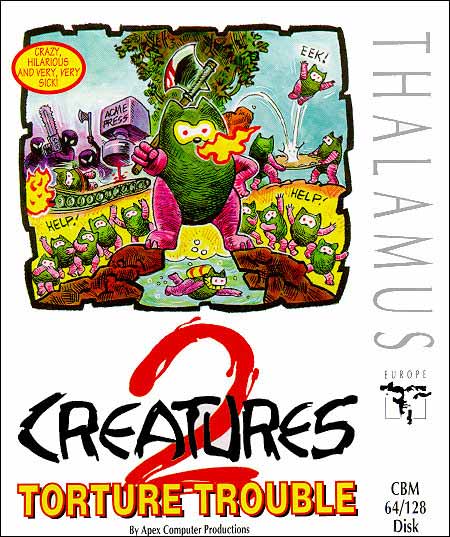 All creatures great and small

Unsurprisingly, Creatures II is the sequel to Creatures, a 1990 side-scrolling platformer with the awful backronym Clyde Radcliffe Exterminates All the Unfriendly Repulsive Earth-ridden Slime, which not only gets its T from the word “the” – something generally ignored in acronyms – but also hyphenates “Earth-ridden”, when other E words would have sufficed. Both games were developed by brothers John and Steve Rowlands, with John coding and Steve composing the music and animating the graphics.

The premise of the first Creatures was that a group of cute aliens called Blotians had to evacuate their planet and found a new home on a tiny island on Earth. Renaming their species “Fuzzy Wuzzies”, because they were fuzzy and not because they were mildly racist Dad’s Army references, they built a city and named the island “The Hippest Place in the Known Universe”.

The demons that lived on the other side of the island hated the good nature of the Fuzzy Wuzzies, so invited them to a party, threw a net over them then locked them up in torture chambers. Only Clyde Radcliffe hadn’t been locked up, as he was passed out drunk in a bush and woke up with halitosis so bad he could breathe fire. This was a bit more interesting to me than the standard rescue princess/save planet scenarios.

So in the first Creatures, Clyde embarked on a platforming adventure with solid gameplay, great graphics, a funky electro soundtrack with more earworms than Star Trek II: The Wrath of Khan, and a punishing difficulty.

Interspersed throughout the normal levels were “torture screens” – a whole level contained on a single screen where Clyde needed to battle against time to save a fellow Fuzzy from a brutally depicted death delivered by a contraption Wile E Coyote would have been proud of. They even wrote ACME on some of the devices. 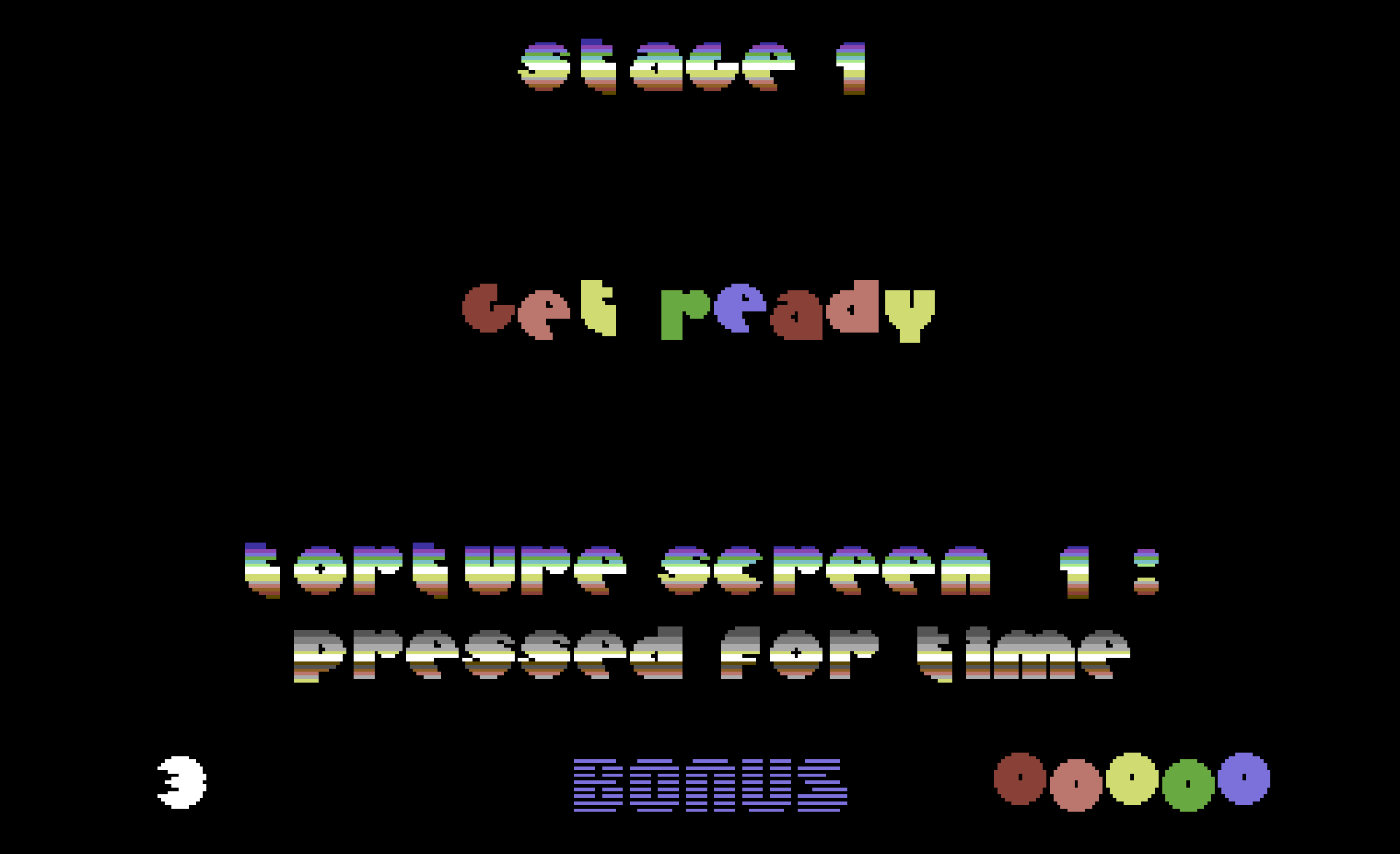 Fail to save the day and there was more blood than at a homecoming prom written by Stephen King.  These screens were the highlight of the game for our eight-year-old minds (with the large-chested, scantily-clad witch who sold you weapon upgrades coming a close second), and matched a predisposition to over-the-top violence reflected in our choice of comic books; they made the rest of the platform levels between them somewhat of a chore.

Doing it for the kids

Thankfully, Creatures II did away with the regular side-scrolling for more torture screens and introduced new gameplay levels that were surprisingly varied, which kept the action coming in short bursts of action. This time, it wasn’t just members of your species you had to rescue. The demons had taken your kids, and in the two years since the last game, you’d produced dozens of the cute little buggers.

The torture screens were even more violent and kept up the platform-puzzler element of the first game. Trial and error took up my precious lives; each time I faced a new scenario, it’d force me to hand the joystick back to the game’s actual owner.

The first level alone had us jump across sinking platforms, avoiding the fireballs while returning fire, pushing a bomb, lighting it and blowing up a structure, returning across the platforms, dropping down to kill the two enemies firing on different levels, dropping through the hole and firing at the switch to release the bicycle powering the conveyer belt that was sending your child to a vertical press, before jumping over the now-moving bike. 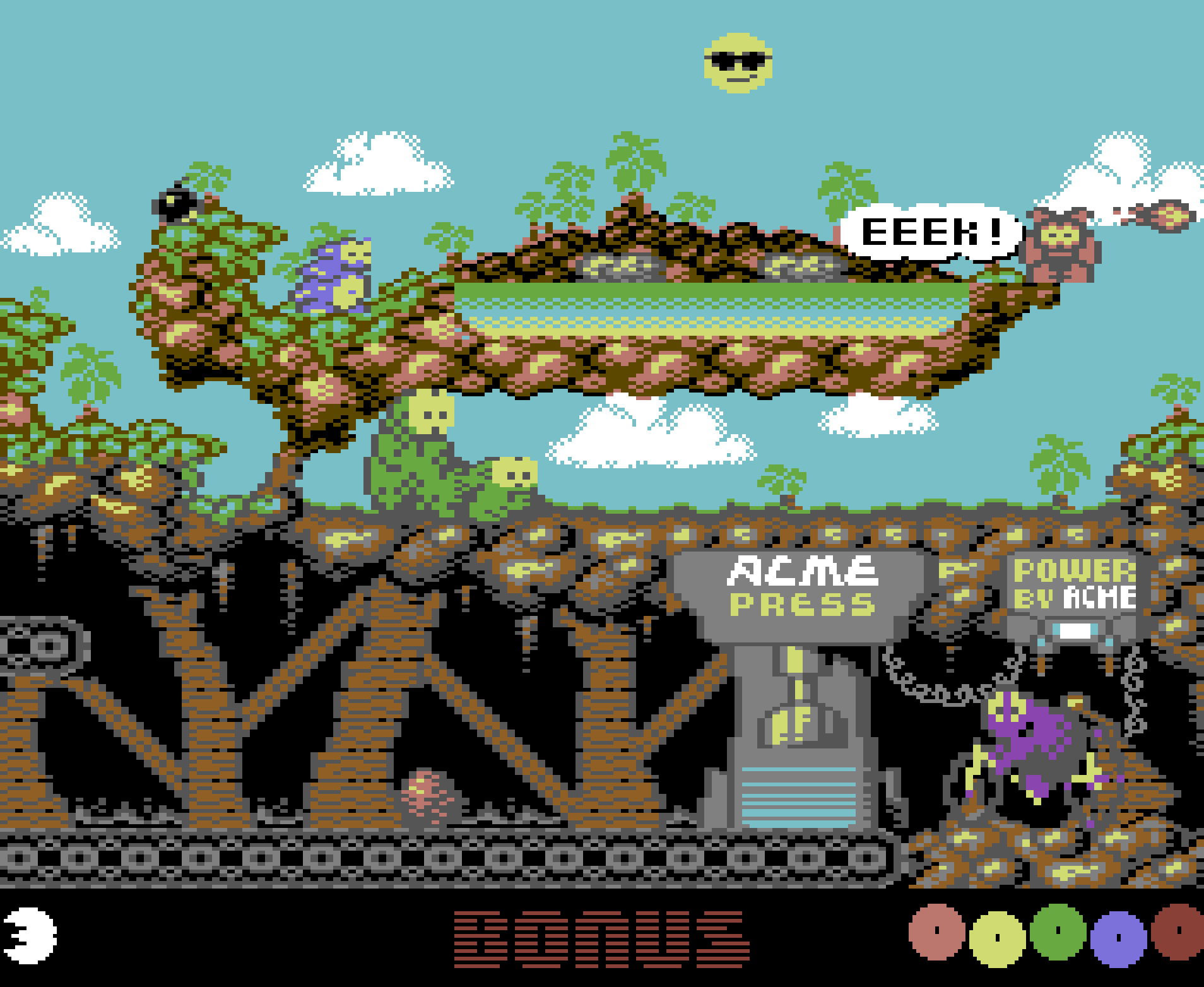 Variety is the spice of life

After each torture screen were the interlude levels, where monsters would throw your kids off a cliff and you had to guide Clyde and one of his kids to tilt a stretcher to bounce the plummeting siblings across a ravine, collecting bonuses if you had the guts to go for extra points. Drop a kid and the stretcher bearers donned medical hats and carried the bloody corpse off screen.

After two torture screens and two interludes came a boss fight, where you had to take on not one but three demons. Here, green round creatures supplied from a Bug-o-matic needed to be kicked into pipes, setting which vertical level they would come out of. All the while, you avoided the attacks of the bosses who increased in size with each round. The final demon complained how you’d just killed its kids, despite their efforts to do the same to yours. 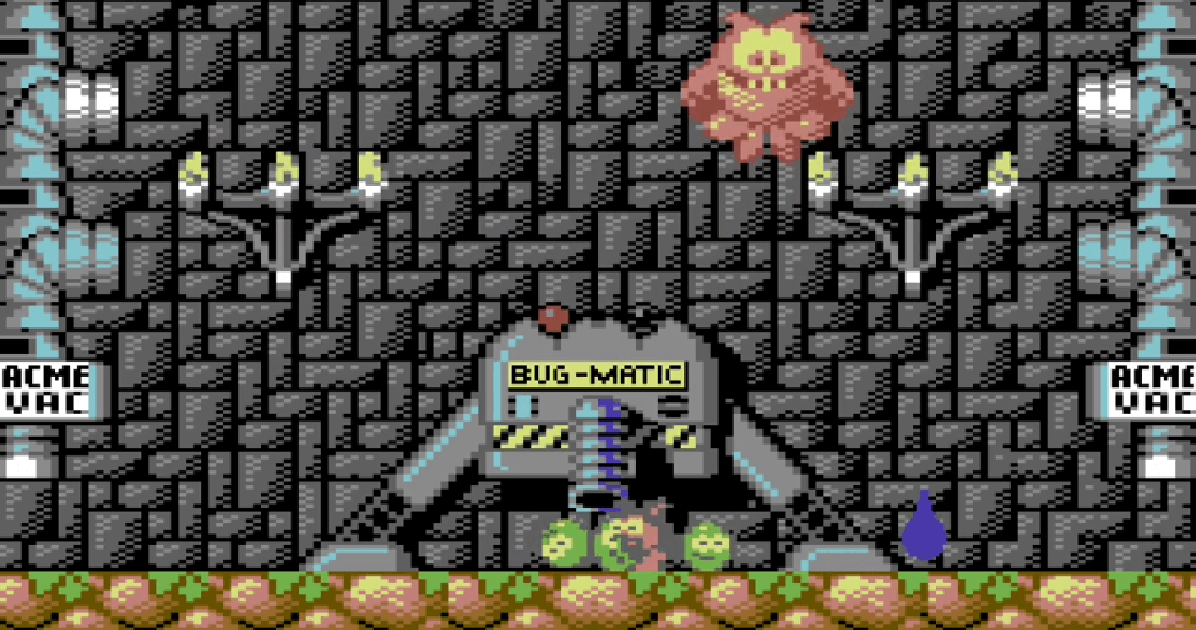 Finally, the island-hopping levels have Clyde take his now-rescued sprogs from island to island on his back, avoiding aquatic and avian-themed enemies while wearing a diving helmet.

Modern attempts at pixelated graphics make the characters look flat and expressionless. Yes, games like Fez, Nidhogg and Shovel Knight are beautiful, but the characters show no emotion. Yet in Creatures II, when the crocodile on the second torture screen nearly snaps at your kid’s feet, you can see the fear in your furry offspring’s eyes. If you were too slow, the croc bit your kid’s lower half off, showering blood and exposing a glimpse of spinal column with absolute agony expressed in the remaining torso before it slumped lifelessly. Successfully dropping a rock onto the head of the creep raising the croc’s water level rewarded you with a slight pause before the snow under his feet slowly seeped red from his crushed form.

On another level, your kids get poked out of a cage above a pool of acid at regular intervals, while a boatman keeps the same horizontal position as you.  If the boatman doesn’t catch your kid, they disappear under the green bubbling surface before bursting back out as a skeleton that perfectly crumbles into individual bones.

My friend had been drawn to games with weird titles such as Sheep in Space and Attack of the Mutant Camels, but these games were all silly name and no polish. This shit, however, was beautiful, violent and very, very funny.  The glee the Simpson kids took from watching Itchy and Scratchy was nothing compared to being able to carry out the cartoon violence yourself. It was a dream come true for a ten-year-old that drew his own cartoon death machines. 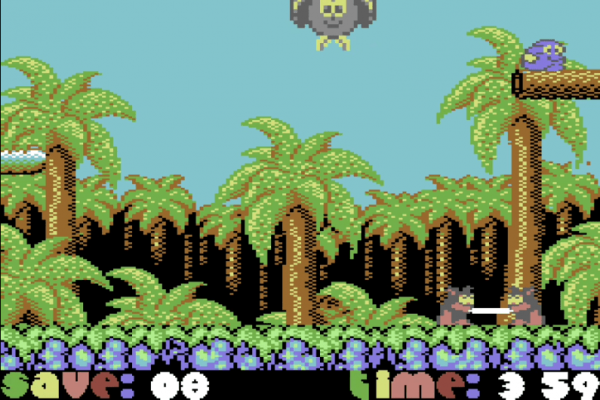 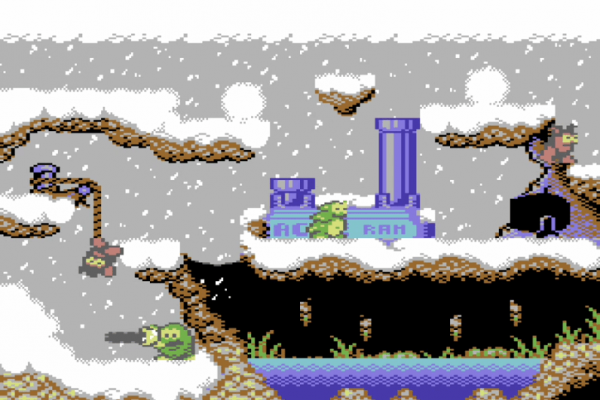 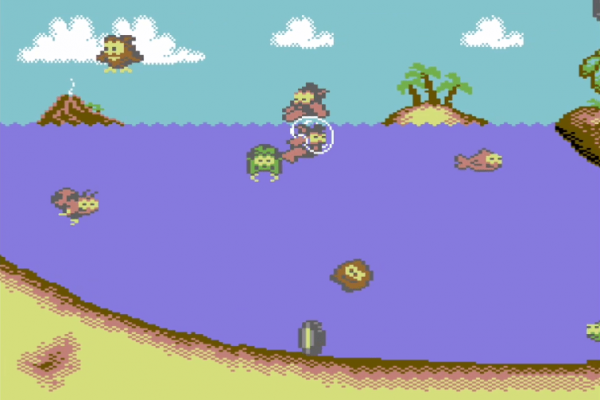 I’m now 35 and the last time I finished Creatures II (I never just play it now – I finish it) was ten years ago, but just writing this article had me whistling the theme tunes for the snow levels, boss fights and interludes from memory. Steve Rowlands could give Daft Punk a run for their money on catchy electronica, and the fact there are YouTube videos of the music for this game is testament to this. It built nicely, and beats dropped like the enemies do after Clyde’s fireballs. The pacing of each track matched the level being played with frantic energy, from fast-paced boss fights, to the slower, more methodical melodies when you had to keep calm while bouncing kids to safety in the interludes.

Yes, the sound is tinny and one dimensional – it’s being processed by something less powerful than the CPU in most modern toasters – but it’s not all about power, it’s what you do with it. Mr Rowlands started the island-hopping theme with one single melody, but this soon built to multiple tracks getting faster and faster, coinciding with the fact you would be dodging more enemies and watching multiple kids on the various islands to see if enemies were going to kill them with one touch. Modern games use complex algorithms to calculate what music should play and when; Creatures II used good solid design. 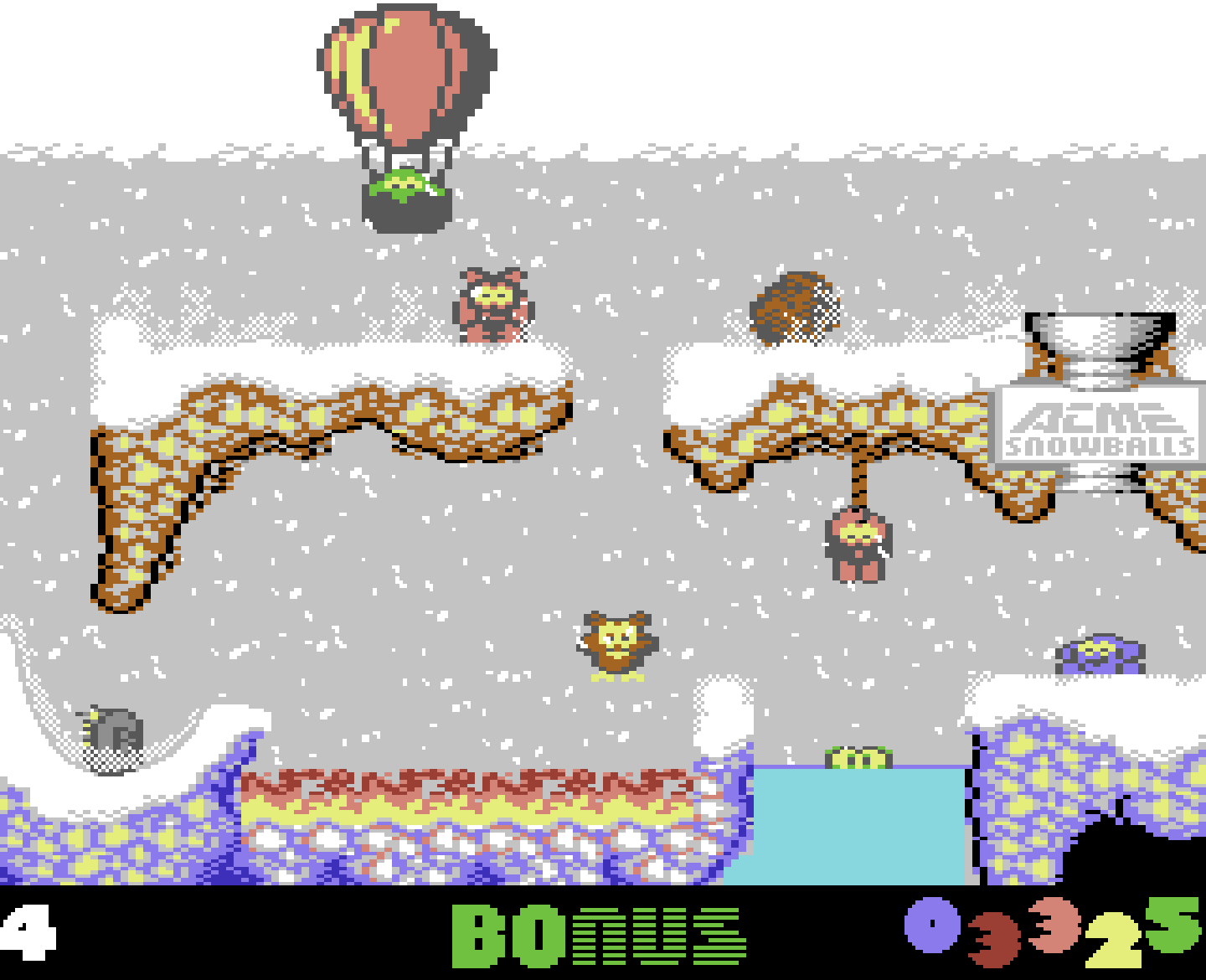 This game is hard – hard enough that I’d completed it dozens of times on an emulator with infinite lives before even attempting it without a cheat. The activation code to this cheat was hinted at on the Commy original by the fact that KFC’s slogan at the time was used in the loading screen to describe the game as “Finger lickin’ good”.

You had to move the joystick to port 2, wet a digit then rub port 1, which made an image of Maximus Mouse (from Thalamus games Summer Camp and Winter Camp), wave his arms until a fountain of glowing Fuzzy Wuzzies spurted across the screen. I’ve told people about this cheat and they haven’t believed me. Thankfully, in later years the emulators I played the game on had a simple Y/N question for the same result, and no more moist finger stimulation was required.

Even with infinite lives, it could take an hour or so to get past a tricky level between two of us at my friend’s house. I was always better at the interlude levels and my mate was better at the boss fights, but playing it over and over on various PCs s since, I’ve completed the game so many times that I’m finally pretty decent on every stage – and they’re all fun.

Zzap!64 gave this game 97% and 24 years later, this rating still holds true. Zzap!64 did own Thalamus, the publisher of the game, so it was a very biased review, but I still enjoy cartoon violence more than I probably should – so I guess this review is too.

Creatures II is beautiful, twisted fun. The violence is so over the top that it’s no longer offensive, and is piled onto something which is actually fun to play.