By James Dawson November 2017 No Comments

That was the first word I ever heard spoken by a real-life computer, and it blew me away. It was the early 90’s, I was a primary-school boy with a pudding-bowl haircut, and a computer had just talked to me. Flight of the Navigator was coming true.

A few months later, a friend would get a new console called a Mega Drive, and I’d hear the now infamous “SAAYYYYYY-GAAAAAAA” that took up more memory than the rest of the Sonic the Hedgehog cartridge put together, but my first memory of being spoken to by an interactive device will always be a crackly, low-fidelity recreation of Peter Weller.

I’d buy that for a dollar my son

My parents bought me The Hollywood Collection for my disk drive-powered Amstrad 6128, and yes, you did have to spell it with a K. This offered three great games and one stinker over two disks, with a game on each side of a disk. Ocean Software had recreated the plot of four classic movies, with the aforementioned Judge Dredd-inspired, Paul Verhoeven-directed tin policeman being one, and the others comprising Batman: The Movie, Ghostbusters II, and Indiana Jones and the Last Crusade.

I could happily write about all of these games, apart from Ghostbusters II – I never managed to finish the first bloody level, as my eight-year-old self couldn’t work out the slime-collecting mechanic at the bottom of the sewer shaft. I’ve since found out that this game was developed by the Oliver Twins of Dizzy fame, so maybe I had to do several fetch quests before scooping up pink gloop, but I digress. 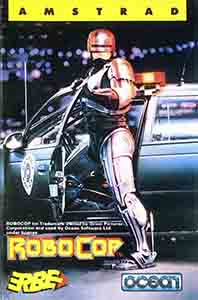 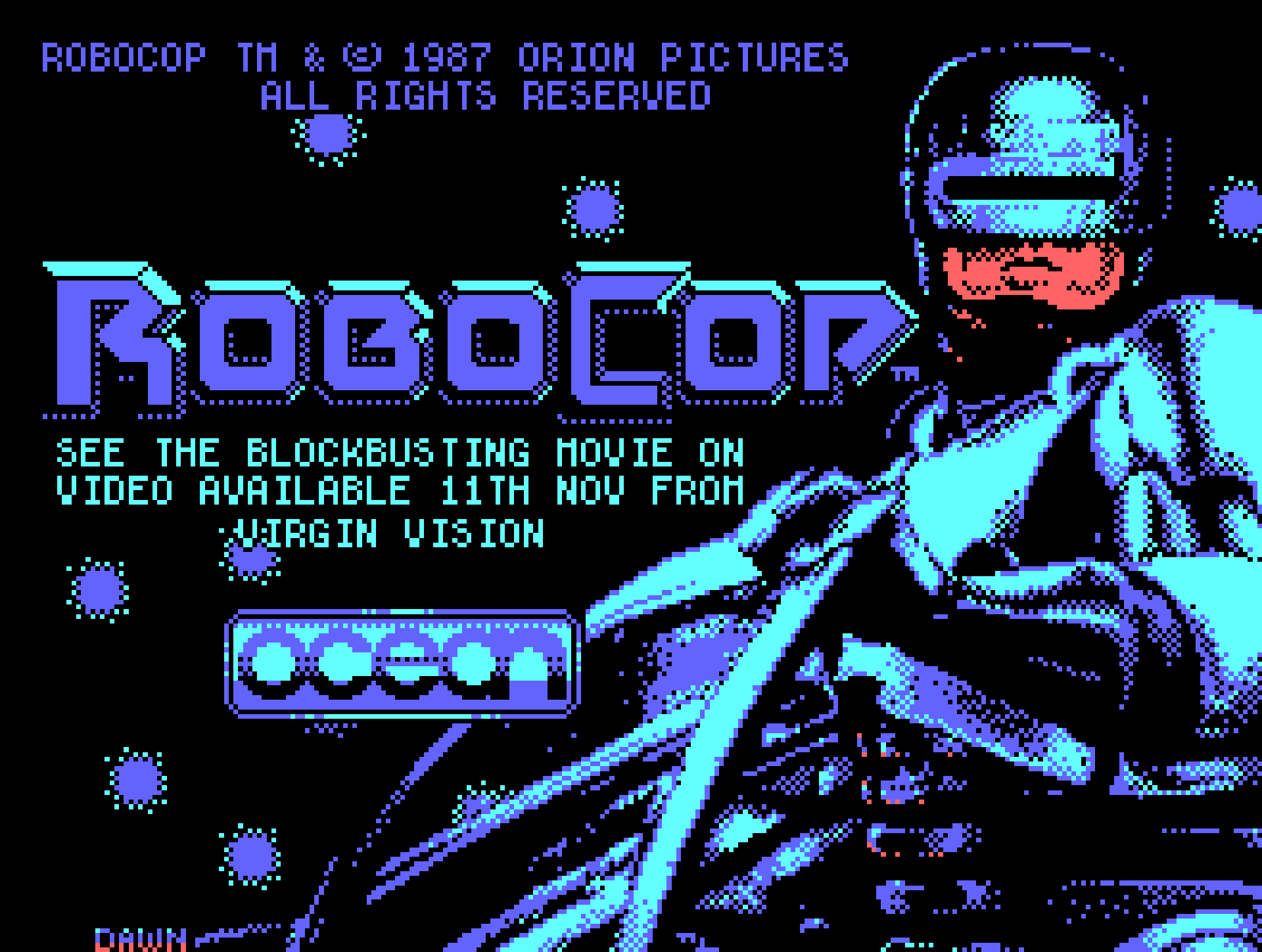 I’d seen all of the other films in the collection and thought they were amazing, but for some strange reason my parents wouldn’t let me watch the thrilling tale of Alex Murphy being rebuilt as a justice-dispensing cyborg, especially the bit where the dude got melted by acid then the car made him explode, which got cut every time it was shown on ITV. I wasn’t allowed to watch the film, but I was allowed to enact out its plot in full via a pixelated interpretation. This meant the game was sometimes… confusing.

You down with OCP (yeah you know me)

The first (and majority) of the game’s levels were a side-scrolling, run ‘n’ gun shooter: RoboCop on foot, slow and steady. His walk animation cycle consisted of his top half refusing any vertical movement, while his legs looked they were peddling an invisible bicycle. In fact, his top half was a completely independent unit capable of shooting horizontally, vertically or diagonally at a 45-degree angle while the legs would peddle away with barely any synching to the floor, resulting in a kind of forwards moonwalk that really gave the impression the protagonist was more machine than man, striving forwards, unstoppable.

Unless, that is, you got hit by anything, at which point officer Murphy would freeze up in a pose that I was reminded of when the current POTUS impersonated a disabled reporter on his campaign trail. 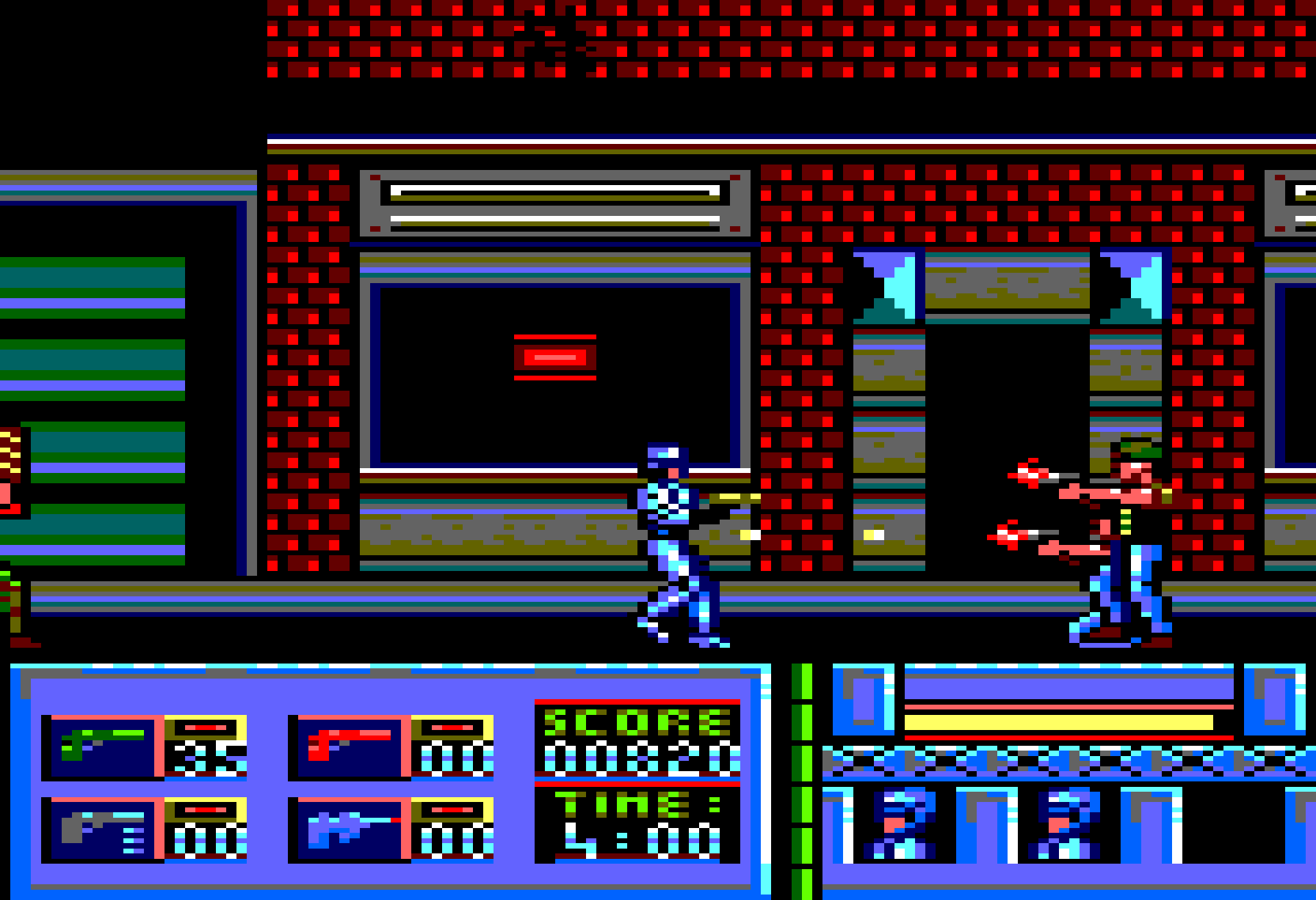 You were also able to duck, which involved going down on one knee. This was an extremely useful tactic against the kung fu enemies, who would flying-kick over your head, despite the fact you had ducked as soon as they appeared ten seconds earlier. It was also the tactic needed to beat the ED-209 boss, which would fire bursts of gunfire over your head after Dick Jones activated Directive 4 and disarmed you during your attempt to arrest him at his desk.

None of this was explained in the game, however, so I just knew this bit as when RoboCop had to do a silly pose near the man at the desk, before punching the Dreadnought from Warhammer 40,000’s Space Crusade.

Other enemy characters included wave after wave of beret-wearing gang members, chainsaw-wielding, non-beret-wearing gang members, and the motorcycle-riding bikers who were near unbeatable without a powered up weapon, yet exploded fantastically if you did take them out.  There was a two-second delay of a fire effect, before the wheels would go flying across the screen in opposite directions.

All enemies spawned from exactly the same place each time, so after enough playthroughs you would be crouched and firing at a biker before he was even there, so that the first shot met him just as he appeared on screen. This prior knowledge was needed, though, as you only had three lives to complete the entire game, and one mistake at the wrong time could quickly spiral into a full loss of health. Health could be replenished by peach-coloured jars, which I’d later learn were baby food.

Can you fly, Bobby?

An unsuspected enemy that I was forced to face in the game was gravity. Later levels involved going up lifts or stairs, meaning you had to hold the joystick in one of the upward diagonal positions and hope that the pixels would connect so that your hero could start his ascent. RoboCop would quite often miss the first step, and you’d take more damage as enemies spawned in this scenario more than any other, as you walked back and forth at the base of a stairwell frantically trying to start climbing.

If you did get on the first step, or have the game recognise you were in a lift, you’d start to climb so slowly that Dame Thora Hird would be able to overtake you, even without the aid of the stairlifts she became the face of. Stopping to shoot an attacking thug would mean you had to stop and once again find that magic joystick angle to continue on.

RoboCop started each level with a reasonable amount of standard ammo, but you couldn’t get giddy. Waste it all and you could only perform the punch manoeuvre that he carried out while practically overlapping an enemy. Yes, it was powerful and could take out ED 209 in just a few smacks, but it wasn’t going to reach the standard beret wearers that fired down slow-moving white lines that represented gunfire from above.

You could pick up other ammo, though, such as the power bullets that passed through all enemies on screen but had a slower rate of fire, or the three-way bullets that came out at a more acute angle than the 45 degrees of your usual aiming paths, meaning you could take out enemies who couldn’t fire back at that angle. You could also pick up the Cobra assault cannon. This behemoth of a gun fired out a glowing orb of death that was around ten times the diameter of the barrel it came from, and killed all enemies in one hit, including the bikers. When you knew the level you got these bad boys on well enough, you could take out the second ED-209 with your last round before entering the OCP boardroom.

Two of the levels were hostage rescues, played out through RoboCop’s visual hub in the 1st person view, and you had to move a cursor over the hostage-taker and blast away without shooting the hostage they’d taken. The final level was one of these, with Dick Jones holding the OCP chairman – the Old Man – hostage, while Dick was shooting at you. I was quite good at it because of loads of practice on the pistol shoot in Daley Thompson’s Supertest. 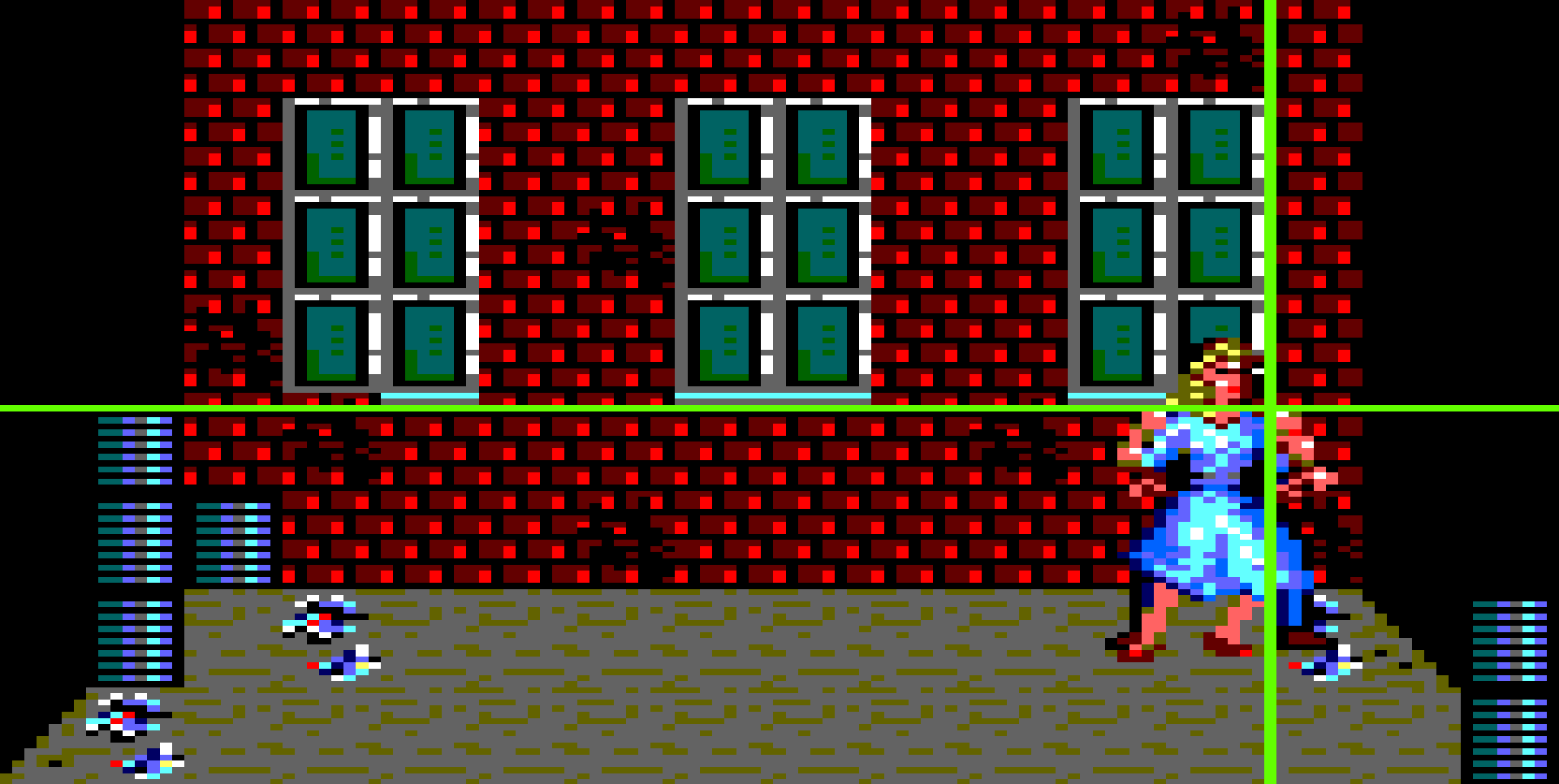 The first of these marksmanship levels made the biggest impression on me, however, and involved a punk holding a woman at knife point. A boy at school called Richard had older brothers who had shown him the actual film, and he had held court explaining to a group of us that in the movie, RoboCop shoots through the woman’s skirt and blows the attacker’s genitals off.  This is a fascinating tale to a nine-year-old, and I attempted take out the enemy by aiming through the lady’s clothing and castrating the punk, but failed because his crotch is animated higher than his hostage’s waist.

Hey… take a look at my face, Dick! He was trying to kill me!

The other level that varied from the norm was a time-based face-matching game to identify a dead criminal using a police computer. It started by asking you to “Identify disceased [sic] using police department computer”, then presenting a face to you on a blue screen. You had to scroll though matching parts of the face on the other side of the screen and click fire to select the one that matched.  Several face parts looked very similar and it was actually quite tricky with a short window of time before you failed for not being able to tell two near-identical beards apart. 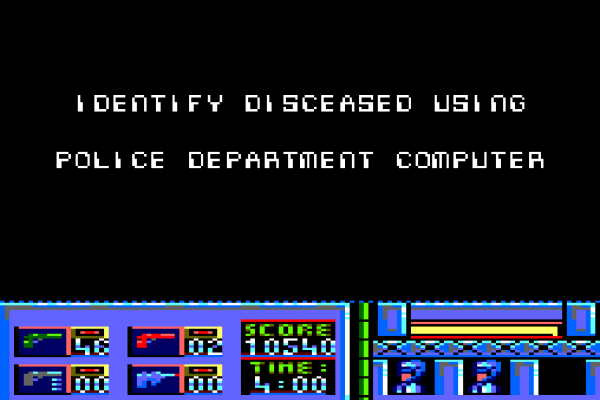 As well as shouting out his character’s name, there were many more words spoken by Mr Weller in RoboCop. Yes, it sounded like he was wearing a ball gag underwater, but it was still much easier to understand than Tom Hardy’s Bane. Upon starting the game from the intro screen, all of the Prime Directives were stated between loud jarring beeps as their text was printed on screen – apart from the ominous, classified fourth directive.

If you were happy to sacrifice some score and a bit of life, you could hear directive number two, “Protect the Innocent”, repeated back to you on the marksmanship levels by shooting the hostage to get at the ne’er-do-well behind them.

The main musical theme of the game had been put together by ignoring the bit that everyone instantly recognises at the start of the film, then recreating the lesser-known later bleepy bit, then playing it over the intro screen then on repeat throughout the game. There was an option to turn it off but I didn’t, and will still start humming it when performing menial tasks to this day. The crackling blasts of gunfire that accompanied all of RoboCop’s firearms sound ripped off from Galaxia and the “transition between levels” noise sounded like an effect of a robot powering down in a 1970s sci-fi, but that was all made up for by the sound of synthesised speech.

Now I come home from work and tell Alexa to put the lights and telly on, and she replies meekly “OK” (or “Sorry, I’m having trouble understanding you right now”). I’ll accidentally sit on my phone and Siri will ask how she can help me, while my children will set off a toy telling them that it’s a cute little bear which will help them count to five, or some shite. But unlike RoboCop, do any of these talking machines teach me valuable life lessons? No.

While flawed, RoboCop was still one of the best games I had for the Amstrad and was well worth the hours I put into completing it over and over again. Simple, explosive gameplay was made greater by a sense of getting a peek at the taboo film I was banned from watching. It really spoke to me on so many levels.