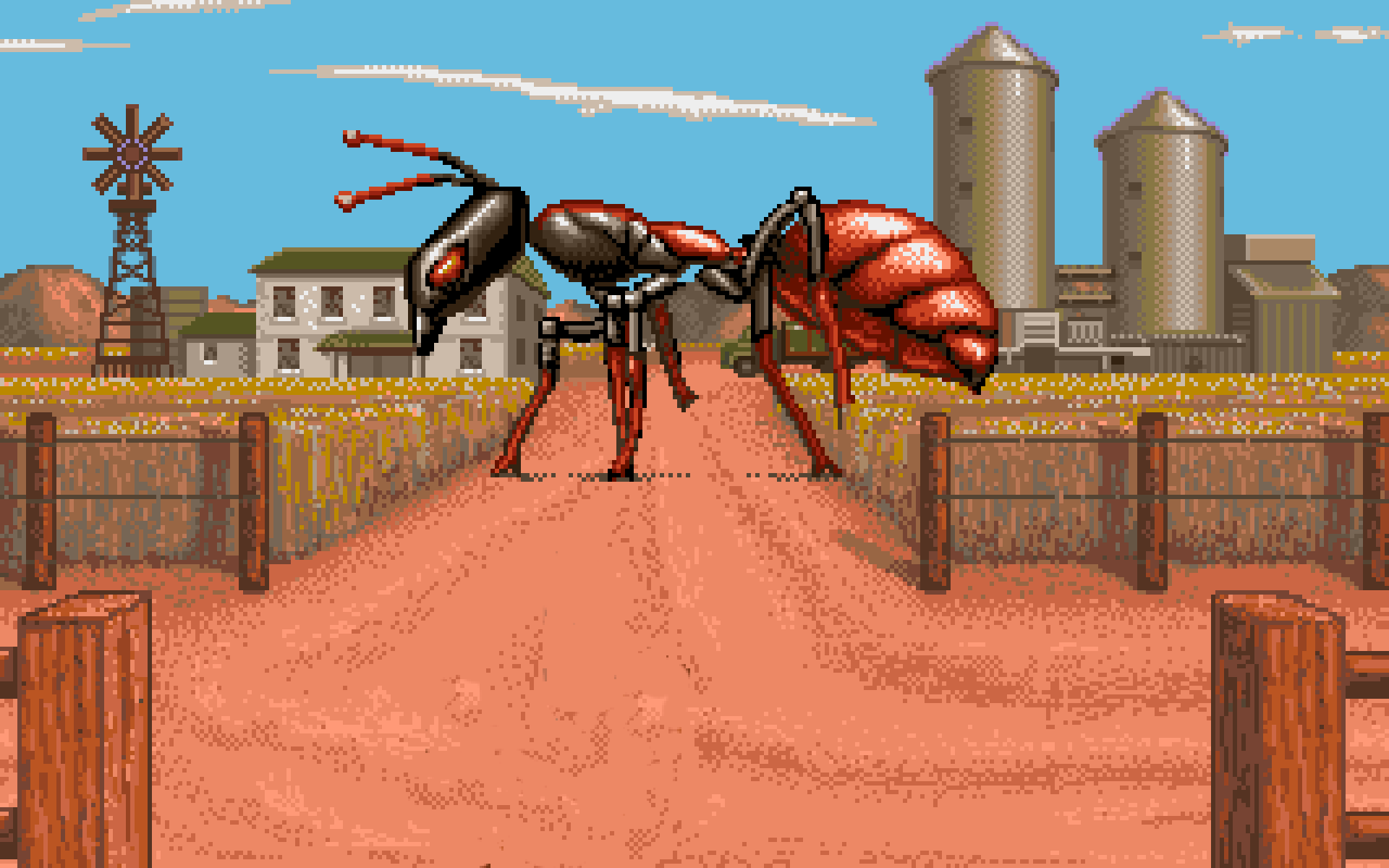 It Came from the Desert

How long have you waited to play a game? MrAbandonware tells the story of a 28-year journey, from seeing a magazine feature to finally playing It Came from the Desert – a “must-have game”.

A faint memory from 1989 has lingered in my mind to this day. The memory is not of playing a game itself, but of a feature I read in a computer magazine.

The featured game was a new release on the Commodore Amiga: It Came from the Desert.

I was in my early teenage years during the end of the 80s, and I was both an avid Commodore 64 gamer and a reader of fiction, equally happy in front of a screen or with my head buried in a good book.

My typically teenage bedroom had walls adorned with B-movie posters as I was, at the time, going through a phase of consuming any pulp science fiction I could get my hands on.

The ridiculous plotlines and adventures of clichéd heroes and villains were filling a significant portion of my reading time. It Came from the Desert was probably as pulp science fiction as you could get: a perfect link between my reading and my gaming. 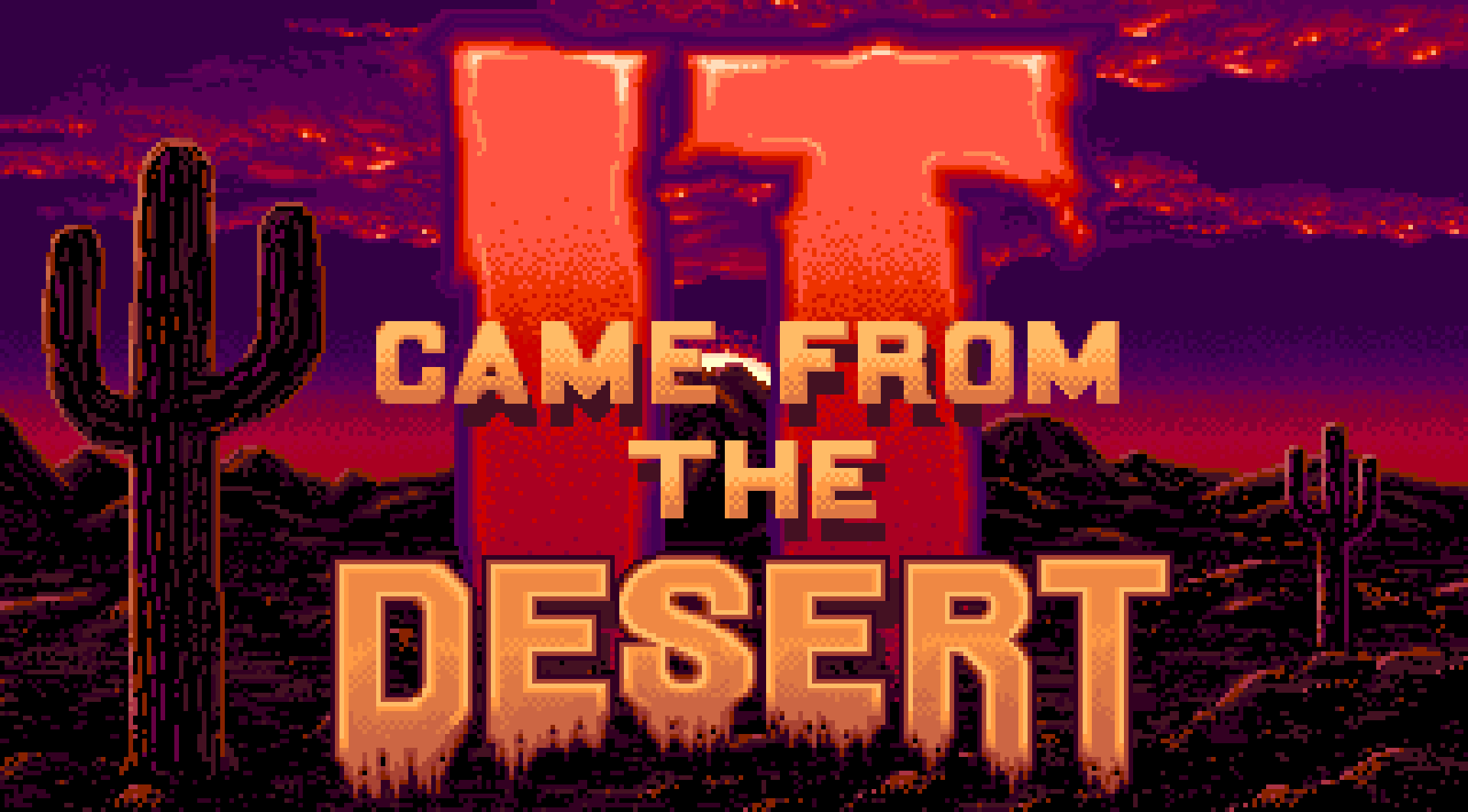 My first encounter – the one that led to the lingering memory – occurred one evening while taking a break from gaming. It was one of the regular, parentally enforced, breaks that came about during those years. I’d spent several hours battling my way through the Spanish Main as an English privateer in Microprose’s classic Pirates, and now my parents felt the need to take a break from the sounds of cannon fire, sword fights and Caribbean storms.

With the single household TV now requisitioned for the Six o’Clock News, I set about trying to find something to occupy my mind until the TV was free again. Like most teenagers, current affairs were not high on my list of interests, so I started idly flicking through the latest Commodore 64 releases found within the pages of several computing magazines my father had bought. This was a time long before the internet – it’s how new games were found back then, and it’s also how I first encountered It Came from the Desert, beginning a journey that took the best part of three decades.

In a bold attempt to produce a truly interactive experience, It Came from the Desert was developed by Cinemaware and followed on from its best-known and highest-regarded games, Defender of the Crown and Rocket Ranger. It was bold because it was an adventure game that focused on the narrative, and through the clever use of gameplay elements it avoided being a simple procession of linear scenes. It’s something that, by comparison, the glut of interactive movie and FMV releases that followed in the early ‘90s – such as Night Trap and The 7th Guest – would largely fail to do. 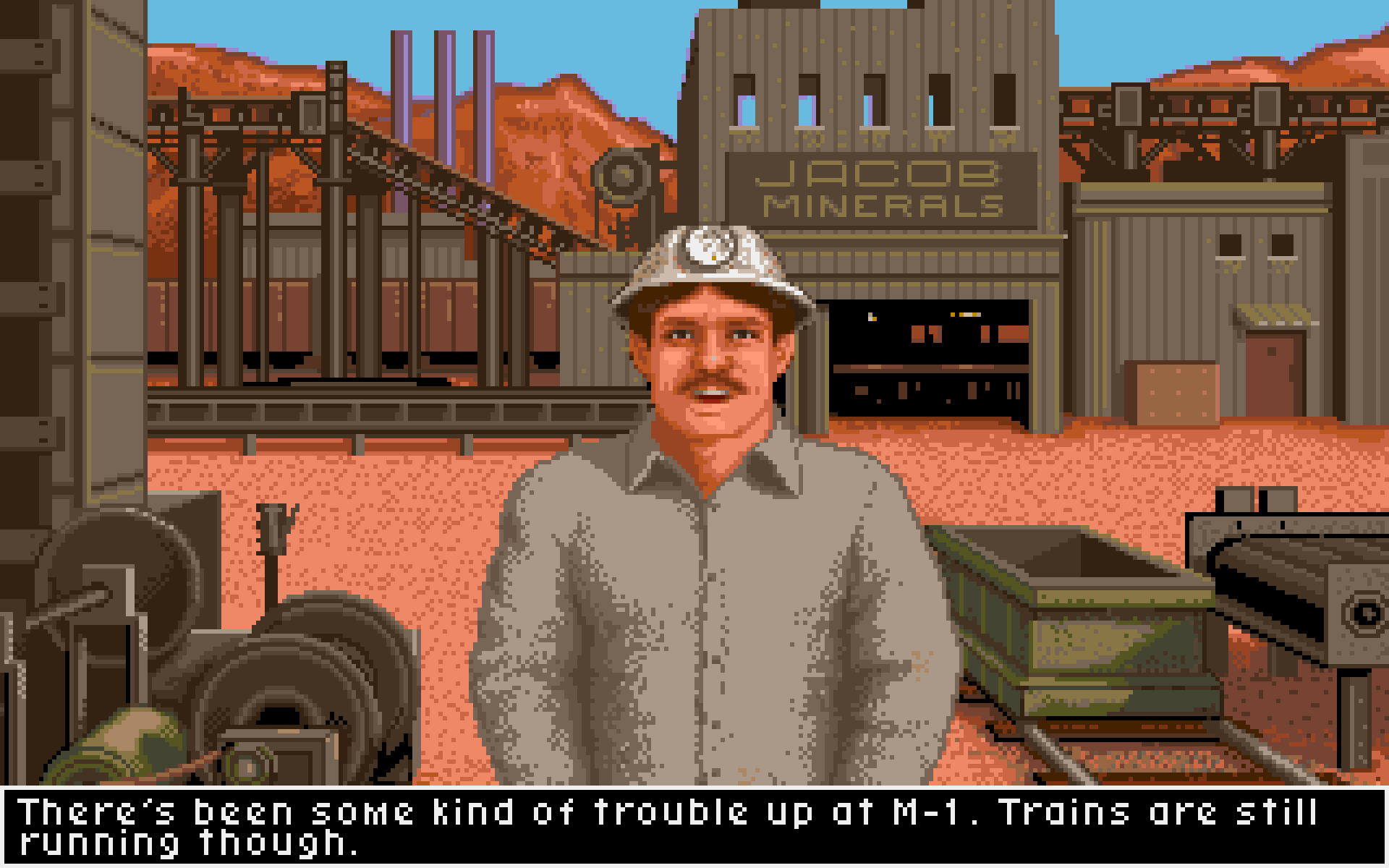 The magazine feature on this exciting title showcased the game in all its glory. As soon as I saw it, I realised it was a must-have game for a must-have computer. Crammed within just two pages were incredible screenshots of the Nevada desert, so realistic you could almost feel the heat. Tense encounters were promised with surly locals, glamorous women, and the type of oddballs you imagined could only be found in small-town America.

Then there was the standout moment: an unforgettable close encounter with a giant ant which almost jumped out of the page. I was captivated by what I saw. How could I not play this game? It was the greatest thing I’d ever seen.

Looking back, it was slightly underhand of the publication in question to show off a superior Amiga game in a Commodore 64 magazine. Sure, at that time, I was beginning to feel that I was almost ready to call time on my trusty C64 and venture into a brave new world that the Amiga promised, and here was this beautiful feature tempting me ever closer. However, it didn’t exactly happen like that – my C64 held on for a few more years. I eventually skipped the Amiga entirely and jumped straight into PC gaming and so It Came from the Desert eluded me, at least for the time being.

Fast forward to 2003. Cinemaware was long gone, bankrupt by 1991, in part due to losses sustained while developing FMV games for the TurboGrafx-16 console (including a remake of It Came from the Desert). Commodore and, by extension, the Amiga followed them in 1994. Both would see their names, trademarks and associated intellectual property change hands, but the new century had largely left them behind. As for myself, I was into the latter half of my 20s, and firmly established as a PC gamer. I’d lived and played through several decades’ worth of games, and this had begun to cultivate a nostalgic longing for the titles and platforms that gave me the passion for gaming in the first place. 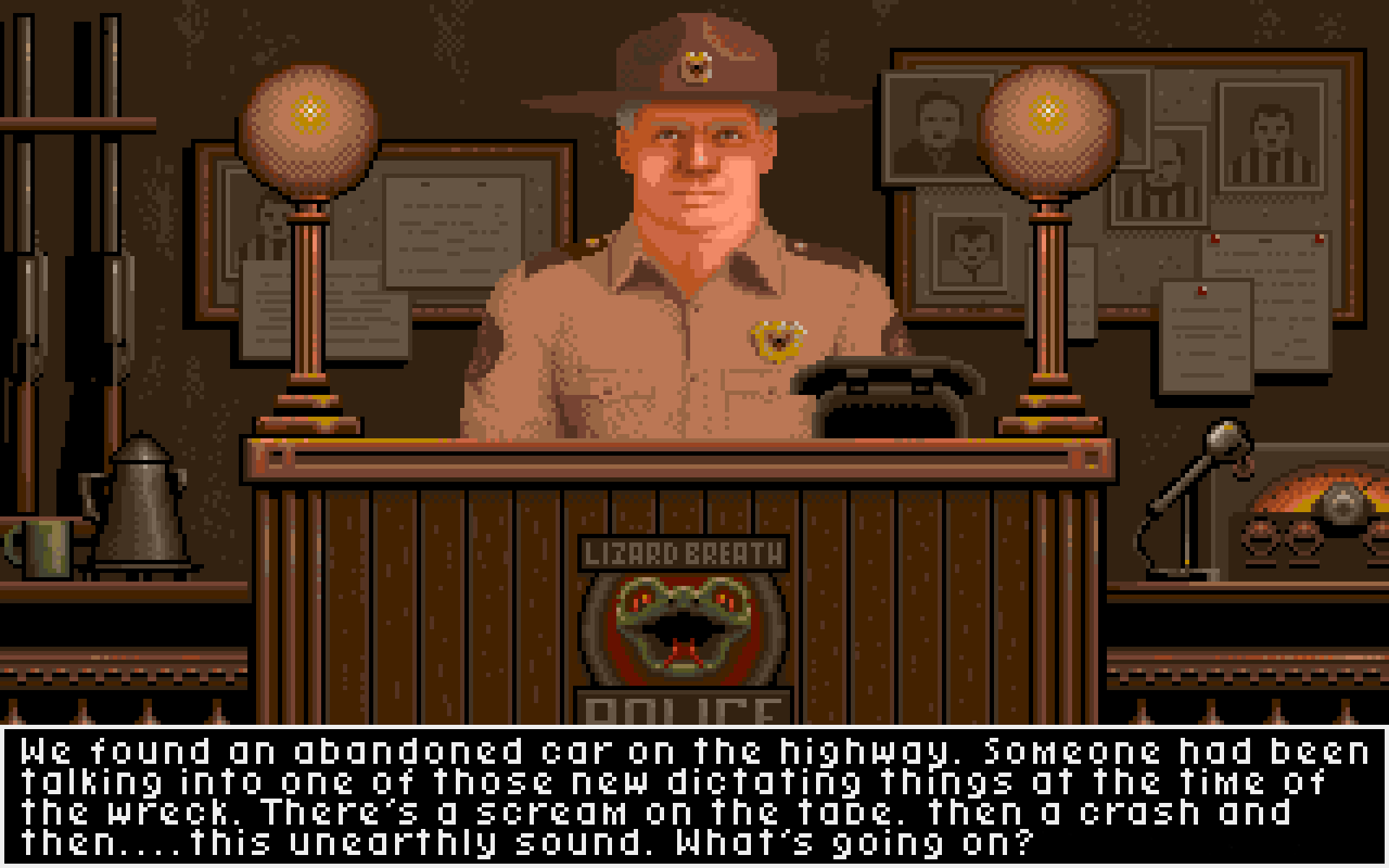 It was through this longing that I began to venture into the world of abandonware. The term abandonware came about at the end of the 1990s and was loosely used to describe games for which support had been discontinued, and for which copyright was no longer actively enforced. These were games that were no longer current, but still of interest to people like me.

During a visit to what was one of the leading abandonware sites at that time – Home of the Underdogs – I got a reminder of that evening back in 1989. In the adventure games section, a copy of It Came from the Desert was listed as abandonware. Initially, I was taken aback; it had completely passed me by that it had ever been released on the PC. I later learnt that this was due to it being released in 1991, which was my final year of owning a Commodore 64 prior to moving into the world of PC gaming. With so many new games such as Monkey Island 2, Ultima 7 and Doom now available, I simply lost track of older delights.

I downloaded it straight away. Well, I say straight away; it took me quite a while to get hold of a few megabytes on a dial-up connection. With the game installed, it was finally time to catch up on what I’d missed all those years ago. The game loaded, and… It was nothing like I remembered, or expected.

The 16-colour EGA graphics actually looked worse than the (older) Amiga version. EGA was old technology in 1991, so why had the developer chosen it over VGA? The sound and especially the music screeched out of the speakers to the point where it actually started to become uncomfortable to listen to. To be fair, It Came from the Desert’s gameplay wasn’t too bad, except for one thing: it seemed impossible to beat the giant ants with your pistol, and it was a crucial part of the game. 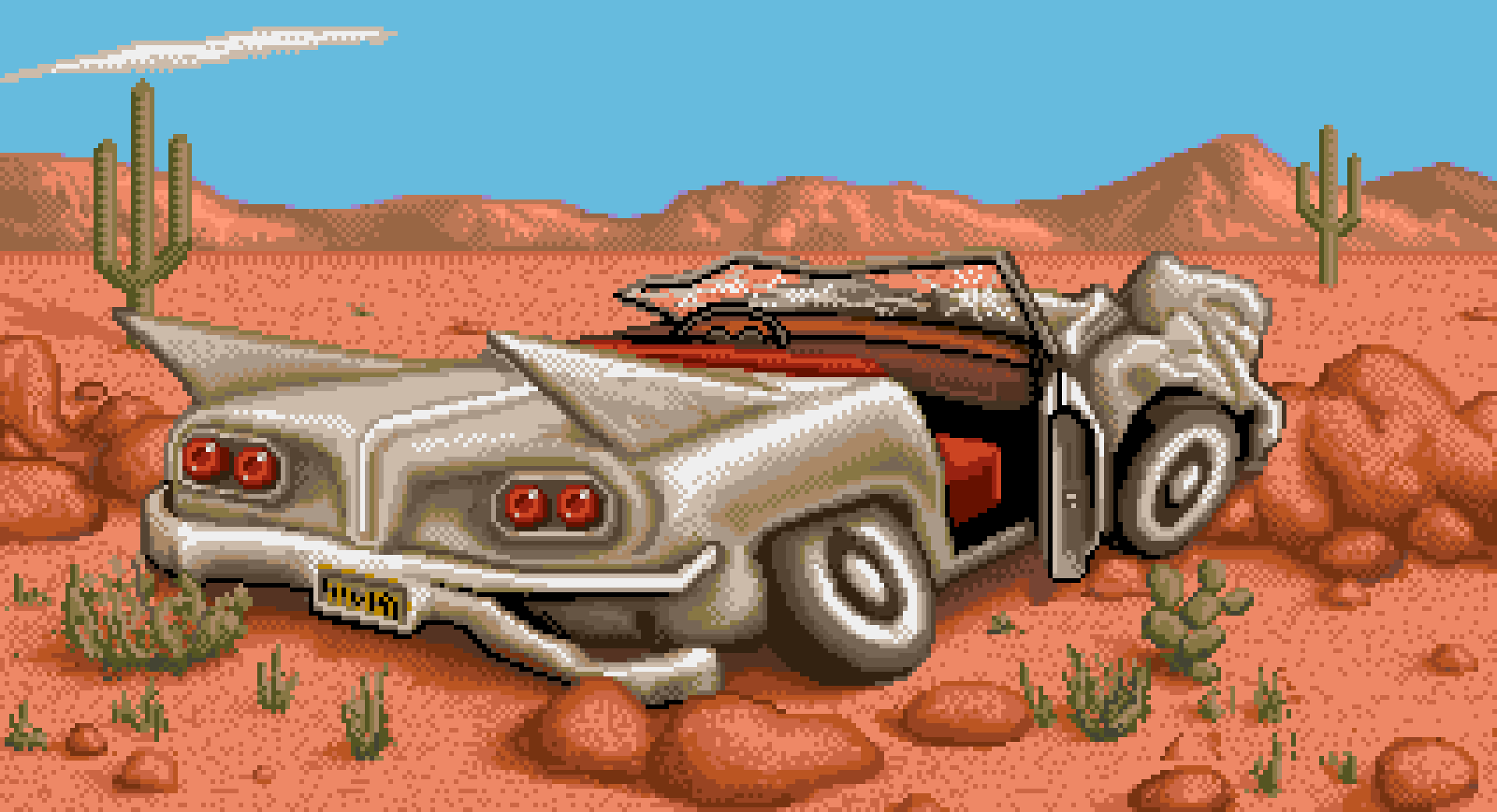 I was dismayed. How could it be so bad? This particular version had been developed by Level 9 Computing, a British company which had been very well-known throughout the 80s for its text-based adventure games. Like Cinemaware, it had been going through difficult times in 1991, and this port was a failed last-gasp attempt to stay in business, and it showed. My hopes dashed, I put it to one side and moved on.

By 2017, I was approaching middle age. My interest in old games hadn’t dwindled; I was playing more than ever. Abandonware had become a passion. I now saw it more than just a means to relive childhood memories. For me, it was a form of activism alongside my growing interest in digital preservation and anti-obsolescence technologies. 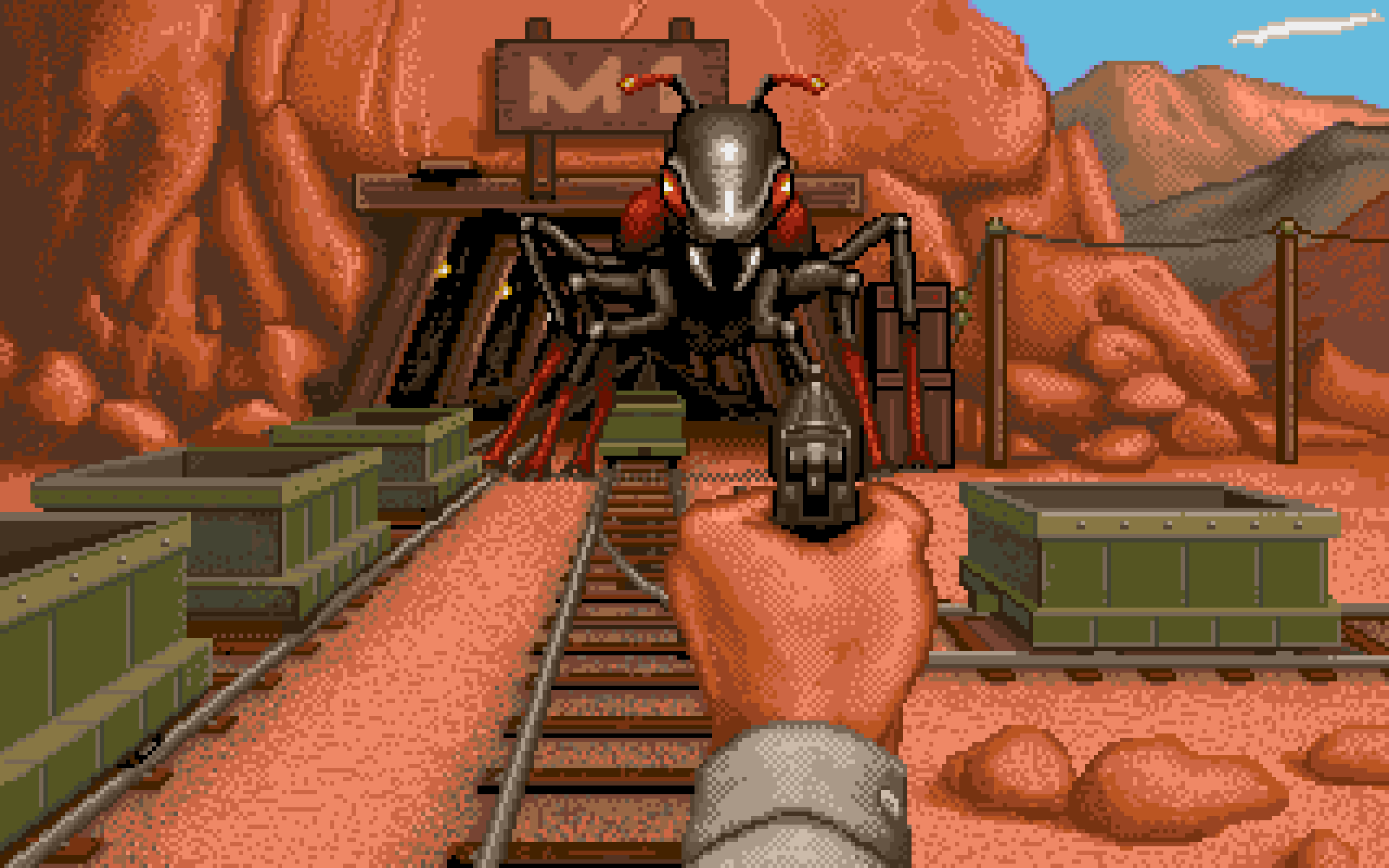 A key component of anti-obsolescence and digital preservation is emulation. One day, while testing various emulators, I thought back to that “must-have computer” from 1989. Then I remembered the “must-have game”. It was terrible on the PC, but curiosity got the better of me. For old times’ sake I searched around and soon I had a working Amiga emulator and copy of It Came from the Desert.

The ‘Amiga’ clunked into action. I was amazed. The introduction once again opened with a scrolling desert scene, beautifully coloured. Then, there was a meteor strike accompanied by the most incredible dark, foreboding music, which made the hairs on the back of my neck stand on end. This was so much better than the PC’s attempt at an introduction. Out of nowhere, a deep voice proclaimed:

“The desert, unchanged for millions of years, yet witness to a biblical
prophecy come true that one day the meek shall inherit the Earth.”

I’d finally found what I’d been looking for

The majority of the game is viewed from a first-person perspective, putting you in the shoes of Dr Greg Bradley, a newly arrived geologist in the fictional Nevada town of Lizard Breath. You begin to investigate several strange events including sightings of giant ants following the meteor strike depicted in the introduction. There is, however, one problem: it seems the residents of 1950s Nevada are tired of experts, and so it falls on you to find enough proof before embarking on a quest to save the world. 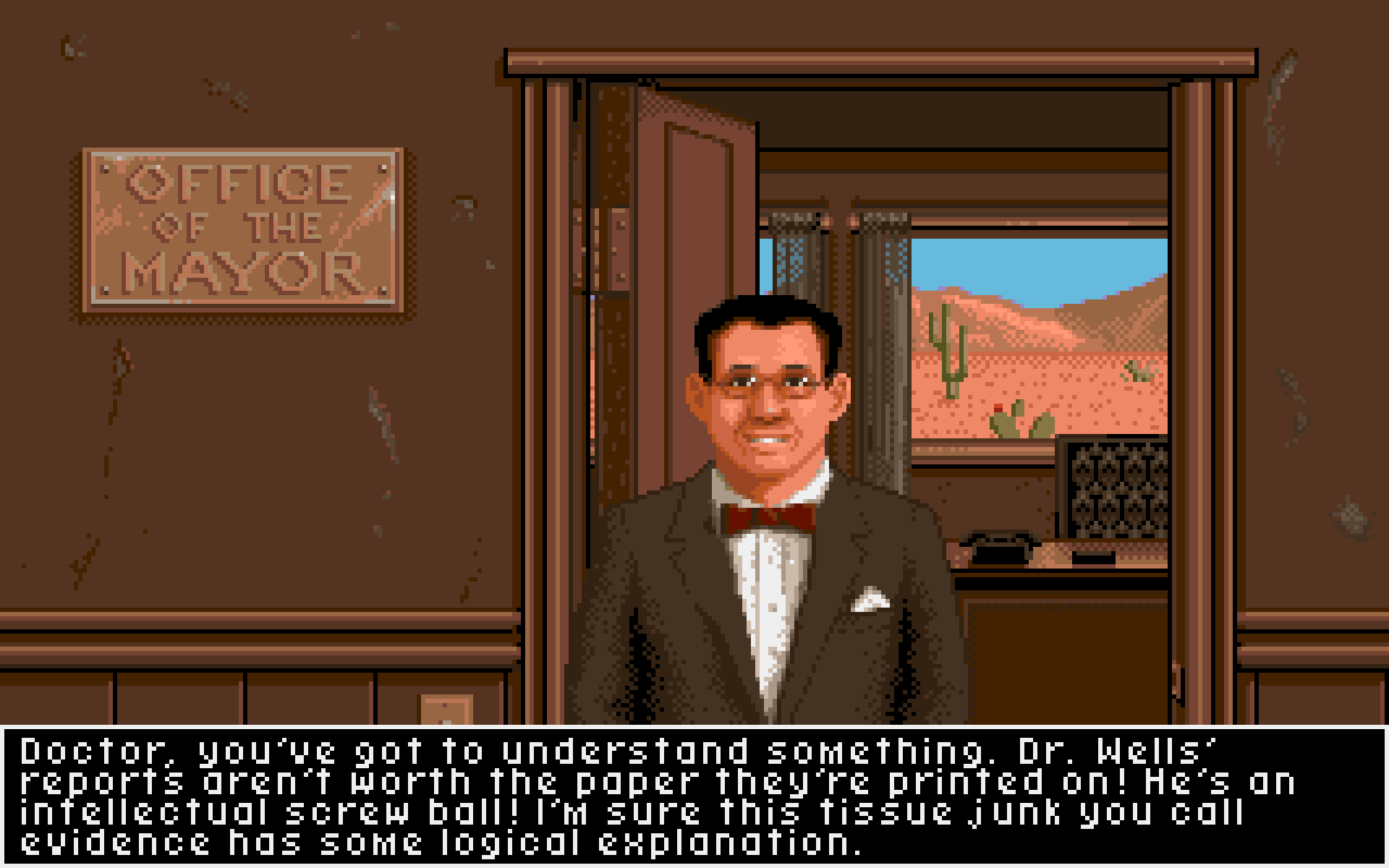 The largely static first-person views of locations and interactions with people – as well as the locations themselves – resemble those of earlier interactive fiction games, but with a key difference. The in-game time passed from the moment you started playing, which gave a feeling of being within a living world.

On top of that, there was an additional non-linearity that came from the fact that people and events occurred in various locations at different times, independent of your presence at those locations. In a more static linear game environment, this would inevitably lead to dead ends, but here there were multiple opportunities to follow the same leads, meet the same people, just by going different routes. The combination of these elements helped promote the feeling of a world moving around you, rather than you just moving through a predetermined world.

In order to actually move between locations, the game switched to a map of Lizard Breath and the surrounding area, complete with a clock and details of how long the journey between locations would take. The final element of the game was the interactive mini-games, which varied between aeroplane flights to gunfights with the giant ants themselves and, unlike in the PC version, it was possible to beat them (essential if you are to progress to a good ending).

All the while, the foreboding musical score continued and the clock continually ticked along. You had just 15 days game time before the ants, in true B-movie form, took over Lizard Breath – and then, presumably, the world.

Even today, It Came from the Desert still continues to have an impact, regularly appearing in lists of the best Amiga games. Beyond, there really has been little like it on any platform that I feel can compare it to. It seems to me that Cinemaware made a unique and timeless gaming experience.

It Came from the Desert brought 1950s America to life with a truly interactive B-movie experience; it’s a timeless classic that has probably never been matched, and still feels as fresh today as when it was first released.